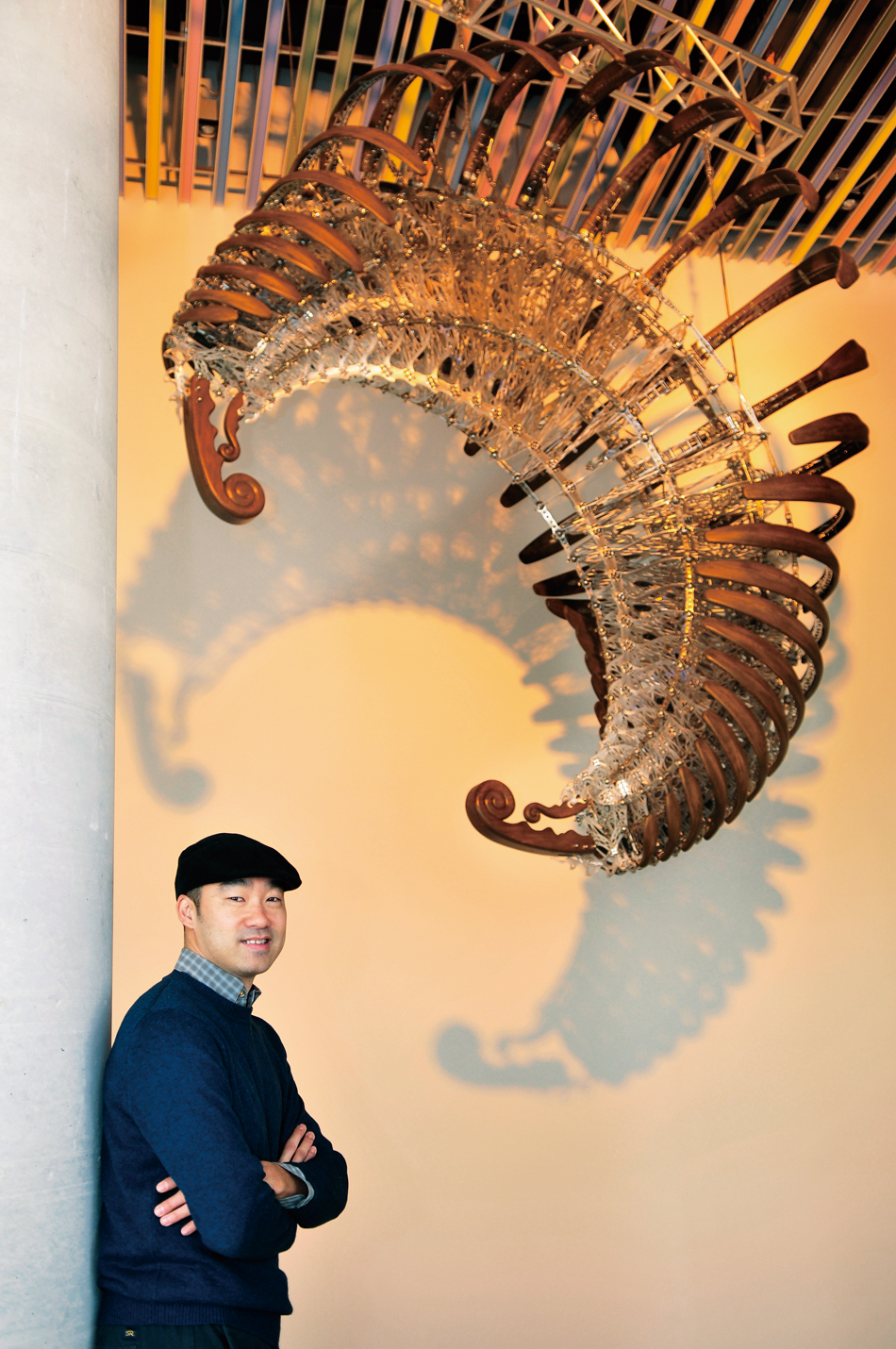 Visitors to the new National Museum of Modern and Contemporary Art (MMCA) in Seoul will stand, momentarily suspended at the sight of what seems like a gigantic, flying trilobite from afar. Closer up where you can see it hanging from the ceiling, your amazement doesn’t abate while watching the wooden wings (or shell) on its five-meter high metallic body flutter in a strangely convincing fashion. Many halt, silently staring, half-expecting it to take off any moment. This awe-inducing mechanical creature, named Opertus Lunula Umbra (Hidden Shadow of the Moon), was created by U-ram Choe, one of Korea’s first kinetic artists. He held his first private exhibition 15 years ago in his late twenties, and has since led an active career on the domestic and international art scenes,  In an interview with SEOUL magazine at a bench before Gallery 5 at MMCA, where the hulking sculpture loomed over our heads, the tall and lanky Choe scooped down to apologize for being three minutes late. He said he’d been up all night working on a new piece and broke into a shy yet unhesitating smile that made his boyish face appear younger still.

FINDING A WAY TO COEXIST

Choe’s works are always machines, but they are sometimes entertaining, usually beautiful, and often evoke an otherworldly, almost sacred feeling. In a world where machines have induced as much fear as amazement from the beginning, his affectionate approach is unique in its lack of dissonance. He says he tried the dystopian perspective. “I think the threat posed by machines is very real, and that’s what my early exhibitions were about. But I really loved machines—I had the best time taking things apart and watching nature documentaries from my earliest memories, and I never grew out of it. I felt torn and self-contradictory. And the fact is, machines have long been indispensable in human life. To say we should somehow stop machines felt contradictory.”  “A better option was finding a way to coexist. Someday these machines will have life. I’m completely certain of it. Why? I think all corporations and scientists are all essentially trying to overcome God. There’s that desire to create a life with our own hands and that product will also be very profitable and change the future. Machines do more and more things every day. My moving sculptures, or mechanical art, are also experiments through which I express different, unintuitive things with a machine. They’re usually my interests and for the last decade or so, I was deeply fascinated by religion and mythology; they say so much about people. That’s probably why you mention sacredness in my works.”  “Whatever the particular theme is, in my work, I get to do over my fantasies that I couldn’t quite materialize as a boy. Basically, I’m still a robot and dinosaur-crazy kid who now has the facilities and resources to realize things.” Many of Choe’s works, including this one, resemble insects, another boyhood fixation. But the materials used for his works are wood, metal, plastic, glass and a lot of lighting. With all the “juice” gone, what’s left is the frames of the insects, allowing appreciation of their structural beauty without the instinctive revulsion that people experience against the species. Was such exclusion intentional, a conscious choice? “When I’m at work, I think of whatever I’m making as a real organism. So while the juice, as you say, might not be actually there, it’s not a conscious exclusion. I work with mostly hard metal, but in my mind, this is a living organism and all the parts work together like they do in an organism. It’s the limits of the material that stops me from expressing quite that far. But in a way… living things have beauty, especially when they can’t harm us. Insects can harm us by contamination and that’s probably what was on your mind when you say juice is our source of fear. Maybe by recreating insects in a different material, I place them in a different context and you can see the creatures we’ve lived with for millions of years in a different light.”

ART IS IN THE PRESENT

The scale of Choe’s art makes one wonder what he’d do if he had complete access to resources. If not restricted by funding and technology, would he really make the Lunula Umbra sail through the spacious galleries of MMCA Seoul? What might his magnum opus be? His answer is simple: he doesn’t know yet. “I do want to put together some sort of stage performance these days; it could be a musical, it could be something else. There’s nothing specific. It’s just an idea I’m playing with. But the truth is, I don’t try to look too far ahead. I feel that if you really dedicate yourself to your current interests or projects, you always have something to show for it. So while I constantly have new interests and think about new projects, I’m more focused on the near future than some distant ambition. Think about what you want to do right now, not your ultimate achievement decades away. Something so far and so abstract can be debilitating. That’s the advice I give to my students: thinking ahead is good but you need to take steps in the present. If there’s something you want to do right now, just give that all you have. It usually leads you to somewhere else—your dream will take more shape.”