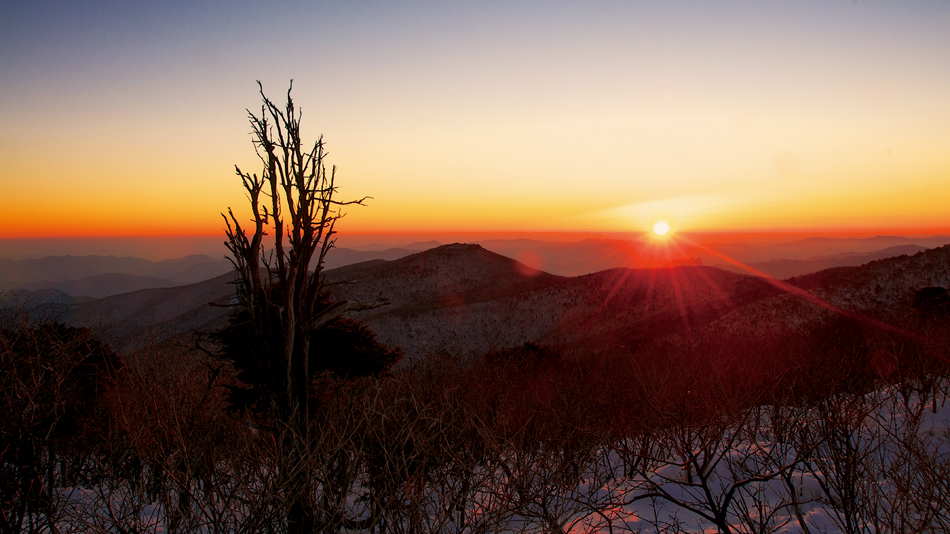 Naksansa Temple is one of just a handful of Korean Buddhist temples overlooking the sea. Located in the coastal town of Yangyang, the temple is a place to view truly inspiring sunrises over the East Sea, especially from Uisangdae Pavilion. Naksansa was founded in 671, but history hasn’t been especially kind to it. The temple has been destroyed and reconstructed several times, most recently following a devastating 2005 forest fire that incinerated much of the monastery.

STAY> The swankiest place on the beach is the appropriately named Naksan Beach Hotel (T. 033-672-4000), located on a hillside overlooking the sea right next to the temple. Rooms seaside offer great views of the sunrise. There’s a seawater sauna, too.

DO> Naksansa offers Templestay programs, in which a guest can spend the weekend as a Buddhist monk.

SEE> The 15-meter-tall statue of Guanyin, the Buddhist bodhisattva of mercy.

One of the nicer spots to spend a winter weekend in Korea is Uljin. A small fishing community three hours away from Seoul by bus, Uljin’s quaint provincial feel is as relaxing and reinvigorating as it is disarmingly charming. From the beautiful vistas of the East Sea, backed by the majestic peaks of the Taebaek mountains, to soaking in both the water and splendid scenery in the outdoor baths of Deokgu Spa, the county provides plenty of ways to recharge both mind and spirit.

EAT> Uljin is all about snow crabs. Head to the waterfront around 9am to see the daily crab market, where fishermen and restaurateurs haggle over the morning’s catch.

STAY> One of the spa resorts is recommended.

DO> Soak your ills away at either Baekam Spa or Deokgu Spa. Baekam is Korea’s only radioactive sulfur spa. Its waters can alleviate nervous disorders, arthritis, arteriosclerosis and stomach problems.

SEE> Bulyeongsa Temple is not only a lovely Buddhist temple in its own right, but also sits at the bottom of the spectacular Buryeongsa Valley, a twisting river gorge cutting its way through the Taebaeks to the East Sea. The road along the gorge is also gorgeous.

This is one of Korea’s oldest and best-known hot spring resorts, with a history that dates back some 1,300 years. So highly regarded were Onyang’s medicinal waters that they served as the sanitarium of the kings of the Joseon Dynasty; even the beloved King Sejong the Great came here to bathe and recover from illnesses.

Being a spa town, Onyang is home to a good many independent spas, but many visitors simply choose to bathe in one of the more than 100 hotels, which often have their own spas. Certain rooms also come with their own baths.

EAT> Set by the Yellow Sea, Asan is famous for its eel, usually served grilled (jangeo gui). One whole “town” (a road, really) is full of eel restaurants in the township of Inju-myeon.

SEE> Asan is home to Oeam Folk Village, which was formed during the Joseon Dynasty five centuries ago.

Rugged mountains, deep blue lakes and rushing rivers—these are what the county of Hwacheon is all about. Just getting there is itself an adventure, with buses following a winding route along the craggy banks of Lake Chuncheon.

For most of the year, Hwancheon is a little more than a sleepy mountain town (albeit a beautiful one). In January, however, its frozen rivers host one of the nation’s most popular winter festivals, the Hwacheon Sancheoneo Ice Festival (Jan 4—26). Dedicated to the sancheoneo, an indigenous freshwater mountain trout, the event features as its signature event ice fishing. Equipment is on hand, though ice fishing barehanded is also recommended. Plenty of other winter activities are going on, too, like sledding and skating.

EAT> Hwacheon is known for its delicious fish, often served raw. Myeongga (033-442-2957), not far from Hwacheon Bus Terminal, is a great option. Raw fish can get expensive, though. Hwacheon Eojuktang (033-442-5544), located in front of Hwacheon Hydroelectric Power Station, does a mean eojuktang (spicy fish stew) on the cheap.

STAY> About 20 or so motels and Korean-style inns (yeogwan, 여관) in the town.

DO> Go ice fishing. For those with the stomach and endurance for cold, try catching trout barehanded, too.

SEE> Really off the beaten track is the Peace Dam, a rather curious piece of Cold War history.

At one time, the county of Cheorwon-gun was a flourishing railway spot. In the Korean War, however, the county was virtually erased from the map after the brutal Battle of the Iron Triangle. All that remains is eerie ruins.

Cheorwon-gun’s most famous ruins are the Nodongdangsa, the former regional headquarters of the ruling Workers’ Party of (North) Korea. The gutted Soviet-style office is scarred by countless bullet holes and shell marks. Across the Civilian Control Line lay more ruins and Cheorwon Peace Observatory, which offers breathtaking views over this sector of the DMZ. In winter, the area north of the Civilian Control Line is a great place to see migratory birds, particularly cranes.

EAT> A few good places to eat are around Goseokjeong Pavilion.

STAY> Explore the Third Tunnel of Aggression, a North Korean-dug tunnel under the DMZ.

DO> The river gorge around Goseokjeong Pavilion is one of Korea’s most scenic natural spots.

SEE> Most folks do Cheorwon as a day trip.

FYI> To see the sites across the Civilian Control Line requires the services of Hantangang River Tourist Agency (T. 033-450-5558).

GO> Buses to the Nodongdangsa run from Sintan-ri Station, the closest whistle-stop to the DMZ. Transfer to a commuter train at Dongducheon Station (Line 1) to get there.

A Busan landmark, this is Korea’s most famous fish market. Housed in a distinctive, seven-story building, this is the place to go for raw fish. The electric, noisy and smelly venue has an infectious energy, and the first floor is where merchants sell fresh fish, shellfish and other slimy beasts of the sea, much of them still alive in tanks. Get here at dawn to witness the daily auction of the day’s catch, fresh off the boats. The second floor mostly has raw fish restaurants. Select a fish and then get it gutted, skinned and sliced to perfection right on the spot. A roof garden has great views of the harbor.

EAT> A specialty of the stalls around the market is kkomjangeo, or charcoal-roasted hagfish marinated in a spicy sauce. Fun fact: the slimy, eel-like hagfish is the world’s only living animal with a skull but no vertebrae.

STAY> Take in the views of Busan harbor from the roof garden.

DO> The especially atmospheric alley right next to Yeongdong Bridge has ramshackle homes that used to be a village of fortune-tellers. Refugees would come here to seek solace in the days of the Korean War.

SEE> Most of the high-end places are in the Haeundae area. Cheaper accommodations are found around Busan Station and the city’s major bus terminals.

The Korea Railroad Corporation, or KORAIL, runs O- and V-Train routes through the scenic mountains of the central region, also known as “snow country.” The O-Train course (257.2 kilometers taking about five hours) connects Seoul with the cities of Jecheon, Taebaek and Yeongju, deep in the heart of the Taebaeks. The observation car offers the best views. The V-Train course (27.7 kilometers) connects the stations of Buncheon and Cheoram along a spectacularly steep section of track. One-day tickets (O-Train: KRW 18,900, V-Train: 8,400) and multi-day passes are available.

The park’s mountain is big but not a particularly difficult one to climb; the path is blissfully smooth. From the upper reaches, the views of the surrounding Taebaeksan range are breathtaking. Bring a flashlight and get to the peak early to see a spectacular sunrise.

In winter, the mountain receives heavy snow, which makes the climb even more scenic. The snow encrusts the windswept trees and bushes; these “snow flowers” produce a fantastic and almost  otherworldly landscape. This time is also when the park hosts the Taebaeksan Mountain Snow Festival (Jan 17–26).

In addition to the scenic splendor, Mt. Taebaeksan is worth climbing for its high spiritual and cultural significance. Korea has many mountains and peaks of spiritual importance, but this mountain is one of the most sacred. According to legend, this was where Hwanung, the son of the king of heaven, came down from heaven to found his own sacred city and teach people how to live.

STAY> View the sunrise from the peak of Mt. Taebaeksan.

DO> Near the peak are ancient yew trees that cut a surreal silhouette against the morning sky.

SEE> The nicest place to stay is High 1 Ski Resort (T. 033-590-7700), which, incidentally, is also home to the country’s lone casino Korean nationals can enter.