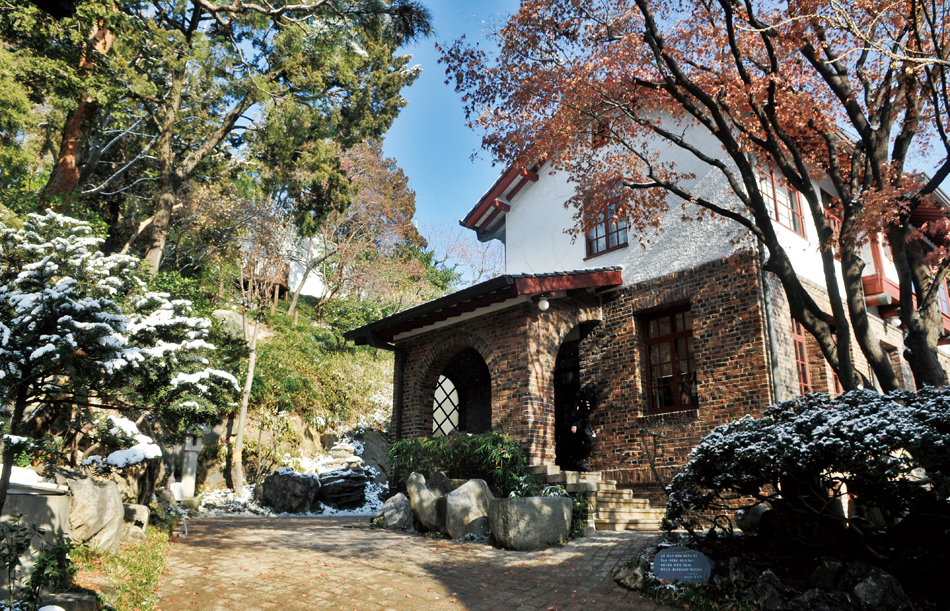 The newest addition to the list of historic houses in Seoul open to the public is the Jongno-gu district’s Pak No-soo Art Museum in the trendy neighborhood of Seochon. Built in 1938, the house is a rare example of a home that combines Japanese and Western design and includes Korean and Chinese motifs. Yun Deok-yeong (1873–1940), a notorious pro-Japanese collaborator in the colonial period (1910–1945), built the house for his daughter on the grounds of his estate. The home later had as its owner Pak No-soo (1927–2013), a leading 20th-century painter specializing in ink and color. Shortly before his death, Pak donated the house and 1,000 works of art to Jongno for use as an art museum. After restoration work was done in early 2013, the museum was opened to the public in September that year.

Located just off a busy street in Ogin-dong, one of the many small districts, or “dong,” that make up Seochon, the house stands out from others in the neighborhood. The exposed round rafters evokes images of a hanok, or a traditional Korean-style house, but is also reminiscent of an English Tudor-style home in a leafy suburb of a big American city. Because of its uniqueness and historical value, the residence was designated a Seoul City Cultural Property in 1991.

The house was designed by Park Gil-ryong (1898–1943), the leading Korean architect of the Japanese colonial period. He worked for the colonial government and was familiar with Western-style houses popular in Japan at the time. Park wanted to improve housing in Korea, and experimented with various ideas in this house. The shape of the roof and roof tiles reflect Japanese influence. The architect included a number of Korean elements, such as an ondol, (heated floor) room and, of course, the exposed round rafters outside. Three fireplaces used for heat are in Western-style rooms with wooden floors, making it one of the few houses in Seoul at the time with Korean and Western-style heating systems. The Chinese influence is seen through the reddish trim on the windows. The house is surrounded by trees and stroll gardens with diverse plants.

Pak, who moved into the house in 1973, had deep roots in Seochon. Lee Sang-beom (1897-1972), his teacher and mentor, lived in a hanok in neighboring Nuha-dong and had his studio next door. Pak graduated from the College of Arts at Seoul National University in 1952 and rapidly rose to fame after winning several prestigious art awards. In 1956, he joined Ewha Womans University as a professor and later moved to Seoul National University in 1962. He remained active in the art world until his health declined in the early 2000s. A retrospective of his works was held in 2010 at the National Museum of Contemporary Art at Deoksugung Palace. Through his paintings and teaching, Pak played a critical role in helping ink-and-color paintings of the Korean style remain a vital genre at a time when Koreans were abandoning tradition in favor of all things Western.

The Pak No-soo Art Museum held its inaugural exhibition in fall 2013 and future exhibitions will focus on the aspects of the late artist’s life and work. Important rooms in the facility are used as galleries and have been carefully preserved. The house is an excellent example of a preservation project that has limited renovation to a bare minimum.

GO> The museum is a 15-minute walk from Gyeongbokgung subway station (Line 3) and the route from the station is clearly marked.