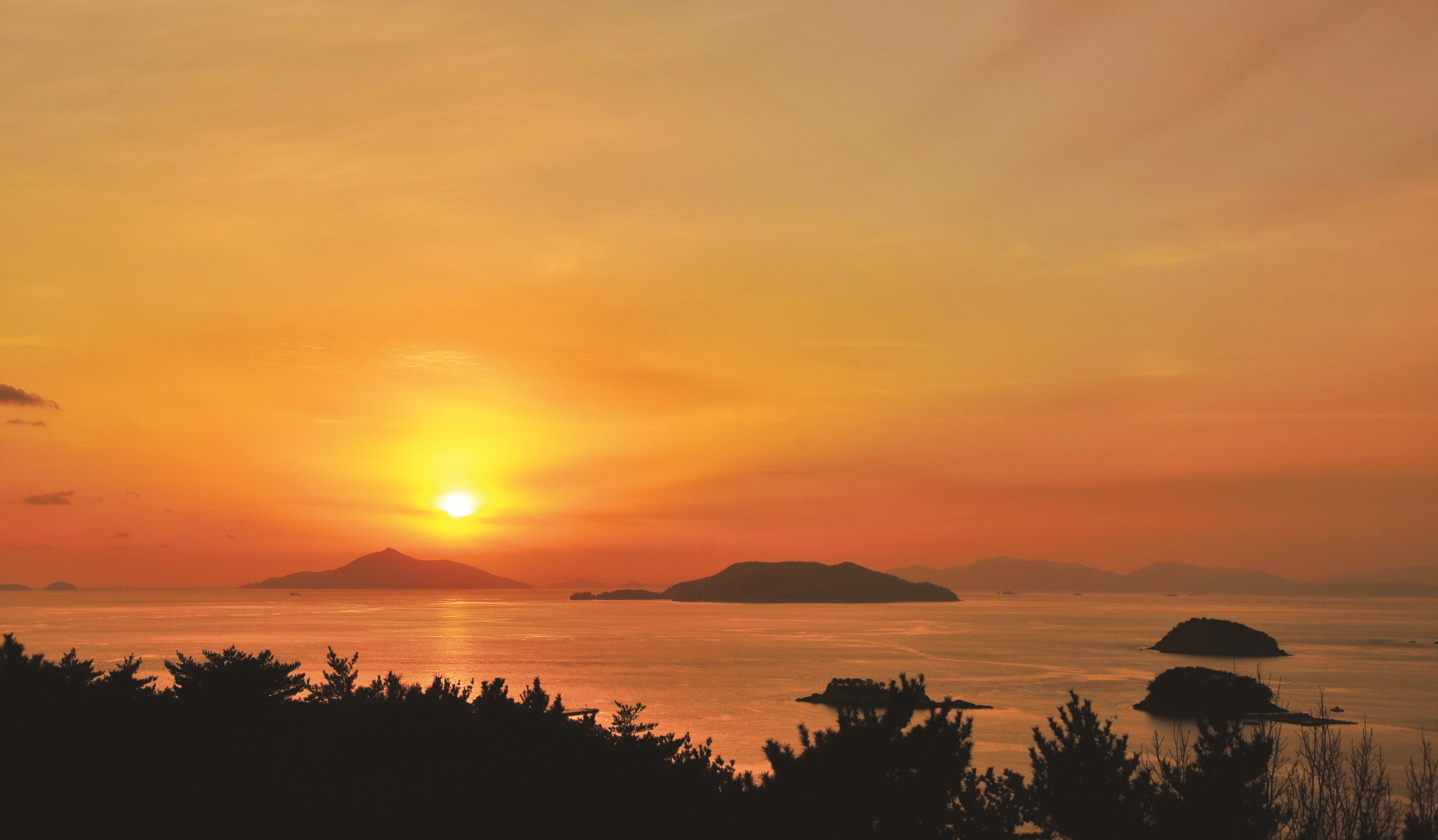 Tongyeong | 통영
Meeting spring early in the “Naples of Korea”

Situated on the small , mountainous Goseong Peninsula at the southern tip of Korea, Tongyeong lies right in the heart of Hallyeohaesang National Park, making it home to some of the country’s most pristine natural scenery.

Often referred to as “The Naples of Korea,” the quaint seaside city of roughly 135,000 people and exactly 151 islands is known for having been home to several respected artists, poets, writers and composers. And the maze of waterways just off her shores has witnessed some of history’s greatest sea battles.

With several prominent international events over the course of the year, including the Tongyeong International Music Festival (Mar 22—28, 2013), the Korea Triathlon in October and the Tongyeong Art Festival in both May and October, Tongyeong offers a great place to get away from Korea’s buzzing metropolises for a nice spell of R n’ R and a great sample of Korean seaside culture.

Lay of the land

The city’s unique layout along both sides of the Tongyeong Canal offers it a mountainous natural barrier against the south sea winds, making it one of Korea’s warmest winter getaways.

The canal, which was converted from a shallow strait by the Japanese in 1932, divides the city into its two most prominent land masses spanned by the picturesque Tongyeong and Chungmu bridges which offer dazzling views when lit up beneath the evening skies.

Though not nearly as picturesque, a far more interesting way to get from one side of the canal to the other is to take a stroll through the Haejeong tunnel, which was also constructed by the Japanese in 1932, and holds the distinction of being the first underwater tunnel in Asia.

In general, Tongyeong is a small city, so your best bet for getting around is taxi rather than the Korean language-only bus system. Even a taxi trek from one end of the city to the other will run you little more than KRW 4,000.

Long before the Japanese made their mark on Tongyeong’s waterways, their navy was in and around the area doing battle with legendary admiral and naval strategist Yi Sun-sin during the seven-year Imjin War (1592-1598).

While the Korean army was being overrun ashore, Yi’s brilliant tactics completely eliminated the Japanese navy as a factor in the war. In four campaigns, Yi fought 23 naval battles without a single defeat. In two of his most legendary engagements Yi captured or sank 59 of 73 Japanese warships at the Battle of Hansan and later forced the retreat of 333 enemy ships with only thirteen Korean warships at the Battle of Myeongnyang.

Tongyeong offers a wealth of attractions to satisfy nearly any taste. While English info is difficult to come by, even at the tourist centers, the city has put together a great bilingual tourist map to help you get around with relative ease.

If you arrive by intercity bus, you can hop on any local bus outside the station (with the exception of 650 or 652) to get down to the waterfront. Once there you will find yourself in a prime location to hit a number of the city’s offerings, such as the replica of Admiral Yi’s iron-clad “Turtle Ship,” located right across the street from the Jungang traditional market.

Right off the waterfront, spanning a small foothill just behind the Napoli Hotel, is the Dongpirang Wall Painting Village. There you will pass through a maze of murals painted on the walls of small interconnected alleyways heading up to the top. Lee Young-ju, a chemistry major from Kyungwon University in Seoul, was visiting Tongyeong for the first time and was most impressed with Dongpirang. “It is great to see all of the paintings, I really enjoyed that most in Tongyeong, and also the view from there.”

A 10-minute walk from Dongpirang is Nammangsan Sculpture park, where sculptures by various international artists are scattered  along a scenic natural trail that winds around the face of the hill.

If you’re planning a short stay in Tongyeong, there is the city bus tour. The all day excursion takes you to the 400-year-old Changnyangmyo Shrine, the Haejeong tunnel, the local history museum, Mireuksan Cable Car and includes a ferry ride out to Hansan-do. The bus departs once a day at 9:30am in front of the Napoli hotel on the waterfront and returns back at 4:30pm. The cost is 15,000 won. You can get more info by calling 055-645-8588.

A major draw of Tongyeong is the numerous offshore islands, many of which can be reached by several ferry services at the central terminal. According to Lee Keun-byul, ecoguide for the national park system, the most popular island destination in Tongyeong is Somaemul-do.

“Around 390,000 tourists visited it last year,” says Lee. “When you reach the top you can see an amazing view of Tongyeong and the other islands.” Somaemul-do is actually two islands, connected by a land bridge that can be traversed at low tide, so check tide times beforehand if you want to make the walk across.

There are simply too many islands to see over the course of even a few days. A good choice, which offers a peek into the area’s storied past, is Hansan-do, home to Jeseungdang, the military complex where you can sit in the same spot where the admiral himself once sat, looking out across the water, composing poetry, saying prayers and planning his famed battles. The ferry ( T. 055-644- 5464) for Hansan-do leaves every hour, takes about 25 minutes and costs 9,000 won for the round trip.

In a word: Seafood. It is everywhere along the bustling waterfront, offering everything from sashimi to fried fish to barbecued shellfish. Tongyeong supplies 70% of Korea’s yearly oyster haul and a wealth of restaurants here serves all manner of oyster dishes. One of the more famous is Yeongbingwan, located across the canal on Mireuk-do Island. Try the gulbap, a hot bibimbap dish with oysters, along with an order of fried spicy oyster cakes called guljeon. Yeongbingwan (T. 055-644-8028) closes at 8pm, so get there early.

Tongyeong is also famous for Chungmu gimbap, a simple meal of rice, kimchi and spicy slices of squid wrapped up in seaweed. It is served by several restaurants right across from the ferry station.

And don’t forget to try the honey bread, known as kkulppang. This sticky treat comes in a variety of types, all with sweet bean paste in the middle. There are several shops that sell it all along with waterfront. Remember to ask for a lot of napkins.

GO>
Intercity buses run between Seoul’s Nambu and Express bus terminals and Tongyeong. The trip takes a little over four hours and the fare will run you between 20,000 to 34,000 won. If you’re not a fan of long bus rides, you can take the KTX to Busan. From there it is about an hour and a half from the Seobu Terminal just outside the Sasang subway station and the fare is 9,800 won.

STAY>
Whether you want to stay near the bus terminal slightly away from the action, or spend a few more bucks to stay along the waterfront, there are accommodation options to fit any budget.

• Tropical Dream Resort -Geoje Island
If price is not a concern, the Tropical Dream Resort on nearby Geoje Island is one
of the more elegant, if not unusual, places to lay your head for the night. At first site it resembles an old artillery battery with its unadorned concrete structure jutting out at odd angles. Inside, though, it is pure class. Each room comes with its own outdoor jacuzzi and private patio. Rates will run you between KRW 180,000— 260,000. T. 055-681-5550

• Hotel Gallery
Located on Mireukdo, Hotel Gallery has rooms with a good view, elegant decor and large whirlpool baths. Rates run from KRW 80,000 to 100,000 with a view of the water and easy access to some great restaurants nearby. All of the rooms have free Wi-Fi and the restaurant serves a decent breakfast in the morning. If you want to downgrade a few bucks you can go next door to the Hotel La Belle. Both hotels are new and both are nice for the price. Hotel Gallery: T.055-648-4870. Hotel La Belle: T. 055- 646-8807

• Hotel Hansan
Centrally almost at the mid-point of the canal, Hotel Hansan is a cheap option with minimal amenities. A seaside view looking out on the large ships moored in the canal will run you KRW 60,000 and a room facing away from the water KRW 40,000. It is just a short walk from the ferry terminal. T. 055-642-3374

• Napoli Motel
Perfectly situated on the main waterfront, the Napoli offers great night views of the port. Right across the street you can catch the 9:30am bus tour after picking up your day’s supply of honey bread next door. T. 055-646-0202