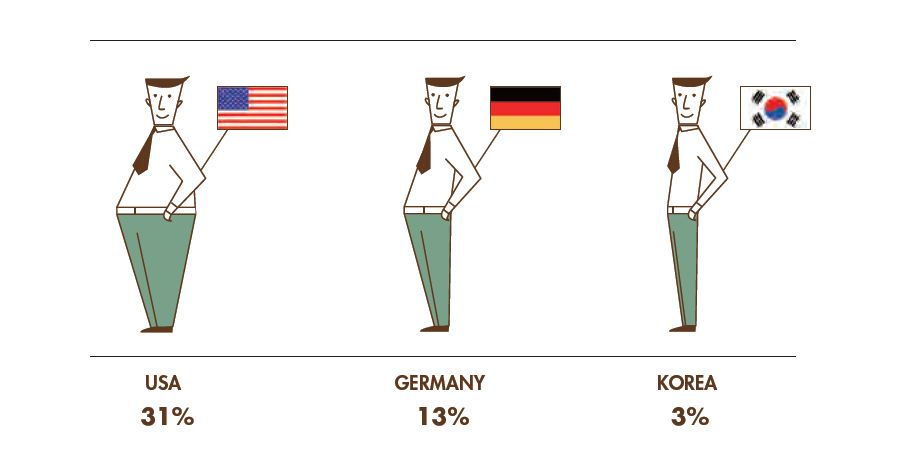 A graph of obesity rates by nation was posted on the website of a Korean online community. The graph, composed of “emoticons” that grew increasingly spherical in accordance with national obesity rates, caused quite a stir. Firmly planted at the most globular end of the graph were, naturally enough, the pleasantly plump Americans, with a national obesity rate of 31%. At the far opposite end—with an emoticon so thin you’d almost have to squint to see it—are the Koreans, with an obesity rate of just 3%.

Not only are Koreans thin, but their bodies are becoming more “Westernized.” According to a recent study by the Ministry of Knowledge Economy’s Korean Agency for Technology and Standards, middle-aged Korean men and women are growing thinner and their legs are growing longer, which the ministry attributed to changes in diet and increased exercise. As further evidence, the Shinsegae Department Store’s online store now has a section dedicated to “big-sized” bras of C-cup and over. The online store noted that while A- and B-cup sales have fallen from 92% of all bra sales in 2010 to 69% last year, C-cup sales have skyrocketed from 8% to 23%.

With obesity a growing problem in much of the developed world, why do Koreans remain so thin? What’s their secret?

OECD statistics bear out the Korean miracle. In an increasingly spherical world, Korean obesity rates are shockingly low. As of 2009, Korea’s obesity rate was just 3.8%, slightly below the second thinnest nation, Japan, and rating pretty well against non-OECD states India (2.1%), Indonesia (2.4%), and China (2.9%). The data also shows that these rates have held steady over the last decade, in contrast to many other OECD states where rates have climbed (and in stark contrast to the United States, where rates have skyrocketed).

Mind you, the news wasn’t entirely good. While obesity rates are extremely low, 30.5% of Koreans were “overweight.” That’s still a good number compared to other OECD nations, but it is considerably higher than Japan, where just 24.9% of the population was overweight. Korea’s obesity rate for girls (16.2%) was also higher than that for girls in several other OECD nations such as Turkey, Norway, and France, albeit still better than most of the rest, and nowhere near as bad as the United States (35.0%) and Greece (45.0%).

Visitors to Korea often remark on how thin Koreans—and Korean women in particular—are. And indeed, Koreans can be quite vicious in their standards. In a post at popular K-pop blog allkpop entitled “What Koreans Consider ‘Fat’,” poster Freyja posts pictures of “chubby” entertainers such as Shin Ae, Solbi, and Song Hye-kyo, none of whom are likely to star on The Biggest Loser anytime soon.

Certainly genetics play their part. Koreans—like other Asians—tend toward ectomorphic body types, which is to say, thinner, lighter builds often accompanied by higher rates of metabolism. Lifestyle and culture, however, play very important roles, too. Although the Korean diet is changing—a fact much bemoaned in some quarters of the Korean press—Koreans still eat more vegetables and less fat than other peoples around the world. In his 2010 book The Five Factor World Diet, celebrity trainer and author Harley Pasternak praised Korean cuisine as one of the healthiest in the world—it’s low in fat and high in tofu, noodles, fish, and fermented vegetables, most notably Korea’s signature dish, kimchi. In her Korean Diet Tips posted at eHow, Lane Cummings also notes that Koreans eat relatively little meat (the popularity of galbi and bulgogi notwithstanding) and consume little added sugar, with the most popular form of carbohydrate being gluten-free and sugar-free rice.

Social pressure also helps keep Koreans thin, especially if you’re a woman. A 2009 report by the Ministry of Health found that two in ten Korean women suffered from undernourishment. Just to put that into perspective, that’s roughly the same rate of undernourishment as Sudan, according to a 2009 UN study. Unlike Sudan, however, female undernourishment in Korea is largely voluntary. Young women suffer especially high rates of undernourishment—a 2012 report in the Korea Times noted that extreme dieting was common among Korean women; advertisers and media promote body images some consider unrealistic, and society encourages young women to lose weight. Korea Times cited a report by the National Youth Policy Institute which warned that 70% of young Korean women have been on a diet, in contrast to countries such as China, Japan, and the United States, where the rates were just 48%, 46% and 33%, respectively. Citing a report by Y.H. Khang and S.C. Yun, Harvard University’s Tess Hellgren noted statistically significant rises in “underweight” BMIs in women aged 20 to 39, a remarkable trend given global trends towards greater obesity.