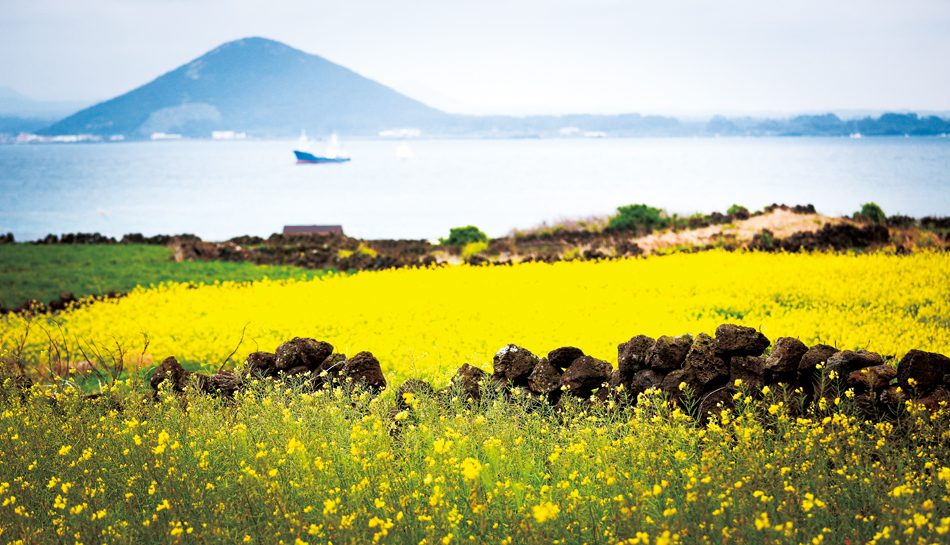 Traveling Back in Time

The Back Roads of Jejudo’s Udo Island

With Jejudo Island’s iconic Seongsan Ilchulbong, or “Sunrise Peak,” serving as a backdrop in my rear-view mirror, I slide my car into a parking spot in front of the Seongsan ferry terminal and race through the heavy rain to the ticket booth inside. “Two tickets for Udo, please!” I gasp as I balance a dripping umbrella in one hand and my drenched camera bag in the other. Ticket in hand, I hop onto the small ferry at the back of the terminal with just seconds to spare.

As the ferry makes its 15-minute trek across the choppy sea, Udo, or “Cow Island,” slowly comes into view and I begin to see how it got its name. The northern end of the island is flat while the southeast features the curved, bumpy shape of the parasitic volcano cone Souimeori Oreum, giving it the appearance of a cow lying down.

Located just off the eastern shore of Jejudo Island, 3.5 km northeast of the small town of Seongsan-ri, Udo is one of Jejudo’s most popular tourist attractions, with over one million people visiting its shores every year. Famed for its brilliant, white sand beaches and crystal clear waters, most visitors to the island spend their time hiking or riding bikes along the popular Jeju Olle 1-1 coastal circuit. But on this day I set out to explore the less crowded back roads of the island, especially beautiful in the spring when the yuchae, or canola flower makes its appearance, covering the center of the island in a golden blanket of color.

As I step off the ferry at Udo port, I’m immediately struck by the absence of long lines of taxis and endless stalls selling everything from fruit to artwork, a stark contrast to most of Jejudo’s other top attractions. Udo has less of a tourist vibe to it. It’s quiet, laid back, and not entirely willing to succumb to the lure of mass tourism. I’m left alone to explore the island on my terms.

Off the beaten path

While the coastline and its beaches are indeed pretty, a detour off the main road quickly takes one towards the center of the island and an entirely different world. Narrow roads, built in a time before there were cars on the island, lead travelers along a winding route devoid of traffic lights, past fields bursting with brilliantly colored yuchae flowers. The fields and roads are separated by a patchwork of intricate, basalt rock walls known as batdam, a key feature of the island. The rocks come directly from the coast and are roughly stacked on top of each other, leaving gaps between the rocks. The gaps allow strong winds to pass through the rocks, reducing pressure on the walls and helping to protect the farmers’ fields during the typhoon season.

As one walks deeper into the countryside, more of the basalt rock can been seen on the old, Jejudo-style homes dotting the landscape. Desiring a closer look, I wade carefully into a field full of fresh yuchae, the delicate petals and stems softly brush across my body as I make my way to one particularly interesting house. Just as I arrive, the friendly, weathered face of an older local woman pokes out of the front door. Seeing my fascination with the house, she explains to me with a wave of her cane that the houses’ walls are made in a similar fashion to the walls surrounding the fields and roads. Originally, the gaps were filled with dirt and sand to keep out the wind and rain, but, in a nod to modernization, concrete is used today.

As I reach the midpoint of the island and the land begins to gently slope back down to the sea, I reach a part of the countryside where all the key elements of this timeless landscape come together in perfect harmony. Layers of rock walls crisscross the land below and yuchae flowers burst out of nearly every nook and cranny. Then, for just a moment, the on-again-off-again pattering of rain stops and shafts of sunshine break through the thick clouds above, bathing the fields before me in a soft, muted light. The blur of the glowing yuchae swaying in the wind provides a sharp contrast to the hard, jagged rocks that surround them and the dark blanket of clouds overhead, showcasing in one magical moment Udo’s breathtaking rural beauty.

Warning: Due to the warm weather, the canola flowers are blooming a bit early, so if you’d like to see them, go no later than the first week in April.

Dessert: Peanut-flavored ice cream is a specialty on Udo and is available all across the island.

Hip in Hannam-dong
Scroll to top