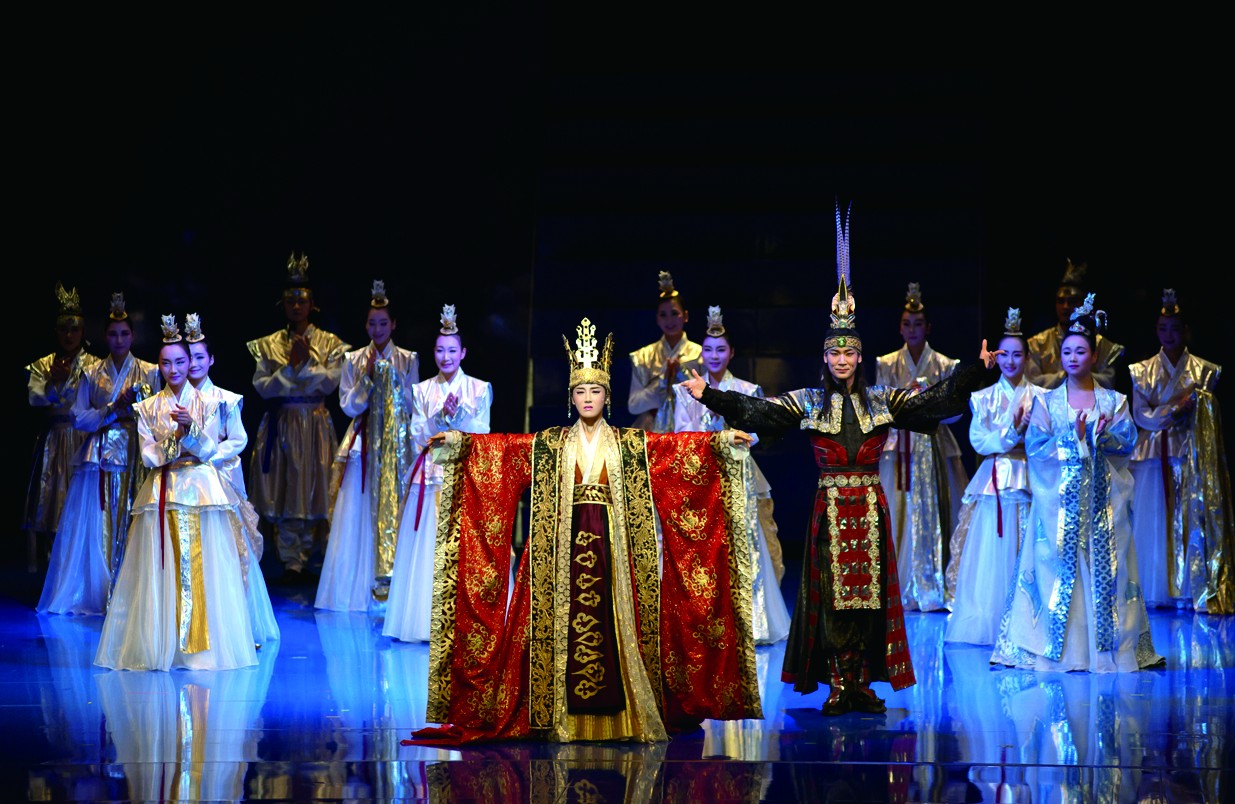 You know you’re in for something special from the very opening of the show. The laser lights project from the stage to the audience, creating almost tangible waves and clouds that break down barriers between stage and audience. What follows is nothing short of a brilliant exploration of the birth and rise to glory of the Silla Kingdom, performed in the language of interpretive Korean dance and music.

Performed daily at the Performance Hall at Expo Culture Center of Gyeongju World Culture Expo Park, Miso II: Silla, The Land of the Gods is the renowned Chongdong Theater’s tribute to the culture of Gyeongju, one of Korea’s most historic cities. Masterfully produced and performed, the show combines Korea’s rich cultural and historical heritage with the cutting-edge technology for which Korea is now famous. It takes the glory that was Silla out of the museums and brings it back to life, if only for an evening. Truly the land of gods

Miso II: Silla, The Land of the Gods began its run in July 2011 as part of an effort by Seoul’s Chongdong Theater to boost tourism in the southeastern town of Gyeongju, the capital of the ancient Silla Kingdom (57 BC–AD 935), through the creation of a “Gyeongju brand” performance. To do this, the theater adapted its popular Korean traditional performance Miso, a narrative tale of love set in the Joseon Dynasty (1392–1919), to the new surroundings. Fortunately, Silla—a kingdom rich in dramatic history and lore—proved a rich source of material.
Directed by veteran choreographer Choi Jeong-im and choreographed by Kim Chunghan, Miso II is a three-act show beginning with the very foundation of the Silla Kingdom itself. According to legend, Silla’s first king, Bak Hyeokgeose, was born from an gourd-shaped egg. On stage, this is beautifully reenacted as a half-nude dancer emerges from a magical egg. Like its Seoul progenitor, Miso II is also largely a tale of love, albeit one between Gyeongju’s Queen Seondeok (r. 632–647), one of only a handful of female Korean rulers, and Gen. Yongchun, the commander of Silla’s elite corps of soldiers known as the Hwarang. Ultimately, it’s not a happy romance—Yongchun is slain in battle—but Seondeok’s reign marks the start of a blossoming of Silla culture and power that ultimately ends with the kingdom’s successful unification of the Korean Peninsula under Silla rule.
The Korean word miso means “smile,” and Gyeongju provides one of the most famous smiles in Korea—an ancient roof tile decorated with a captivating smiling face. This smile—a symbol of the city—is a motif that repeats itself throughout the performance, most notably in the masks worn by the dancers. In fact, many icons of Gyeongju’s past appear throughout the performance, including the long-gone Woljeonggyo Bridge, the Seokguram Buddha, and Gyerim Forest.

If you’re easily moved by music, bring your tissues. Miso II’s music, written by composer Kim Te-kn, accomplishes a difficult task—harmonizing Korean traditional music with the power and awe of a John Williams soundtrack. Genres and instrumentation change from set to set—one minute it’s low brass worthy of Gustav Holst, the next it’s plaintive solos on the daegeum, the Korean bamboo flute. More importantly, the sound perfectly complements the movements on stage.

Kim Chung-han’s choreography mixes Korean traditional dance with modern interpretive dance. Combined with the intricate set design, the dance sets allow the audience to follow the story rather easily. Ancient battles are recreated with the requisite energy and violence, while tranquil love scenes in the forests of Gyeongju radiate warmth and mystery. Technology helps some of the sets along. One particularly profound scene features laser beams radiating from the forehead of the iconic Seokguram Buddha—if that doesn’t inspire you, nothing will.
Costume designer Lee Ho-jun, who has finetuned his talents preparing the costumes for the celebrations of two presidential inaugurations, should also be given star billing. His 200 costumes bring to life the color and pageantry that was the Golden Age of Silla.

LAYING THE FOUNDATIONS FOR PEACE
Scroll to top