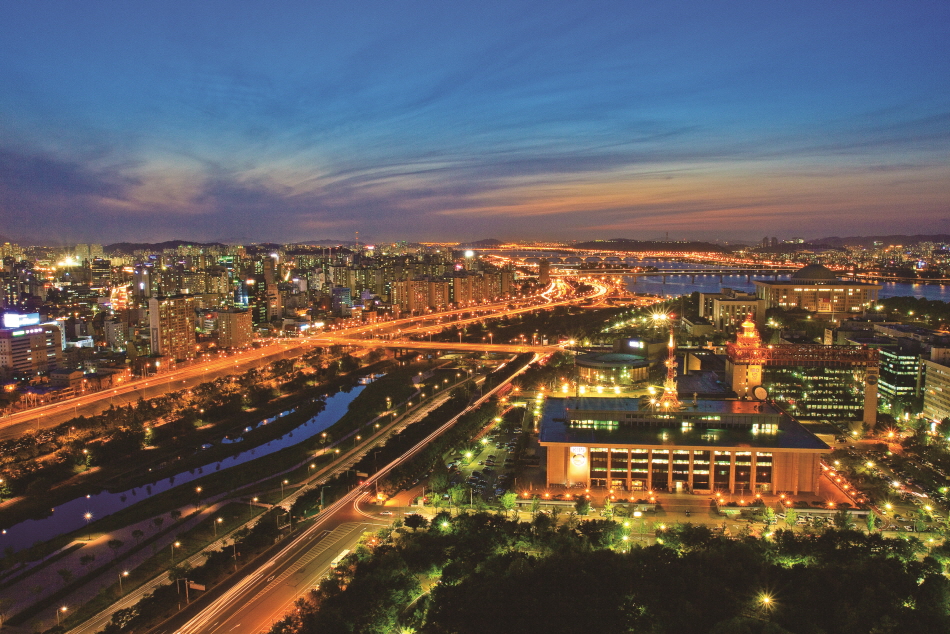 A WALK THROUGH YEOUIDO IN THE SPRING

April brings spring flowers to Seoul, and one the best places to enjoy them is Hangang Park and Yeouido Park, both on Yeouido, the large island in the Hangang River. Built on the site of the old Seoul airfield in the 1970s, Yeouido was the first planned city south of the Hangang River in Seoul. Its success helped spur the development of Gangnam and other new cities throughout Korea.

Yeouido sits at the center of the Korean establishment. The National Assembly, the Korea Exchange Center, and the headquarters of KBS, MBC, and a number of other important companies, including LG, are located here. The island also has several apartment complexes that are excellent examples of the “matchbox” design that was popular in the 1970s and 1980s.

The best way to begin a tour of Yeouido is from Yeouido Station 여의도역 (Line 5, 9). Leave from Exit 3 and walk straight toward Yeouido Park. From 1972 to 1999, the area was a large concrete plaza that was used mainly for political events. Large-scale political events fell out of favor after democratization in the 1980s, and the area was redeveloped into a green park in 1999. Walk through the park and enjoy the many flowering trees.

Leaving the National Assembly Visitor’s Center, turn left and walk past the front of the National Assembly Library until you come to Hangang Park. Developed in the 1980s as part of a chain of parks along the Hangang River, the park hosts the annual Yeouido Cherry Blossom Festival in the middle of April. The park spans the entire perimeter of the island and offers wonderful views of the Yeouido skyline as well as Mt. Namsan on the other side of the Hangang River. The park is particularly popular for nighttime cherry blossom viewing during the festival.

The long walk in Hangang Park leads to another Yeouido attraction: 63 City. Opened in 1985 as part of the preparations for the 1988 Olympics, the tall golden building was the tallest building in Asia at the time and remained the tallest building in Korea until 2003. The top floors offer sweeping views of Seoul from the observatory and restaurants. The lower floors have one of the largest aquariums in Asia, an IMAX theater, and a shopping mall.

From 63 City, turn left and then right at the next main street. The walk passes a number of “matchbox” apartment complexes built in the 1970s that sit symmetrically amid mature trees. Turning left at the corner with the Korea Exchange Center and MBC leads back to Yeouido Station.

Compared with the historic center of Seoul, Yeouido feels new and at times artificial. As a product of the period when Korea focused on creating a solid middle class, it offers more for children, making it a relaxing family destination, particularly during cherry blossom season.