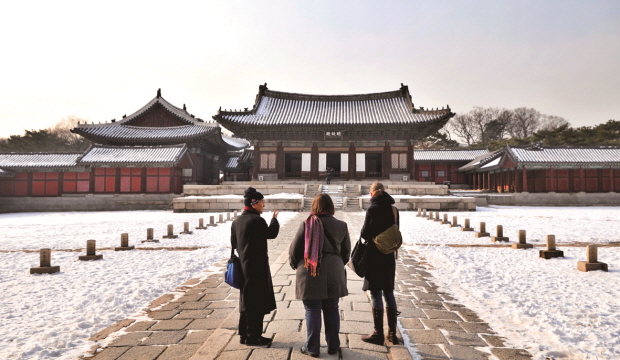 As part of its efforts to improve the infrastructure and resources available to visitors, the city of Seoul has created a unique program where people can reserve a personal volunteer tour guide for more than a dozen sites around the metropolitan area. This free service matches experienced guides with tourists for a one- on-one or small group tour, resulting in an intimate, personalized introduction to the history and culture of some of the most vibrant and interesting parts of the city. One of the most popular tours takes visitors on a relaxed and meandering walk through the streets and alleys of Bukchon, the “north village.” This picturesque area between Gyeongbokgung and Changdeokgung Palaces was once home to the vast estates of important officials and courtiers, making it one of Korea’s most historically important neighborhoods. A colonial period change in zoning laws meant the loss of most of these traditional buildings, as the estates were carved up into smaller plots of land, but it also led to the rise of the area’s characteristic and charming city hanok— small, inward-facing homes that utilize most of the architectural style and features of traditional Korean houses. The area has become a major model for Korea’s historic preservation programs, and the guided tour helps visitors gain a deeper appreciation for the beauty and value of this unique neighborhood. The guides also know the best places for taking in this beauty, helpfully pointing out the best spots for photography that will highlight the local landscape, including dramatic shots of the sea of tiled roofs from up high, crooked granite staircases carved straight out of the hillside, and delicate decorative elements on the high gates and walls of local homes.

The narrow streets and back alleys of the area form a confusing warren of pathways for many visitors, but the experienced guides can help navigate the complex geography to reveal a wealth of tiny workshops, galleries, and museums hidden away from the main roads, including the work and display spaces of some of Korea’s national treasures and living heritage holders. From embroidery and folk painting to bookmaking, Bukchon is home to some of Korea’s most treasured craft workers, who have converted the hanok into places where their arts can thrive and be introduced to the public in a setting that helps people connect to an older, more traditional way of life.

One of the great pleasures of the tours, though, is to learn about the areas through the guide’s own experiences. For tourists it can be especially difficult to form human connections that can help the area’s history and culture come alive, but on a recent tour, the guide was able to bring the Bukchon area and Korea’s past to life by sharing her childhood memories of visiting traditional houses and wearing traditional clothing. “We didn’t have ice cream back then, but we used to snap off icicles in the winter and enjoy those,” she recalled, snapping off a small one from a low-hanging branch. As the tour rambled on, she pointed out a tree that was a gathering spot for the neighbors in the summertime, narrated who owned which homes and what had been done to restore them, and told stories about how the neighborhood had changed over the decades. The personal touch was also the highlight of a tour of Changgyeonggung Palace, where the guide told stories of his youth that helped illuminate more than the palace’s historical importance: how the changes wrought during the colonial and postwar periods tied in with people’s lives, including his own. The palace was originally built to house an overflow of dowager queens and important female royals, but the Japanese colonial authorities walled it off from neighboring Changdeokgung Palace and converted it into a public park, including a zoo. Through the guide’s memories of visiting “Changgyeong Park,” visitors gain a more visceral, real sense of both the palace’s history and the scars of colonialism. “We used to ride a cable car up that hill, there, when I was in university. I have a picture of me and my friends on it,” he recalled as he showed the way through the palace’s extensive gardens, pointing out which structures were original, which were rebuilt, and which had been brought in during the palace’s park days, such as a Chinese pagoda, a memorial stone for royal placentas, and a large greenhouse.

Personalizing the tour can also help people explore their own interests, be it architecture, culture, politics, or history. On request, the guide was able to lead a lively discussion both of the different architectural features and its sometimes violent and scandalous political background. By uniting curious visitors and residents with free, personalized guides, the city of Seoul has created a special program that brings people together from across cultures while also expanding people’s knowledge of Seoul’s most important and beautiful assets.

Museums in Gwanghwamun
Scroll to top