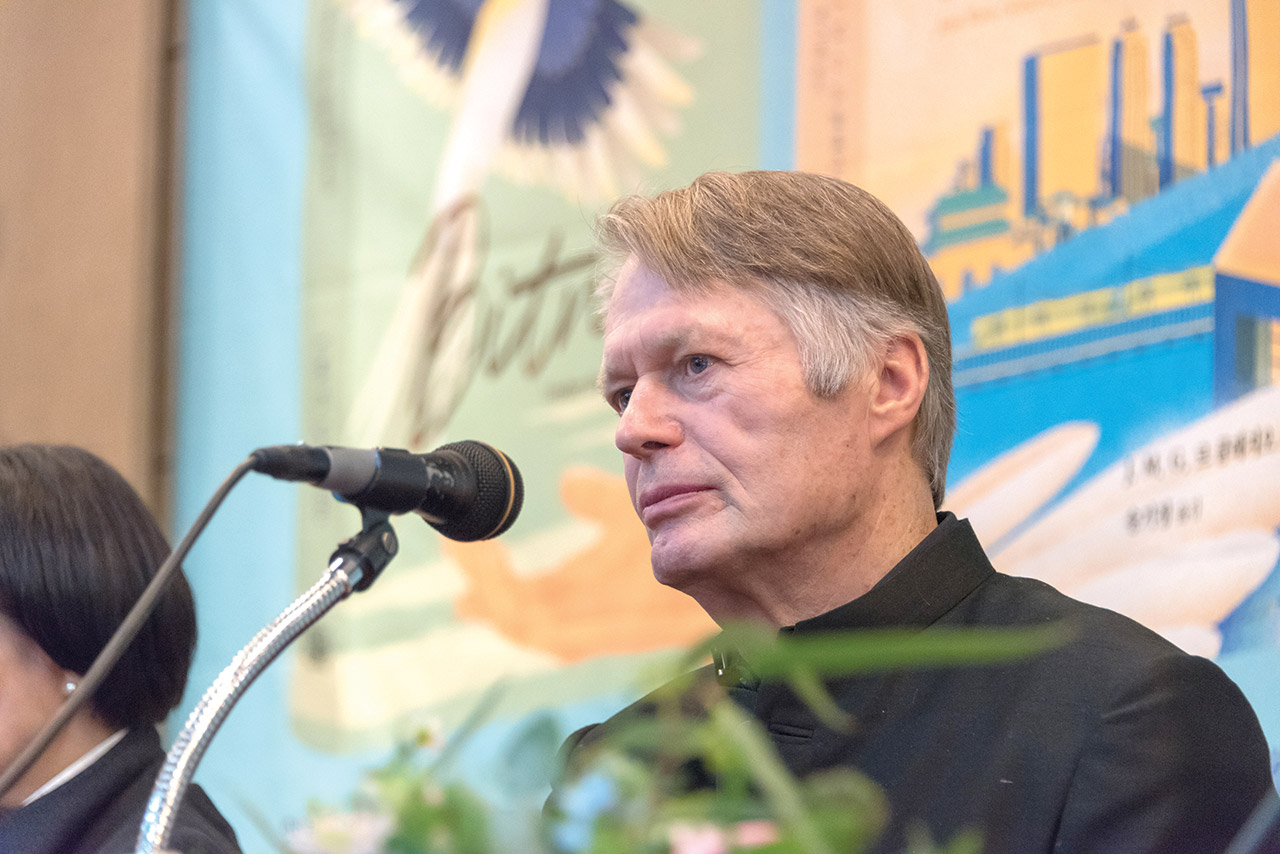 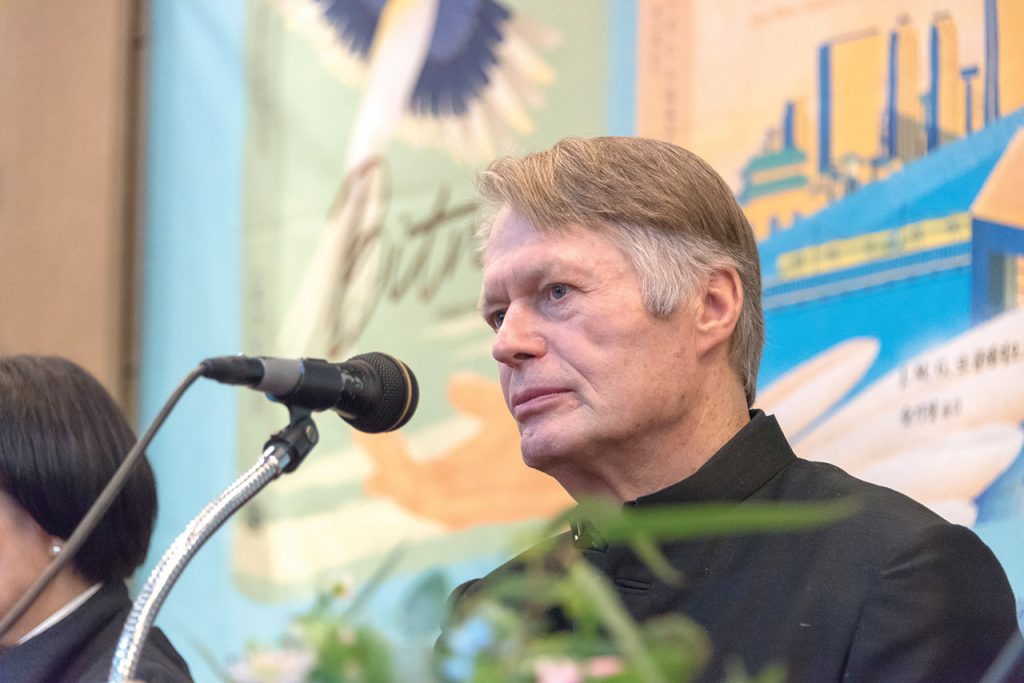 Nobel laureate J. M. G. Le Clézio’s ‘Bitna: Under the Sky of Seoul’ is an intimate exploration of a city in perpetual change

“The most impressive thing about Seoul is that because it has so many people and a variety of elements, it’s always transforming. When you come back to a certain place six months later, some things have disappeared and new things have constantly been created. Compared with this, Paris is static and unchanging. I was talking with director Park Chan-wook, and he, too, said because Seoul transforms so quickly, he doesn’t want to leave, even for a minute.”

At a press conference at the Korean Publishers Association Building in Seoul’s Gwanghwamun district on Dec. 14, J. M. G. Le Clézio expressed his affection for the city of Seoul, a city with which the renowned French writer has grown intimately familiar since he first visited it over a decade ago. The winner of the 2008 Nobel Prize in Literature’s recently released novel, “Bitna: Under the Sky of Seoul,” is a portrait of the city, its people and places, its beauty and its ugliness. For him, the Korean capital is a place full of tales. “Seoul is a place that fully stimulates the imagination. Seoul let me create stories.” 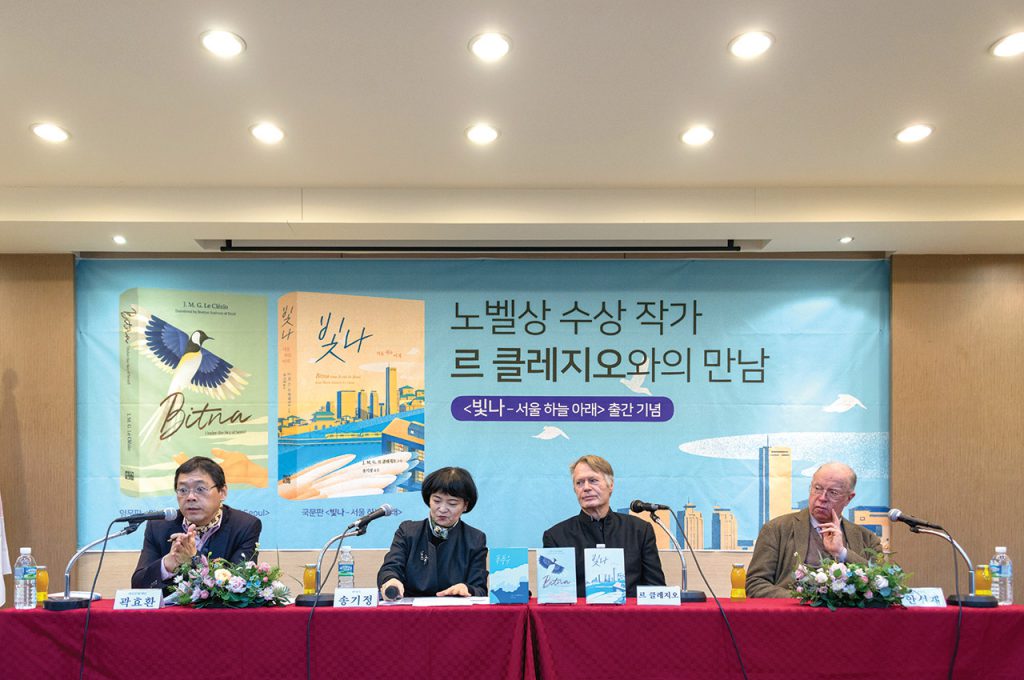 Seoul through its stories

Published in Korean and English editions, with a French edition scheduled for March, “Bitna” is a picture of life in Seoul as experienced by its denizens. Its characters come from a variety of backgrounds, reflecting the diversity of the city. Le Clézio unwinds their tales against the city’s rich tapestry of backgrounds, from the glitz of Gangnam to the grit of Yeongdeungpo’s working class neighborhoods. He weaves in many of the city’s landmarks as well, including Gyeongbokgung Palace, Changdeokgung Palace, Cheonggyecheon Stream, Bukhansan Mountain, Namsan Mountain and the Hangang River. The result is an exploration of one of the world’s greatest cities, largely as experienced by the writer himself. “All the places that appear in the novel, I visited myself,” he said in the press conference. “I don’t take taxis. I observed people while taking the subway or buses.”

The eponymous main character, Bitna, is a nineteen-year-old in her first year at university and a recent transplant to Seoul from Jeolla-do, where her parents work in the fish market. As it was for Le Clézio, the city is for Bitna an unfamiliar, crowded and lonely place. By chance, Bitna gets a part-time job telling stories to Salome, a woman with an incurable illness who now spends her days at home, waiting to die. Bitna’s stories open up a world of adventure for both Bitna and Salome. 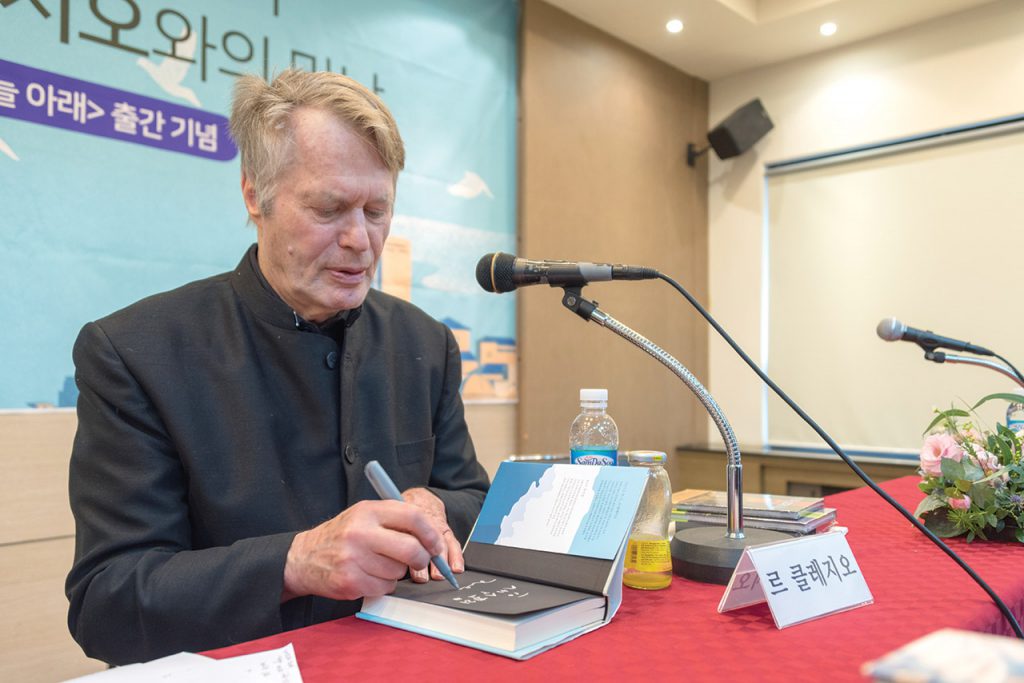 Bitna tells Salome five stories in all: the story of Mr. Cho, a retiree who raises pigeons and imagines the home he left behind in North Korea during the war as a baby on his mother’s back; the story of the mysterious traveler Kitty and the messages she delivers to bring once-distant neighbors together in community and friendship; the story of Naomi, abandoned as a baby, and Hana, the woman who raises her, and their encounter with life and death; the story of the singer Nabi, who rises to stardom but falls victim to the greed and lies of the people around her; and Bitna’s own story, about her life in the city and the fear she comes to experience as a result of a faceless stalker. Each story is layered with diverse themes that have attracted the author’s interest over the years, including Korea’s traditions, religions, history and cuisine, as well as intergenerational conflict, inter-Korean issues and sociopolitical issues.

Le Clézio may not be finished in Seoul, either. He sees many stories to tell in the people he meets on the street. “One morning at 6 a.m. I saw an elderly people picking up waste paper in Sinchon,” he says. “Curious as to where they came from and where they were going, I wanted to follow them. I also want to write novels about a fortune teller I met near Ewha Womans University and about a Seoul taxi driver.”

K-pop With a Social Conscience