It doesn’t get much more simple than gukbap – even the name is clearcut: soup and rice. The portmanteau word carries with it a wealth of connotations, most importantly that of a meal for Korea’s working classes. Simple, filling and hearty, it’s been a mainstay of the regular folk since the Joseon era. There’s lots of varieties from spicy to plain, but the people of Seoul gravitate to simple meat soups with rice.

It’s an exceptionally straightforward dish, which is what makes the soup at Gwanghwamun Gukbap so very special. Chef Park Chan-il isn’t the kind of chef people typically imagine behind the scenes at a gukbap restaurant – he’s far better known as a writer and as the chef behind the Italian restaurant Locanda Mong Ro in Hongdae. “In the old days, there wasn’t much else in the way of cuisine besides Korean. There was American style or Japanese, but I wanted something with more originality, so I studied in Italy,” explains Park.

His winding career has now taken him back to his roots, culminating in a restaurant specializing in the foods he grew up on. Like many Seoulites, the simple soup was one of the dishes he looks back on with fondness, respecting its role in Korean cuisine: “Gukbap is the fast food of the Korean people.  It’s quick to eat, easy to digest  and easy to mask lower quality ingredients.” 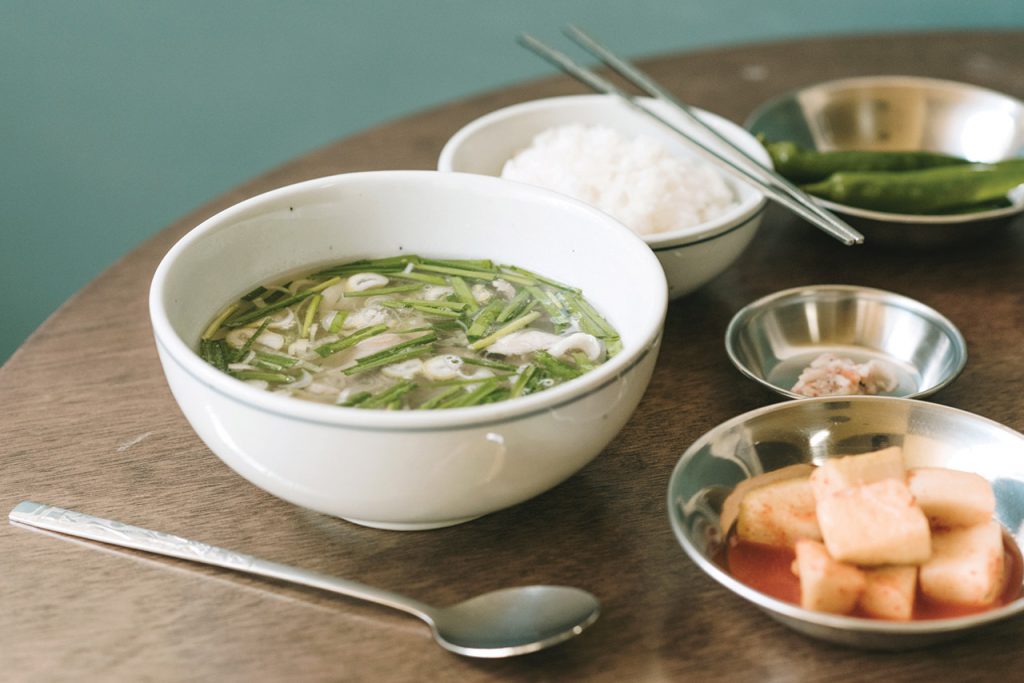 Park certainly hasn’t gone with cheap ingredients for his new venture. Everything on the menu at Gwanghwamun Gukbap shines with quality and care, from the rich Berkshire pork in the soup and the steamed meat platter down to the rice. “Lots of places don’t use really good rice because it’s so expensive,” Park explains, “but really, it’s only an extra hundred won or so per customer in the end, and the difference in taste with ours is really worth it.” Park only uses koshihikari rice from the famed fields of Icheon, and each grain glistens and gives off a subtle sweet and savory aroma.

Park’s gukbap is an austere experience. Unlike most renditions of the dish, the broth is clear rather than cloudy. The flavors are simultaneously refined and deep, with a sprinkle of green onion giving an herbal balance and hint of sharpness to contrast the richness of the meat. Clean and complex, it’s an almost platonic rendition of the dish, stripped back to only its most essential elements. Add a spoonful of rice, and the dish takes on a luxurious texture that still manages to satisfy even the most tremendous hunger.

The pared-back approach can be seen throughout the menu. The steamed pork needs only a tiny brush of vinegary seasoning or touch of salt to express itself in all its tender, meaty glory, and the naengmyeon served here has an almost crystalline quality, relying on simple flavors and textures. “Coming up with the right version of naengmyeon took a lot of work. Everyone has their own idea of what it should be – they all ‘myeonsplain’ to me!” Park exclaimed.  But his careful fine-tuning shows up everywhere. Even the makgeolli and soju have clean, singular flavor profiles. 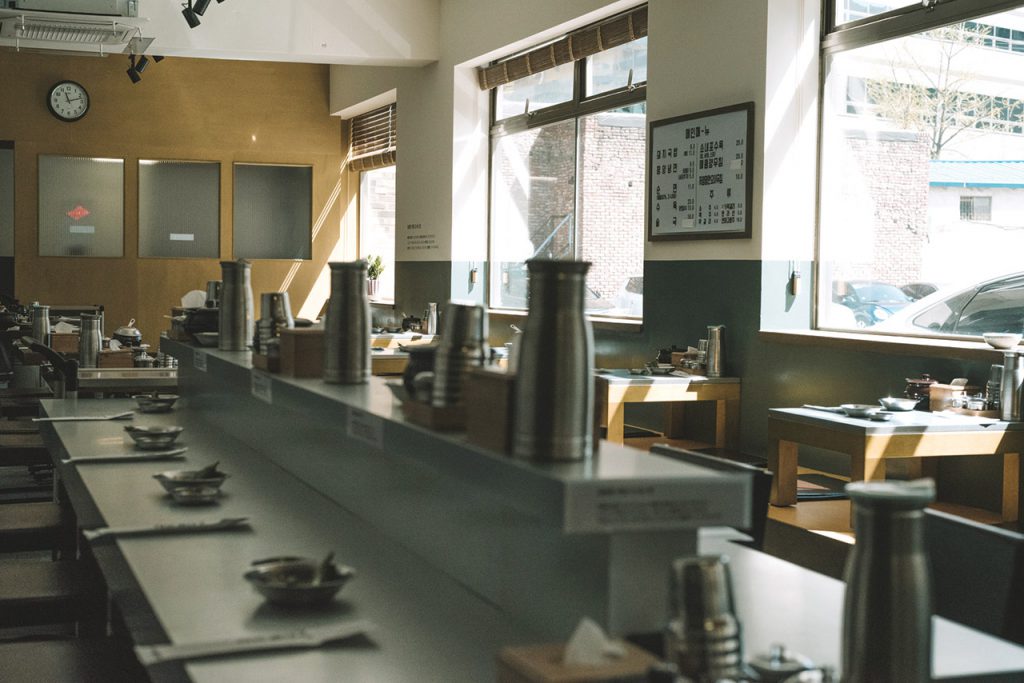 Park’s focused flavor profiles demonstrate the depth of his professional training and palate, but the foods themselves hearken back to his childhood rather than professional career. He’s clearly kept the origins of the dish in mind, and approaches the food at Gwanghwamun Gukbap with a combination of humility, curiosity and memories of the flavors he grew up with.

“This is new to me. I don’t know this food well, but I’ve been eating it for a long time. I love it,” Park says. “I started in western food, but as a Korean, I wanted to make Korean food and I thought, ‘Let’s give it a try.’ I kept wondering why so many of the foods I tried weren’t that good anymore. They say talk is easy, but I just decided to give it a go and see if I could make it better.” But as time went by, he started to long for the foods of his past and has realized that longing through Gwanghwamun Gukbap: “Everybody knows this food.” 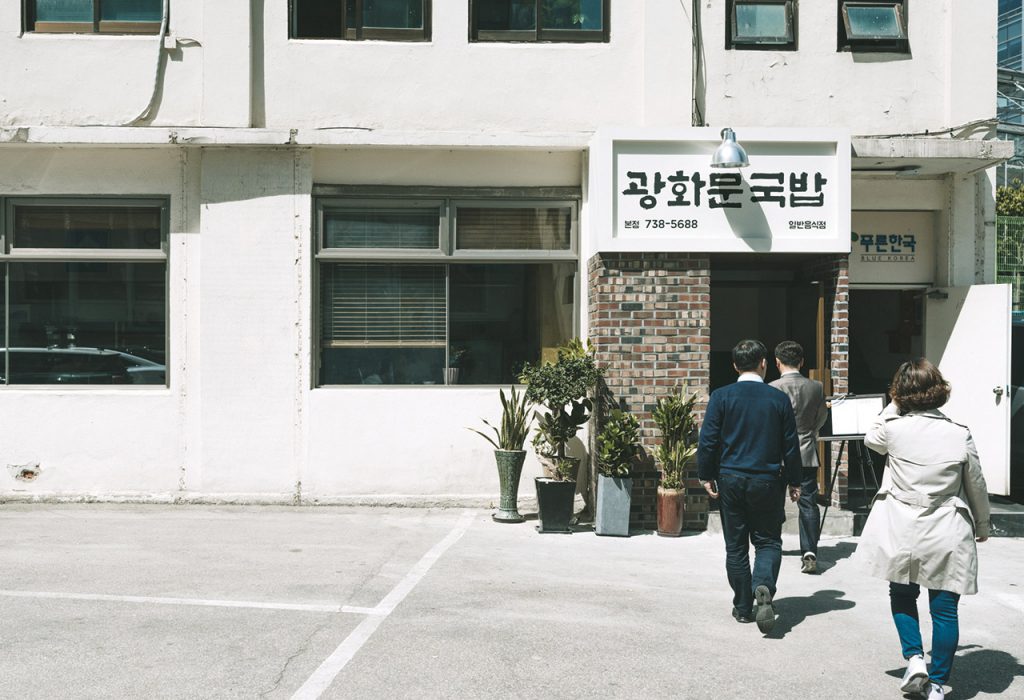 Mastering the Art of Healing