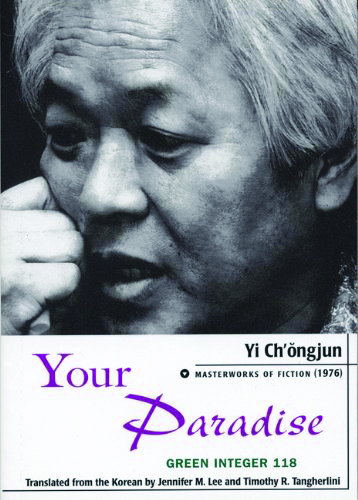 In the excitement surrounding the recent success of modern Korean fiction, it is sometimes too easy to let the more distant past recede, and allow worthy authors and works to go unexamined. Sometimes, however, a slightly older work is reprinted, and we are better for it. Such is the case with Yi Chong-jun’s “Your Paradise” (translated by Jennifer M. Lee and Timothy R. Tangherlini). Its return is a happy event, as it is a subtle and impressive work exploring Korean history, reflecting allegorically on the distorting effects of power, and exploring the notion of “otherness.”
The fact-based tragi-comic story is of a leper colony on the island of Sorokdo during a change in leadership. Director Jo, brimming with confidence and plans, comes to the island vowing to create a paradise for the patients. The patients, however, contain generations of resentment and regard his plans as an attempt to build a “statue” to himself. The statue is both real and metaphorical, as the island’s history makes clear, and has deep roots in Japanese colonialism. The director is only slightly fazed and in sometimes amusing passages is described as using soccer to develop an esprit de corps on the island. He then begins his grand conceit, to claim from the sea an enormous swath of land and build a bridge to the mainland. As the project fitfully advances, events increasingly swing out of control.
The story is told in three sections, each from a different perspective, one of which is the marvelous Sang-uk, a hospital staffer with a marvelously developed sense of history and futility who serves as Jo’s assistant. The “Your” of the title is, of course, ironic, as the paradise is clearly that of the director and not of the lepers. Yi is clearly drawing parallels between the leper colony and Korea of the 1960s, in which individual desire was sacrificed in the name of a “good” defined from above.
Finally, the story is an often-moving meditation on what it means to be the “other.” The rift between “normal” and “abnormal,” as demarcated by lepers on the island and the “healthy” on the mainland, is well delineated, and several sub-plots explore this in various ways, including a happily resolved love-hate relationship.
The ending, moving and ambiguous, shows that Yi is also playing a larger game, considering the role of power on the ruled and the ruler. After an extremely deft bit of writing in which Sang-uk’s motivations are revealed to have been very complex, the novel ends with the Director on the island after his retirement. He has stayed to demonstrate his permanent commitment to the lepers. Yet even as a citizen it is unclear if he is not trying to get his statue built.
This is outstanding writing, an interesting plot and clever reflection on Korean history as well as the general issue of power. It takes its place with Yi Mun-yol’s “Our Twisted Hero” and “Pilon’s Pig” among the great Korean allegorical works in translation.

More Info
“Your Paradise” is available on the Green Integer website.
www.greeninteger.com

A New Year for Korean Cinema

Rise and Fall of the Cookbang
Scroll to top
댓글 로드중...