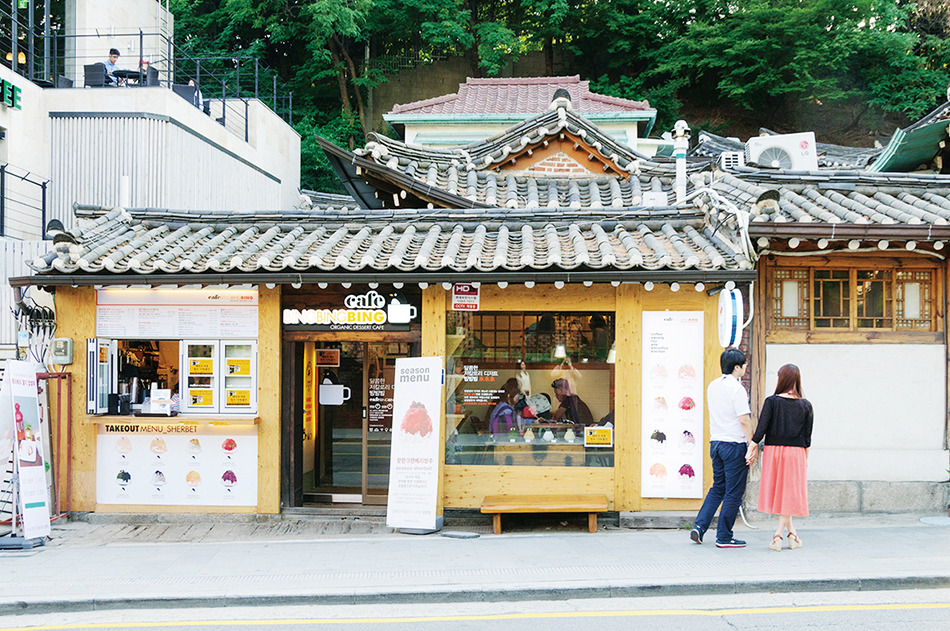 The little green Jongno 11 bus is more than just a good way to get from Gwanghwamun to Seoul Station. By an accident of transportation planning, it’s a veritable sightseeing bus that takes you through the very heart of old Hanseong, as Seoul was called when it was the royal capital of the Joseon Dynasty. Plenty has changed over the last century, of course, but the coexistence of the old and new is what gives Seoul its characteristic tension and charm.

Founded in 1940, Samcheong Park is one of Seoul’s oldest public parks. It’s a pleasantly shady spot with benches, walking paths and other common park amenities. It’s also connected to a number of hiking paths, including the Seoul Fortress Wall Hiking Trail. Be sure to drop by the charming Samcheong Forest Library, an old snack shop that has been renovated into a place of reading. Cultural programs conducted on a “talent donation” basis are held here, too.

Walk down from Samcheong Park and you’ll come to Samcheong-dong, a cozy stretch of boutiques, eateries and cafes that retains much of its laid-back charm despite swarms of tourists on the weekend. Military history buffs will want to see the Beonsachang, an old armory built in 1884 as Korea was attempting to modernize its military. It’s on the grounds of the Korea Banking Institute.

Follow Samcheong-dong Road until you reach the eastern wall of Gyeongbokgung Palace. The history of Seoul’s oldest palace is almost a microcosm of Korea’s dramatic past: it was founded in 1395, burnt to the ground during the Japanese invasion of 1592, rebuilt in 1867, and then almost completely destroyed again by the Japanese colonial government in the early 20th century. Much of what you see today is a post-war reconstruction, although some of the grander structures like the main throne hall and the stunning Gyeonghoeru Pavilion date from the 1867 reconstruction. A particularly scenic spot is the Hyangwonji Pond at the northern end of the palace—note how the pavilion harmonizes with the mountains in the distance.

Gyeongbokgung Palace is also home to two museums of note. The National Folk Museum of Korea is home to 4,000 artifacts detailing the daily life of Koreans past. The National Palace Museum of Korea, meanwhile, holds artifacts from Seoul’s royal palaces and is an especially good place to learn about the lives of Korea’s royalty.

Road of the Six Ministries

The front gate of Gyeongbokgung Palace, Gwanghwamun Gate, has had as tumultuous a past as the palace itself. In 1926, the gate was moved to the east side of the palace by the Japanese to make way for the massive Government-General Building (torn down in 1996). The gate was returned to its original location, more or less, in 1963, but the restoration used concrete instead of wood. A proper restoration began in 2006 and was completed in 2010.

Connecting Gwanghwamun with the Sejong-ro Intersection is Sejong-ro, a wide boulevard lined by some of the country’s most important political, economic, diplomatic and media institutions. This concentration of power has been a feature of the road going back to the Joseon Dynasty, when it was called Yukjogeori (“Six Ministries Road”) since it was lined by, as the name would suggest, six royal ministries.

Sejong-ro was originally 16 lanes wide, but in 2009 it was reduced to 10 to make way for Gwanghwamun Plaza, a pedestrian space that stretches down the middle of the road for almost its entire length. The plaza is home to two prominent statues. Now surrounded by fountains, the statue to Korean naval hero Yi Sun-sin has been a Seoul landmark since 1968. To the north is a statue of a seated King Sejong the Great, the lauded 15th century monarch whose long list of accomplishments includes the invention of the Korean script, Hangeul. Behind the statue is the entrance to the Story of King Sejong Exhibition Hall, a museum where you can learn about one of the greatest figures in Korean history.

Flanking Gwanghwamun Plaza to the west is the massive Sejong Center for the Performing Arts, one of Korea’s leading cultural spaces. To the east, meanwhile, is the Olleh Square Dream Hall, where you can take in jazz performances on Thursday, Friday, Saturday and Sunday nights for just KRW 1,000 a ticket. Also on the east side of the plaza is Kyobo Bookstore, Korea’s largest and most famous bookstore, with an extensive foreign-language collection. Just in front of Kyobo is the Bigak, a Korean-style pavilion erected in 1902 to commemorate the 40th anniversary of King Gojong’s reign.

Where You Can Find Anything Under the Sun

Keep moving south and you’ll come to Ilmin Art Museum, housed in the historic former headquarters of the Dong-A Ilbo newspaper, and Cheonggyecheon Plaza, where the Cheonggyecheon Stream begins. In the old days, when Mt. Namsan marked the southern limit of the capital, the Cheonggyecheon was the largest, most important waterway in the city. After the Korean War, shantytowns built by refugees lined its banks, and it became an open sewer. Over a period of 20 years beginning in 1958, the stream was covered with concrete, over which an elevated highway was built. In 2003, however, work began to tear down the highway and restore the stream. The restored waterway was opened to the public in 2005, providing Seoulites with a much-needed urban oasis.

From Cheonggyecheon Plaza, keep following the main road south until you reach Seoul City Hall and Seoul Plaza. The wave-shaped glass structure is the new city hall, while the historic structure to its left is the old city hall, now used as a public library. On the top floor of the library is a museum, café and a rooftop garden.

A short walk south of Seoul City Hall brings you to Sungnyemun Gate, also known as Namdaemun Gate, the historic southern entrance to Seoul. First erected in 1398, the gate enjoyed a remarkably good run until 2008, when the wooden superstructure was largely destroyed in an arson attack. The gate was reopened in 2013 following a massive restoration project that not only repaired the fire damage but also rebuilt sections of Seoul’s old city walls that were demolished by the Japanese colonial authorities in the early 20th century. The beautiful gate, surrounded by glass and steel skyscrapers, is a great representation of Seoul’s dynamic harmony of old and new.

Behind the gate is Namdaemun Market, one of Korea’s two largest outdoor markets. While there’s been a market in the area since 1414, the market really came into its own in the 20th century, especially after the Korean War. The sprawling market sells pretty much anything under the sun, or as local merchants put it, “We’ve got everything except nuclear weapons and tanks.” The market is particularly known for its cheap clothing, ginseng and seaweed (particularly popular with Japanese and Chinese tourists) and cheap optical wear.

The end of the Jongno Bus 11 line is Seoul Station, one of Korea’s busiest transportation hubs. It can be good fun to stand on the second floor concourse and watch the waves of people below. Next to the new station is the beautiful old station, easily recognized by its Byzantine dome. Completed in 1925, the station is now a cultural space called Culture Seoul Station 284.