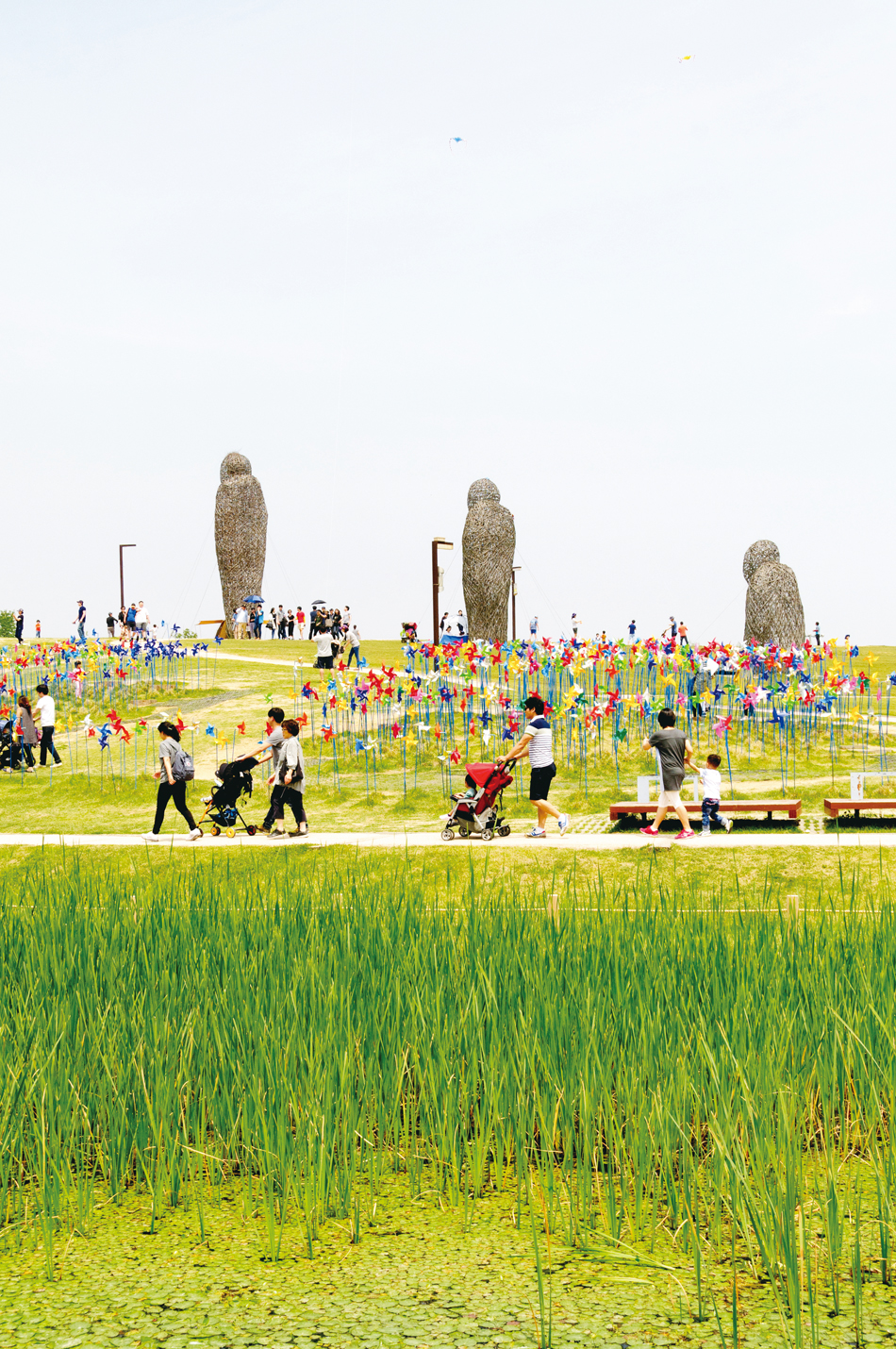 DMZ Train and Imjingak Park offer not only views, but also insight into the reality of national division

The train passes over the railway over bridge spanning the Imjingang River, the passengers standing up—some with camera in hand—to better appreciate the natural beauty of the river valley. Bounded by rugged cliffs, forested hillsides and shimmering rice paddies, the slow, fat river meanders its way through the countryside like a muddy green snake. Only the barbed wire along the tracks and the occasional observation post betray that this tranquil, bucolic canvas is, in fact, one of the most militarized frontiers on the face of the Earth.

On May 4, national rail carrier KORAIL restarted tourist service from Seoul Station to Paju’s Dorasan Station, a train stop along the inter-Korean DMZ which, as the northernmost point on the South Korean side of the old Seoul–Shinuiju line, also serves as the gateway to North Korea. A mere daytrip from Seoul, the trek—and a visit to nearby Imjingak Park—provides a rare opportunity to gaze into North Korea, one of the world’s most secretive states, as well as to learn about the tragedy of Korea’s national division.

The so-called “DMZ Trains” to Dorasan Station depart twice daily from Seoul Station at 8:30 AM and 1:30 PM; return trains to Seoul depart at 12:10 PM and 5:30 PM. The trip to the DMZ takes just 1 hour, 20 minutes; passengers must bring a passport or national/alien resident ID and fill out an application that will be processed at Imjingang Station, the last station south of the Imjingang River. The specially designed, three-car tourist trains are painted with national symbols and livery recalling the steam trains that once ran this route before the division of Korea and the Korean War severed the line. Photos and paintings inside the cars teach passengers about the history and ecology of the DMZ, while a camera on the front of the train provides video footage of the surroundings.

The trip is, like visits to other parts of the DMZ, unnervingly relaxing, as the militarization of the area and subsequent exclusion of civilians from the zone surrounding the DMZ have combined to produce an ironically tranquil landscape of woodlands, rivers and wetlands little touched by human activity.

Dorasan Station is not all that interesting in and of itself, as it’s mostly a logistical center for trains running to and from the large South Korean industrial complex in the North Korean city of Kaesong. At the station, however, buses will connect you with Dorasan Peace Park or, at the cost of an additional ticket, a tour taking you to the nearby Third Tunnel of Aggression and Dora Observatory. The former is a tunnel, discovered by South Korea in 1978, dug under the DMZ by the North Koreans to infiltrate the South, while the latter is a military observation point that provides sweeping views over the 4km-wide DMZ into North Korea. On a clear day, you can even see in the distance a giant statue of late North Korean leader Kim Il-sung.

Monuments to War, Parks of Peace

Rather than taking the train all the way back to Seoul, it’s better to get off at Imjingang Station in order to visit Imjingak, a memorial park on the southern bank of the Imjingang River. Established in 1972, the park was until recently as far north as civilians could go without a special permit. It is home to a number of exhibits, statues and shrines related to national division, the Korean War and national reunification. One of the most important of these is the Mangbaedan Altar, where Korean War refugees from the North and their descendants hold family memorial rites, which are ordinarily held in one’s ancestral hometown.

An observation deck, complete with binoculars, provides views over the Imjingang River and its surroundings. Also worth checking out are the ruins of an old steam train destroyed during the Korean War and the historic Freedom Bridge, a temporary wooden bridge erected across the Imjingang River in 1953 to bring home 12,773 South Korean POWs. The bridge was later removed and placed in its current location, surrounded by a pleasant Korean-style garden.

While at Imjingak, be absolutely sure to visit the Pyeonghwa Nuri Park, a beautiful, sculptured landscape of hills and grass fields attached to Imjingak proper. This part of the park was built in 2005 for the Global Peace Festival and is home to several pieces of installation art, none more impressive than Choi Pyung-gon’s “Calling Unification,” a series of giant bamboo men walking up a hill towards North Korea. A popular spot for photos is Pinwheel Hill, a hill covered in hundreds of multicolored pinwheels. Thanks to the wind this spot gets, you’ll find many families flying kites, too—kites can be purchased onsite.

EAT> Paju is best known for its soybeans, grown in the Jangdan district along the DMZ. The Korean restaurant at Imjingak does a very good stew (jeongol) with patties made of Jangdan soybean.

The architecturally pleasing Annyeong Café of Pyeonghwa Nuri Park has snacks and coffee, but its views are even better.

STAY>This is a daytrip from Seoul, but if you wanted to stay outside the city for a weekend, try the gorgeous guest house Jijihyang (T. 031-955-0090) in nearby Paju Book City.

GO>  The DMZ Train departs from Seoul Station at 8:30 AM and 1:30 PM. Fare (One Way): KRW 8,700 (weekdays), KRW 8,000 (weekends). No trains on Monday. At Dorasan Station, you can buy an addition KRW 8,700 ticket to tour the Third Tunnel of Aggression and Dora Observatory. Be sure to bring your passport or Alien Registration Card!