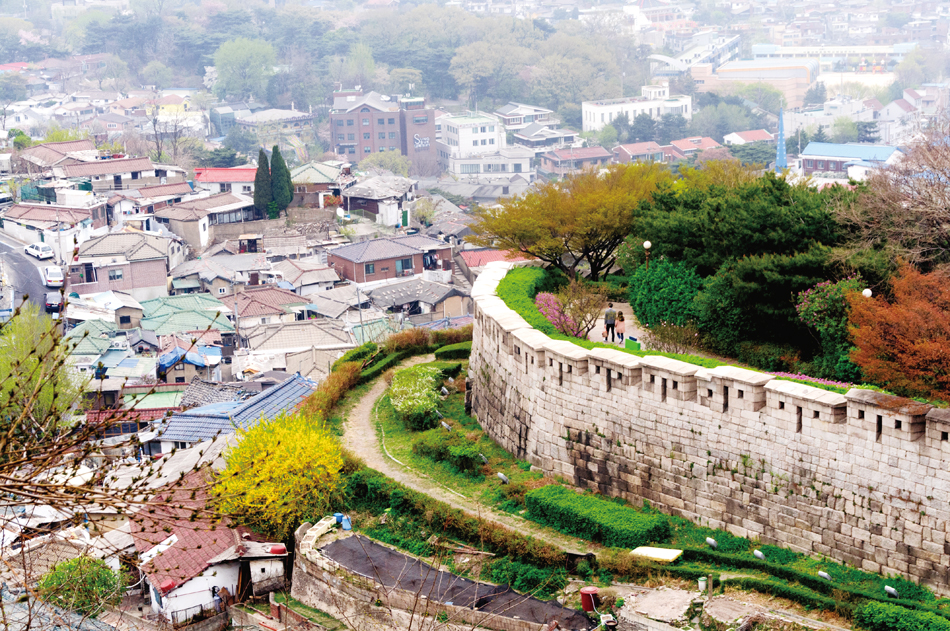 [box_light] Scent of Spring in Seongbuk-dong

Nestled away in the hills just north of Seoul’s old city wall, the charming neighbourhood of Seongbuk-dong is one of Seoul’s best kept secrets. With lovely gardens, historic homes and a rich cultural heritage, the district is an oasis of tranquility in the very heart of the city. In May, when the spring blossoms erupt and the hillsides transform into a magical tapestry of color, the neighborhood makes the perfect weekend getaway, a place to unplug and walk amidst the hues, sounds and scents of spring.

Most visitors begin their exploration of Seongbuk-dong with a visit to the Choi Sunu House, an early 20th century hanok home hidden in an alleyway just off Seongbuk-dong’s main street. Full of flowering trees, craggy pines and well-placed masonry, the gardens are truly a delight in spring. The halls contain a few displays of items once belonging to the former owner of the home, late art historian and National Museum of Korea director Choi Sunu (1916–1984). The house is now operated by the National Trust of Korea, a civic organization dedicated to historical preservation. Entry (10:00–16:00) is free, but the home is closed on Sundays. It is also closed from December to March. On May 24 (1 PM), it will host a DJ’d discussion where participants can share their life stories through music.

On the other side of the main street from the Choi Sunu House is the site of the Seonjamdan, a Joseon Dynasty shrine where annual rites were held in honor of Leizu, the goddess of silkworms and, according to legend, the founder of sericulture. A red, wooden ceremonial gate marks the entrance to shrine site, while a raised stone altar marks the spot where the rites were held. The path leading from the gate to the altar is lined by about 50 fantastically gnarled mulberry trees.

A short walk along the main road from the Seonjamdan Shrine site brings you to the entrance of the Gansong Museum of Art, one of the world’s finest repositories of Korean traditional art. Korea’s first private art museum, it was founded in 1938 by art collector Jeon Hyeong-pil, who spent much of his private wealth to prevent foreign art collectors from pillaging Korea’s artistic treasures. The museum usually holds exhibits twice a year, in May and October, but it is currently undergoing a major renovation. Its treasures, meanwhile, are on display at the newly opened Dongdaemun Design Plaza (see p. 10).

Continuing along the main road will bring you to the Seongbuk Museum of Art, a landmark where you’ll also find the Seongbuk Global Village Center on the first floor. Hidden in a clump of trees next door, however, is the traditional teahouse Suyeon Sanbang. This exquisite turn-of-the-20th-century hanok house was the home of Yi Tae-jun (1904–circa 1970), one of Korea’s first modern novelists. The house, designed by Yi himself, has been perfectly preserved by his descendants. If you’re lucky, you might get a seat in the house’s elevated wing, with views of the courtyard garden. It can get quite busy on weekends, but on a quiet weekday, there may be no finer place in the land to enjoy a cup of tea.

Keep heading up the main road, and on the left side you’ll spot a hillside path with steps leading to the Simujang, the home of Buddhist monk, poet and independence activist Han Yong-un (1879–1944). Han moved to this secluded spot not long after getting out of Seodaemun Prison, where he did a three-year stint for his leading role in the March 1 Independence Movement of 1919. It’s a simple hanok house, but one shaded by a giant ancient pine at the entrance. Unlike most Korean hanok, which face south, this one was built facing north so that Han would not have to face the hated Japanese Government-General Building, which was located to the south in Gwanghwamun.

The trail to the Simujang continues up past the house to the crest of the hill, which is topped by Seoul’s old fortress walls. Along the way, the route will take you through Bukjeong Village, a hillside community of humble homes that’s something of a throwback to the Seoul of decades past. One of the empty homes has been transformed into a local art museum currently displaying old photos taken in the community. If you move onward to the fortress wall, you’ll meet up with the Seoul Fortress Wall Trail, an 18.7 km hiking trail that takes you along the entirety of the old city wall. The section overlooking Seongbuk-dong offers some fantastic views over the neighborhood and is well worth the diversion.

Hidden gardens on the hillside

On the other side of the valley from Simujang (warning: it’s quite a long walk), on the road to Mt. Bugaksan, is the infinitely pleasant Buddhist temple of Gilsangsa. Gilsangsa’s architecture is atypical for a Buddhist temple, and for good reason: Until the 1990s, it was a yojeong, or a high-class restaurant where the rich and powerful ate, drank and were entertained by gisaeng, young women trained in Korean traditional dance and music. In 1987, the owner, herself a former gisaeng, offered the restaurant to the Ven. Beopjeong, one of Korea’s greatest Buddhist monks. The place was transformed into a temple, which opened in 1995. The tranquil, wooded site is a great place to relax and lose yourself in the sounds, sights and scents of nature. There’s a public mediation hall open to all, but there’s also an outdoor mediation spot in a wooded area overlooking a deep valley. The temple offers Templestay programs, too: See the website (www.kilsangsa.info) for more details.

From Gilsangsa, head up and east, following the main road along the ridgeline. This will take you through an upscale neighborhood that’s also home to many foreign diplomats. Eventually you’ll reach Samcheonggak, a pleasant cultural space, restaurant and café that, like Gilsangsa, was originally a yojeong, built as a venue for secret talks between South and North Korean officials in 1972. As remote a location as you’ll find in downtown Seoul, it’s home to wonderful gardens and forests, and its terrace café offers inspired views of downtown Seoul and the surrounding mountains. Now run by the Sejong Center for the Performing Arts, Samcheonggak hosts regular performances of Korean traditional music and dance. Its Korean restaurant is highly regarded, too. As an added bonus, it has free shuttle bus service to downtown Seoul.

EAT> Seongbuk-dong does not lack for things to eat and drink. As you walk about, you’ll pass plenty of eateries and cafés, some more upscale than others. The neighborhood is particularly known for its donkkasseu (Japanese: tonkatsu), Japanese-style pork cutlets that are breaded and fried. This writer is a fan of Geumwang Donkkaseu (T. 02-763-9366), near Suyeon Sanbang. Another local specialty is the gisa sikdang (“driver restaurants”), which serve generous portions of Korean pork bulgogi and side dishes at very reasonable prices. These places originally targeted solo diners, taxi drivers in particular. A good one to try is Ssangdari Gisa Sikdang (T. 02 743-0325).