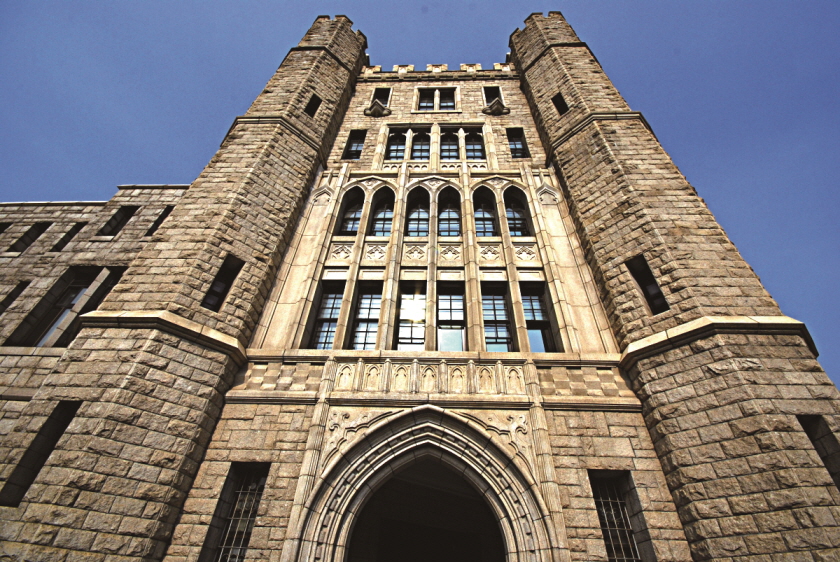 In the 1930s, Seoul expanded rapidly beyond the Seoul City Wall into the fields and hills that surrounded the city. A walk from Korea University to Kyung Hee University, both located in a hilly area with lots of greenery, makes for a pleasant walk rich in history and culture.

To begin the walk, leave Korea University Station 고려대역 (Line 6), Exit 1. The exit takes you into the Korea University campus 고려대학교, with the Gothic and imposing Main Hall 본관 (1934) and Main Library 중앙도서관 (1937) in the background. After seeing the buildings and the campus grounds, stop by the Korea University Museum on the way back to the subway station (10am–5pm, closed Monday); it is one of the most extensive university museums in Korea. Until May 12, 2013, the museum is holding a special exhibition of Joseon Dynasty (1392–1910) screens depicting Changdeokgung Palace in great detail. The museum also has an exhibition on university history, the first of its kind in Korea.

Behind the museum lie two royal tombs—Yeonghwiwon 영휘원 and Sunginwon 숭인원 (9am–6:30pm, closed Monday)—of Sunheon, the first concubine to King Gojong, and Ijin, the infant son of Yeongchin, the last crown prince of the Joseon Dynasty. The extensive grounds contain a number of lovely statues and offer a brief look at the architecture of royal tombs. Collectively, the two tombs are known as Hongneung because the tomb of Queen Myeongseong, who was murdered by the Japanese in 1895, took this name. Her tomb was moved to its current site in Namyangju when King Gojong, her husband, died in 1919.

From the tombs, return to the entrance of the museum, turn right, and keep going straight until the street makes a curve. Turning left here takes you past a lively commercial strip catering to students and into the campus of Kyung Hee University 경희대학교, a major private university with three museums and garden-like grounds. The most interesting museum is Hye- Jung Museum 혜정박물관, the only old map museum in Korea (10am–4pm, Monday–Friday). Located on the 4th floor of the university library, the museum has an outstanding collection of old maps on Korea. The Natural History Museum 자연사박물관 is the first of its kind in Asia (10am–4pm, Monday–Saturday). The Central Museum 중앙박물관 (10am–5pm, Monday– Friday), also located on the 4th floor of the library, contains mostly archaeological artifacts, but it also has an interesting exhibition on Korean shamanism.

After leaving the university and returning to the curve in the road, turn left and go straight until you come to a busy intersection. Cross the street and look for alleys lined with restaurants selling pajeon 파전, a wonderful pancake-like dish with onions and seafood that is usually served with makgeolli 막걸리 (rice wine). The area is known as Pajeon Alley 파전골목 and caters to the large number of students who live in the area. Hoegi Station 회기역 (Line 1) is very close and marks the end of the walk.