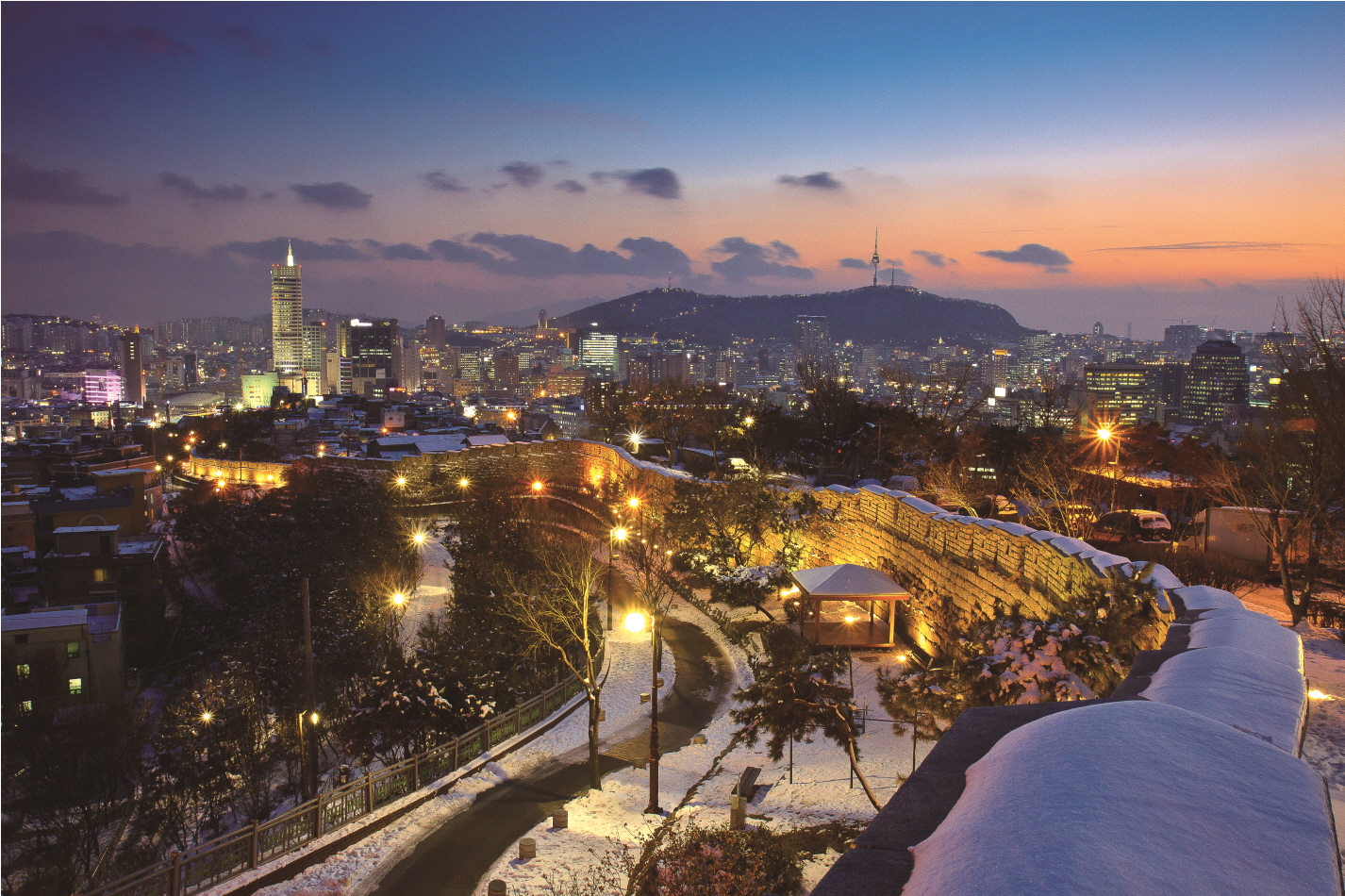 Seoul is not often thought of as a walking city. Traffic is heavy, sidewalks are crowded, and cars and pedestrians are forced to share more side streets. In recent years, the city has done much to improve the situation by restoring covered streams and creating a variety of walking courses. One of the most prominent efforts is the restoration of the Seoul City Wall that surrounds the historic heart of the city.

First built in 1396, the City Wall was designed to create a psychological division between the city and country. The wall was built only four years after Seoul became the capital of the new Joseon Dynasty (1392–1910). The original wall was built in a hurry and was rough in many places. In 1422, King Sejong the Great, who is famous for inventing the Korean writing system, hangeul, sponsored a massive reconstruction of the wall that involved 300,000 workers from all parts of Korea. The wall fell into disrepair after the Japanese invasions of 1592 and 1598. King Sukjong sponsored another rebuilding project in 1704.

The 20th century was hard on the wall. During the Japanese colonial period (1910–1935), the colonial rulers destroyed large parts of the wall as Seoul grew beyond its traditional borders. Rapid population growth in the 1950s and 1960s put further pressure on the wall. Recognizing the value of the wall, the first major preservation efforts began in 1976, and they have continued since then as budgets permit. In recent years, efforts have focused on rebuilding destroyed parts of the wall and developing walking courses to make the wall more accessible.

One of the best ways to explore the wall is to walk along the eastern sections, starting at Hyehwamun Gate, one of four small gates in the wall and near Exit 4 of Hanseong Univ. Station 한성대입구역 (Line 4). The entrance to the wall offers a view of the reconstructed gate. As laid out in 1396, the wall had four large, or “great,” gates and four smaller gates. The large gates sat on the four points of the compass, and the smaller gates on the intermediate points. From the entrance, keep uphill along the wall until you reach Naksan Park. The park sits on the highest part of Mt. Naksan and offers spectacular views of the city and the mountains in all directions. From here, the walk is downhill. As you walk, take note of the different shapes of the stones in the wall and the different layers. The original wall was built largely of boulders, but later sections of the wall were built with more finely cut stone blocks.

Walking downhill from Naksan Park, you will come to the back entrance of the interesting Ihwa Mural Village, a public art project centering on colorful wall murals that was one of the first such projects in Korea. Theneighborhood contains several cafés that make for a good rest in the middle of the walk.

Returning to the wall, the walk continues downhill until you reach Honginjimun, the Great East Gate (Dongdaemun). The current gate dates from 1869 and was part of a mid-19th century rebuilding boom that included much of Gyeongbokgung Palace. This section of the wall ends at Honginjimun, but recently excavated parts of the wall have been incorporated into the nearby Dongdaemun History and Culture Park. The park sits on the site of the old Dongdaemun Stadium, which was the largest sports venue in Seoul until the opening of the Olympic facilities in Jamsil in mid-1980s. Remnants of the wall and other historical relics have been preserved in the park. The park lies at the center of the Dongdaemun Market area, with its many interesting places to eat and shop.

Subway Lines 2, 4, and 5 all stop at Dongdaemun History and Culture Park Station 동대문역사문화공원역, offering easy access to other parts of the city.