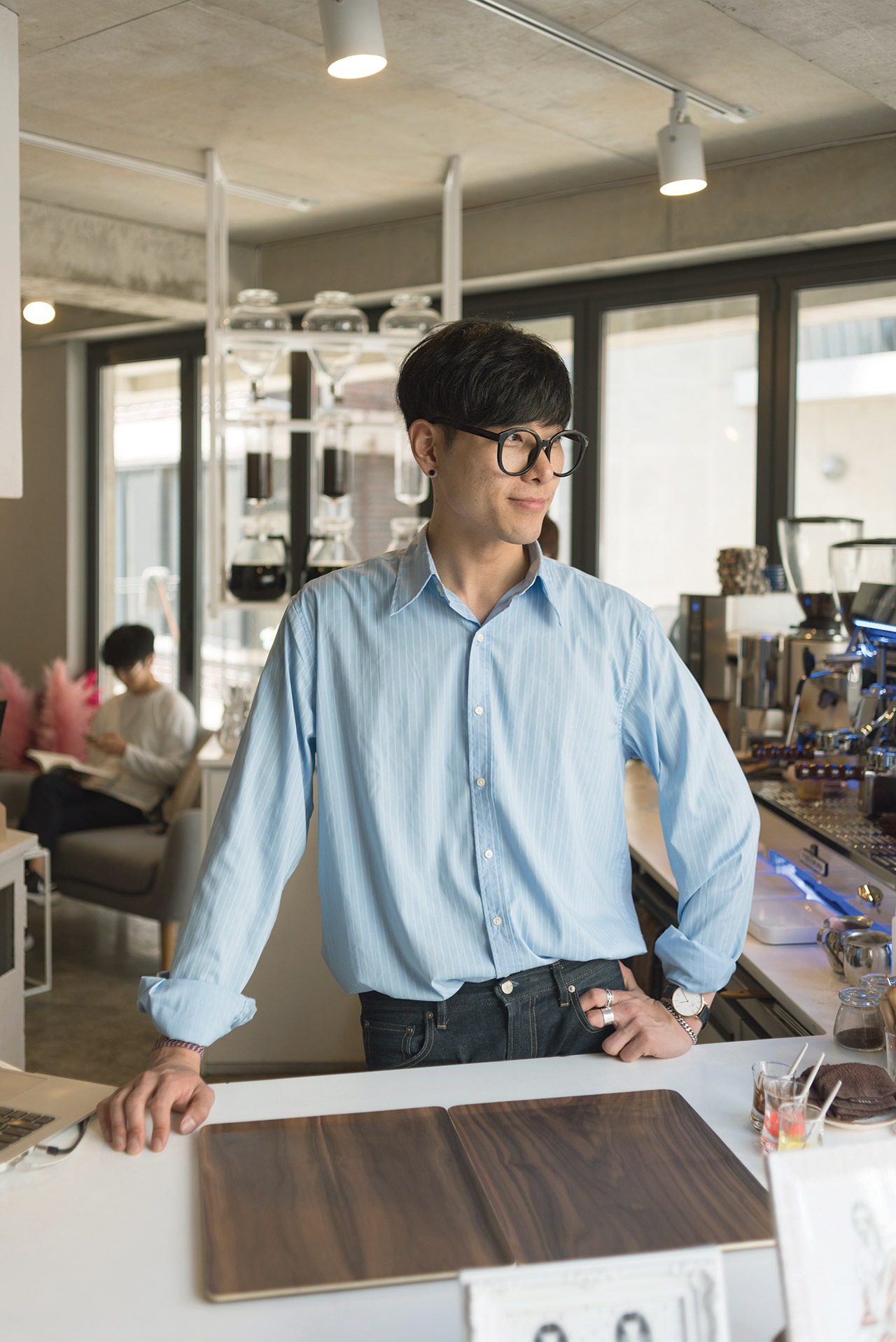 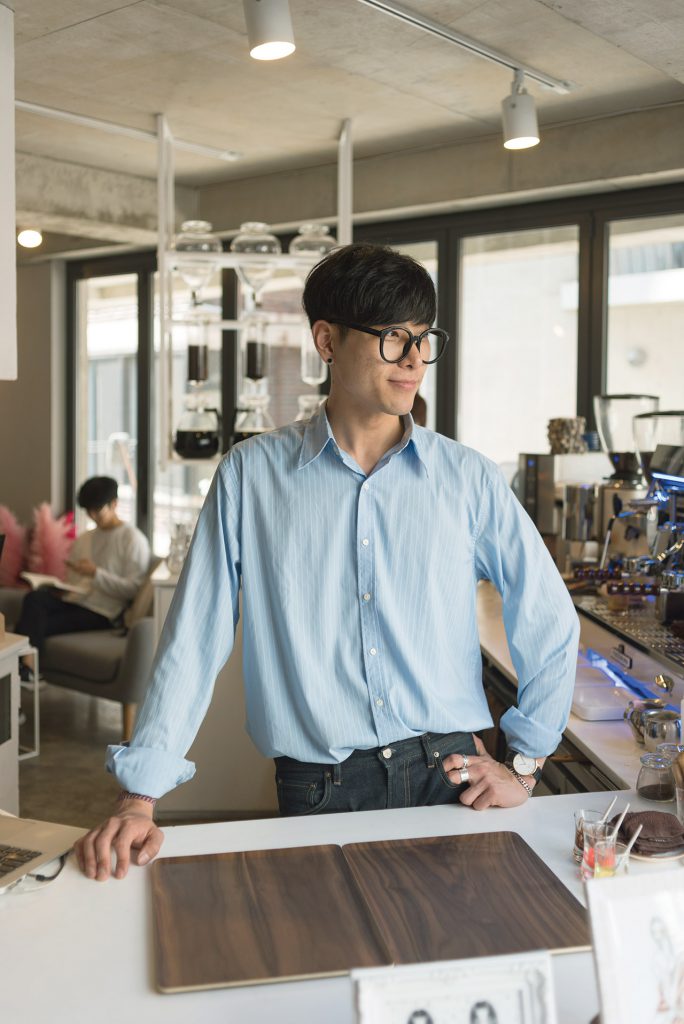 “I developed cremart. I developed it and spread the recipe globally through the internet because I want a coffee product developed in Korea to be available in every café worldwide. In Korea, many people want to be the only one to sell something, maybe have a patent on something. I, however, want to change the coffee market.”

Barista Lee Kangbin is no mere purveyor of coffee. What he creates at his café, armed with little more than a thin metal rod and some food coloring, is drinkable fine art. So mesmerizing is his work that it has gone viral, with global media giants like Cosmopolitan, TIME, Vice and the Daily Mail running profiles on him and his art. Cosmo effused, “But while most baristas can easily manage a heart or flower out of steamed milk, Korean ‘coffee artist’ Kangbin Lee is taking latte art to the next level-and the results are jaw-dropping (…so you can guzzle the coffee faster).”

It’s a normal afternoon at Café C.Through, which is to say, the trendy Gyeongnidan coffee house is packed. With its tastefully uncluttered interior and, of course, its creative lattes, the café is a veritable Instagram factory. Customers – young, overwhelmingly female and almost all impeccably dressed – gab, sip coffee and snap photos with their smartphones, the click of the shutter spicing up the hum of the background chatter.

Tall, thin and sporting a pair of round, horned-rim glasses, Lee looks every part the hip barista. His youth belies a decade in the coffee business. “I got my start early,” he recalls. “I started at 18. Because I thought you should work before doing other things, I originally dreamed of becoming a chef. I felt there were too many chefs in Korea, though, that the profession was more of a ‘red ocean’ than I thought. I wondered where a new ‘blue ocean’ might be. Baristas were stating to get noticed in Korea at this time.”

Korea is now the world’s 11th largest coffee market. According to Statistics Korea, the national statistics bureau, the average Korean drinks 428 cups of coffee per year. There are 88,500 cafés around the country. In Seoul’s posh Gangnam area, one of every two buildings has a coffee shop.

In 2002, however, when Lee first got into the bean business, coffee was still a relatively new thing. Nonetheless, Lee saw in the rich, aromatic beverage not only a future national obsession, but also a career. In high school, he built his own coffee roaster to roast beans. When he entered the military to perform his mandatory national service at the age of 21, he brought his coffee machine to his deployment near the DMZ. “I was a bit unusual,” he says. 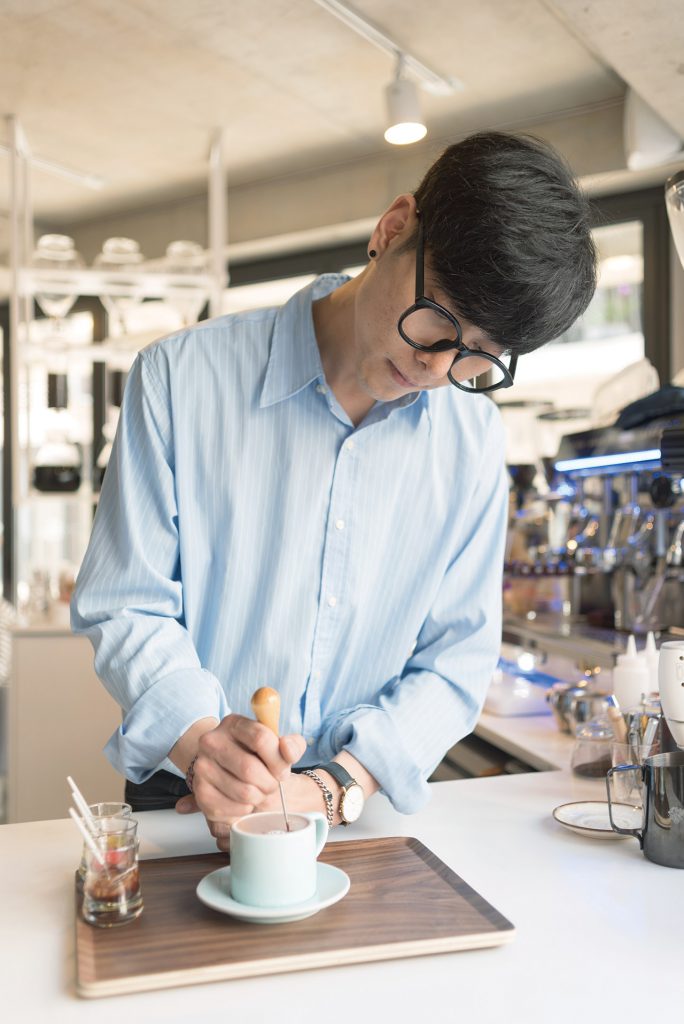 Not your father’s latte art

It’s Lee’s contributions to “latte art” that have made him a global sensation. “A Korean barista is creating miniature masterpieces inside cups and coffee mugs,” writes the Daily Mail. TIME writes that his latte art “basically belongs in a museum.” It adds, “In fact, the labor-intensive works of art are so stunning, it could be easy to forget that they sit atop lattes.”

Latte art, traditionally defined, involves either the pouring of steamed milk into a shot of espresso to create aesthetically pleasing designs or the drawing of patterns into the layer of milk foam atop the espresso. As the term “latte art” would imply, it’s a craft that requires skill, dexterity and creativity. Korean baristas have been at the forefront of the genre. Um Paul, the 2016 World Latte Art Champion, is Korean; Caleb Cha of Australia, the 2015 champion, was born in Korea.

Lee’s work, however, differs from traditional latte art by adding vibrant colors to what had been a strictly two-tone genre. Cremart (“cream art”), as he calls his technique, involves drawing on a thick, white canvas of cream that has been poured atop a base of cold brewed coffee. Lee uses thin metal rods and common food coloring to produce mesmerizing, incredibly detailed drawings. His art ranges from drawings of pop icons like Snoopy and Belle and the Beast from Disney’s “Beauty and the Beast” to reproductions of classic works of fine art like like van Gogh’s Starry Night and Edvard Munch’s The Scream.

His personal favorite is the van Gogh. He says, “Because customers like it best, I, too, have come to like it best.”

Although Lee has been studying and creating latte art for seven years, cremart is his own creation. “About three or four years ago, I wanted to make my own signature beverage, so I thought about it a lot,” he recounts. “I had a lot of experience with coffee, so I thought I should come up with a cup of coffee that was not simply pretty, but more stylish and tasty. So I pondered how I could create coffee that was both pretty and tasted good.”

Like revenge, a cremart beverage is a dish best served cold. “Hot coffee grows less tasty as time passes,” Lee explains. “It takes a long time to make these drawings, however, so cremart is always served cold.” In fact, maintaining the beverage’s cold temperature is the most important factor in its making.

The barista’s art is especially remarkable considering that he has no artistic training, formal or otherwise. “I’ve never learned how to draw,” he says. “I just had an interest; I’ve never studied art or attended an art academy.”

When explaining why Koreans excel at latte art, Lee points to several factors. Firstly, he says, Korea has a lot of people who are dexterous, visually oriented and able to communicate scientifically. Also behind the success is a culture of sharing. “While baristas here compete with one another, many are friends,” he says. “They share what information they have and gather together to have latte art competitions. In this way, they’ve shared what they know in a friendly way, allowing the latte art scene to grow a bit quicker. Now basic information on latte art is everywhere, and people studying latte art have an easier time.”

Lee documents his artistic activities on Instagram, where he has nearly 1.6 million followers. A solid social media presence is a must in the coffee-slinging business nowadays. His café, filled with customers mugging for selfies, is proof positive of this. “Before, a café drew crowds just as long as the coffee was good,” he says. “Nowadays, customers really care about the interior design. Your place can get hot only if it has good interior design, if it’s a space worth photographing.”

While cafés are ubiquitous in Korea, the nation’s café scene differs from that of Europe, North America and elsewhere in several regards. In coffee superpowers like Italy and Australia, cafés open early and operate only until the afternoon. Customers visit in the morning, drink their coffee and go on with the rest of their day. Koreans, however, head to cafés after work, usually around 6:00 or 7:00 in the evening. In the West, people just dip into the random cafés they pass on the street. For Koreans, however, going to a café has become like going on a tour. You set a time and date with friends to venture fourth to a pre-selected coffee house. “In the old days, only people who liked coffee drank coffee,” says Lee. “Now people go on coffee tours. They go to this café to enjoy a certain atmosphere, and then another one to enjoy a different atmosphere.” 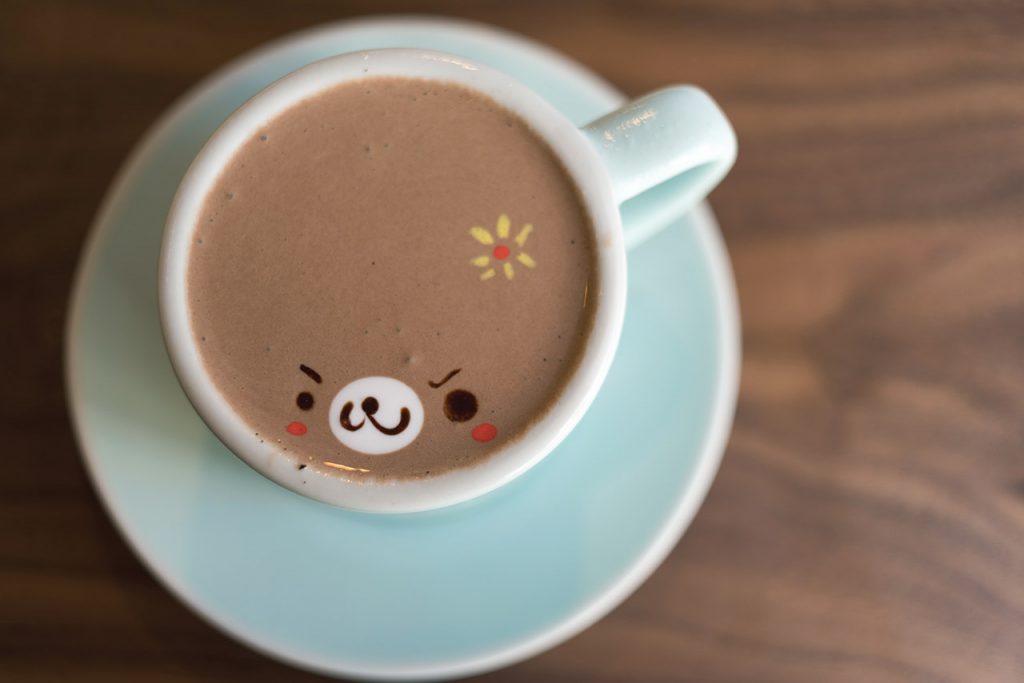 Lee makes well-balanced coffee that is, in his words, “easy to drink.” While specialty coffees may have their passionate fans, many people find them impossible to drink. Making coffee that pleases everyone, however, can be a difficult task. “Coffee is a personal beverage,” he says. “Even though a variety may very well suit your tastes, it could taste bad to somebody else, regardless of how expensive it is.”

What Lee really wants to do is set baristas free to express their inner artists. “Baristas have a lot of artistic talent,” he says. One need only look at a cup of his cremart to see the truth in this. “I thought about what kind of coffee product could make use of this talent. I developed cremart so that baristas could use their artistry. Now I’m promoting it overseas, too.”

FYI: Lee’s cremart creations, with the exception of the brown bear one, require a reservation. Check out his Instagram account (@leekangbin91) or hit his cafe up on Kakao (cthrough) for updates and more information.