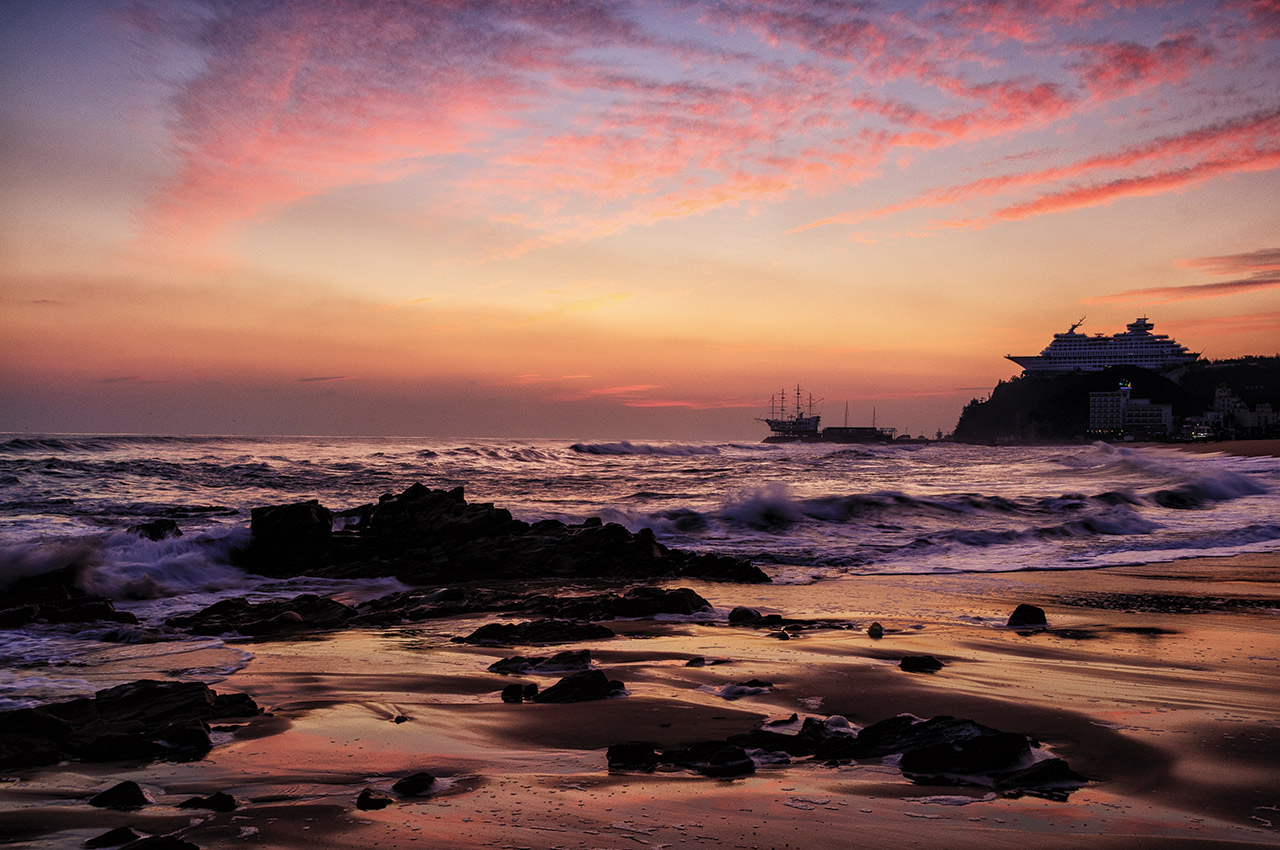 The train pulls into Jeongdongjin at around 4:30 in the morning. Stepping onto the platform, you hear the roar of the waves crashing in the darkness just beyond the station. A cool wind blows in from the sea; the air tastes of salt. It’s another two hours until dawn, so you find a seat in a seaside café and catch up on some reading over a cup of coffee.

After about an hour, the sliver of purple appears on the horizon. People begin gravitating to the beach as the sky illuminates in myriad hues of purple and pink, the art reflected in the waters below. Finally, the orb of the sun rises from the ocean’s depth. The landscape turns into a canvas of orange and gold, punctuated by the black silhouettes of rocks and cliffs.

Another day begins in Gangneung.

Nestled in the narrow coastal strip between the rugged Taebaeksan Mountains and the East Sea, Gangneung has been one of Korea’s best loved travel destinations for centuries. In the days of the Joseon Dynasty, wealthy aristocrats from Seoul made the long trek through the mountains to bask in Gangneung’s seaside charm. Today, people come to relax at the beach, hike in the pine forests, enjoy some fresh seafood or sip one of the town’s increasingly famous cups of coffee.

According to the Guinness Book of World Records, Jeongdongjin Station holds the distinction of being the world’s closest train station to a beach. It opened as a whistle stop on the industrially important Yeongdong Line in 1962, but by the 1990s, it was so infrequently used that authorities considered closing it. In 1995, however, it appeared in the hit TV series “Sandglass,” and soon after, tourists began flocking to the rustically charming train station on the sea.

Sadly, Jeongdongjin isn’t as rustic as it used to be. The tourism boom has given birth to a park, cafés, pubs and a pair of very gaudy ship-shaped structures on the horizon – one is a hotel, and the other is a coffee shop. It’s still one of the most romantic sunrise spots in the country, though. In particular, thousands visit on New Year’s Day to take in the first sunrise of the year.

For a very different sunrise experience, head to Jumunjin, a fishing cove several kilometers north of downtown Gangneung. At the waterfront, dawn is the busiest time of day as crews hurriedly unload the night’s harvest before the morning auction, when local merchants and restaurants bid on the fresh catch. Foodies will tell you the sprawling Jumunjin Seafood Market is one of the best places to score fresh, cheap seafood. Even if you’re not a fish person, the sights and sounds are worth the early wake-up. One of eastern Korea’s administrative centers for centuries, Gangneung exudes gentility. The town has produced more than its fair share of thinkers, statesmen and artists, and it’s proud of it.

Gangneung’s most famous residents were the Joseon Dynasty philosopher Yi I (1536-1584) and his mother, the artist, calligrapher and writer Shin Saimdang (1504-1551). Scholars consider Yi to be one of the Joseon Dynasty’s two greatest Confucian thinkers, along with his near contemporary Yi Hwang. Shin was an accomplished artist who was long held up as the model of Confucian womanhood. Tellingly, the portraits of both Yi and Shin adorn banknotes: the KRW 5,000 and KRW 50,000 notes, respectively.

Their old home, the Okjuheon, is a short drive outside of town, just off the road to Gyeongpo Beach. Much of the historic villa, named for its grove of black bamboo, is a modern restoration, but a handful of original structures reveal the simple elegance of the era.

A 10 minute walk from the Okjuheon is the Seongyojang, one of the largest surviving Joseon Dynasty manors in the country. It’s no mere museum piece, either. The sprawling mansion has been the home of the Naebeon Yi clan for 10 generations, and members of the family reside in it to this day. Its lotus pond, overlooked by a handsome wooden pavilion, is a masterpiece of Korean architecture.

Downtown Gangneung has its history, too. In the heart of the old downtown are the Chilsadang, a 19th-century government office, and the Imyeonggwan, a Joseon Dynasty guesthouse. The later’s gate, erected in the late Goryeo Dynasty (918-1392), is one of Korea’s oldest wooden structures. The old downtown has many charming old alleyways lined by weathered colonial era buildings, some of which have been re-purposed as cafés and other cultural spaces.

A cup of coffee by the sea

A six kilometer stretch of white sand and craggy pines separating Gyeongpo Lake from the sea, Gyeongpo Beach is especially busy in summer, but it’s beautiful all year round, even in winter, when people come to introspect amid the wind and whitecaps. Some of Gangneung’s most popular hotels line the beach.

Gyeongpo Lake, meanwhile, is a large lagoon that doubles as a large natural mirror on a calm day. You can enjoy the best views of the lake from Gyeongpodae, a large wooden pavilion built on a hillock overlooking the water. Poets have lauded the lake’s moonscapes for ages. More recently, the lake has become a popular spot for local bicyclists. You can rent a bike from one of the shops near Gyeongpo Beach. Near the lake are some scenic marshlands and even a field of cosmos flowers.

Gangneung also enjoys a reputation as one of Korea’s premier coffee capitals. The local coffee tradition began in the 1980s, when the coffee machines along quiet Amnok Beach proved a hit with visitors. In the 1990s, several of Korea’s first generation of professional baristas set up shop in Gangneung, opening famous coffee shops like Cafe Bohemian and Terarosa. The city’s reputation for coffee grew from there. Amnok Beach is now lined with a mixture of independent and chain cafés. This writer enjoys Bossa Nova, which has a high rooftop space where you can enjoy your coffee with the wind and a view of the sea. There are plenty of great little cafés in the downtown area, too, including Bonbon Roastery (봉봉방앗간), a renovated old mill in an alley near the Imyeonggwan.

STAY> Gyeongpo Beach is where you’ll find many of the higher-end hotels, including the Seamarq (T. 033-650-7000). Jeongdongjin’s Haslla Museum Hotel (T. 033-644-9414), run by a husband-and-wife team of sculptors, is part hotel, part installation art and Gangneung’s most unique place to stay. A more traditional option is the Seongyojang’s B&B program (www.knsgj.net).

EAT> The local specialty is chodang sundubu, a soup made from tofu mixed with seawater. Diners with less adventurous palates will love it. Chodang Sundubu Village, hidden in the pine forest near Gyeongpo Beach, is the place to find it.

Reconceptualizing the Traditional
Scroll to top