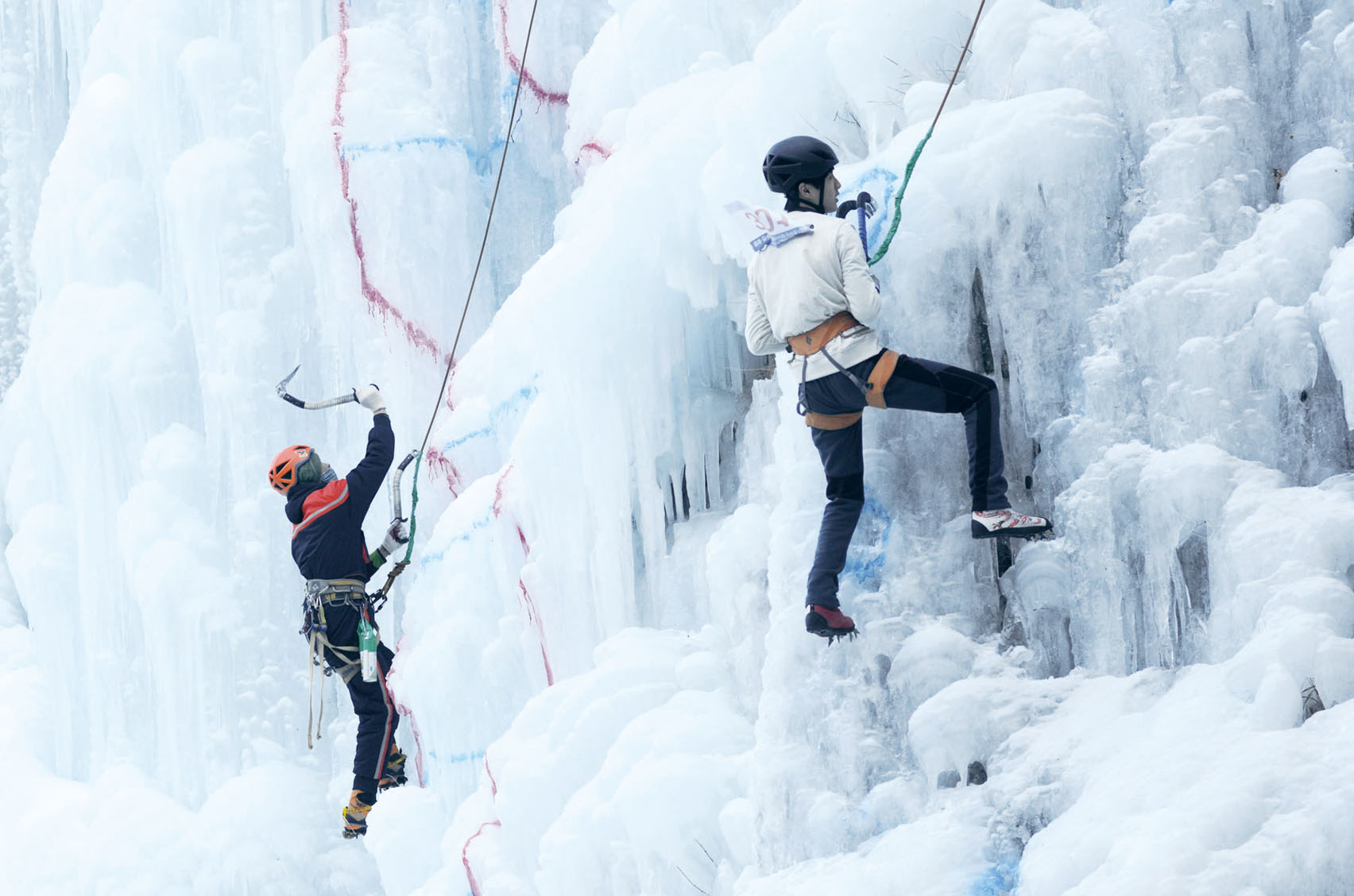 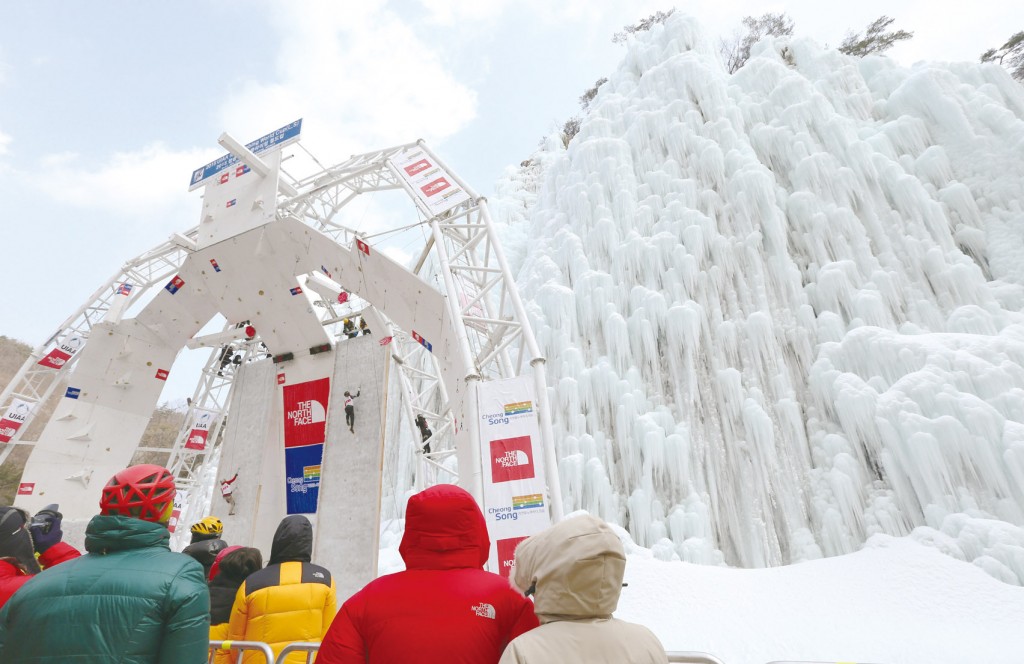 Booming. That’s how South Korean journalists have described the country’s current winter sports scene. More people than ever have started skiing, snowboarding and skating. Significant investments have been made into new ski resorts like Alpensia, and domestic equipment manufacturers have suddenly popped up trying to profit from the new market. Fuelling this current explosion is a series of achievements by the nation’s top athletes at past Winter Olympics and the successful bid for the upcoming 2018 Winter Olympics in PyeongChang.

Organizers are optimistic that the next Olympics will drive more participation, creating a powerhouse of winter athletes. There is one sport, however, that seemingly does not need Olympic glamor to attract participants: ice climbing. In a country where mountains cover 70 percent of the land, mountain climbing is a passion for many Koreans. Locals have been climbing in the icy canyons of Mt. Seoraksan since as early as the 1970s. Over the years, enthusiasm for the sport swelled. Then climbers began to test their ice skills in the high altitudes of the Himalayan mountains with success providing inspiration for more people to try ice climbing.

The continued popularity encouraged regional districts to finance ice parks where artificial waterfalls are constructed for the sole purpose of freezing them in the winter. The result is a dazzling wall of ice made specifically to be climbed. These parks were a major advancement in Korean ice climbing, large enough to attract international attention. Of these ice parks, the most internationally recognized belongs to the small county of Cheongsong in the province of Gyeongsangbuk-do. 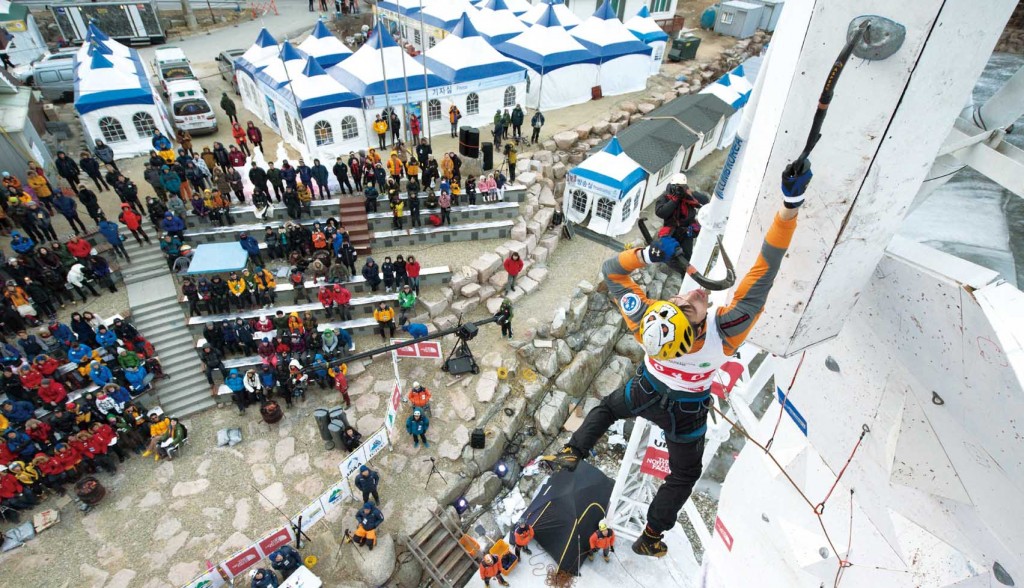 Speed climbing in a Slow City

Sheltered from the hustle and bustle of modern Korea, Cheongsong is tucked within a maze of mountains and valleys of the Taebaeksan range. Cheongsong is five hours away from Seoul and four hours from Busan, Korea’s two largest cities. In contrast to those metropolitan areas, the pace of life here is refreshingly calm. The county is a member of Cittaslow International and aspires to the goals of the Slow Movement founded by Paolo Saturnini. As a member city, Cheongsong is dedicated to increasing the quality of life by embracing a slower lifestyle that focuses on quality as opposed to quantity. In particular, preservation of the natural environment and traditional craftsmanship are key principles, exemplified in the production of ceramics and mulberry paper and the natural dyeing methods for which the area is known.

For most of the year, life in the idyllic county proceeds in tranquillity with the residents savoring the fine food and gentle environment that comes with a slower pace of life. In winter, however, things change. The frigid Siberian-High pressure system creeps in and covers the green forests in layers of white snow. When crashing waterfalls come to a standstill, frozen into sculpted pillars of ice, a coarse grating sound comes from the distance. Across oceans and continents, ice warriors begin to file the tips of their ices axes and crampons into decisive points preparing to descend upon the quiet county for the Ice Climbing World Cup.

Since 2011, Cheongsong’s ice park at Eoreumgol (Ice Valley) has been the venue for the Asian segment of the International Climbing and Mountaineering Federation (UIAA) Ice Climbing World Cup (www.iceclimbingworldcup.org), the world’s premiere ice climbing competition circuit. This year the event organizers, the Korean Alpine Federation (KAF) and the county of Cheongsong, will host the second stage of the world circuit and the Asian Championships from Jan. 15 to 17. The three-day event will see athletes from around the globe battling to be the fastest, strongest and most technical ice climber in Speed and Lead Climbing competitions. 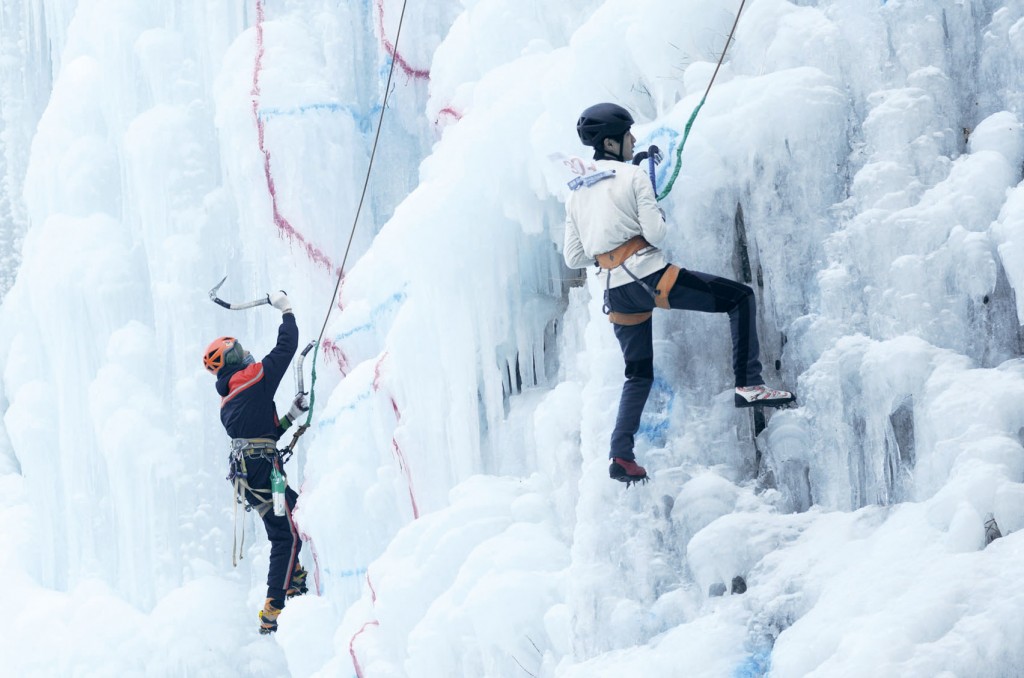 In speed climbing, climbers quickly hack into 25-meter walls of ice with their axes and crampons as they race each other to the top. Like sprinters, speed climbers possess incredible explosive power, so much so that they seem to soar up the walls. In this event, both men’s and women’s divisions are dominated by Russian climbers. One climber to watch in particular is Maxim Tomilov. The Russian sensation competes in both the speed and lead events exceptionally well, winning the overall World Cup title last year and winning this year’s first speed competition in Bozeman, Montana.

Lead climbing, on the other hand, requires a larger skill set as climbers use a variety of techniques with their ice tools to navigate an overhanging climbing structure. The climber who reaches the highest point on the wall wins, and in case of a tie, the fastest time takes the gold. With the potential of big falls with each upward step, the lead event is a thrilling spectacle of acrobatic grace and iron will. Korean climbers thrive in this high tension arena and consistently place in the top five. Last year, Park Hee-yong was second in the overall standings and placed fourth this year in Bozeman. In the women’s division, Shin Woon-seon was last year’s world champion and teammate Song Hannarai was third in the overall standings. 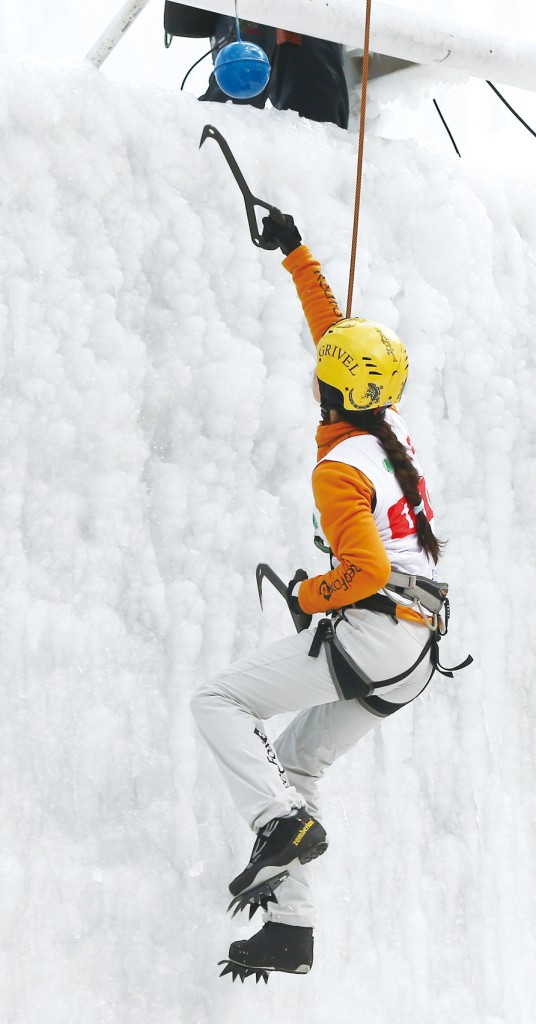 As in previous years, the athletes are sure to put on world-class performances and, as always, the organizers will play gracious hosts. This January, however, there may be a little more to the grace and performance: Earlier in the year, the UIAA, the World Cup governing body, met with the Korean Olympic Committee to discuss the possibility of ice climbing as a demonstration sport at PyeongChang. As a result, the success of this World Cup may sway decision makers. Although the sport does not need the prestige of the Olympics to attract climbers, its inclusion will undeniably advance the sport once again. Considering what has been achieved with Korea’s ice climbing performance thus far, the thought of what could be accomplished with this opportunity is staggering, and it will have all started in a slow little county named Cheongsong.

With the potential of big falls with each upward step, the lead event is a thrilling spectacle of acrobatic grace and iron will.

The ice climbs at Eoreumgol are the result of an artificial waterfall freezing into an impressive wall of ice. The ice usually forms from the end of December to mid February. With an abundance of routes ranging from thirty to sixty meters in height, beginner to advanced advanced climbers will be able to find routes that suit their levels. Climbers, however, will need to know how to lead climb to set up routes. Additionally, since the site is not managed, climbers should approach the area with experience and caution as they would with a natural ice formation.

Aspiring ice climbers or visitors new to the Eoreumgol will find that having a climber with knowledge of the area beneficial. More experienced climbers can find partner on the forums of the KOTR website (www.koreaontherocks.com) or join the Facebook page Korea Climbing CalendAR. Another option is to hire a guide. For guiding services in English, iGuideKorea (www.iguidekorea.com) provides customized tours that include transportation and equipment. Climbers who are thinking of traveling to Eoreumgol to watch the event and ice climb should note that the climbing area will be closed to climbing the days before and after the competition due to World Cup preparations.

Eddy Park is the founder of iGuideKorea providing guiding services to Korea’s outdoor sports scene since 2007. He can be contacted at igk@iguidekorea.com or visit his website at www.iguidekorea.com.

GO> While getting to the event may prove to be a long journey due to Cheongsong’s remote nature, the seclusion and the action-filled weekend are part of what makes it a worthwhile destination. The area is accessible by bus and there are two bus terminals that service the area: Cheongsong Intercity Bus Terminal and Juwangsan Bus Terminal. Upon arrival, head toward the official event hotel, Juwangsan Tourist Hotel (T. 054-874-7000), for more information or head straight toward the ice park, Eoreumgol, to see the action. A PDF with a schedule of the events can be found at www.ice-climbing.kr (English version available).