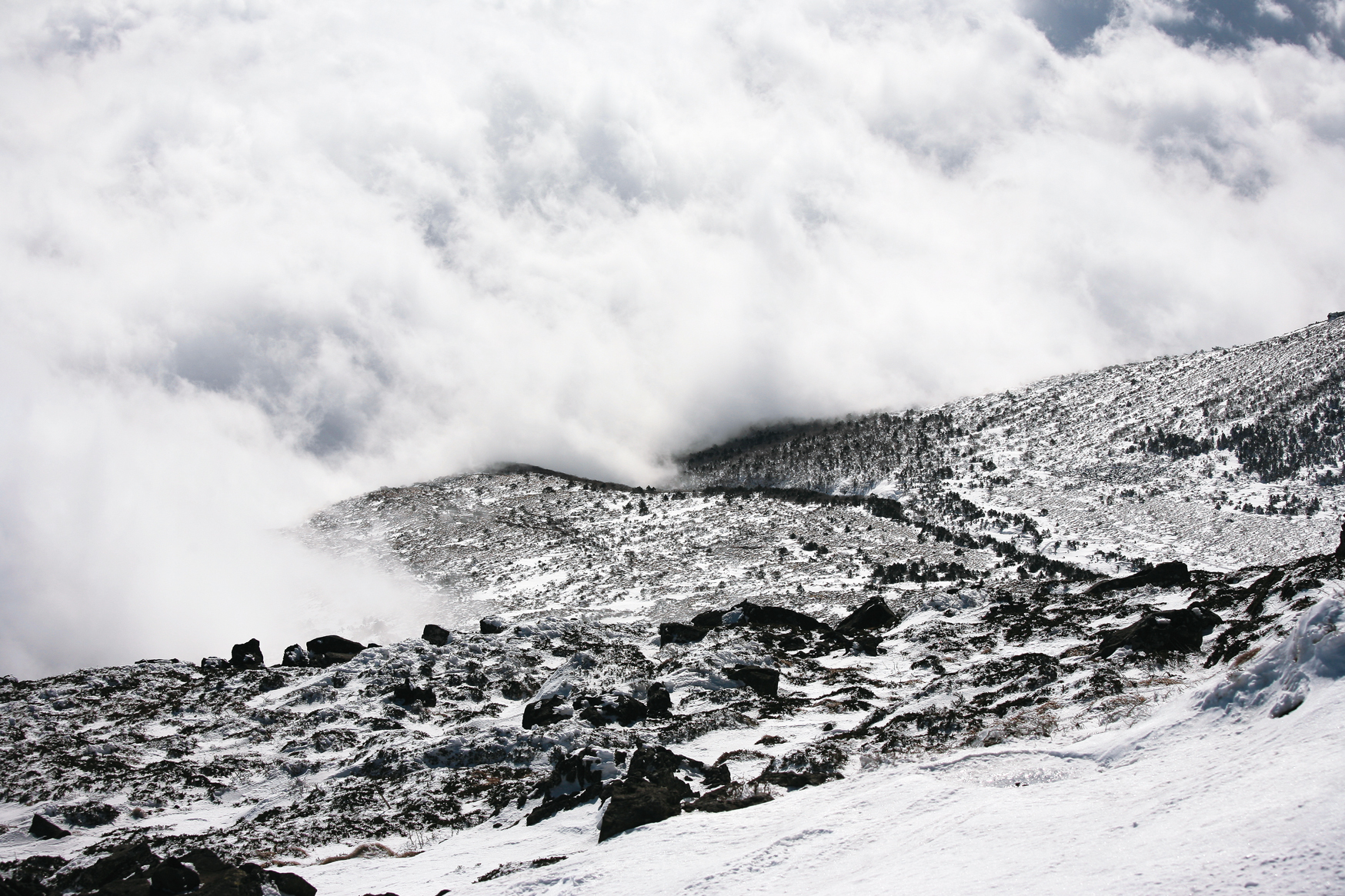 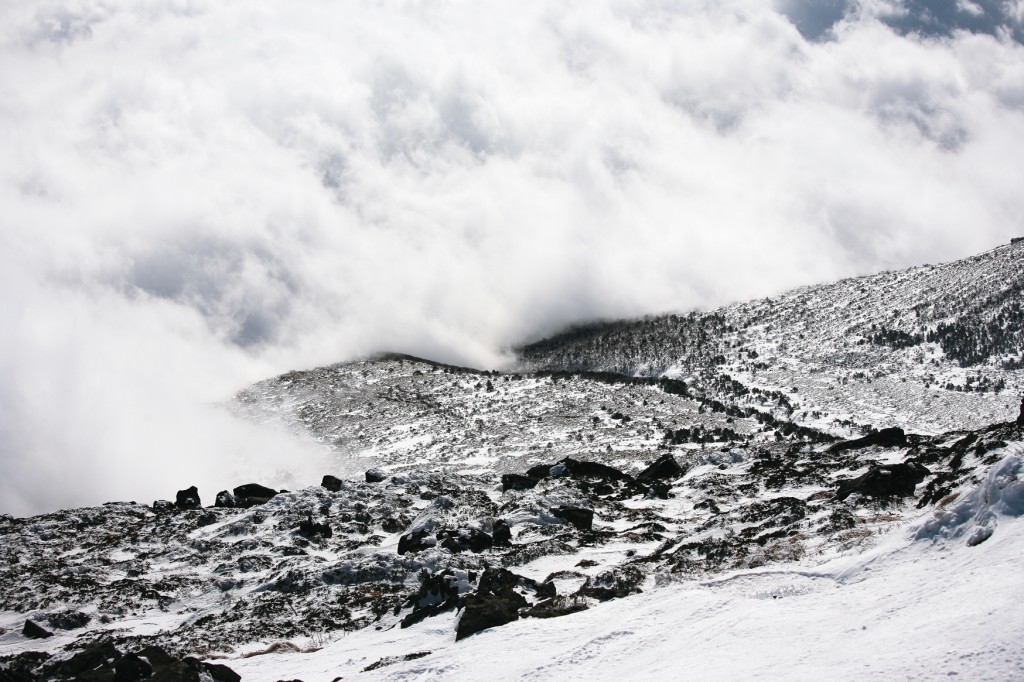 Nothing’s more exciting than a window seat on an early morning winter flight bound for the island of Jejudo. Weather permitting, passengers will see a dazzling display of color as the sun rises over the eastern ridge of Mt. Hallasan, with the light rays pinwheeling through the clouds and fog that regularly mask its peak. It’s an unforgettable sight and a great introduction to one of the island’s main attractions.

At 1,950 meters above sea level, Mt. Hallasan is South Korea’s highest peak and one of its holiest. Famed for its beautiful scenery and panoramic views of the island, the giant shield volcano is the deserved centerpiece of tourism in Jejudo and gets swarmed by trekkers daily. It’s in the winter months, however, when the temperature falls and snow blankets its rocky surface, that the mountain transforms into something truly magical. 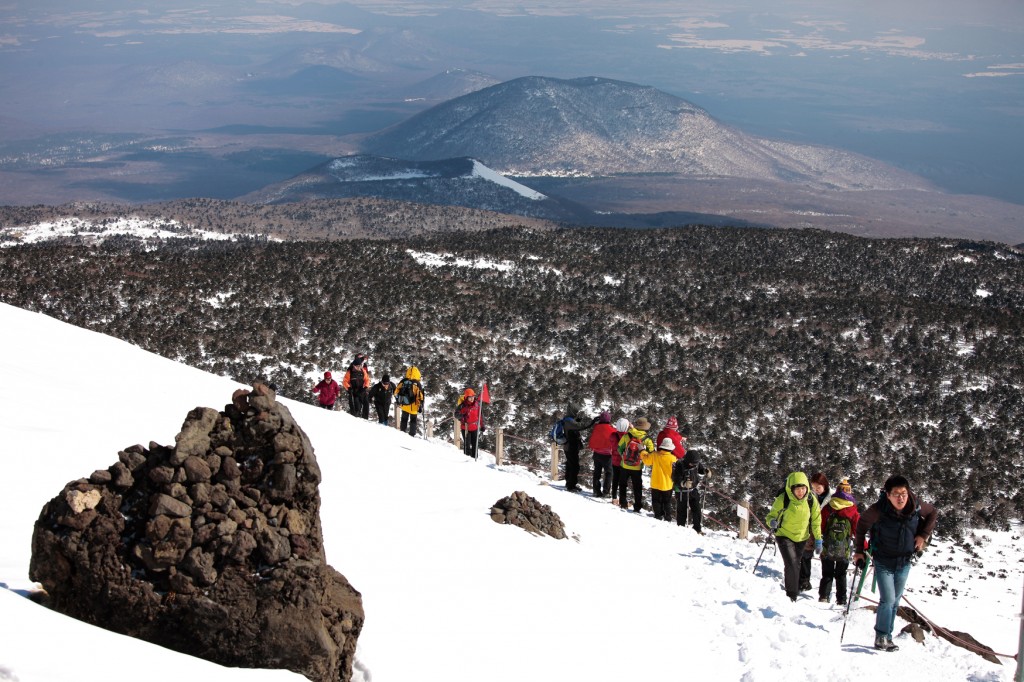 It’s best to start exploring Hallasan via the relatively easy 3.7 km Yeongsil Trail on the southwestern side of the island. After a simple walk through groves of pine trees and meandering streams, the trail quickly steepens and opens up to reveal a spectacular valley. To the west Yeongsilgiam, an imposing wall of rock, rises from the valley floor, its rugged cliffs lined with a series of jagged stones, “The 500 Disciples of Buddha,” which resemble the spine of a dinosaur. According to legend, the 500 disciples are stretching high towards the sky after having reached some form of nirvana.

Near the top of the steep incline, hikers encounter an unusual scene. A graveyard of twisted fir trees stand solemnly near the trail, their beautifully gnarled trunks and craggy branches shrouded in early morning mist. The trees, known as Abies koreana or, in Korean, gusang namu, are found only in Korea. According to officials at the Jeju World Natural Heritage Center, they’ve been slowly dying off since the 1980s and were listed as an endangered species in 2012 by the International Union for Conservation of Nature. 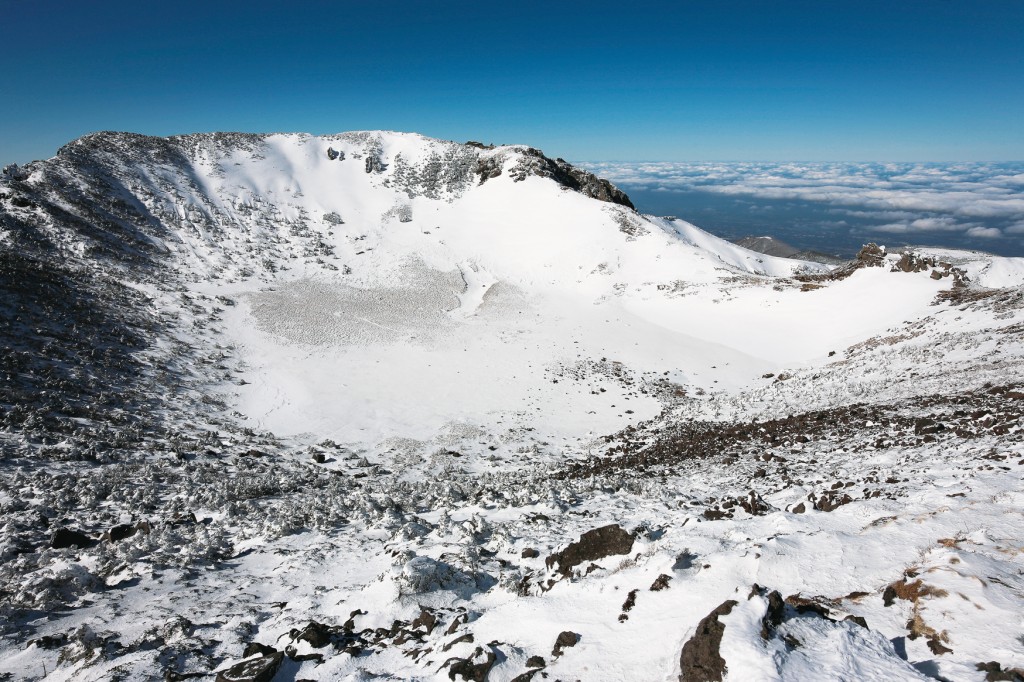 It’s unclear why they’re dying, but scientists believe that a combination of fungal pathogens, competition from invasive species, drought, increasingly strong typhoons in the summer months and a lower accumulation of snow in the winter may have played a part. The Korea Forest Service, the Korean Ministry of Environment and the Cultural Heritage Administration have banded together to research ways to save the trees.

No trip to Jeju is complete without a hike to the summit of Mt. Hallasan. Before doing so, it’s worth paying a visit to Sancheondan (“Mountain-Heaven Altar”), a little-known shrine on the north-eastern side of the mountain. For nearly a thousand years, locals paid their respects to Mt. Hallasan in annual ceremonies at a shrine on the volcano’s peak. By the 15th century, however, several of the worshippers froze to death, prompting the local authorities to have the shrine’s stone altars moved to its current location. It’s a wonderful spot in winter as early morning fog moves across the frost-covered altars, their rough stone etched with ancient messages of respect for Mt. Hallasan. 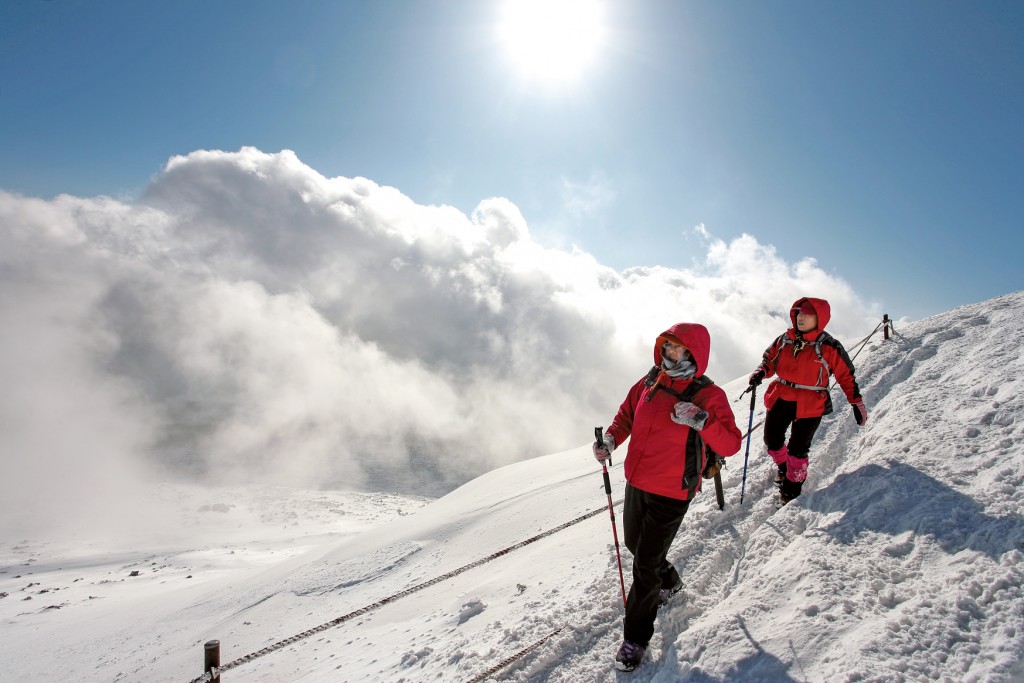 Just a few minutes away lies the Seongpanak Trail. At 9.6 km it is Hallasan’s longest route and currently the only one that reaches the peak. The trail starts with a fairly easy walk across about 4 km of volcanic rock, followed by about two hours of steep climbing that leaves hikers standing at the Jindallaebat Shelter. Located just 2.5 km from the top, it’s a great place to rest and enjoy a steaming cup of noodles or hot chocolate while taking in the majestic snowscapes, the ambiance of which is unparalleled anywhere else on the island. All around you are trees covered in massive piles of snow, with glistening icicles hanging from the branches above them like nature’s chandeliers.

The main attraction of the Seongpanak Trail is, of course, the view from the top. The snow-filled Baengnokdam Crater is one of the most awe-inspiring sights you’ll ever see in Korea. The holiest site on the island, it is here that local legend says 100 spirits once rode around the crater on white deer. For centuries after, locals held a deep sense of respect for the mountain. 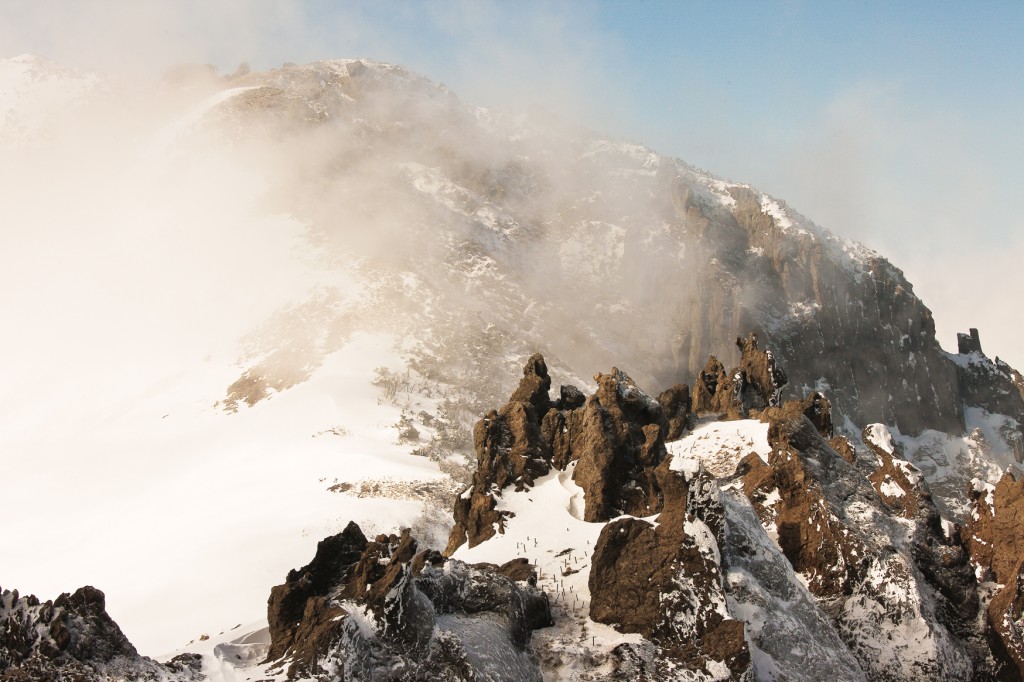 It is inspiring to ponder the spirit of islanders of old who so long ago braved the extreme winter weather in order to pray to the mountain god and the heavenly spirits. At dawn, thick fog rises from Baengnokdam’s colossal bowl as the sun creeps up over the horizon and paints the jagged pillars of rock and the deep valleys and ridges that surround either side of the crater in golden light, completing the almost otherworldly scene. It’s a stunning, almost divine view.

– Layers are important because the temperature can vary quite a bit on the trail.
– One or two fleece sweaters.
– Light jacket for lower portions of the trail.
– Warmer down-filled jacket for the summit.
– A balaclava is useful for higher portions.
– GORE-TEX boots that cover ankles (to prevent ankle sprains when descending the mountain) and gaiters as the snow can be several inches deep on the trail and socks can get soaked quickly.
– A good pair of crampons
– Light gloves or liners for the lower portion of the trail and insulated “ski” gloves for the upper portions.

EAT> Jejudo is noted for its delightfully distinctive local cuisine. Favorites include abalone porridge, or jeonbokjuk; grilled tilefish, or okdom gui; and grilled pork from the island’s famous black haired pigs, or heukdwaeji.
On the trail, you can purchase instant noodles and a warm beverage from the shop at the Jindallaebat Shelter.

STAY> The Sanbangsan Hot Springs Spa features both indoor and outdoor pools. The indoor pools are separated by gender. But men, women and children can all enjoy the outdoor pools together. Swimsuits must be worn in the outdoor pools and everyone is required to shower before entering the water. To get to the spa from Jeju City, take the bus to Jungmun, then take a taxi down the 1132 highway toward Sanbangsan. The spa is 500 m southwest of the Doksu Intersection.

GO> Jeju Air offers several flights daily from 7 AM to 8 PM.
The Seongpanak Trail can be reached by taking the 516 road south from Jeju City for about 20 minutes by bus or car. A well-marked sign and parking lot are on the right side of the road.
It takes between 3 and 5 hours to reach the peak, so plan accordingly. If you hope to reach the top in time for sunrise, a 1 AM to 2 AM start time is recommended. Otherwise a start time of between 5 and 6 AM is sufficient.
To get to the Yeongsil Trail, take bus No. 100 from Jeju International Airport to Jeju Intercity Bus Terminal, and from Jeju Terminal, take bus No. 1100 to Yeongsil.