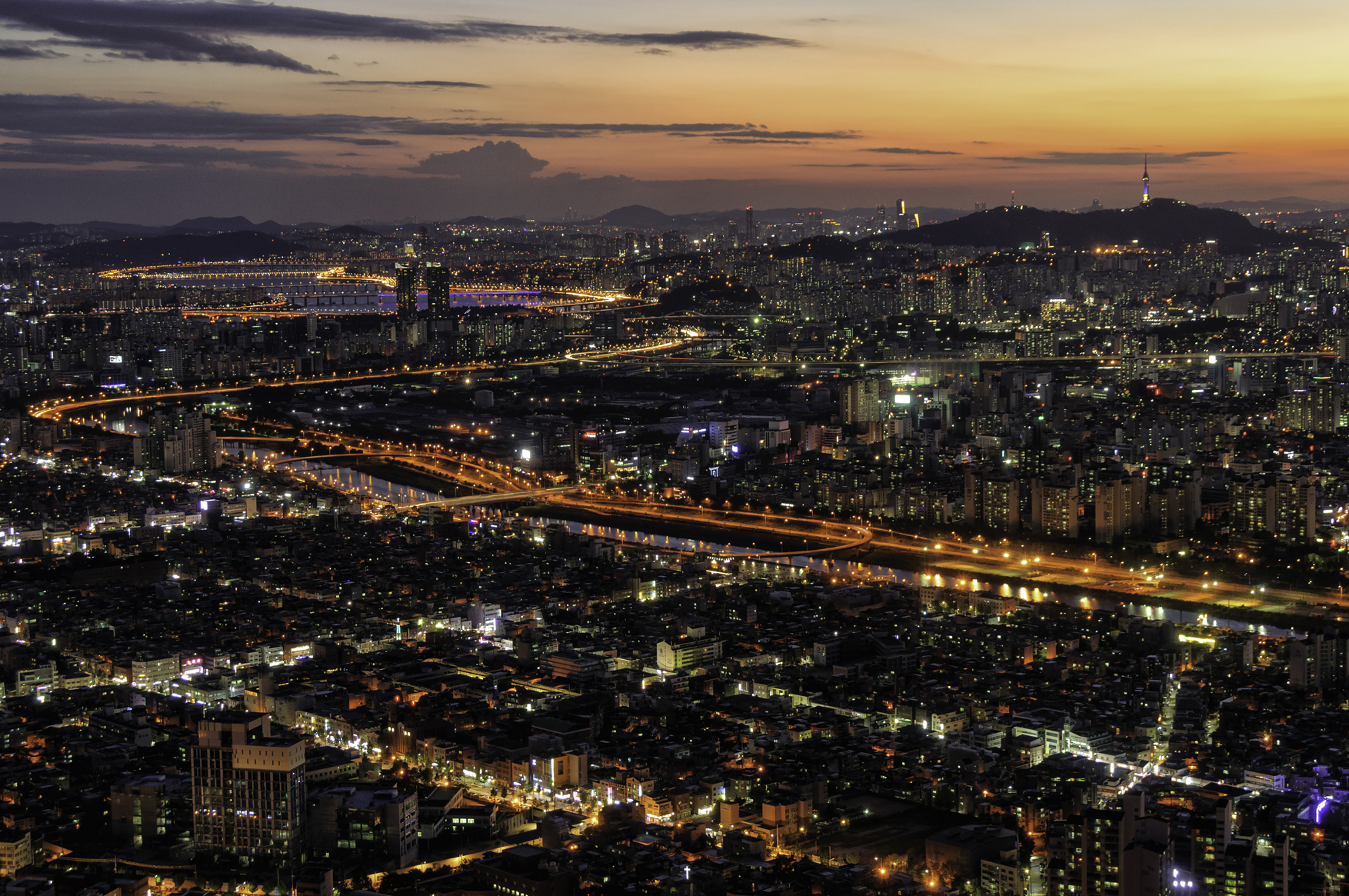 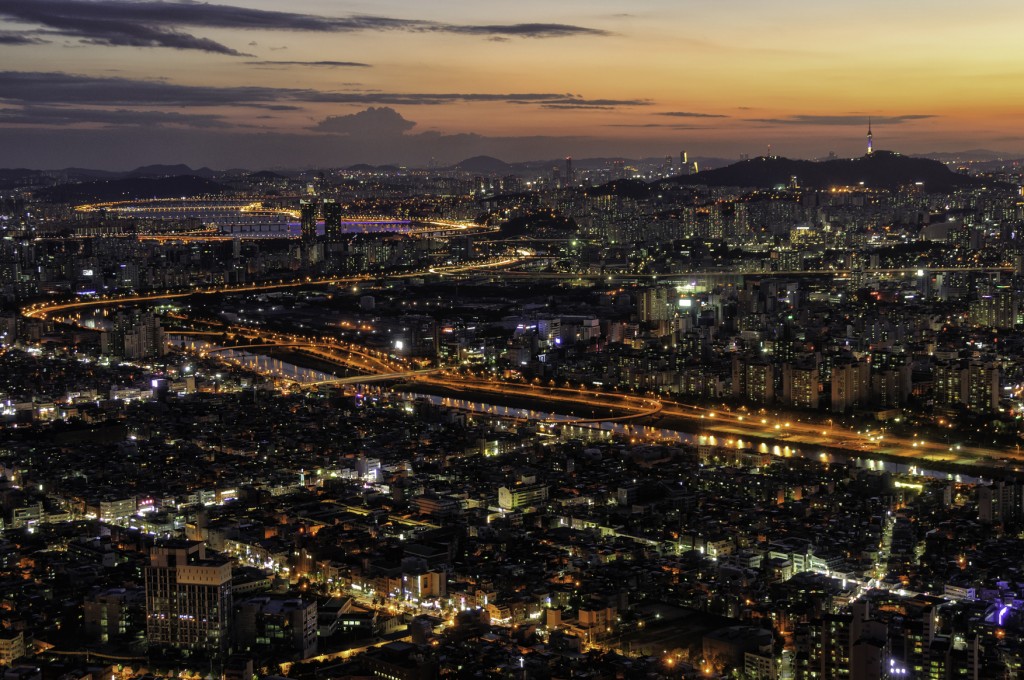 Relatively unknown to tourists, the Gwangnaru neighborhood and the mountains that make up the eastern boundary of Seoul reward the intrepid traveler with a rich history, scenic splendor, stylish hotels and the view up to the heavens you never imagined seeing in Seoul. On New Year’s Day, its peaks offer the earliest sunrises in the city, making it a worthy destination for wellwishers, hikers and the sentimental. But there is another scenery that’s not to be missed in Gwangnaru: the Seoul Metropolitan Observatory. The site is one of the few places within the city limits where budding Carl Sagans and curious grownups alike can turn their eyes – ably assisted by high-powered telescopes – to the stars.

Where the boats to Gwangju go

It’s hard to believe now, but not so long ago – little more than half a century ago, in fact – Seoul was a port city, and the Hangang River was dotted with numerous piers and ferry points, or naru. Gwangnaru, located on what was a sandy bend in the river, was so named because it was from here that ferries to nearby Gwangju, Gyeonggi-do, would depart. It was also the primary unloading spot for boats bringing timber and grain from the province of Gangwon-do; accordingly, its markets thrived in the days of the Joseon Dynasty (1392-1910). Up until the 1960s, the south side of the bend was lined by a wide, sandy beach that was a popular leisure spot for Seoulites. 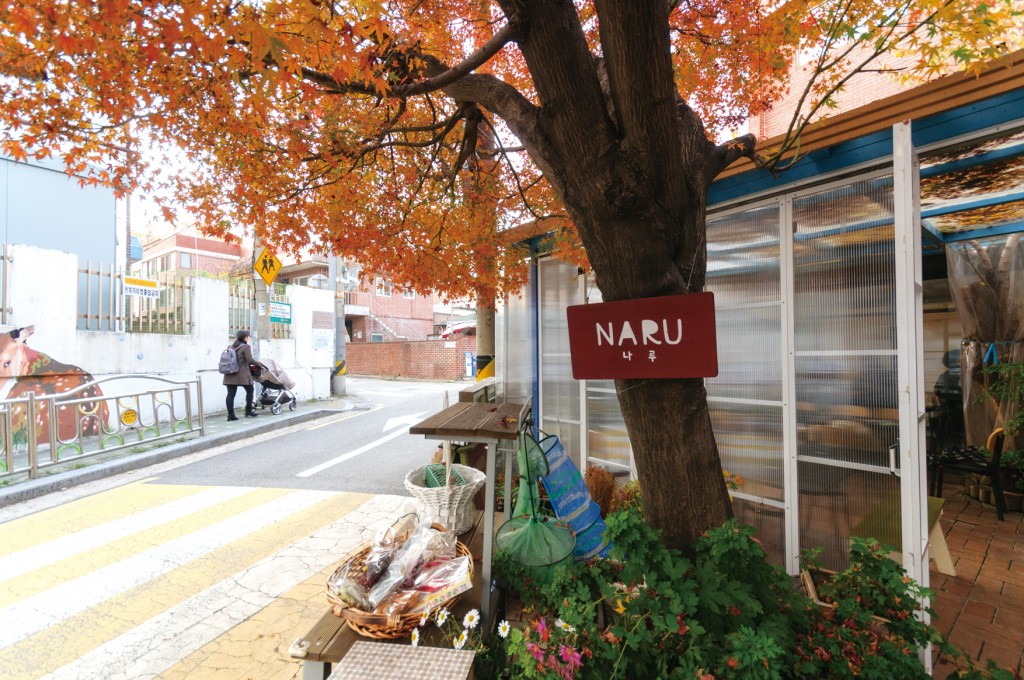 The development of road and rail traffic made the riverine boat trade obsolete, and dam and embankment construction along the Hangang River in the 1960s deepened and widened the waterway, submerging the beach. Today, the neighborhood north of the river is mostly quiet and residential, although not without its charms. A short walk from Exit 1 of Gwangnaru Station (Line 5) brings you to Gwangjang Middle School, where you’ll find an alleyway lined by wall murals depicting the story of ancient Goguryeo Kingdom (37 BCE-668 CE), the history of which is intimately tied with nearby Mt. Achasan. Several apartment complexes have likewise been adorned.

Hidden in the alleyways beneath the apartments are plenty of cozy independent cafés. A local favorite is the charming Café Naru, near Gwangjang Middle School, where you can enjoy a well-crafted espresso-based beverage in quaint surroundings for a reasonable price. The café is attached to a home that also serves as a bed and breakfast.

On the Goguryeo Trail

Walk past Gwangjang Middle School and Gwangjang Elementary School and you’ll come to a three-way intersection. Turn right and keep walking – up! – until you get to the Achasan Ecological Park and, a little above that, Mt. Achasan itself.

At 287 m, Mt. Achasan isn’t Seoul’s highest peak, or even its most dramatic, but what it does provide is stunning views both to the west, over the city of Seoul, and to the east, over the Hangang River as its twists and turns through the mountains of Gyeonggi-do. This also makes it a rare peak where you can enjoy both dramatic sunrises and sunsets. Due to its elevated position on the eastern limit of Seoul, the peak gets the earliest sunrises in the city, making it a popular destination on the morning of Jan. 1, when the local authorities host a festival on the mountain to celebrate the new year. The favorite place to see the sunrise is not the peak itself, but so-called “Sunrise Plaza,” a scenic overlook that’s about a 30-minute hike from the park entrance. Mt. Yongmasan, which is attached to Mt. Achasan by a ridge, is a great place to see Seoul at night.

Occupying such notable heights overlooking the Hangang River, Mt. Achasan has been a strategic prize since the Three Kingdoms Period (57 BCE-668 CE), when the rival kingdoms of Goguryeo, Baekje and Silla waged bloody battles for control of the peak and, by extension, that Hangang River valley. The northern-based Goguryeo Kingdom, which seized the mountain from Baekje in a 475 battle built a series of stone bastions on specific overlooks along the ridgeline. Five of these bastions survive today, including one that has been restored and opened to the public, complete with wooden walking paths. In fact, the mountain’s Goguryeo-related historical sites are now included in the Goguryeo History Trail, a 7.8 km walking course that links Mt. Achasan with the Mongchontoseong Fortress area south of the river via the Gwangjin Bridge. 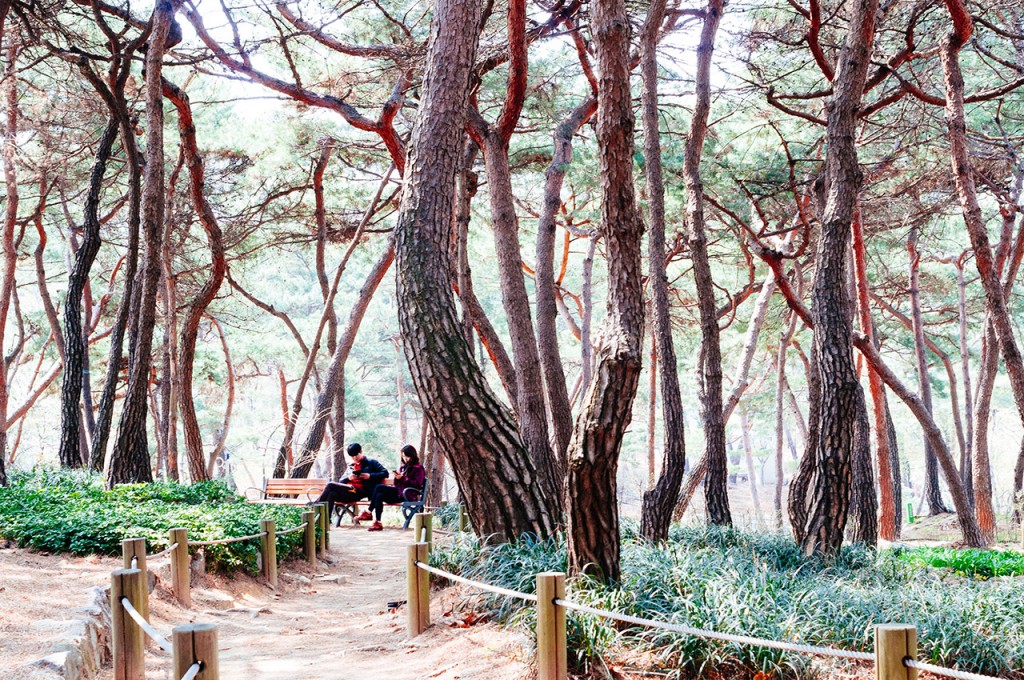 Follow the Goguryeo History Trail from the top of Mt. Achasan down past the small Buddhist hermitage of Daesongam, Achasan Fortress (another historic fortification) and Achasan Ecological Park and you’ll come to Walkerhill Road, a tree-lined scenic roadway. The road is especially beautiful in the spring, when the cherry blossoms that flank the street come alive, turning the street into a giant pink tunnel. It is considered an especially good spot for “healing,” or reconnecting with nature in order to recover from the spiritual bumps and bruises of modern city life.

Keep following the road until you reach the Sheraton Grande Walkerhill, one of Seoul’s most historic luxury hotels. Founded in 1963 as a resort for American officers, the hotel is surrounded by beautiful woods and gardens and yields beautiful views of the Hangang River below. Of architectural note is its Pizza Hall, formerly the Hilltop Bar, a concrete pavilion shaped like a “W” (for Walker) completed in 1963 and designed by the late Kim Swoo-geun, one of Korea’s greatest modern architects. Not only does it offer wonderful views of the river but it is also a great place to enjoy a slice amid history.

Just next door to the Sheraton Grande Walkerhill is the W Seoul Walkerhill, the global design icon’s first property in Asia. As you’d expect at the W, design is the name of the game here – the WET pool is one of Korea’s most breathtaking, and its famous WooBar, with its seemingly ripped-from-the-set-of-“2001: A Space Odyssey” décor and inspiring views of the river and skyline, is one of the trendiest spots to have a drink in the city. 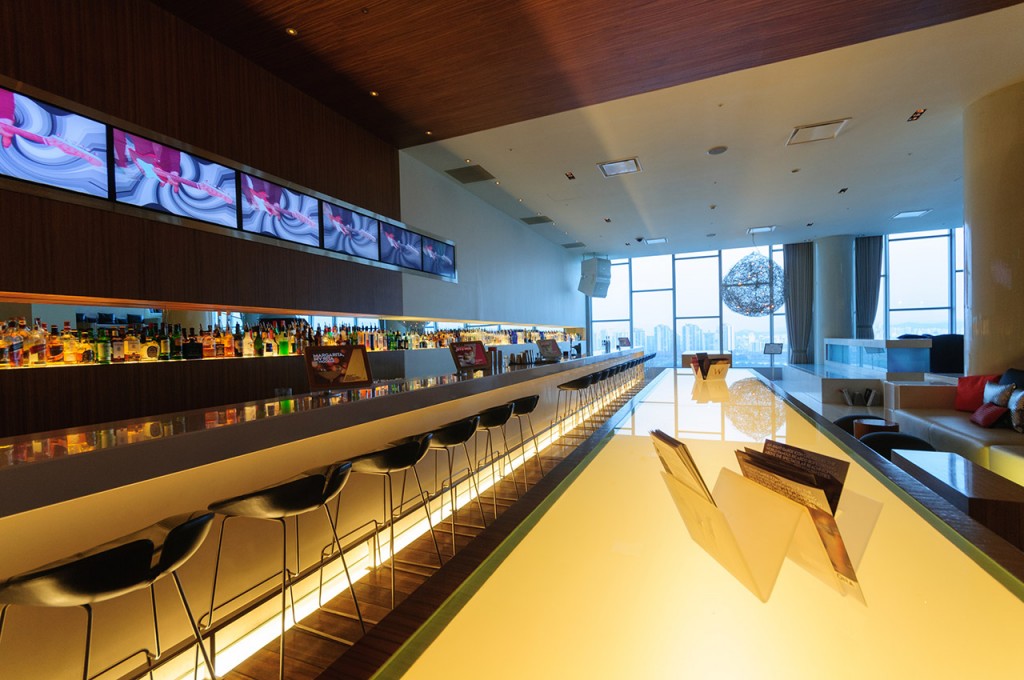 At night, head back to Gwangnaru Station and the nearby Seoul Gwangjin Youth Center to check out the Seoul Metropolitan Observatory, a must-visit for future astronomers, SF lovers and couples seeking something different. In fact, the complex includes both a 139-seat planetarium complete with a six-channel Digital Sky 2 projector, a domed observatory with a 600 m refractor telescope and an outdoor observatory with six smaller telescopes of varying length. To get the full experience, make a reservation at the website (www.astroseoul.or.kr, Korean only) for their constellation observing program. First, you will lay comfortably in the planetarium gazing at the dome screen and learn the legends and science behind the constellations you see in the winter sky. For the next hour you can make use of the equipment in the indoor and outdoor observatories under the guidance of a specialist. If the weather allows, you might even see nebulas many hundred light years away. 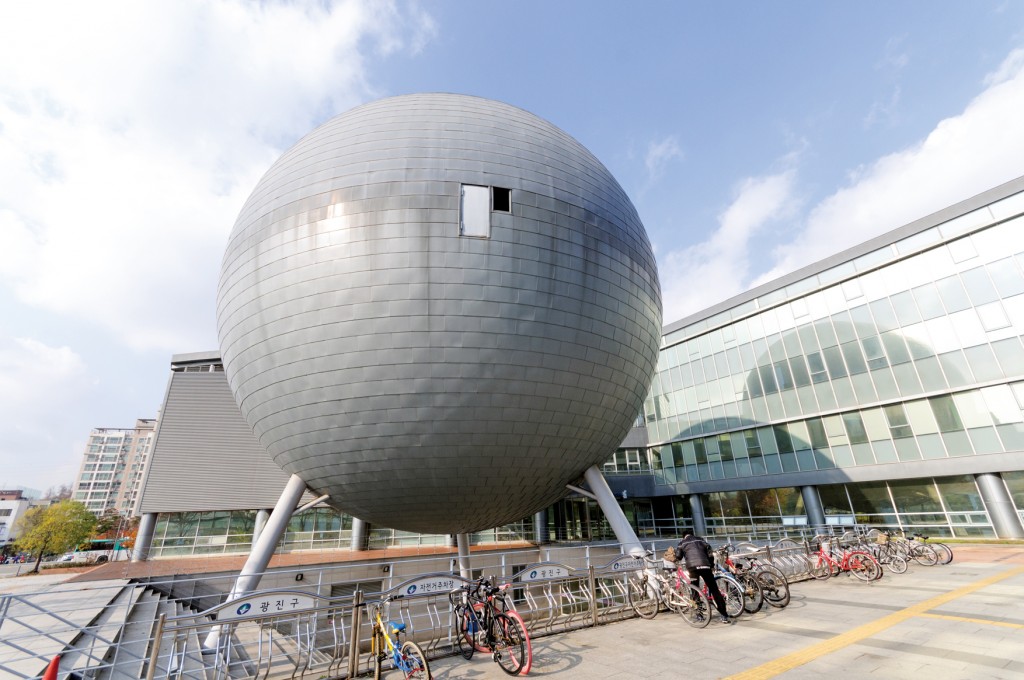 TIPs: Besides the Seoul Metropolitan Observatory, there are three other locations in the city with telescope programs: Yongsan-gu’s Donga Science Observatory, Nowon-gu’s Seoul Public Observatory and the observatory of  Seoul Science Park in Gwanak-gu.

For more information visit http://www.visitseoul.net, and to learn about

The Mountain of Gods