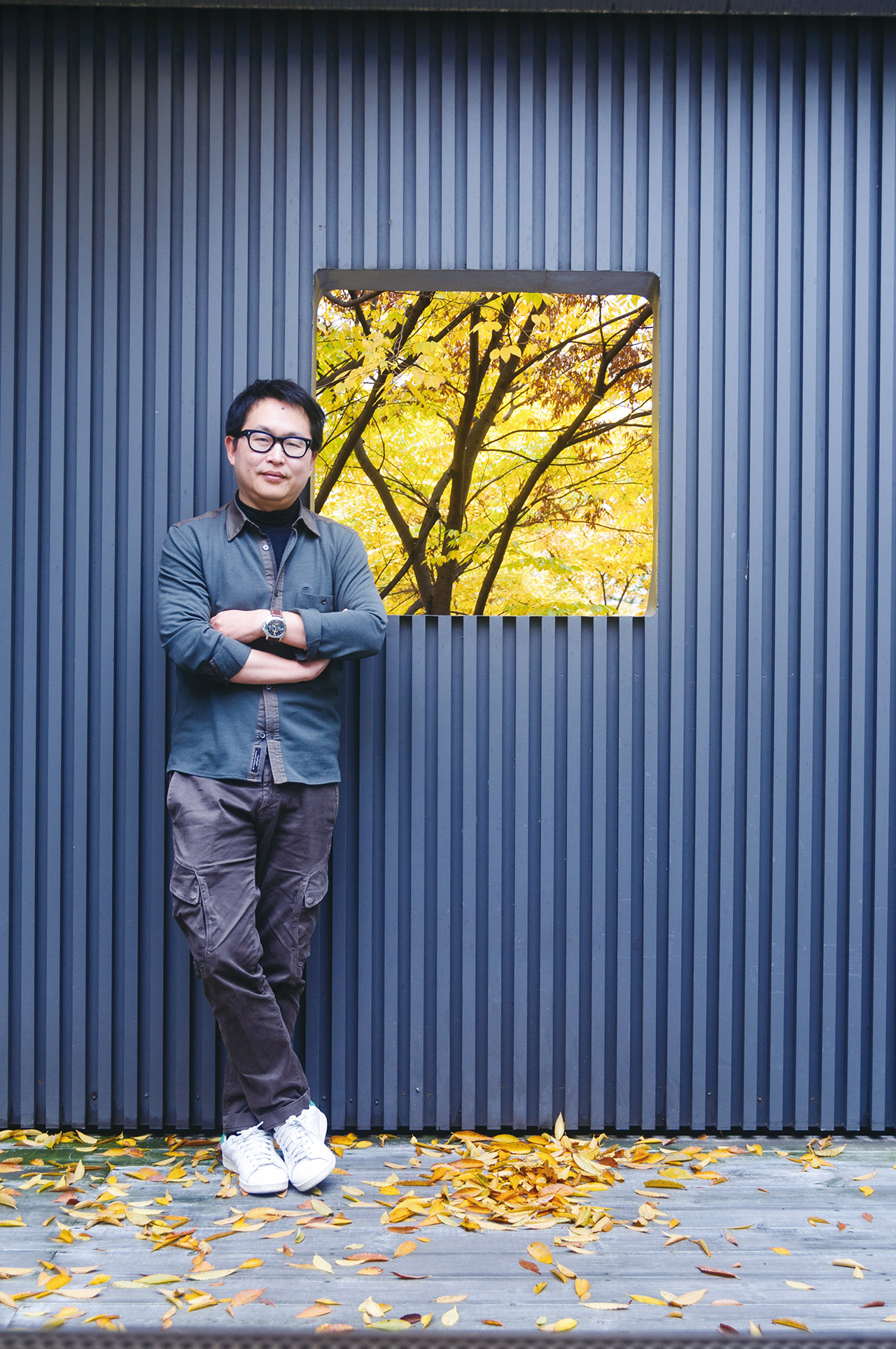 The_System Lab principle designer Kim Chanjoong sits in his office, a converted second-story storage space above a supermarket in the quiet Seoul suburb of Bundang. As you᾿d expect in any architectural office, there are foam models of various projects here and there, but there are other, more unusual things as well: organically shaped, polycarbonate finishings from previous projects, for instance, and a tracked electric hoist on the ceiling. Kim points to the hoist. “You see that in auto body shops. We use it to move models around.”

Now in his 40s, Kim has earned himself a reputation as one of Korea᾿s boldest architects, a reputation cemented in 2006 when his innovative “The Last House,” a vascular vertical cemetery that integrates futuristic information technology and clean energy production facilities, was selected to represent Korea at the Venice Biennale. He’s the man behind some of the city’s most original designs, including the Gangnam Commercial Bulding – aka the Paul Smith flagship store – and the Gaudi-esque Hannam-dong HANDS Corporation Headquarters. The latter is easily recognizable to many a commuter because of its white, undulating facade and three-dimensional aspect – likened by World Architecture News to a piece of a optical art – that brings a bit of visual joy to one the city’s busiest but otherwise featureless roads.

An industrial designer in architect’s clothing

Educated at Korea University, the Swiss Federal Institute of Technology Zürich and Harvard University, Kim is a professor at Kyung Hee University and a published writer in some of the world’s most prestigious architectural journals. In spite of this, however, he admits he didn’t always want to be an architect; as a young man, his interests were more artistic. “I badly wanted to be not an architect but a product designer. But in Korea in order to get into product design you have to go to art school,” he explains. His father, who considered art school a fast track to a life of dissolution and poverty, would have none of it, and pushed him to go to engineering school instead.

Kim’s interest in product design, however, manifests itself in the way he works. “Most of my works are based on the architectural field, but the way I approach a project is quite different from the traditional architectural approach,” he says. For instance, he frequently applies technologies and techniques particular to the product design field, pointing to a polycarbonate stand in the corner of the office. “That’s part of my building. It was for collecting water,” he says. “In order to make that kind of shape we had to use the vacuum forming methodology, which is quite common in product design, but very rare in architecture.” 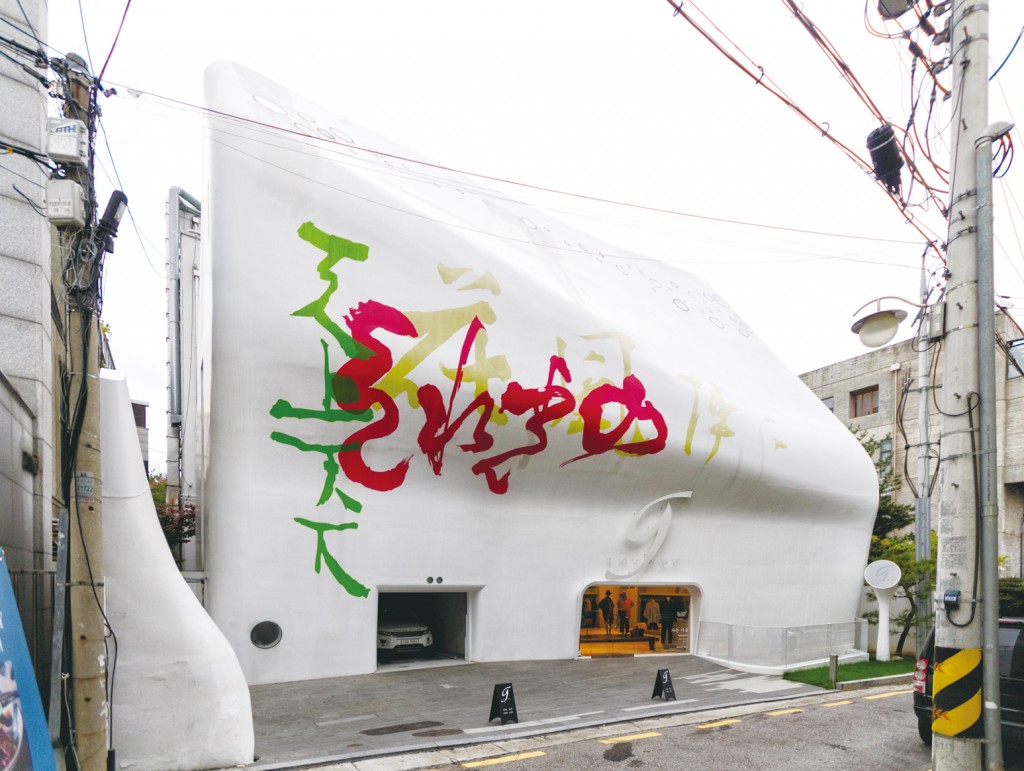 Architecture as a system

The name of Kim’s studio, The_System Lab, reflects Kim’s philosophy that architecture is, at its most fundamental, a system. “In my opinion, every project has its own problem or issue based on the cost, the period or the user’s tastes,” he says. “I thought the really important thing in designing something, especially in architecture, is to understand all those sorts of problems first.”

To see this problem-solving and system-building process in action, look no further than one of his most iconic structures, the Gangnam Commercial Bulding, a Cheongdam-dong boutique originally built for British suit designer Paul Smith in 2011. A curvaceous, seemingly inflated concrete shell, the building is alternately liked to a camera bag, a molar and, most commonly, a marshmallow.

The unusual facade isn’t art for art’s sake, though – it’s a solution to the project’s spacial, regulatory and financial limitations. “Paul Smith himself wanted a huge building, but the site itself is very small,” says Kim. “We had no choice but to take a different kind of approach to put everything there.” To comply with strict local building codes limiting built height while still maximizing volume, the midsection of the structure was inflated. To create the intricate concrete shell while keeping costs low, Kim used a Styrofoam mold – a worldwide first. “It’s a very practical thing, but it also looks artistic.”

Kim’s problem-solving technique can also be seen in the Hannam-dong HANDS Corporation Headquarters, his favorite stucture and one he likens to a “Smurf’s house.” Like the Paul Smith flagship shop, the sophisticated, undulating facade required some outside-the-box thinking – ultimately, techniques taken from shipbuilding were used to cast and erect the exterior. The location, too, presented the architect with many issues to resolve. “In order to build a new building in front of the wide road, we had to get through so many committees to regulate the design itself,” he says, with skeptical architectural committee members expressing skepticism that he could build such an unusual structure at all. But build it he did, and the resulting design has customers wanting more. “After this, most of my clients really want to have buildings with even more impact than this one,” he says. “It’s really quite stressful.”

Valuing the past and future

Seoul’s profile in the international architecture scene is rising, and Seoulites are becoming more sophisticated in their views of the urban environment. No longer do people wish to raze the old to erect huge, shiny but ultimately soulless complexes. “We just figured out that people, especially foreigners, don’t want to see really new buildings because that sort of thing is everywhere in the world,” he says. “They want to feel what Seoul is, what its history is, what the originality is.”

People now want to see layers of time in the city’s architecture, he says. He points out, “Just 10 years ago, the north part of Seoul was quite empty on a Friday or Saturday, but these days, in order to get into the main area of the north part of Seoul, it’s totally crowded with people enjoying the old textures and visuals.”

It’s a trend that has impacted his work as well. “Nowadays, every client who purchases land asks me to incorporate the old building into the new design,” he says. “It’s big progress, actually.”

As Kim matures, he’s also gaining a greater appreciation of his impact on the future as well. “In my 30s, I was very determined to differentiate myself from other people,” he says. “In my 40s, I started thinking about the long term.” A building is not just a building, he says – the architect will pass away one day, but his work will stand on, quite possibly for a long time. “Architecture is a very risky thing,” he says. “If we get the idea wrong, it will have a bad influence on the surroundings for a long time.”