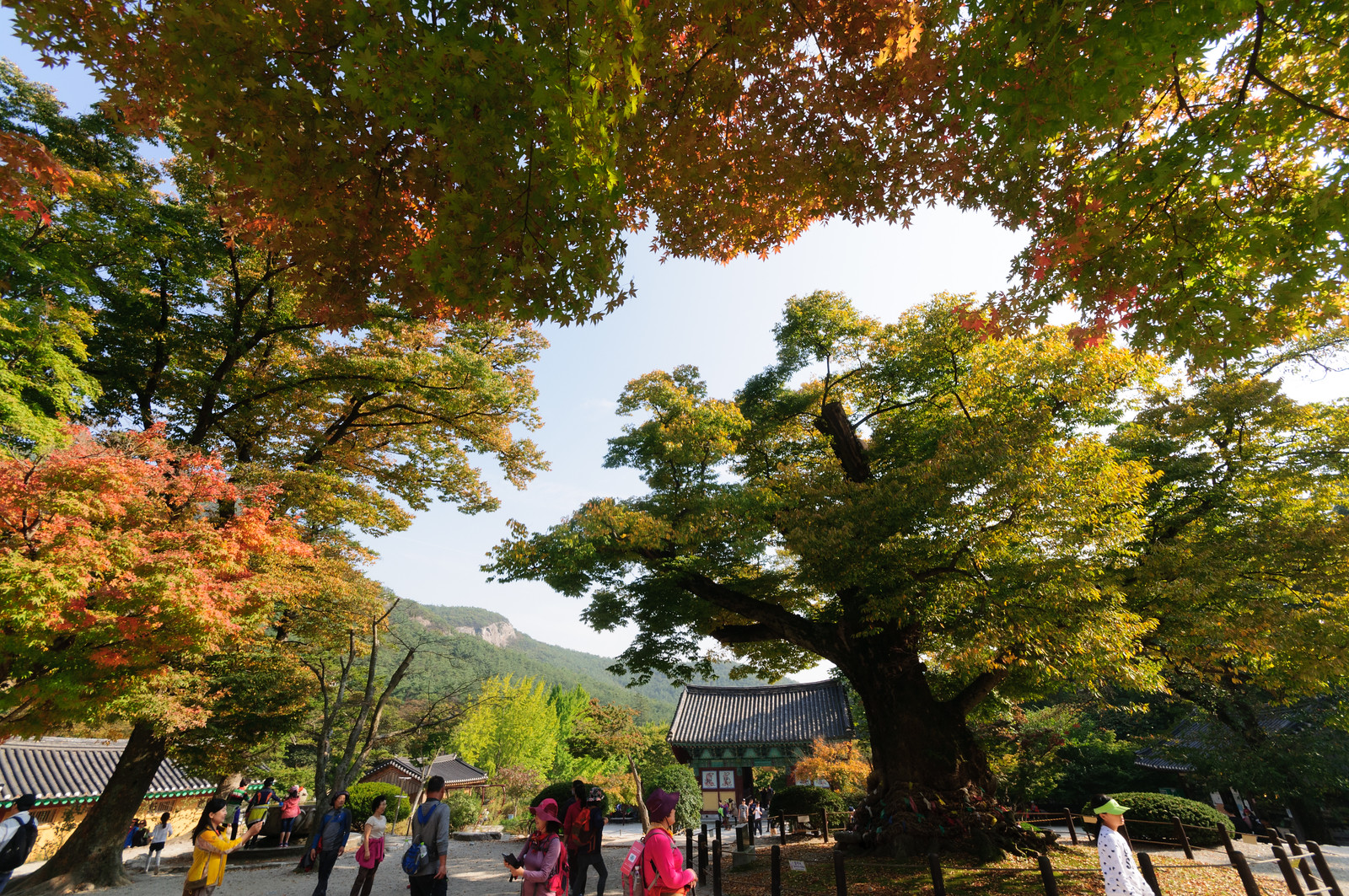 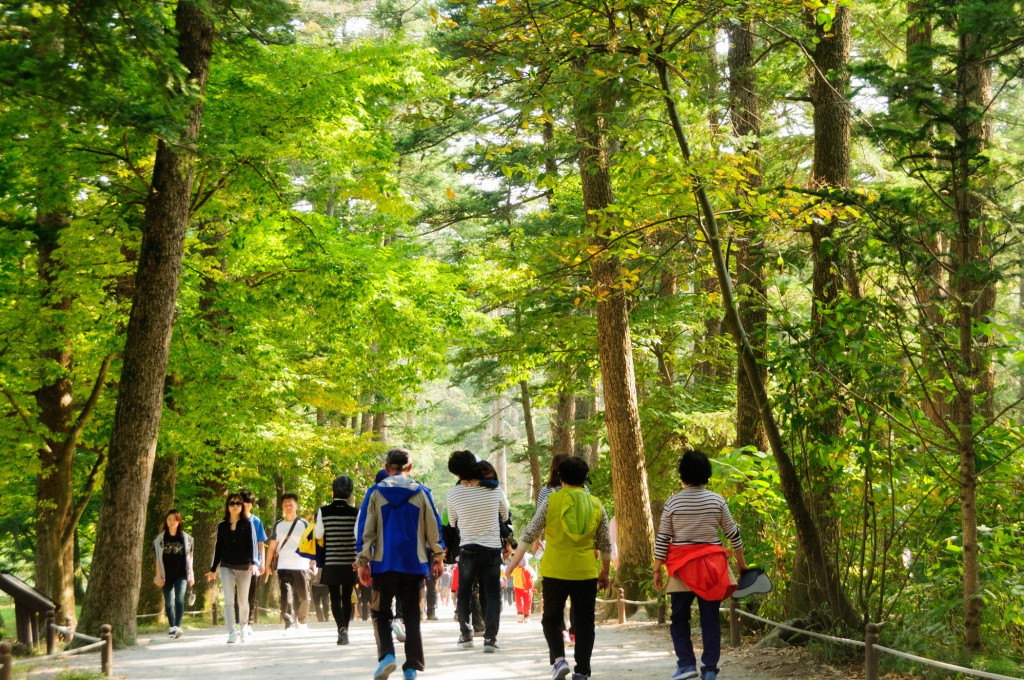 Byeonsanbando National Park is where nature and culture meet

Byeonsanbando National Park is a little piece of paradise nestled into a peninsula jutting into the Yellow Sea from southwestern Korea. Granite peaks, age-old Buddhist temples, deep and fragrant forests, romantic sunsets – it’s everything you came to Korea for, all in one, relatively easy-to-explore spot. This is a place you should enjoy slowly, though, with plenty of time to absorb its endless charms. 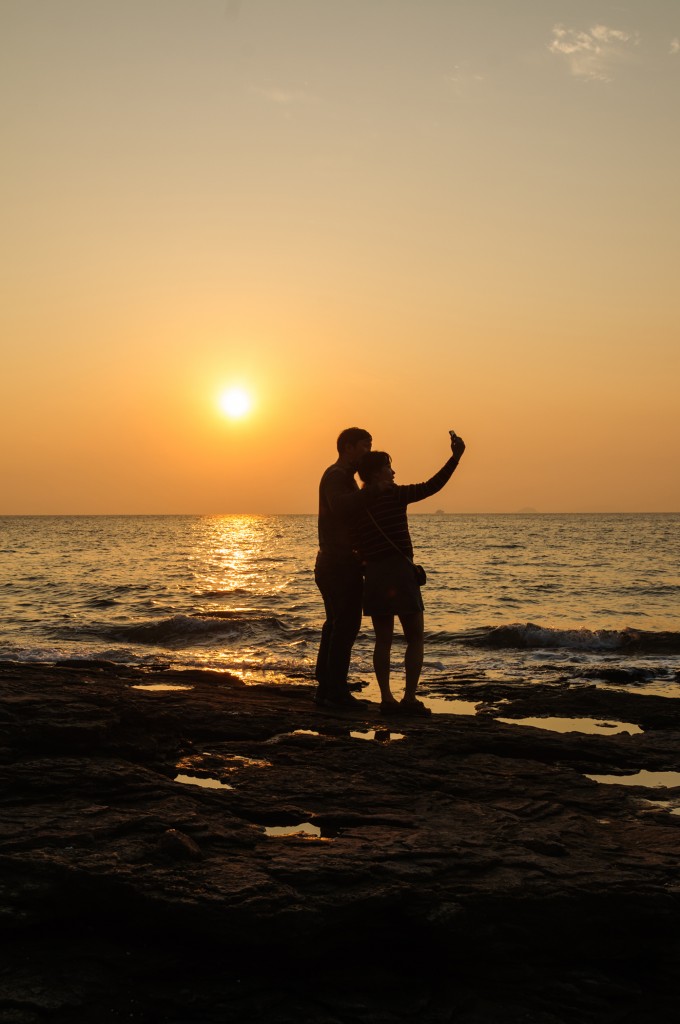 The national park encompasses nearly 155 square kilometers of the Byeonsan Peninsula, a rugged headland near the rural town of Buan in the province of Jeollabuk-do. Broadly speaking, the park is divided into two sections: Oebyeonsan, or outer Byeonsan, which consists of the dramatic coastline, and Naebyeonsan, or inner Byeonsan, centered on the peninsula’s mountainous interior. To fully appreciate both, you’d have to set aside a separate day to explore each.

Due to its beautiful sunsets – the latest sunsets in Korea, in fact – and its accessibility, Oebyeonsan is the more popular section of the park. That popularity is not unearned. Unlike most of Korea’s largely flat West Sea coastline, where the land often merges gently with the sea in giant mud flats, the Byeonsan Peninsula greets the ocean in a much more dramatic fashion, its weathered cliffs shining bright and red in the light of the setting sun.

Oebyeonsan’s most picturesque cliffs can be found around the port village of Gyeokpo. The Chaeseokgang and Jeokbyeokgang cliffs, named for famous places of Chinese lore, are highly stratified from the pounding of the sea. The Chaeseokgang, in particular, has a series of caves that have been drilled into the layered rock by the crashing waves over the centuries. The cliffs – and the rocks below them – are a very popular spot from which to take in the setting sun, particularly with someone you love. There are some coffee shops and raw fish joints near the cliffs, too. 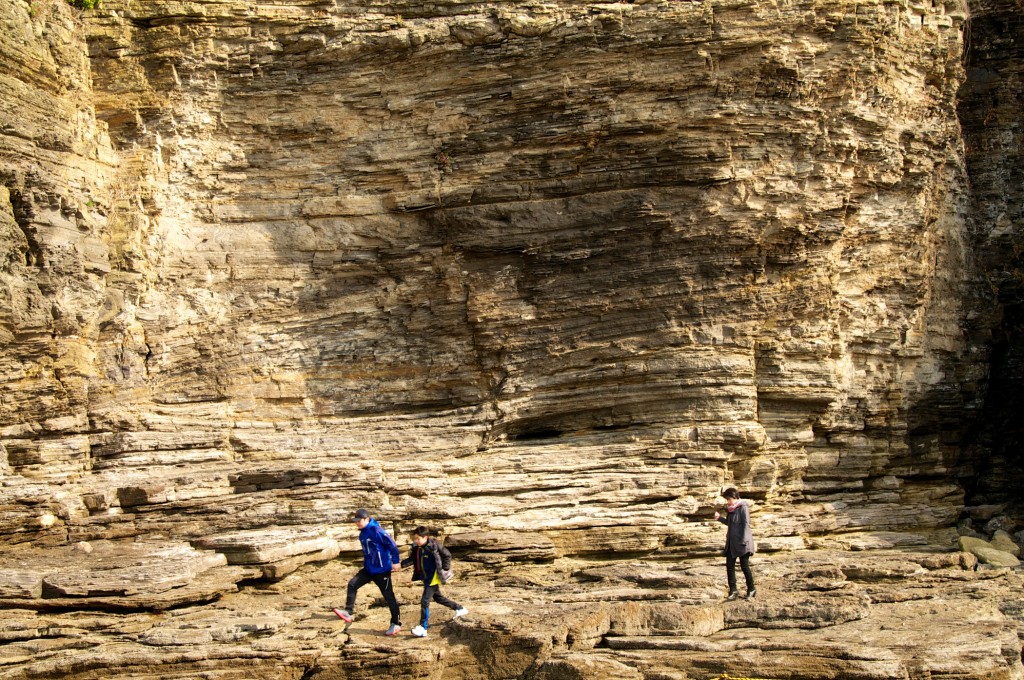 Serious photographers, however, should head to the nearby Sangnok Beach, where there’s a small island with gnarled pine trees, the silhouettes of which make for a lovely sunset shot.

Nestled along the southern coast of the peninsula is another point of interest, the fishing port of Gomsohang, a ramshackle sort of place famous known for its excellent salted seafood products. It is also home to historic salt farms where salt is extracted from pools of seawater by the light of the sun.

A peaceful cup of tea

Naebyeonsan’s peaks are not especially imposing, the highest being just 509 meters. But what the landscape lacks in altitude, it makes up for in rugged beauty.

The most commonly taken trail through the Naebyeonsan district begins at the Naebyeonsan Ticket Booth and follows a very scenic valley to the Jikso Waterfall, a 30-meter cascade that is one of the park’s most picturesque spots. From the waterfall, the path follows the ridgeline to Gwaneumbong Peak, an overlook with panoramic views of Gomsohang Port.

From Gwaneumbong, most hikers follow the trail down to Naesosa, the park’s biggest Buddhist monastery and one of the most beautiful temples in Korea. Founded in 633, the temple is approached by way of a wooded trail lined by handsome firs. The precinct itself is beautifully landscaped with ancient trees – one of which has long been used as a site of shamanistic prayer – and positioned so as to offer inspiring views of the mountains that form its backdrop. The temple’s main hall, where the main Buddha image is kept, is a masterpiece of Joseon Dynasty architecture. Especially lovely are its doors, with intricately carved designs of lotus and chrysanthemum blossoms. 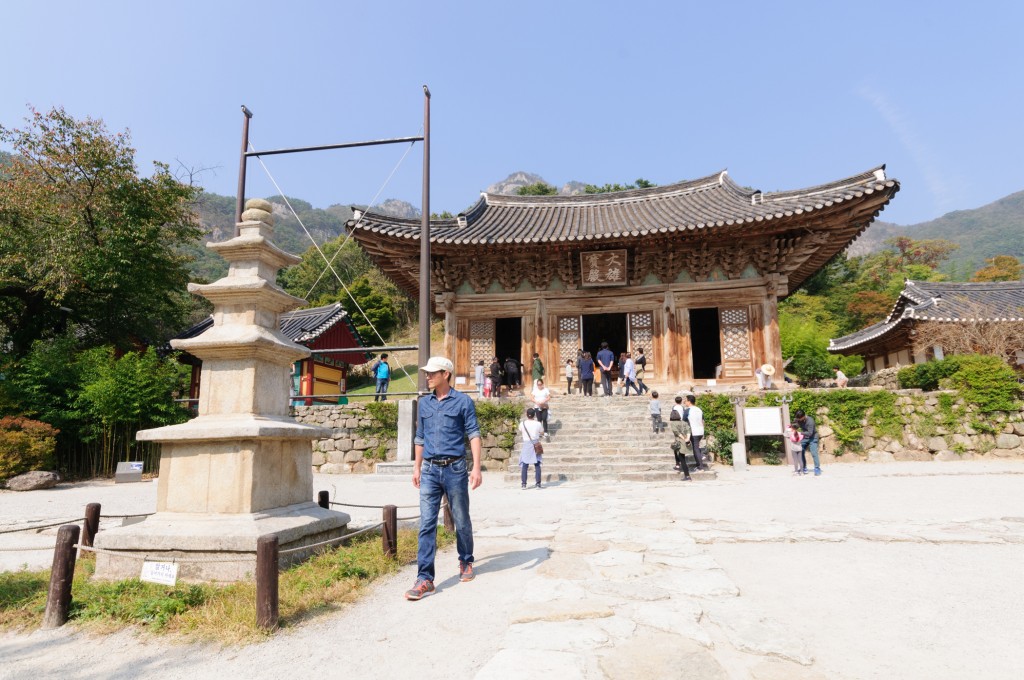 While you’re at Naesosa, stop by the temple’s teahouse, located to the side of the main courtyard. The indoor portion, with views of the temple courtyard, is pleasant enough, but the real gem is just out the back door, where there’s an old, Korean-style wooden deck overlooking an inner courtyard with a small garden. It’s a great place to relax for an hour and sip a cup of the temple’s delicious mulberry tea.

If you’re a temple enthusiast, another monastery to drop by is Gaeamsa, which, while smaller than Naesosa, is blissfully untouristed, relatively speaking. Its 17th-century main hall, which harmonizes beautifully with the granite peaks overlooking the temple, is largely original, its faded paint and wear lending character to the building. 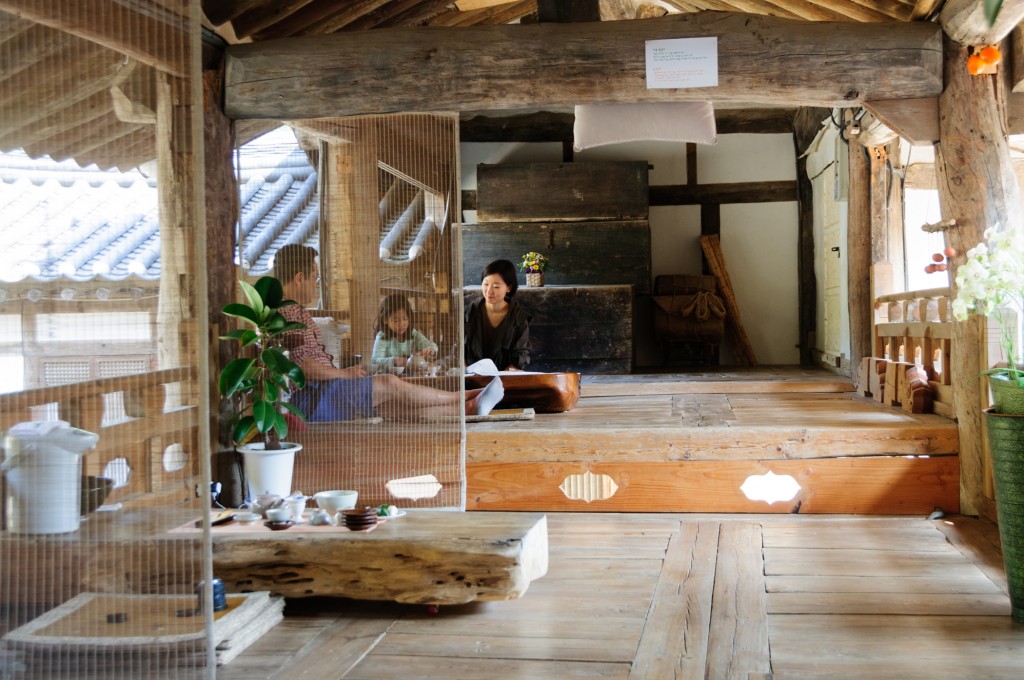 The Byeonsan Masilgil Trail is a hiking course that follows the entire coastline of the Byeonsan Peninsula, from Gaehwado in the north to Buan Ecological Park in the south. It’s divided into 14 sections, each of which takes between and hour to six hours to complete. The trails are marked by helpful signs that make it hard to get lost.

EAT> The area around the Chaeseokgang and Jeolbyeokgang cliffs is blessed with more than its fair share of raw fish restaurants, some with fine views of the setting sun.
The obligatory “tourist village” in front of Naesosa Temple, meanwhile, is a great place to score sanchae bibimbap, a bowl of rice into which seasoned mountain greens have been mixed. Many of the restaurants also serve ulgeum makgeolli, a variant of the favorite Korean rice wine made with turmeric. 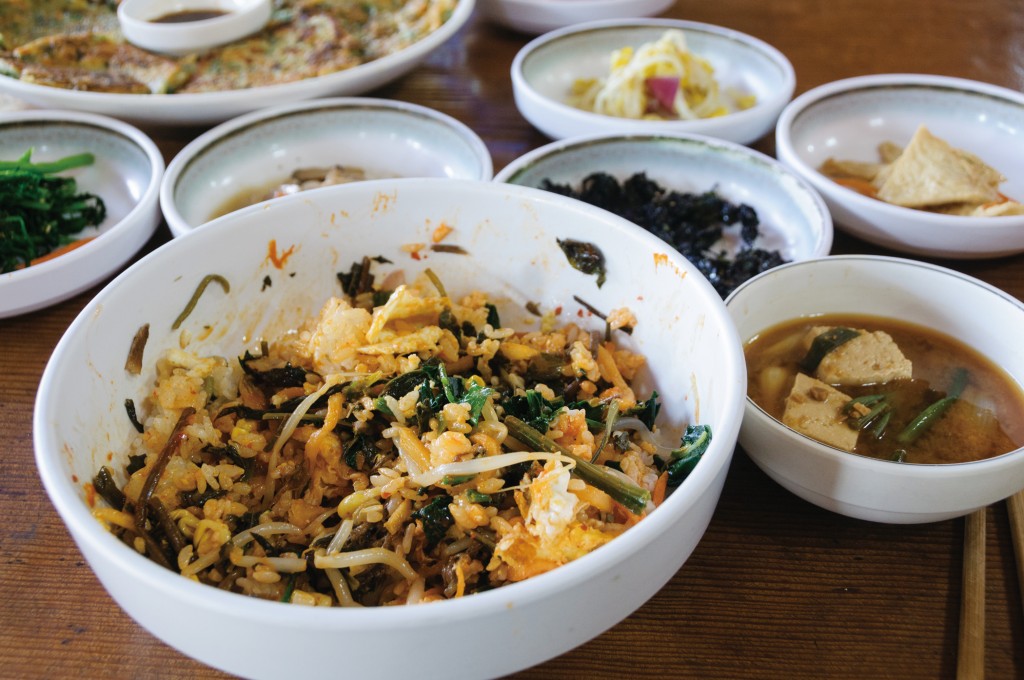 GO> Buses to Buan depart from Seoul‘s Central City Bus Terminal (travel time: about 3 hours). From Buan, local buses run to Naesosa Temple, Gyeokpo and other destinations in the park.