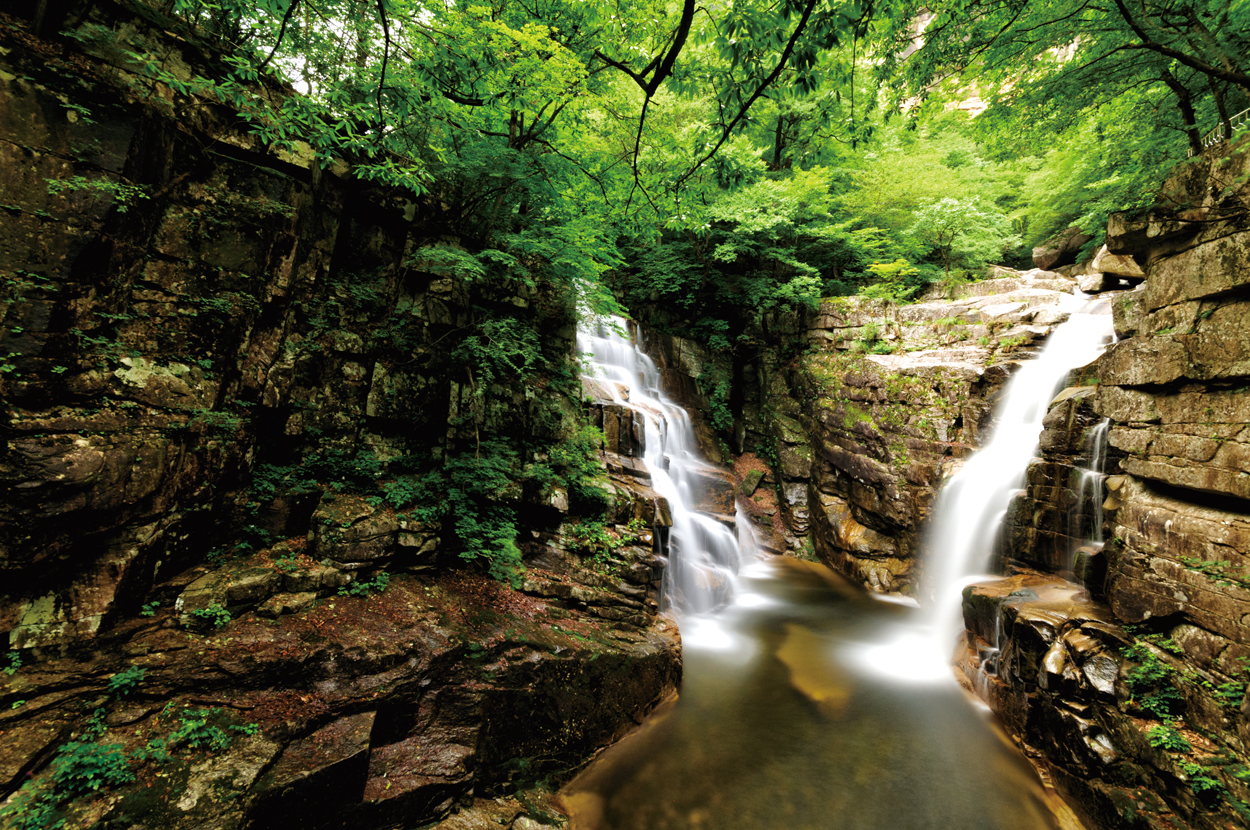 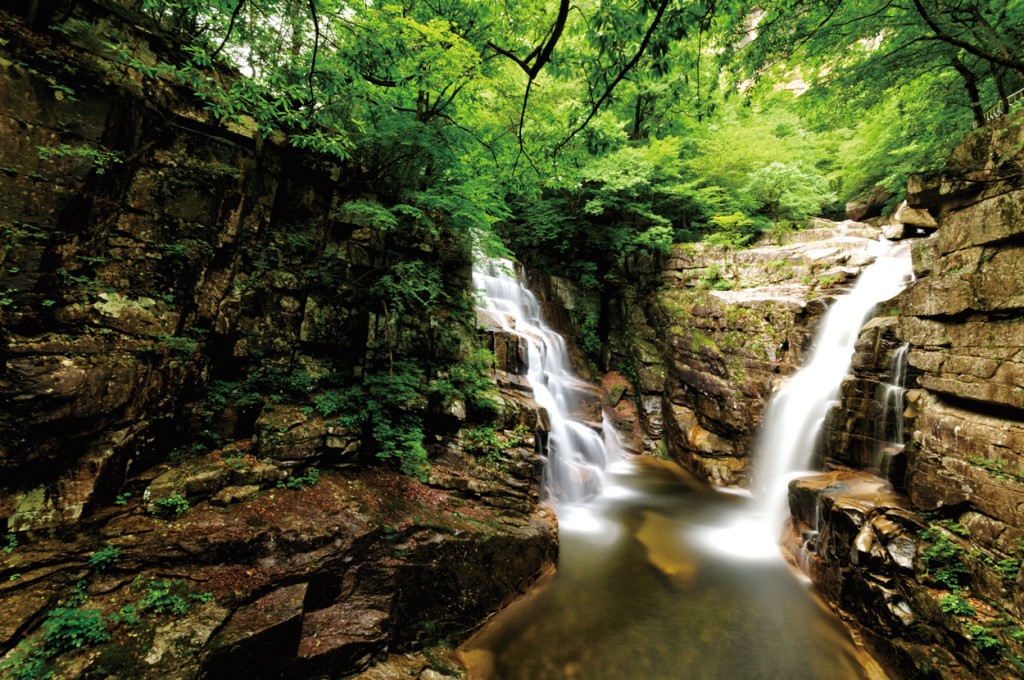 To many Koreans, summer offers a stark choice between the seaside and the mountains.

In the East Sea towns of Donghae and Samcheok, however, you can enjoy both. Spend the morning breathing in the salt air while the sea breeze musses your hair, and pass your afternoon in the shade of a deep mountain valley listening to the sounds of waterfalls and splashing your face with cool stream water. It’s the perfect summertime “healing” destination, a place where you can recover from the physical and mental wear and tear of daily life.

Unlike the low-lying ria coast of Korea’s western seaboard, the East Sea coast is a landscape of weather-beaten cliffs plunging into white-capped seas, backed by the high peaks of Korea’s mountain spine, the Taebaeksan Range. It’s a topography that lends itself to scenic drives – some of Korea’s most beautiful roads follow along the emerald waters of the East Sea, including a 4 km stretch of scenic parkway in northern Samcheok called the Saecheonnyeon Coastal Road, named by the Korean government one of the 100 most beautiful stretches of road in the country.

Windshield tourists aren’t the only ones who can appreciate the beauty of the coast. Korea’s national rail carrier, KORAIL, operates a sightseeing train, the appropriately named Seatrain (www.seatrain.co.kr), that plies its way along the coast from the famous seaside train station of Jeongdongjin in the north to Samcheok Station in the south, via Donghae. A round trip takes about three hours, but you’re welcome to get off along the way. Trains depart from Jeongdongjin at 10:30 AM and 2:10 PM, with an additional morning train at 7:10 AM on weekends. If you prefer your train travel human-powered, there’s also a 5.4 km scenic rail bike line (www.oceanrailbike.com) linking the rustic fishing villages of Gungchon and Yonghwa. The rail bike can easily be coupled with a visit to nearby Haesindang Park (see below), too.

If you’ve got the time, though, the best way to experience Donghae and Samcheok’s coastline is to walk it. The entire East Sea coast, from Busan in the south to Goseong in the north, is linked by an epic walking trail, the so-called Haeparang Trail (haeparang.org). The Donghae-Samcheok section of the trail is 105 km long and, in theory, could be walked in about 30 hours. One popular scenic spot along the trail is Chotdaebawi, or Candlestick Rock, a rock spire surrounded by other jagged rock formations cut from the coastal cliffs at Donghae’s Chuam Beach. The sunrises here are nothing short of breathtaking (see Tip: East Sea sunrises). 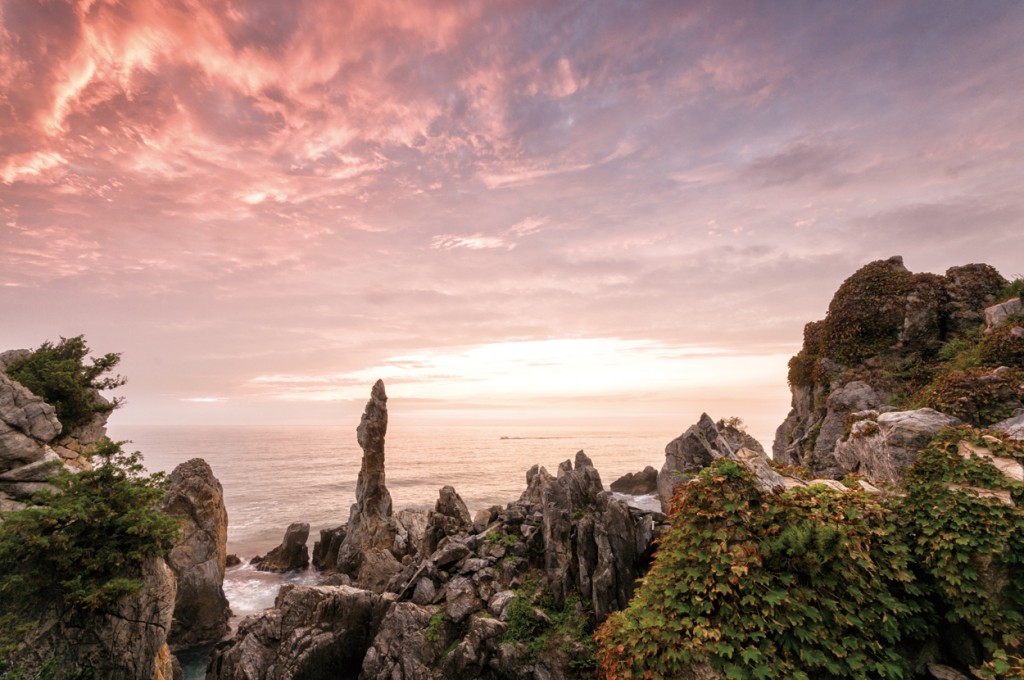 As you ride the bus from downtown Donghae to the entrance of Mureung Valley, a sign overhead will welcome you to “Korea’s Grand Canyon.” That both are valleys carved out by water is true enough, but the comparison more or less ends there. Unlike the dusty desert vistas of Arizona’s most famous hole in the ground, Mureung Valley is a lush landscape of deep forests of gnarled pines, refreshingly cold streams, picturesque waterfalls and wispy clouds hanging in the peaks. If you think this sounds like a scene out of a traditional landscape painting, you wouldn’t be the first – painters, poets and writers have been coming here in search of inspiration for hundreds of years. In recognition of its scenic beauty, the valley was designated National Tourist Site No. 1 by the Korean government in 1971.

At Mureung Valley, the beauty comes quickly and in great abundance. At the very entrance of the park is Mureung Rock, a giant concrete slab on which hundreds of people could – and do – sit. Renowned Joseon Dynasty painter Kim Hong-do painted a scene of the rock, while great 16th-century calligrapher Yang Sa-eon carved an inscription into it, as did several other poets and artists.

A 4 km hike in and up the valley takes you past several waterfalls, gulches and surreal rock formations. One of the most visually arresting of the cataracts is the Ssang Pokpo (“Twin Falls”), featuring two cascades plunging down weathered granite cliffs into a single pool below. Just above that is another scenic waterfall, the Yongchu Pokpo.

The valley is also home to one medium-sized Buddhist temple, Samhwasa, as well as a small hermitage, Gwaneumsa, perched high atop one the gorge’s cliffs. If you’re fit enough, there are also hiking trails to the valley’s peaks, Mt. Dutasan (1,352 m) and Cheongoksan (1,403 m) – the views are killer, as are several of the potential falls, so walk with caution. 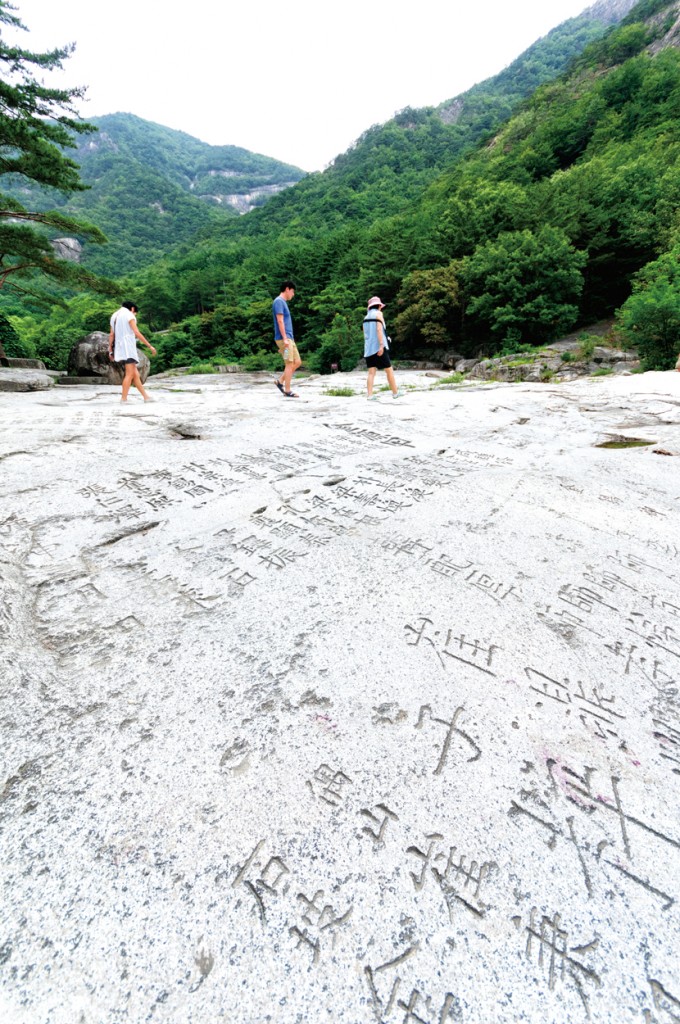 On a hill overlooking the aquamarine sea in southern Samcheok is one of Korea’s most unique – and certainly one of its most off-color – tourist destinations. Often called “Penis Park” by visiting Westerners, Haesindang Park is an arboretum-cum-sculpture park dedicated to the phallus. All told, the park is home to about 50 statues of the human penis ranging from the anatomically accurate to nightmarishly surreal. Some of the phalli double as park benches, and you’re encouraged to mount some of the works of art, too.

While it’s all good fun, it’s also based on a real piece of local history. According to legend, a young virgin soon to be married drowned offshore in the waters nearby and after her death, local villagers could no longer catch any fish. In order to soothe the dead girl’s spirit – and in so doing, boost the local fisheries industry – villagers took to carving small wooden phalli to give as offerings. After the offerings were made, the fish returned … or so the legend goes. This custom used to be practiced up and down the coast, but today only survives in a couple areas, most notably the village of Sinnam, where Haesindang Park is located.

In addition to penis art, the park also has a museum dedicated to the history, culture and livelihoods of local fishing villages, including a section on phallic art around the world. Some of the coastline around the park is beautiful, too. A short drive or bus ride (or 4 km walk) north of Haesindang Park is the fishing port of Janghohang, where you can rent a transparent canoe and explore the port’s remarkably clear waters and craggy rock formations. 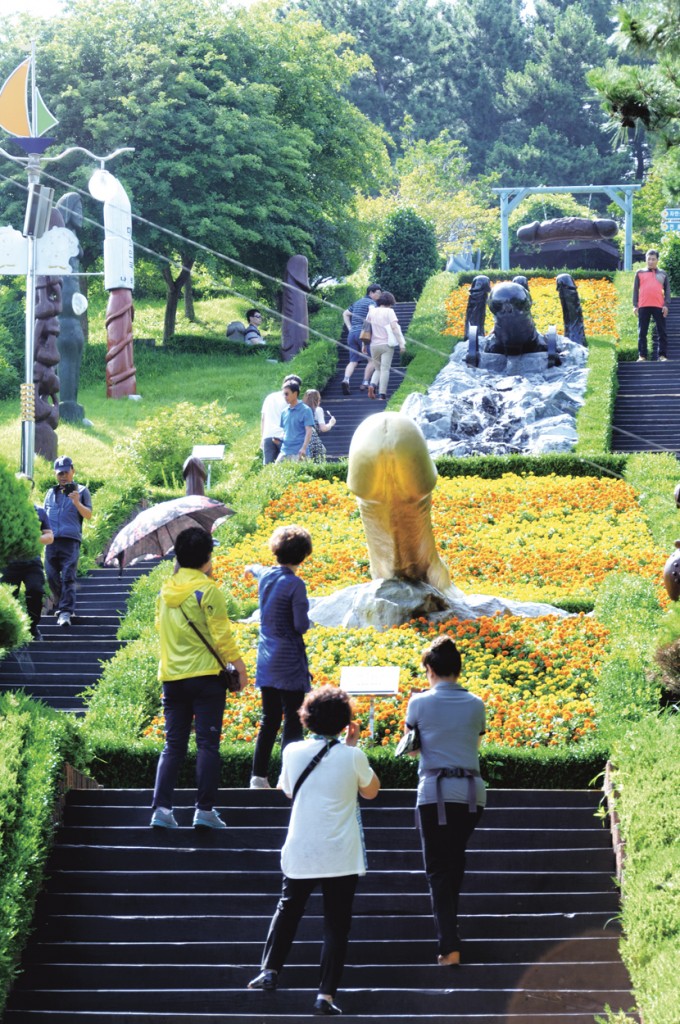 STAY> There are plenty of small pension houses along the coast. The beachside Donghae Rejuvenating Hot Spring Convention Hotel (T. 033-534-6682) is the swankiest resort in the area. You’ll find a good number of budget hotels and motels in and around downtown Donghae, too.

EAT> Two local specialties are gomchiguk, a spicy stew made from moray eel, and seonggye baekban, a bowl of rice mixed with cooked sea urchin. For both of these dishes, try Donga Sikdang (T. 033-574-5870) near the train station. 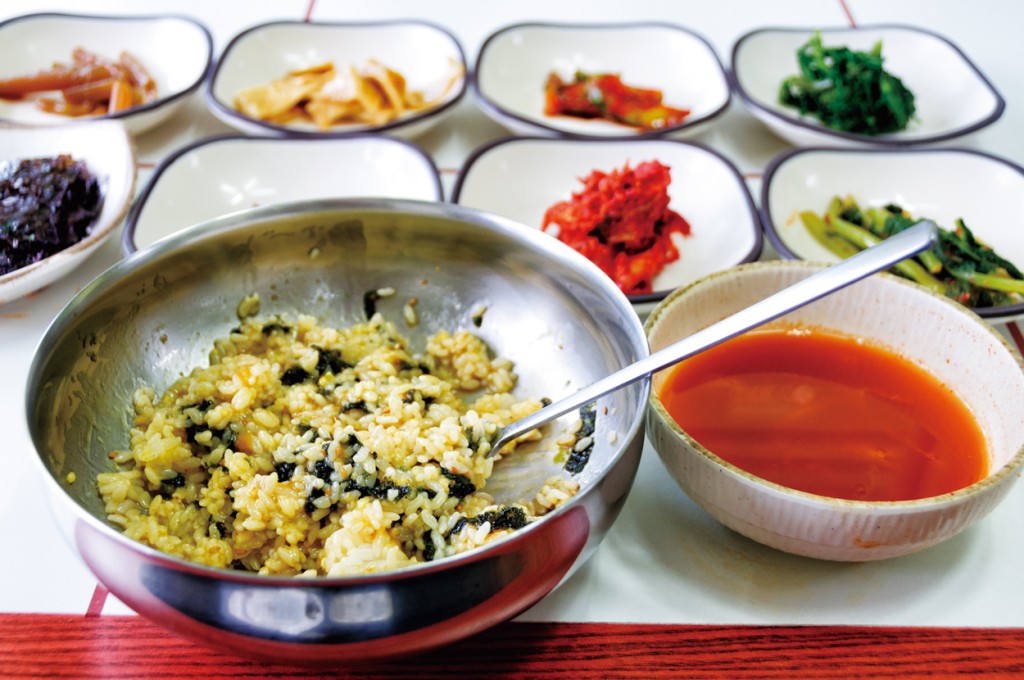 GO> Buses to Donghae and Samcheok depart from Seoul’s Express Bus Terminal (travel time: about 4 hours). There are also trains to Donghae from Seoul’s Cheongnyangni Station (travel time: 4 hours, 30 minutes).
For those who are interested, the city of Donghae is also an international port, with cruise ferries that link the city with Russia’s Vladivostok and Japan’s Sakaiminato.