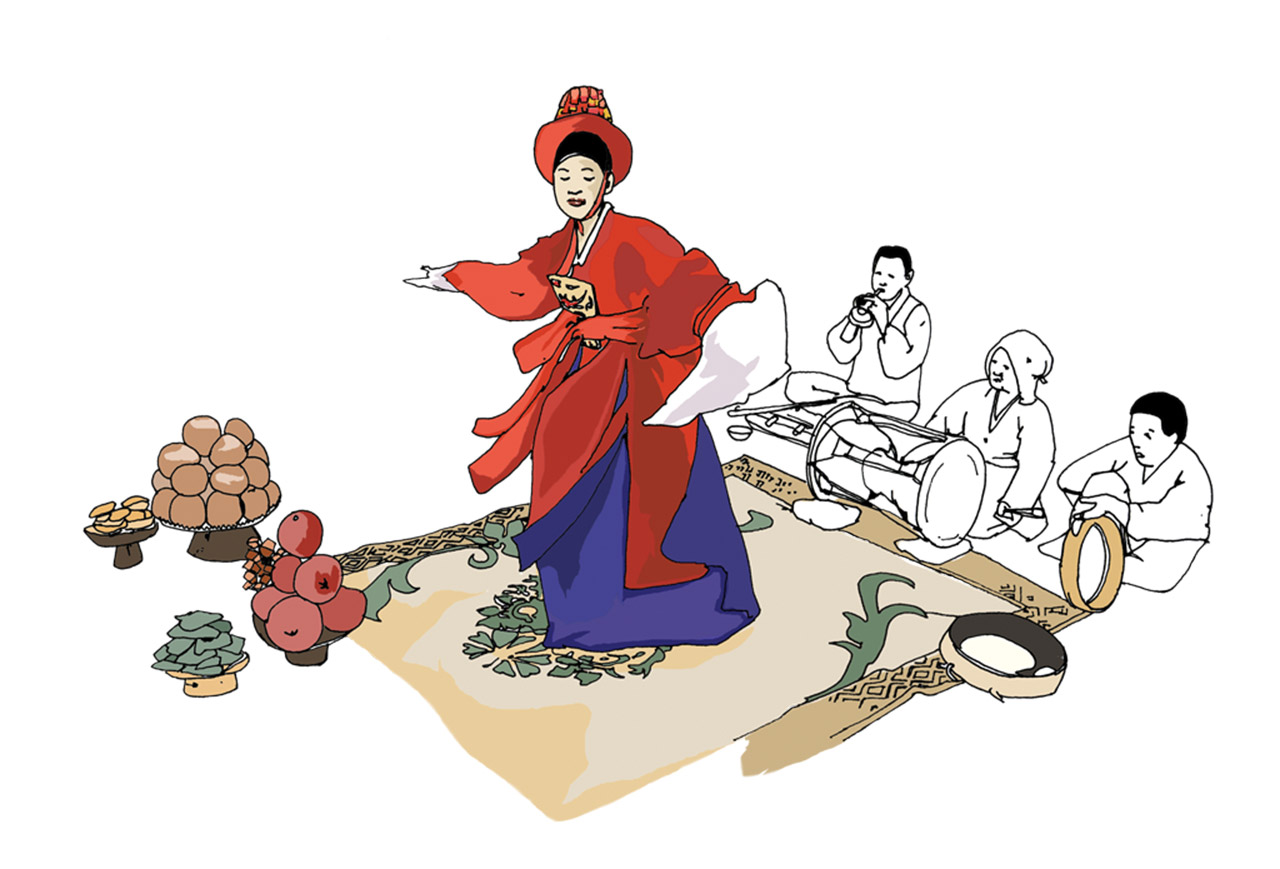 When Hongik University professor and cultural anthropologist Benjamin Joinau first came to Korea in 1994 as part of France’s national military service, he made the trip with some trepidation. “I was quite disappointed to be sent to Korea,” he recalls. “There wasn’t much material on Korea in French and English. In particular, some guidebooks were quite terrible about Korea, saying there was nothing to see. You got the impression that Korea was just a base to go to another country, like Japan or China. Even the pictures in the book were quite gloomy.”

“Sketches of Korea: An Illustrated Guide to Korean Culture,” released in May by Seoul Selection, is part Joinau’s effort to rectify the lack of good materials on Korea aimed at the general public. And in this struggle, he has teamed up with fellow longtime French expatriate and artist Elodie Dornand de Rouville to give international readers a basic but true-to-life look at daily life in Korea, not as the authorities wish to present it but as it really is. 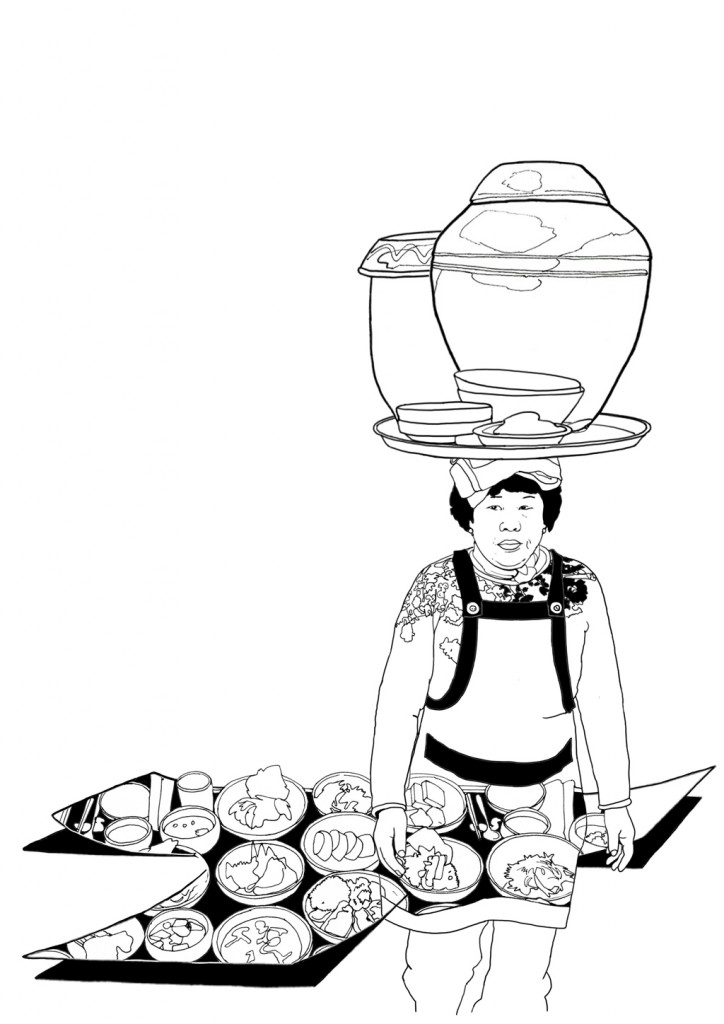 “Sketches of Korea” is the culmination of several years of work that began with a two-page column Joinau and Dornand de Rouville contributed to a local magazine.

Joinau and Dornand de Rouville’s work is a veritable cross-section of Korean life. It’s not a coffee table book of images of idyllic palace gardens and tranquil temples, although they’re in there, too, if you’re looking. A wide range of subjects are introduced, from plastic surgery and Korean drinking culture to Joseon Dynasty landscape paintings. “We wanted to cover Korean culture past and present, beginning with the present,” explains Joinau. “We were fed up with books published by private and national institutions … images that were pre-digested by the government and presented back to you as what you must see in Korea, like maedeup, kimchi, giwa. That’s just part of what you really see.”

Most books have nice images of a preconceived notion of Korean culture, says Joinau, stereotypes that are imposed and don’t correspond with the reality of what it’s like to live in Korea. “It’s supposed to be the end of the Joseon Dynasty and nothing else developed,” he quips. “We’ve included these images which you might see in a museum plus images of everyday life, including everyday objects, sports, plastic surgery, alcohol and food.”

Dornand de Rouville adds, “We wanted to make Korean culture closer to visitors, closer to reality, even though we know it’s just a collection of images. It’s not a sociological essay, but we are trying to be objective in a way.

When Dornand de Rouville landed in Korea a decade ago, she found it a bit difficult to get a grasp on things. “When I first arrived here everything was so different, I was completely lost,” she says, explaining that she worked hard to get a different perspective, noting, for instance, how the old mixed with elements of modernity.

Dornand de Rouville recalls that Seoul was a tough place to stroll about when she first arrived, and this definitely changes how you look at the city – literally. “Instead of looking at the level of the street or looking down, you had to look up,” he says. “You had to look differently.”

In addition to changing her perspective, Dornand de Rouville struggled to find the right models for her work. “I tried not to draw cold sketches, but to be more dynamic with the people. To draw something more alive,” she says. To capture modern concepts was easy, she says, but for something old, you needed to find a proper model to add new energy. Preferring to sketch at home from memory rather than on the street, she spent much of her time walking around and visiting museums to learn more about the images she would later recreate. “I need to have proximity with an object to sketch it,” she says.

Just as one’s familiarity with the local culture will impact one’s impression, so does the length of one’s sojourn. Having lived on the peninsula for over two decades, Joinau understands this evolving relationship quite well. “I changed during the last 20 years,” he says. “When you change with your object of observation, it’s hard to say what has changed.” 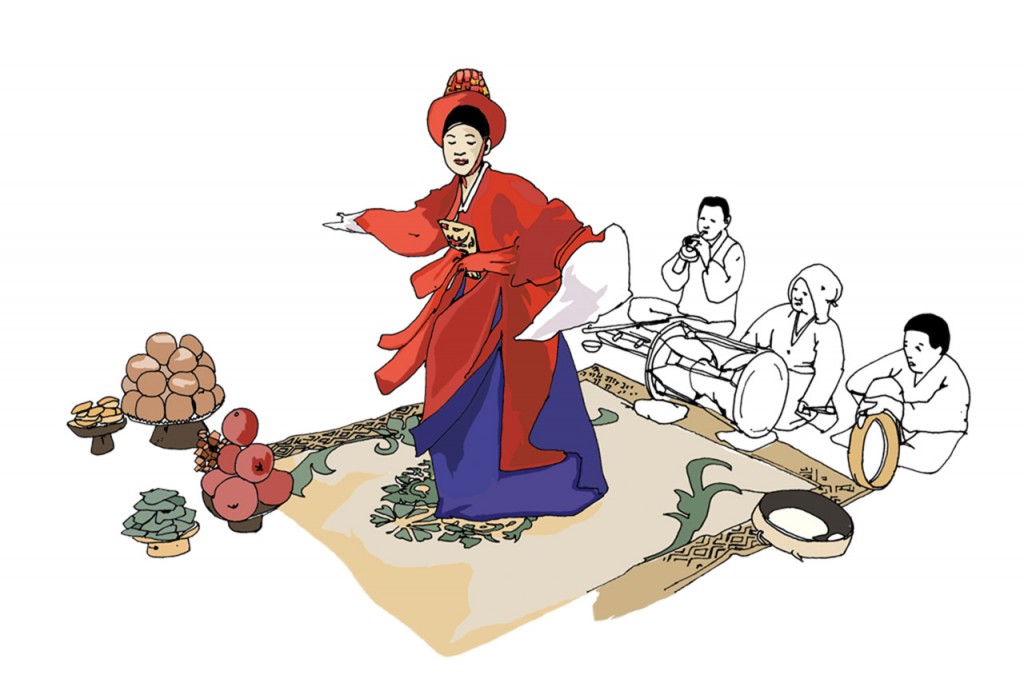 Getting – and presenting – things right

Choosing which topics to address, a process that can often feel arbitrary, and portraying those topics accurately proved difficult. “It’s not that I’m completely ignorant about the subjects, but I’m not a specialist on everything about Korea,” explains Joinau. “When you write a guidebook, it seems easy, but there are all these small details that you have to double check, triple check.”

Keeping your facts straight is even more challenging when there’s no agreement as to what those facts are. For instance, there are several academic theories as to why Koreans of the Joseon Dynasty wore white clothing. An exasperated Joinau recalls, “You have a lot of different theories among scholars themselves. How do you sum that up in one paragraph?”

Joinau and Dornand de Rouville hope that through their book, international readers might be able to break through the stereotypes about Korea presented by both journalists and Koreans themselves. “You have the same stereotypes going around again and again,” Joinau explains. “You have to either judge positively and praise Korea – mostly K-pop and K-Wave – or on the other side you have this Orientalist discourse. Two extremes.” Korea isn’t good or bad, he says; it is a complicated country with a complex situation.

Looking back on the process, he adds, “It’s just a small cultural guidebook. We would be happy if the reader could, through this little window, learn something they did not know, grab some interest and start from there to develop deeper cultural knowledge about it. We hope to give people the initiative to go further.”