This is the sentiment that runs through your mind as you stand on Mt. Yongmasan’s observation deck, gazing down at the entirety of Seoul below. Other mountains offer superb views of the city, too, of course, but none yield so complete a vista, from the giant skyscrapers of Gangnam in the south to the rugged peaks of Bukhansan National Park in the north. As the sun sets behind the sweeping mountains in the distance, the lights turn on and the landscape transforms into an endless, pulsating mass of energy. It’s a view that both inspires and rejuvenates.

Mt. Yongmasan’s only rival in the surrounding area is Mt. Achasan, with the scenic Seoul Dulle-gil Course 2 trekking course linking the two scenic peaks as they form the boundary between Seoul to the east and the city of Guri to the west. Easy-to-manage, well-appointed and family-friendly, the 12.6 km trail is as educational as it is beautiful: The views are breathtaking, but the trail also serves as a walk back in time to ancient Korean history, when great armies fought here to wrest control of hilltop fortresses overlooking the river and, by extension, the entire Korean Peninsula. 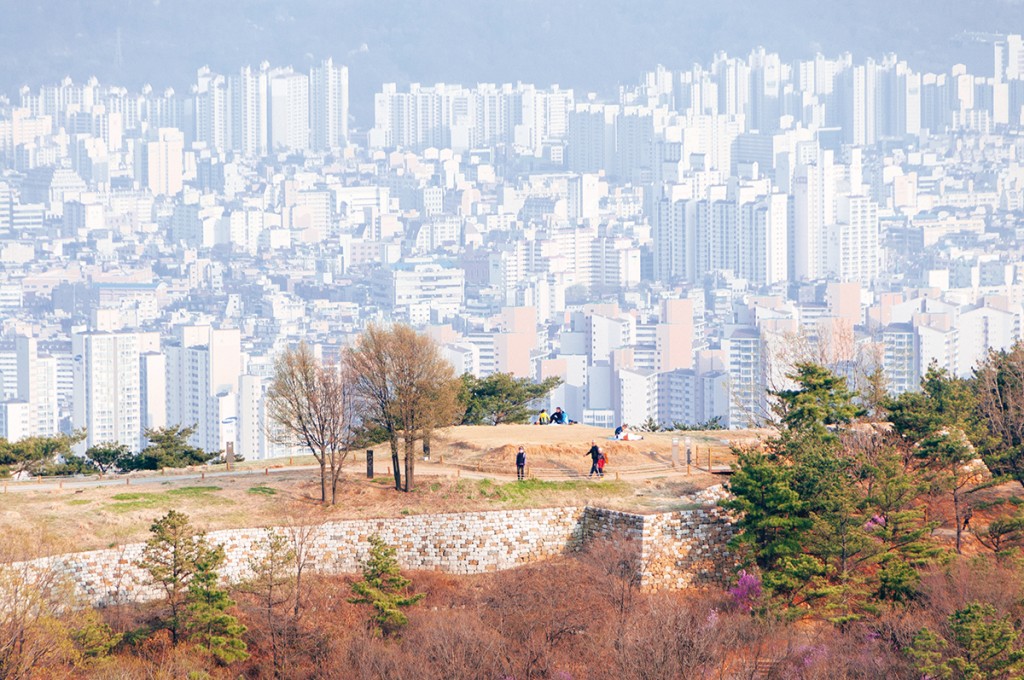 Completed in 2014, the Seoul Dulle-gil is a series of eight walking trails that link the peaks, ridges and valleys that ring the outskirts of the city. Their main purpose is to provide Seoulites with a space where they can recharge and reconnect amid the city’s natural splendor. The system was designed to be accessible, with trailheads located near subway stations, courses that are blissfully easy to walk and trails that are well-marked, safe and negotiable by everyone from toddlers to the elderly.

To help you keep track of where you’ve been, course administrators provide a small booklet you can “stamp” at red mailboxes at the head of each trail. You can usually find maps at each trailhead as well. 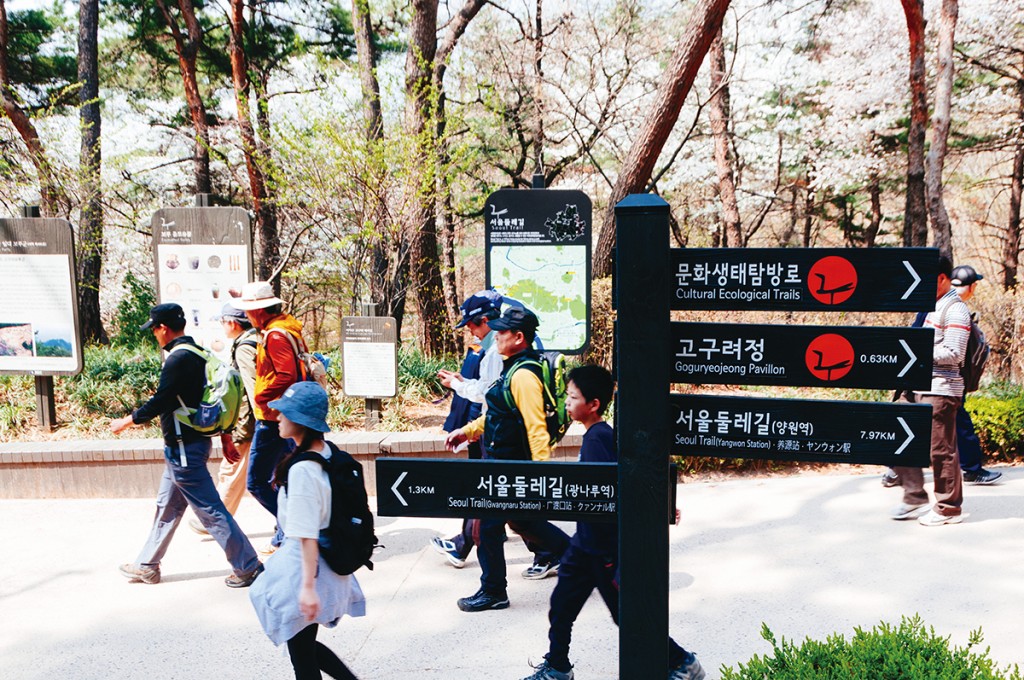 Relaxing under the pines

While each of the course’s eight sections is beautiful in its own right, Course 2 may be the most dramatic. The trail, which takes about five hours to complete, follows the ridgeline of Mt. Yongmasan (348 m) and Mt. Achasan (287 m) from Hwarangdae Station (Line 6) in the north to Gwangnaru Station (Line 5) in the south. Many choose to start from the latter station, as it is closer to the main cluster of scenic peaks. This will be our starting point as well.

From Exit 1 of Gwangnaru Station, follow the signs for 15 minutes until you reach Achasan Ecological Park, a botanical garden at the foot of Mt. Achasan. You’ll find a pond, a mineral spring, plenty of flowering plants and, best of all, a lovely forest full of the sensually curved pine trees loved by generations of Korean painters and photographers. The forest also makes a great place to relax in the shade, enjoy a bite to eat and breathe in the pine scent. Educational programs are held here as well. 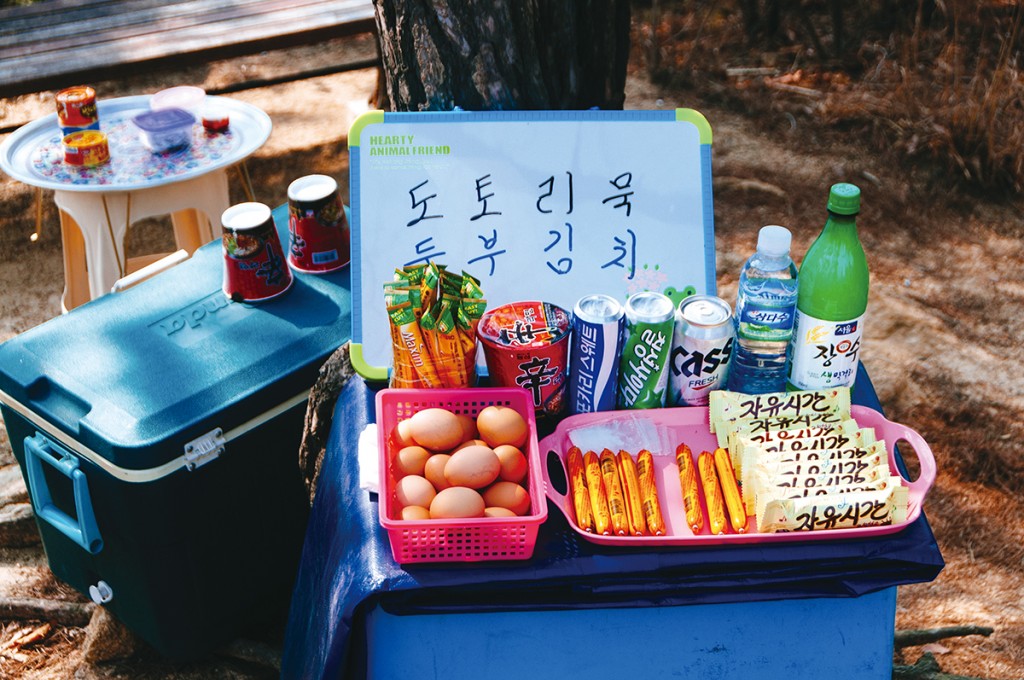 Sun up, sun down

From Achasan Ecological Park, follow the trail up Mt. Achasan to Sunrise Square, a rocky lookout with panoramic views of both Seoul to the west and the bends of the Hangang River to the east. The mountain’s location on the far eastern outskirt of town gives it some of the earliest sunrises in the city, which makes the square a very popular destination  on Jan. 1 when it hosts a New Year’s festival. The view of the sun popping out from behind the peaks to the east as it bathes the river in a warm, orange light is beautiful indeed, but the spot is also known for its sunsets and night views of Seoul, especially when the skies are clear.

Clash of the kingdoms

From Sunrise Square, continue along the ridgeline toward Mt. Yongmasan, another scenic peak attached to Mt. Achasan by way of a narrow saddle. Much of the trail is lined by craggy old pine trees renowned for their beauty, and along the way you’ll pass a number of scenic lookouts that are ideal for taking in the mountains and cityscape below.

In the days of the Three Kingdoms Period (57 B.C.-A.D. 668), Mt. Achasan was a stronghold that was crucial to the defense of the strategically important Hangang River valley, a site that was considered vital to controlling the whole of Korea. In 475, forces from the northern kingdom of Goguryeo seized command of the valley from the southwestern kingdom of Baekje, resulting in the Baekje king being brought to a fortress on the mountain and executed. In 590, troops from the southeastern kingdom of Silla invaded the valley, killing the great Goguryeo general Ondal in a battle on the mountainside. 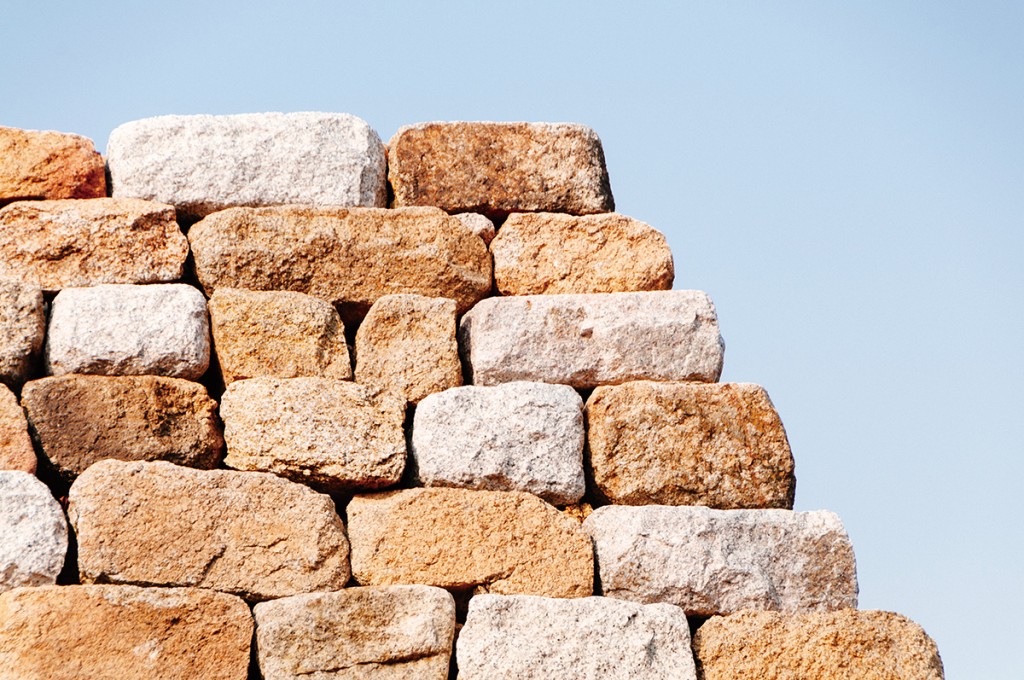 Given its military value, Mt. Achasan was highly fortified, with the Goguryeo kingdom building five stone bastions along the ridgeline. One of the bastions has been fully restored, and the sweeping views it offers are not to be missed. The mountain’s major fortress, Achasanseong, is not on the trail, but can be easily visited by ways of a short detour in front of Sunrise Square.

Where heroes and artists lay

The peak of Mt. Yongmasan, the highest point along the ridge, is a pleasant spot to rest, but for the best view of anywhere on the trail follow the steps down to the observation deck just below the peak – the panoramic view of Seoul is breathtaking, particularly at sunset.

From Mt. Yongmasan, continue trekking north for a few kilometers and you will reach the peak of Mt. Mangusan, where you’ll find another restored stone bastion. Keep following the path down until you get to Mangu Cemetery, a historic public burial space created in 1933. As you might imagine, it’s a peaceful, reflective place to stroll about. Some of early modern Korea’s most notable political and cultural figures were laid to rest here, including renowned Buddhist monk, poet and independence activist Han Yong-un and beloved painter Lee Jung-seop.

Not far from the cemetery is Jungnang Camping Forest, where you can pitch your tent for the low cost of KRW 25,000 a night (plus KRW 3,000 for electricity). Each site has its own barbecue grill. 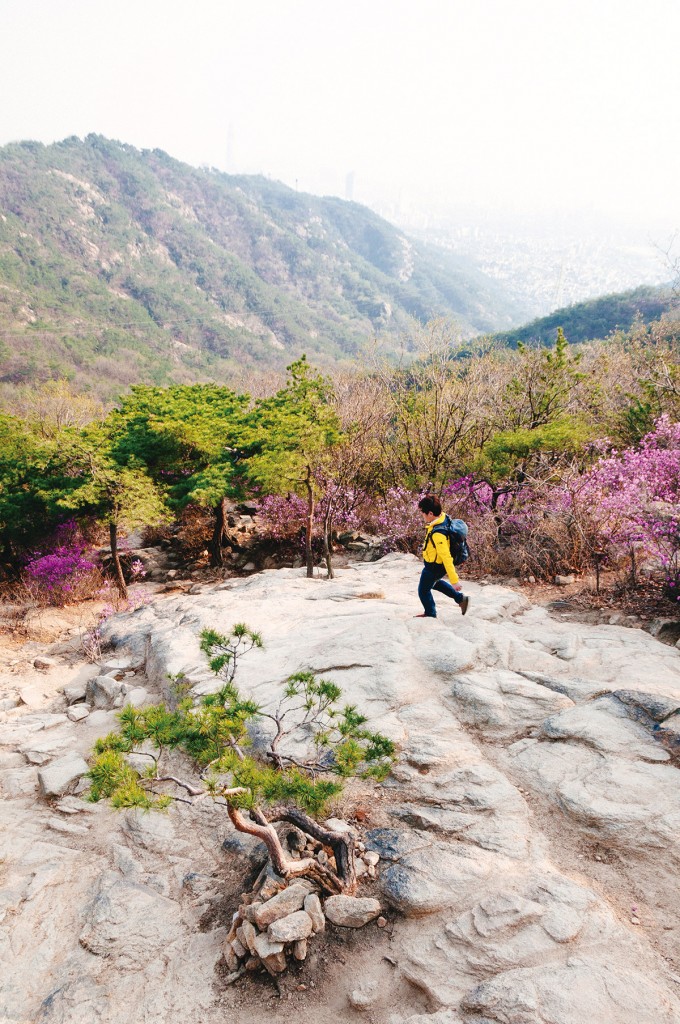 EAT> It’s probably best to prepare your food ahead of time –
a roll of gimbap makes the perfect hiking food. If you’d like to procure your sustenance on the road, however, you’ll find merchants selling drinks and simple snacks at several points along the trail.