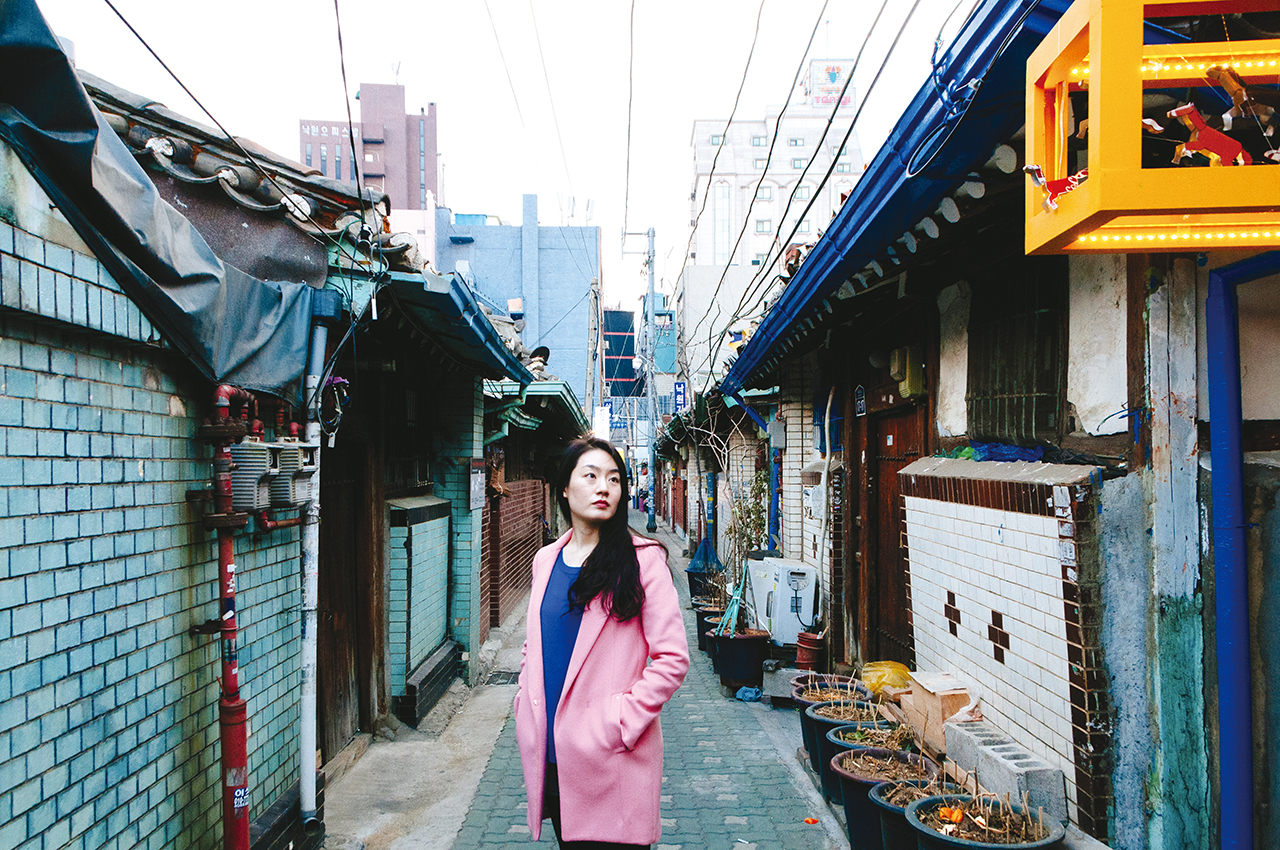 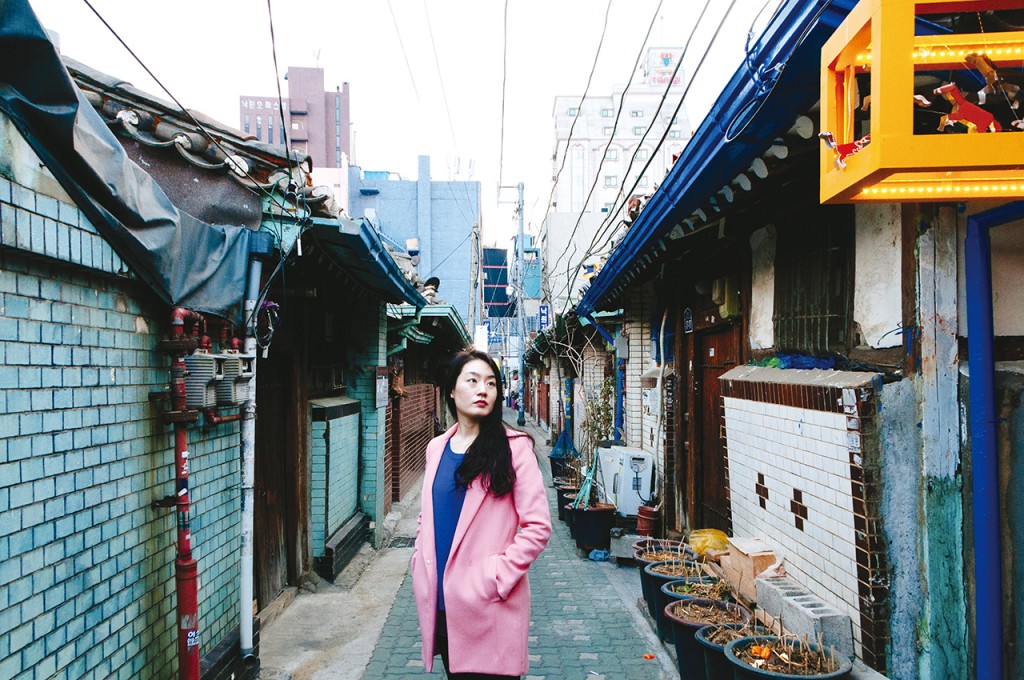 [dropcap letter=”F”]inding Ikseon-dong for the first time is a bit like discovering a long-thought-extinct species in the jungle. Hidden from outside view by the palisade of concrete high-rises that surround it, Ikseon-dong is Seoul’s least-known but, perhaps unsurprisingly, best-preserved neighborhood of Korean-style homes, or hanok. Seen from the rooftop garden of the landmark Ibis Ambassador Hotel, it looks like a chaotic maze of tile, telephone poles and pavement, an oasis of old-school charm the wrecking ball of urban redevelopment seemingly forgot.

Until very recently, the neighborhood existed largely under the radar and saw very few visitors–but this is changing. Attracted by its low rents and authentic atmosphere, creatives are moving in and setting up cafés, bars and cultural spaces. Tourists are beginning to discover its charms, too, infusing the alleyways with an oft-missing sense of vitality.

The tangled web of low-rise, tile-roofed homes you see in Ikseon-dong today arose some 70 years ago as Seoul began to grow into a modern city. “Built in the early 1930s, Ikseon-dong was the first large-scale hanok development in Seoul,” explains Robert Fouser, a scholar who has written much about Seoul’s historic neighborhoods. Its cluster of hanok homes, lined up townhouse-style along narrow backstreets, became the model for the much better-known Bukchon Hanok Village, today one of Seoul’s most popular tourist destinations. 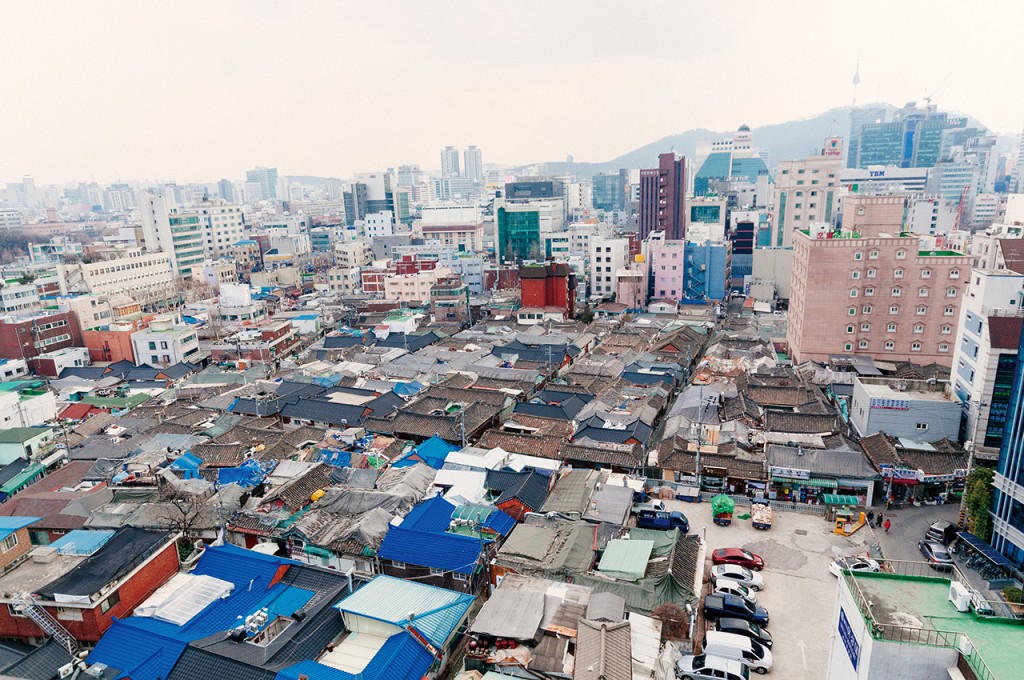 After the Korean War, Ikseon-dong found itself as a haven for a  prosperous and lively community. Most of Seoul’s biggest yojeong – upscale restaurants where comely young women wearing Korean traditional clothing, or hanbok, entertained wealthy patrons with traditional music, dance and conversation – could be found among its alleys. By the early 2000s, however, the yojeong had all closed down and the neighborhood had become a forgotten quasi-slum. In 2004, plans were put forth to redevelop (read: tear down) the old hanok. With the neighborhood facing imminent demolition, many homes fell into disrepair.

Thanks to the opposition raised by residents and preservationists, however, Ikseon-dong’s hanok still stand, and life is returning to its quiet streets. On a weekend, its lanes are full of visitors, both local and international, who have come to take in its old-timey allure. For many, it evokes nostalgia for the time before redevelopment destroyed much of old Seoul and what remained was commercialized beyond recognition. “With its telephone poles (and) green-brick alleys, Ikseon-dong reminds me of Bukchon in the early 1980s when I was learning Korean in Seoul,” says Fouser. “Seoul needs its last hanok-only island.

Where tradition and creativity coexist

The island comparison is apt – viewed from above, it really has the appearance of an island of hanok in a sea of concrete. Unlike Bukchon, where the homes are perfectly manicured, Ikseon-dong’s alleyways are delightfully ramshackle. And unlike Seochon, another famous hanok district that is now filled with cafés and galleries, most of Ikseon-dong’s homes are still residential, with a few hanbok shops – a legacy harkening back to the district’s glory days as a nightlife hotspot – sprinkled in. At one end of the “island,” not far from Jongno 3-ga Station, is a collection of old-school barbecue restaurants and pubs popular for their reasonable prices and lively atmosphere.

Over the last couple of years, however, the neighborhood’s mostly elderly residents have been joined by Seoul’s younger creative class. Captivated by the simple beauty of the area, not to mention its blissfully affordable rents, artists, designers and writers have been setting up shop within its side streets, creating something that  Ikseon-dong hadn’t seen in a long time: an atmosphere of youthful exuberance. 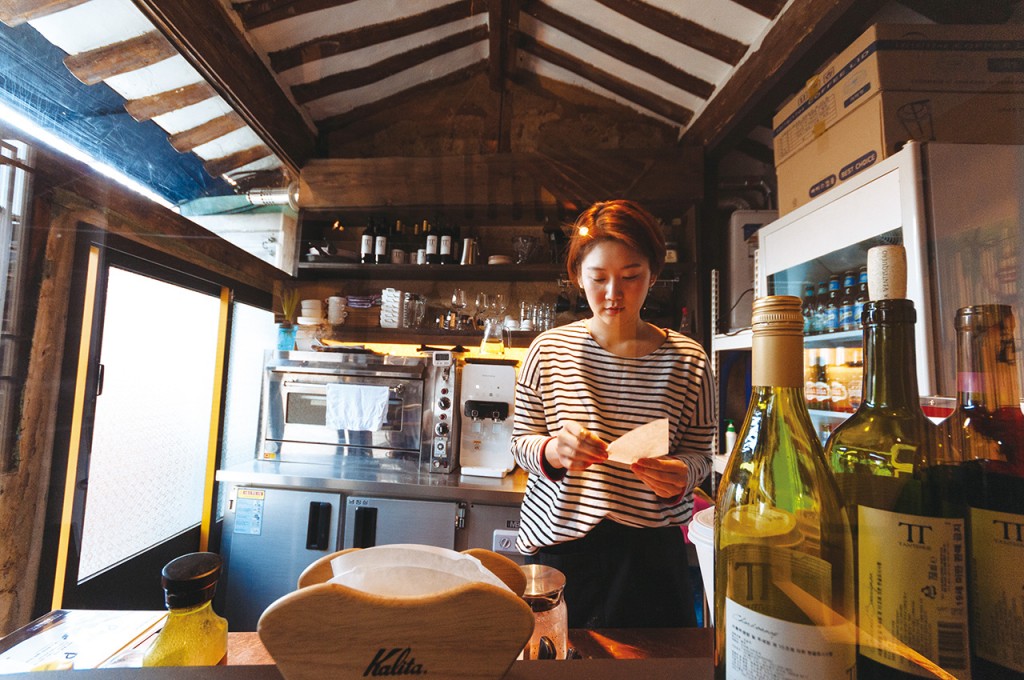 Young artist Park Ji-hyun, who opened the lovely café/exhibit space Ikdong Dabang (T. 070-8690-2759) in January, was drawn to the district’s rustic ambiance, a far cry from the consumption-driven rat race found elsewhere. “Step inside its alleyways from the hustle and bustle of downtown and it feels like you’re time traveling,” she says.

To build their space, Park and her partner have beautifully renovated a 70-year-old hanok, preserving as much of the original structure as they could. In addition to serving fine coffee, wine and food, the small eatery also functions as an exhibition space. Come springtime, it will also host musical performances in its cozy courtyard. Park is working to strengthen the sense of community and protect the neighborhood’s unique charm, explaining, “The Ikseon-dong we want is one that develops while preserving how it looks now.” Her restaurant serves as a meeting place for local residents, many of whom have reacted with pleasant surprise to their newest neighbor. “With young people moving in, it’s brought energy to the area,” she says. “The neighborhood’s got life, and it seems the elderly residents like that.”

Not far from Ikdong Dabang is Sik Mool (T. 747-4854), an exceptionally cool café/bar opened by fashion photographer Louis Park. Cobbled together from four remodeled hanok – as explained by Park, “I believe architecture should communicate” – the space strikes a delightful harmony between East and West, its modernist furniture and Soviet propaganda posters oddly complimenting its Korean roof, tile walls and wooden beams. Behind its courtyard/smoking area, fashion designer Minky Ha has turned a Korean-style room into a workshop. 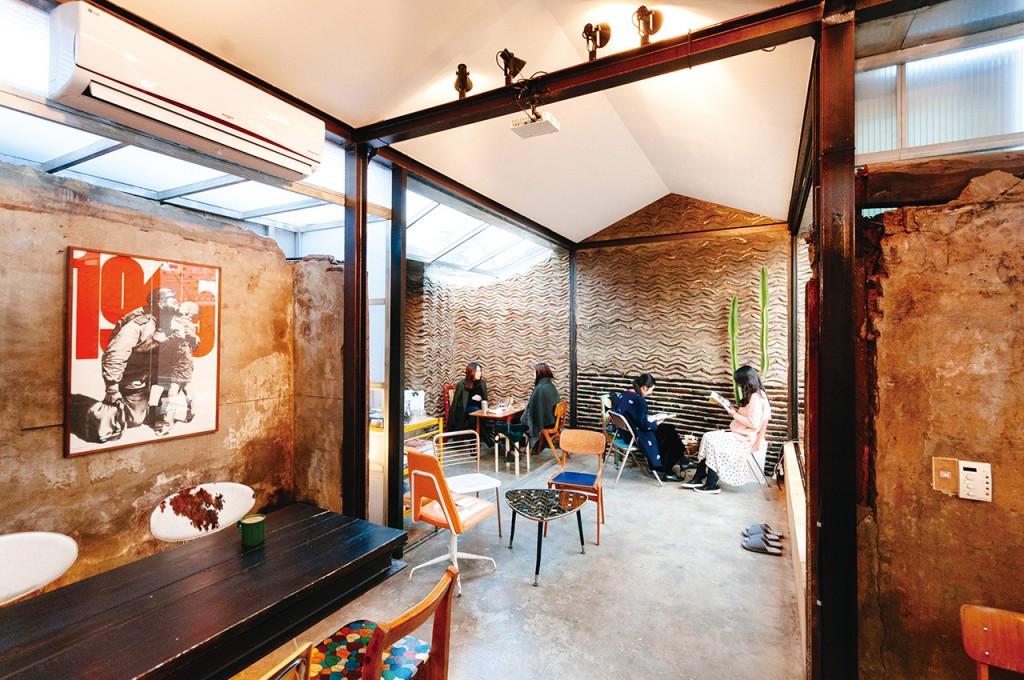 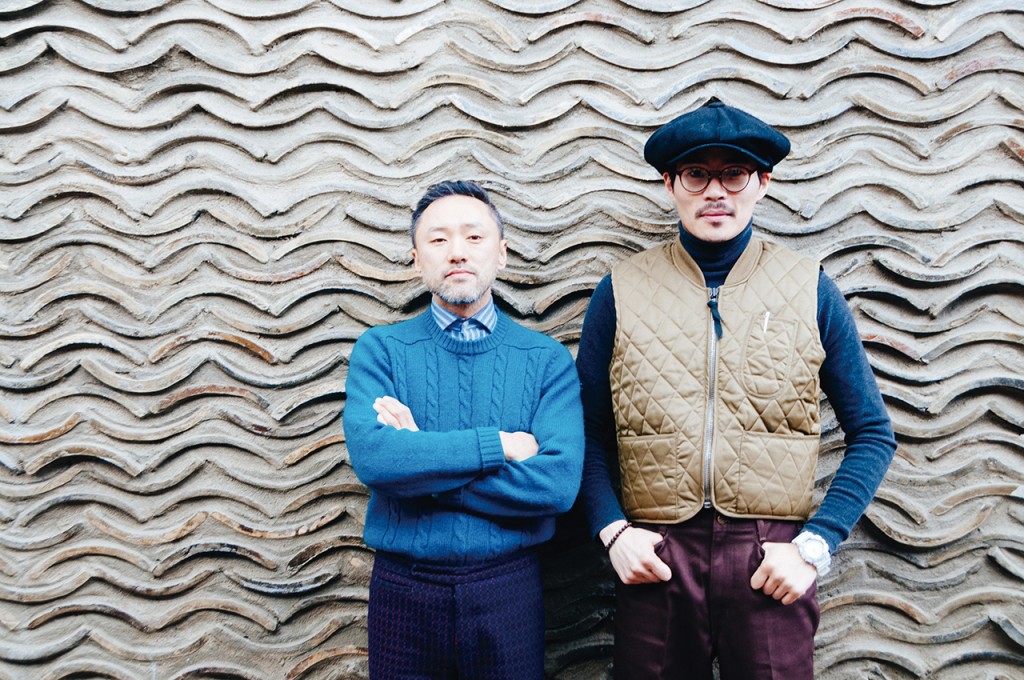 Almost by stealth, Sik Mool is becoming one of the city’s trendiest nightspots you’ve never heard of, earning a recent mention in the Korean edition of Vogue. The cocktail menu is thorough, the exotic atmosphere entrancing and the clientele hip and diverse. “Would you expect a place like this in a neighborhood like this?” asks Park.

While the youngsters may have brought a breath of fresh air, they aren’t the only game in town. The Korean traditional teahouse Tteuran (T. 745-7420), open since 2009, is now an Ikseon-dong institution – and, incidentally, one of this writer’s favorite small cafés. Its name means “inner garden,” and proving that there is truth in advertising, the 80-year-old hanok is blessed with a beautiful garden courtyard you can gaze out over as you sip one of its wide range of rejuvenating herbal and medicinal teas. Appearing in the 2009 Korean-Japanese film “Café Seoul,” the eatery is popular with Japanese visitors but has still retained its “hidden gem” feel. It’s the perfect place to relax for an afternoon. 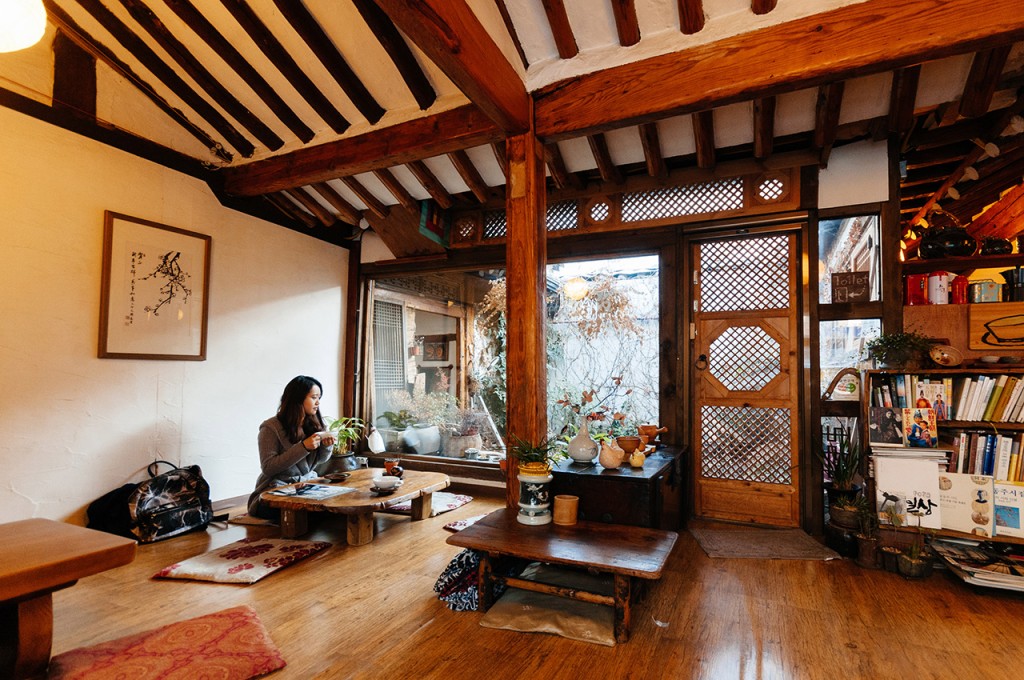 Tteuran functions very much as the local salon – anybody connected to Ikseon-dong knows the tea shop and its owner, the very friendly Kim Aeran, who is a virtual encyclopedia of neighborhood history. “I happened upon this alleyway six years ago. I was charmed by the color of the old roof tiles and signed a contact for this place right there without much of a plan,” she says. It’s not just the old alleyways and old homes she likes; she also loves its people, particularly the merchants who have been plying their trades in and around the neighborhood for decades.

Many customers comment on the peace and tranquility of Kim’s shop. “I like to just sit here and relax when there aren’t any customers,” she says, laughing.

How long the calm lasts, however, is anybody’s guess. Once an area gets hot, it’s easy for it to become commercialized. This is particularly true for Ikseon-dong, which is surrounded by major commercial districts like Jongno and Insa-dong. “It’s something we worried about as we began our project,” explains Park of Ikdong Dabang. “So we felt there needed to be systemic protections.”

For now, however, Ikseon-dong remains as it always has been: quiet, peaceful and exceptionally charming. Kim of Tteuran encourages visitors to pay attention to the little details that make the neighborhood special – the old window frames, the rusted metalwork, the old wall tiles, the things you just can’t buy anymore. “You should come here to see an unpolished neighborhood, the kind you can find nowhere else in Seoul.”

EAT> On the Jongno side of the neighborhood is a collection of ramshackle barbecue joints and bars that, until recently, catered largely to locals. Now they’re popular with everyone, and in warmer months, these places have lots of outdoor seating, too. This writer particularly recommends the friendly Mi Galmaegisal (T. 3672-0081), where the pork skirt meat, or galmaegisal, is first rate. A newer place to try is EX-ON dong 121 (T. 765-0121), an old hanok renovated into a chic café/bistro by a publisher who moved into the neighborhood. Try the lentil bean curry. For something decidedly non-Korean, stop by the wonderful expat-run gastropub Brew 3.14π (T. 4178-3014), located in an alleyway behind the Ibis Ambassador Hotel. It’s a great spot for craft beer, pizza and conversation.

STAY> The Ibis Ambassador Insa-dong (T. 6730-1101) is a popular place to stay for international visitors, and the view from the roof garden is, in a word, stunning.

For something much more local in character, try the lovely All-J Guest House (T. 010-8156-8626), an old hanok home now used as a place to stay. It offers cultural programs like tea ceremonies and traditional dress wearings, too. Another hanok available for rent is Jongno Hanokjip, operated by Gangnam Dabang (T. 070-8690-2759).

GO> From Exit 5 of Jongno 3-ga Station (Line 5), walk in the direction of Insa-dong and swing a right at the Nagwon Musical Instrument Arcade. Follow the main road until you see Seonil Tteokjip, a rice cake shop, and swing another right. Follow that road until you get to the Ibis Ambassador Insa-dong. Enter the alleyways across from the hotel to begin your exploration.