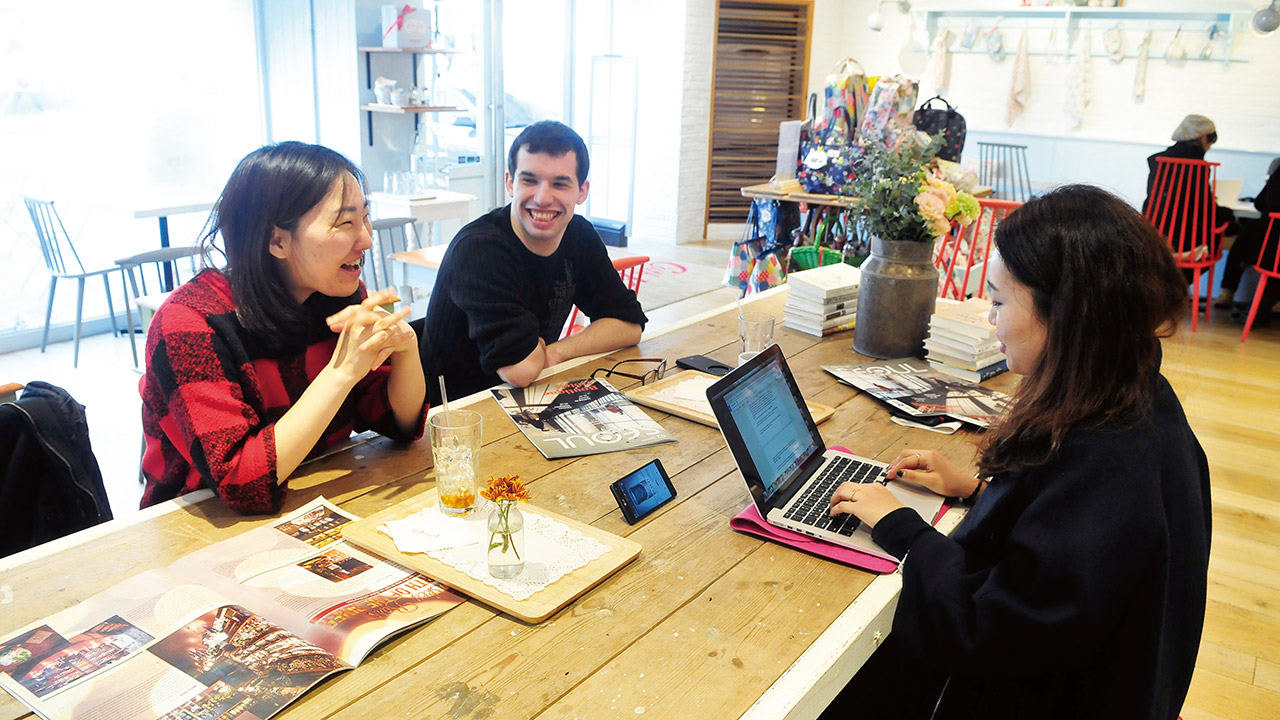 SEOUL holds a discussion on the Korean education system

[dropcap letter=”W”]hen President Obama lauded the Korean education system back in 2011, Korean citizens expressed conflicting responses to the remarks. Some took pride in the system because it begets great standardized test scores: In the last batch of results from the Program for International Student Assessment, a triennial exam completed by 70 countries worldwide, Korean students ranked fifth in math, seventh in science and fifth in reading among OECD members.

After the American president’s kind words were made public, other locals were more critical, questioning whether “education fever” is worth the pressure it places on students. The same youth who have become well-known for their outstanding performance on international exams are also known to spend the greatest number of hours at school year-round. On the streets of Chungdam or Gangnam, it’s not uncommon to see vans unloading elementary students to different hagwons, or private academies, until late at night on any day of the week.

Given that March in Korea marks the start of a new school year, SEOUL thought this month would be a fitting time to talk about education in Korea. Two panelists volunteered to share their thoughts on the subject. The first, Sohn Jeong-eun, was born in Korea and attended the local school system, though also had the experience of studying abroad in Moscow for a language exchange program. The second, Michal Mocarski, attended elementary and high school in Poland and started university there before  coming to Korea to study Korean. Michal has been in Korea for three years and is now studying journalism at Kyung Hee University.

What are some characteristics you see in Korean education system?

Michal: I think the biggest characteristic is learning by heart. Learning everything as it is in the book without really questioning it, questioning your professor or asking any questions at all. I think that’s the biggest difference between schools in Poland and here. I don’t see people asking any questions during classes – they just learn everything. While in my country students try to criticize even the professor.

Jeong-eun: In secondary school, the merits of studying in Korea are that you learn every subject. I applied to be a diplomatic major in high school, but I also had to learn physics, chemistry and lots of other stuff. Upon graduating high school, people have general knowledge on most subjects. Regarding education in universities, I’m a bit critical. As I mentioned before, we don’t have enough experience to know how to answer and think about issues in a discussion setting.

Then how are classes usually organized?

Jeong-eun: The professor just presents the material he prepared and he shares his knowledge with us. If one class continues for 50 minutes, then we have only four or 10 minutes designated at the end for questions, so most students don’t ask a question. If one asks a question and if the professor takes a long time to answer it, it’s holding back the class, so students are afraid of making others feel uncomfortable.

Michal: In Korea, the professor asks after a lecture if there are any questions about the topic, and then someone asks a question. But the difference is that (in Poland) we don’t wait for the professor; we just ask. Here, people tend to ask their friends or people sitting next to them if they don’t understand something.

Jeong-eun: Many older generations believe that what college you go to will determine your next career. Going to a good college means you’ll land in a good job, have more success doing start-ups or rise in social status, so parents try their best to send their child to good schools. Many (parents of middle- and high-school students) I know consistently check their child’s report card and plan together what they have to do to get a better grade.

Michal: It’s their retirement system. Your insurance for the future is your children, so parents work to show their children that they care and spend so much money in their child’s education so later their child can be successful and take care of the parents in the future. The second point is money: University fees are really expensive here compared to my country. In my country, it’s free because it’s paid from our taxes, so it’s okay if you fail, change your major or study a little more. But here one mistake can cost you millions of won. I think that’s why they want to be sure that their children are going to succeed.

How does your experience of studying outside Korea compare to studying here?

Michal: I only attended a Polish university for a few months, so it’s hard to compare. But in my experience, Korea uses secondary sources but in Poland we use primary sources or original journals. For example, in Korea, you learn about Marx from someone who interpreted Marx, while in Poland we learn directly from (reading) Marx. Poland also has college entrance exams, and there are people that are crazy about it, but not as crazy as here.

Jeong-eun: I was a language exchange student so I cannot say I fully experienced the Russian education system. But I was surprised to see that most language classes and even regular classes had verbal exams.

The discussion then moved on to the general culture surrounding studying in Korea. Michal mentioned how surprised he was to see students studying at cafés and even on public transportation. He also thought it was interesting to see so many different kinds of dongari, or extracurricular activity groups, available at his university, and how much drinking was involved at social events. Jeong-eun brought up a private academy class she took that taught her how to draw an apple in a certain way that would help her to perform better on art exams. She mentioned that some students even take private lessons for physical education.

The group tried to end the discussion on a positive note by commenting that things are slowly changing for the better. In 2013, Korea’s ministry of education began the pilot program for a “test-free semester” at dozens of middle schools across the country. Under the program, middle-school students would be taught a basic curriculum that does not include any formal examination, thus allowing students to enjoy a more autonomous learning experience. Many are hoping that these kinds of measures will curb the rote-learning system and foster creativity in students. Though challenges remain, as long as the changes reflect the culture and history that is unique to this nation, the future is indeed bright for the new generation of Korean students.