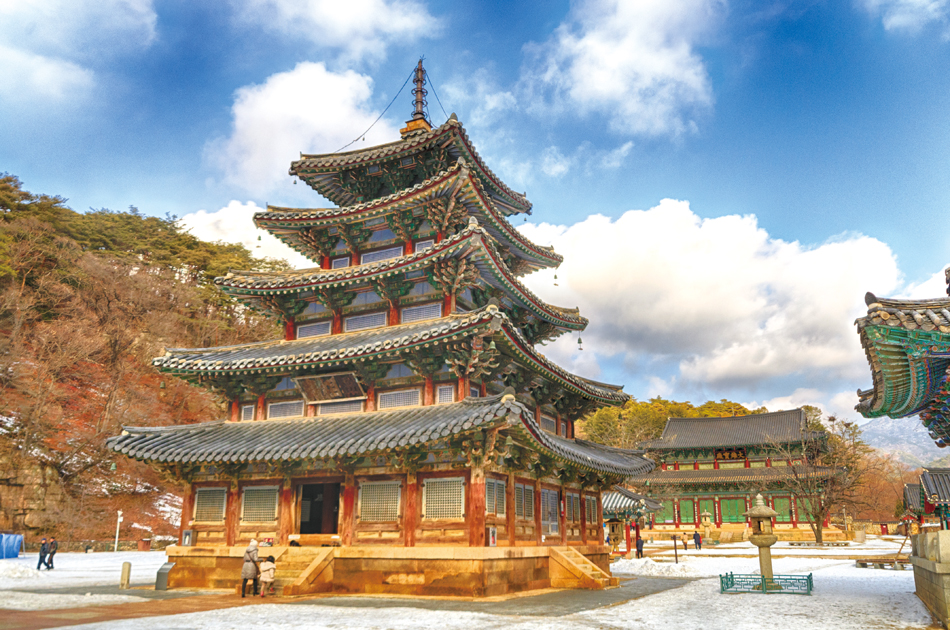 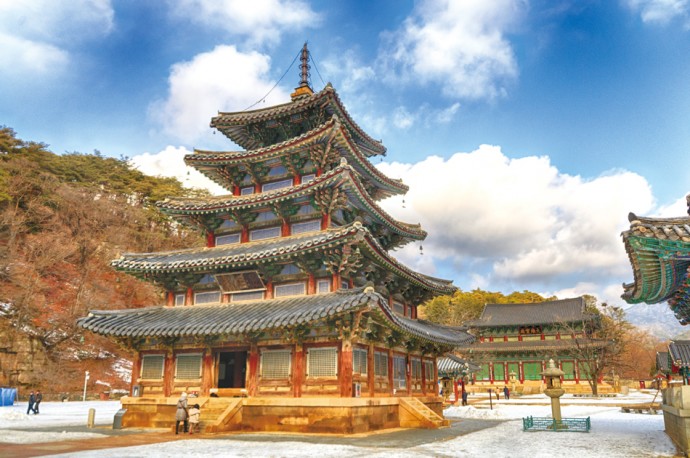 [dropcap letter=”D”]arkness descends over Beopjusa Temple, and a monk strikes the temple bell, calling other monks to the prayer hall for evening services. The rich, sonorous toll of the grand bell reverberates throughout the valley, and silhouettes of shaved heads and fluttering robes can be seen in the courtyard, illuminated by lanterns and the moonlight. The monks make their way to the main hall and take their places on mats before the triad of golden Buddhas on the altar. After a few minutes, the echo of the bell stops, and the chanting of the monks begins. Soon, an ethereal sound fills the precinct, captivating all who hear it with its entrancing harmonies.

This is just another evening at Beopjusa, one of Korea’s most treasured Buddhist monasteries. Though the site’s relics serve as a testament to the monastery’s proud history over the past century and a half, its treasures of more modern vintage, such as the 33-meter-tall Golden Maitreya Statue of National Unification erected in 1990, are equally breathtaking.

Like many of Korea’s other major Buddhist temples and monasteries, Beopjusa hosts a number of rewarding Templestay programs. These short recesses from one’s daily routine allow participants to have a brief experience of Korean temple life and gain a deeper appreciation for Korea’s 1,700-year-old Buddhist tradition. They also offer a much-needed chance to unplug and, perhaps – if you’re lucky – discover a bit of your “true self.”

The greatest temple in the Hoseo region

Beopjusa, or “Temple Where the Dharma Dwells,” was founded in 553 during the reign of King Jinheung (r. 540-576) of the Silla Kingdom (57 B.C.-A.D. 935). It would develop into the largest and most important Buddhist temple in the central Hoseo region, or what is known today as the Chungcheong-do provinces.

Even today, the temple remains an important and active center of Korean Buddhism. It is home to no less than 43 cultural properties, including the temple itself as well as the breathtaking Palsangjeon Hall, one of Korea’s few remaining wooden pagodas. Standing five stories and 22 meters high, the ornate structure cuts an impressive figure against the verdant hillsides and deep blue sky. 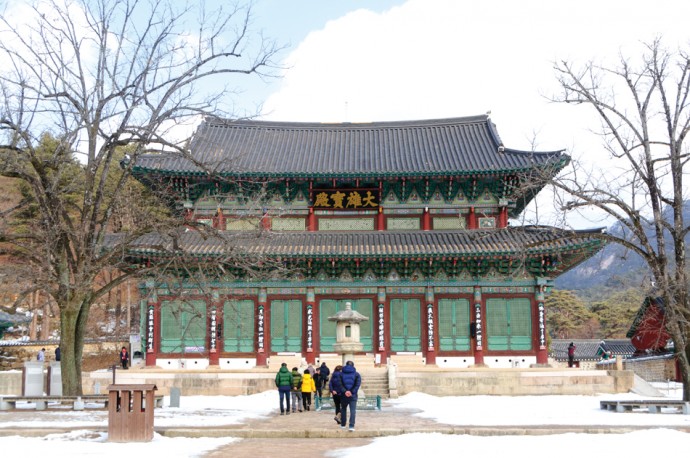 Beopjusa’s Templestay programs invite participants to come and gain a deeper appreciation for Buddhist culture than would ordinarily be possible with a simple visit. Thanks to the temple’s beautiful surroundings and the ease with which Seoulites can reach it – Beopjusa’s Templestay program is quite popular with local and international participants alike.

Most visits will begin like Beopjusa’s regular two-day Templestay, which commences at 2 PM with registration and basic orientation. Though the portion of orientation dedicated to Buddhist bowing is especially important, says the Ven. Bogwan, the nun in charge of the program, participants from other faiths shouldn’t worry too much – this isn’t about finding God, but rather about finding yourself. 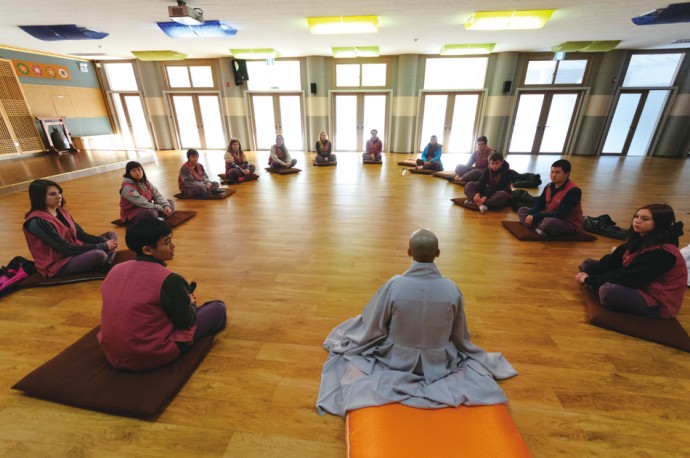 After a tour of the temple grounds, it’s time for dinner in the monks’ dining quarters. The temple meals are an integral part of Buddhist practice. In accordance with Buddhist precepts, the meals are completely vegetarian. You should be mindful as you eat – monks do not waste even a single grain of rice, nor should you.

Dinner is followed by the evening services in the main hall where the surreal sounds of the drum, bell and chanting will whisk you away to a more spiritual dimension before you partake in the centuries-old tradition of making of paper lanterns, which represent enlightenment and the wisdom of Buddhist teachings. The 9 PM bedtime allows you to enjoy one final “luxury” of temple life before you rest: the beautiful, almost tangible silence that falls over the monastery after nightfall.

Day two begins early at 3 AM. After arriving at the main hall in the pre-dawn darkness for morning services, your spiritually intensive day continues with some sitting mediation. While it may seem easy to “sit and do nothing,” few things are as difficult as attempting to truly clear one’s mind. As your thoughts calm and reflect the pristine environment around you, the sounds of the temple and Mt. Songnisan beyond become clearer and clearer, from the running water in the creek outside to the ring of the wind chime in the courtyard.

Participants are also expected to participate in the 108 bows, an intensive exercise in concentration and self-reflection. According to temple team leader Judy Kim, however, the most popular part of the program is the tea conversation with the temple’s abbot. Of course, there’s the beauty of the Korean tea ceremony itself, refined in its total unpretentiousness. But more importantly, the time serves as an opportunity for participants to have their questions about Korean Buddhism answered by a knowledgeable expert..

Overall, Beopjusa’s Templestay program is an unmatched opportunity to unwind. Kenzie Watson, an American university student who particpated in the program, said, “I would definitely recommend a Templestay to international participants; it was a tangible way to experience Korean Buddhism and some of traditional Korean culture, as well as a detox from the fast modern life most Westerners tend to live.”

FYI> For further information about booking Templestay, email beopjusa@gmail.com or call 043-544-5656. Information is also available at www.beopjusa.org (English and Korean)