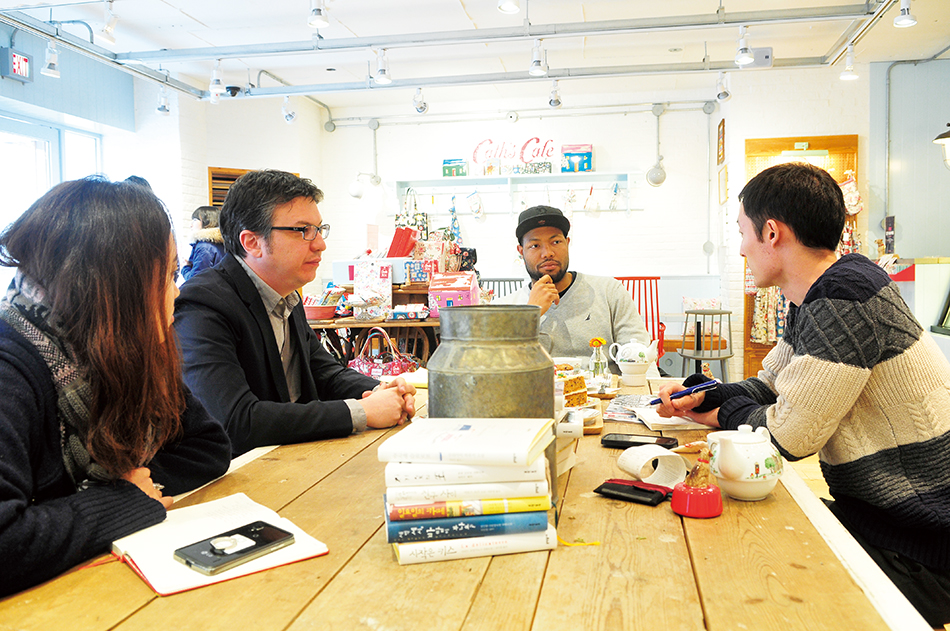 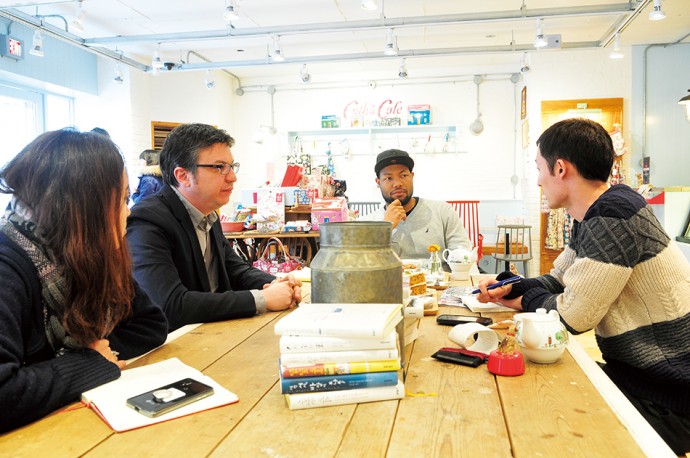 Seoul sits down to have the race discussion

[dropcap letter=”R”]acism is never an easy topic of discussion; tensions always run high. In the United States, the protests surrounding the trials of Michael Brown and Eric Garner have proven just how contentious and relevant race is in a nation where it’s a much older issue than it is in Korea. Perhaps the topic’s sensitivity explains why we didn’t receive as many willing participants this time – in fact, we only got two. Dave Hazzan, a freelance journalist from Canada, first arrived in Korea 13 years ago. Earlier this year, Groove Korea Magazine published an article Hazzan wrote titled “Korea’s Black Racism Epidemic” (Feb. 2014), a scathing but thoroughly researched exposé. Alex Turner, an American from Texas, arrived here as an English teacher but has since switched tracks to graduate school at Kyunghee University, where he studies international relations. Living in Korea for the past two years as a foreigner of color has given him a very personal perspective on having dark skin in Korea.

Do you think racism in Korea is different than that of other places, say, the U.S. or Canada?

Hazaan — While researching for my article, I found that racism in Korea mostly falls under three categories. The first is based on bloodline pride, which took root during Japanese colonialism as a form of resistance, and the discrimination based on that affects all foreigners equally. The second is anti-black racism, something mainly perpetuated by American media and a phenomenon that was largely born during the 1950s and ‘60s, sparked mostly by exposure to American troops. The third is a bit more complicated: the idea that Korea is now a successful nation and thereby needs to associate with “successful races” more than “unsuccessful ones,” meaning white people are viewed as successful while non-white races are viewed as unsuccessful.

Turner — Racism here is definitely different. It was immediately apparent once I started applying for jobs. Many ads say schools are only looking for white people, especially “white females”; I’ve even seen ads that specifically say they don’t want black people. At the same time, the racism doesn’t seem malicious; it’s not based on hatred. Koreans just have a very strict definition of being Korean, and anyone outside that is a foreigner. Most Korean prejudice seems based on misinformation and a lack of experience outside their cultural sphere. I’ve persuaded people here of the hurtfulness of their comments. I’ve met many Koreans who respond to my criticism, and they apologize or acknowledge their error. In the States, however, calling people on their racism almost never wins you points; I’ve actually lost friends that way.

Hazzan has interviewed people who were offered jobs that were then revoked once the employer realized the applicant was black. Turner has experienced such discrimination personally: An employer once expressed eagerness to hire him based on his credentials, but stopped answering his calls after he submitted his photograph – a week before he was supposed to start working. “They could have at least called me, and given me a little bit of respect,” he says. “It was probably awkward for the guy to tell me his boss didn’t want to hire a black man.” Hazzan says that many employers don’t specifically say “whites only” in their ads, but they tell the recruiters exactly that. 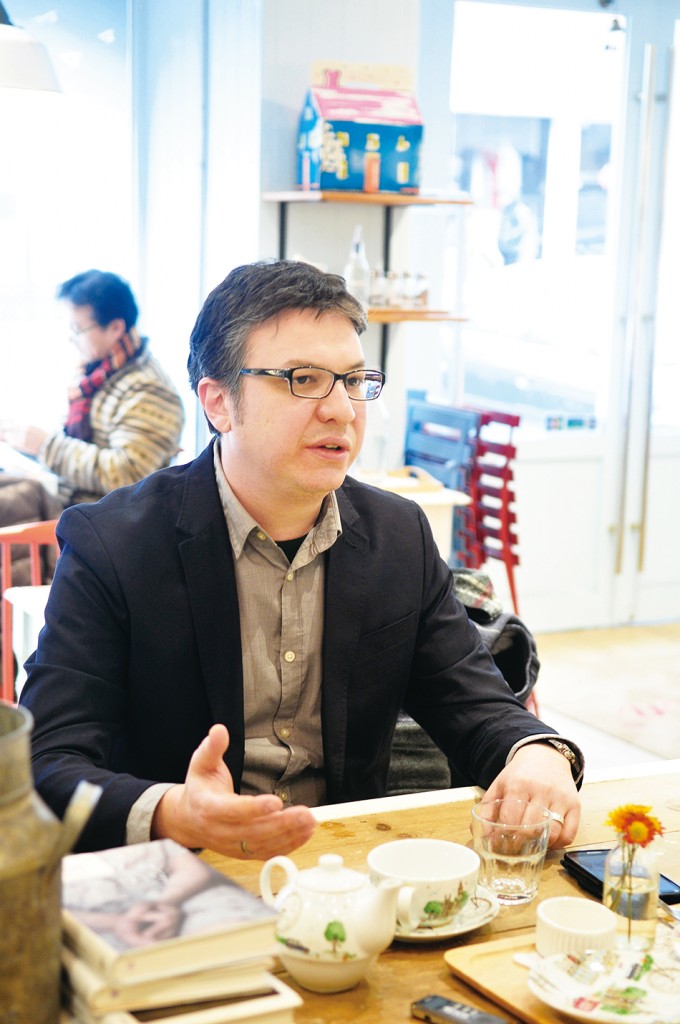 Hazzan — When I first came here, many schools didn’t want gyopos, Filipino-Canadians or any non-white teacher, even if they were qualified native speakers.

Turner — One recruiter actually told me in an email that a school wouldn’t hire me because of my race – which I actually appreciated. It was probably awkward for him.

Hazzan shares that many of his interviews revealed cases of Korean parents organizing to protest their children being taught by black teachers, often pressuring academies to cut black instructors from their staff.

So in that sense, is racism easier to spot in Korea?

Turner — Definitely. It’s not as malicious as it is back home, where I feel the racism is based on genuine hatred and prejudice. It’s hidden; you have to seek it out and shine the light on it. Whereas here, it’s blatant, slap-in-the-face racism: We’re hiring no blacks. It almost has that 1950s feel to it (laughs)!

Hazzan — The U.S. has been negotiating race since Columbus arrived in the Americas with the first slaves. It’s embedded in the system. Here, it’s a relatively new issue.

Do you think there is racism against white foreigners in Korea?

Hazzan — Extremely minimally. I was denied service at a restaurant once for being a foreigner; that happened once in 13 years. People say cabs don’t pick you up because you’re white, but it’s probably because drivers don’t want to translate. To be honest, there is actually an enormous amount of white privilege. As I mentioned before, whites are generally viewed as the “successful” race; companies openly prefer white candidates over non-white ones.

Turner — When I first got here, a few white co-workers complained that they experienced racism – to me! I asked them if they thought about what their comments might mean to someone like me, if they considered that what they experienced was just a taste of what people like me go through everyday – both here and in the U.S. There’s actually an organization of people of color living in Korea; there are thousands of us here. It’s called the Brothers and Sisters of South Korea.

Hazzan quickly adds that BSSK was one of his lifelines when he was researching for his article.

What about dating or marrying in Korea as a foreigner?

Hazzan — Granted, I will say if you get married to a Korean as a white person, then you go undergo some more prejudice – but I think you’ll have it a lot better than a black person would. Mostly, when you get married, it comes down to whether or not you’re Korean.

Turner — I don’t think – I know – that if you’re planning to date or marry a Korean as a black person, you’ll have a harder time than if you were white. 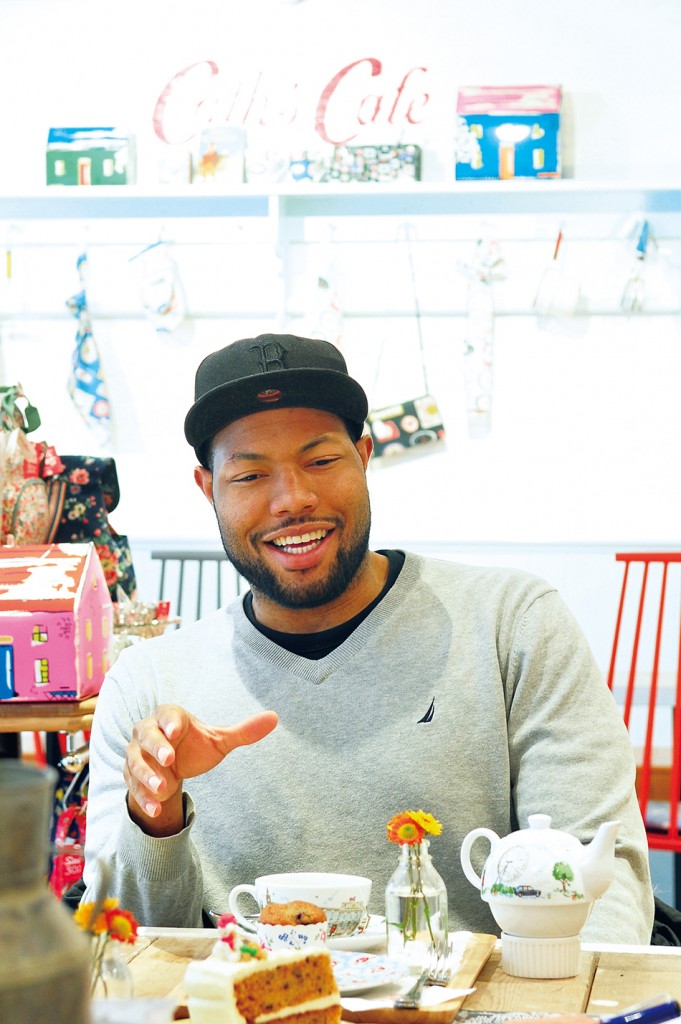 Our discussion nourishes a number of tangents, many of them too complicated and lengthy to transcribe here. Hazzan mentions the stereotype of the “dangerous black male,” an image often exacerbated by American media. Turner confides that one of the first questions people ask him is “Do you play basketball?” – at which point he has to disappoint his inquisitor by saying no. He’s also regularly asked if he can dance, sing or rap. Once, while teaching a class, students pointed excitedly at him while chanting, “Africa! Africa!”

The conversation then swerves to the experience of black Africans, compared to that of black Americans, with both panelists agreeing that the former are treated far worse.

Turner — I actually think that Africans, Southeast Asians and Indians have it far worse than I do.

Hazzan — I interviewed someone from Ghana. When he tells people he works in computer science it’s not uncommon for people to respond, “I didn’t know they had computers in Africa!”

As suggested by Turner, much of the racism in Korea seems to result from misinformation, carelessness or a lack of experience outside one’s cultural sphere. That being said, ignorance doesn’t excuse racial discrimination, and to pass it off as a simple cultural side-effect not only ignores the problem, but damages the global image that many Koreans seem to want for their nation.

Of course, Korea is certainly not the only place where racism exists, and progress is always an ongoing process, no matter how much things improve. Perhaps we can take hope from Turner’s experience in being able to persuade people that racist comments aren’t harmless. Slowly, but surely, we can all work to bridge gaps and heal wounds.