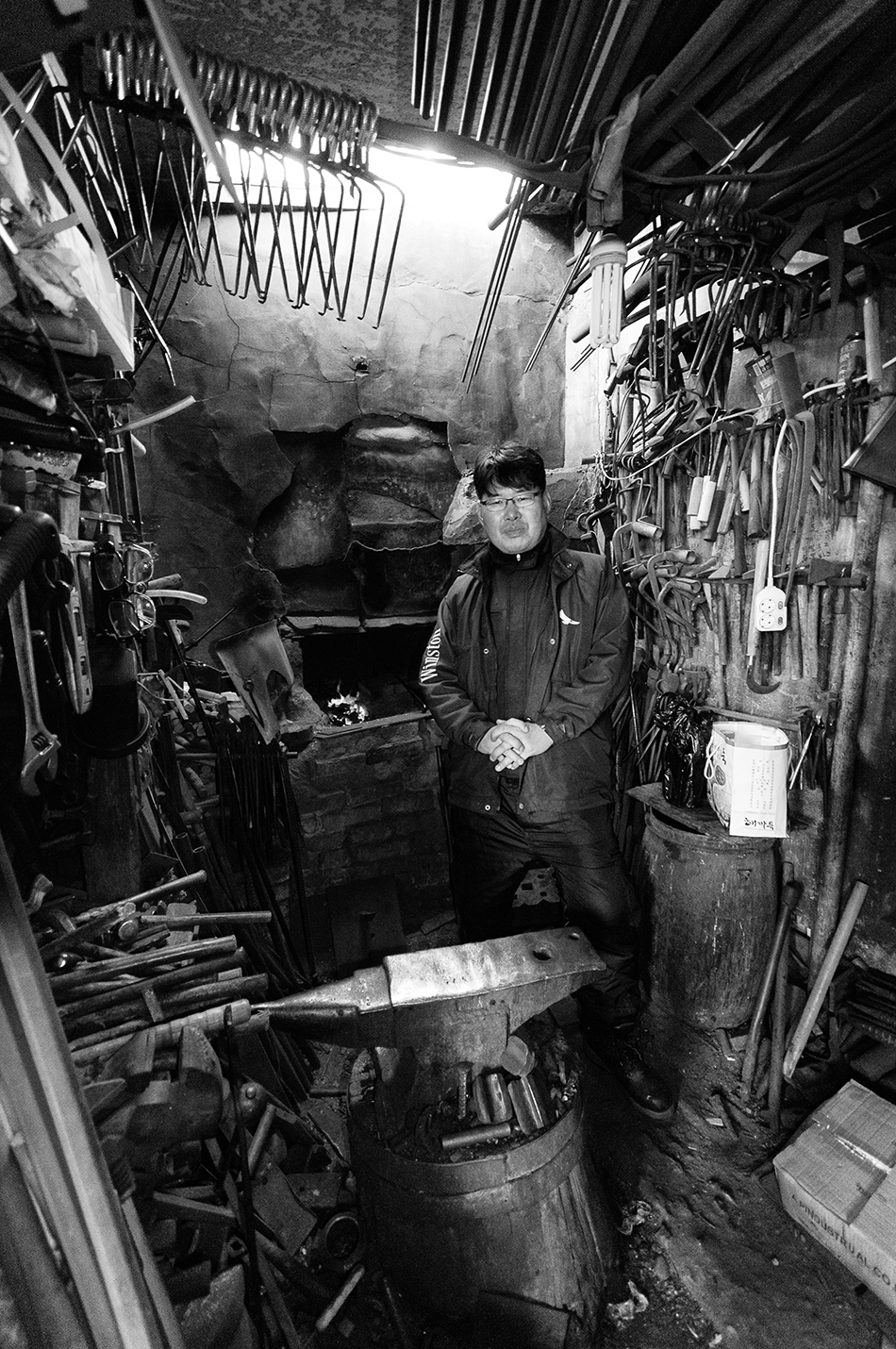 You’d think with machine-made tools available everywhere, neighborhood blacksmiths would have joined telegraph operators and papyrus manufacturers in the dustbin of history. But at Bulgwang Blacksmith, not only is old-time smithing surviving, it’s positively flourishing. “These days, these hoes are our most popular item. People use them when they dig up medicinal herbs on the mountain,” says Park Sang-bum, a second-generation blacksmith who still works with his father, Park Gyeong-won, who founded Bulgwang Blacksmith 60 years ago. The steady flow of customers who visit the junior Park at his hole-in-the-wall workshop in Seoul’s gritty northwestern district of Eunpyeong-gu suggests he won’t be at a loss for customers any time soon. “We rely on word of mouth,” he explains. “Rather than mass produce tools, we produce a quality product for a single customer and let him tell his friends about how good we are.”

Ducking into the cramped, narrow workshop of Bulgwang Blacksmith is to step six decades into the past. On the walls of the dark, blackened space – the only light is provided by a window in the ceiling that ventilates the room – hang a countless assortment of metal tools, all crafted by the masters themselves. Hammers, sickles, scythes, hoes … you name it, it’s there. In the center of the space is a well-used anvil and, on the far wall, a lit furnace. There’s a tiny room with a chair and heater in it where the elder Park takes a rest when it’s cold. Overall, the space has a very medieval feel; it wouldn’t be completely out of place on the film set of “Game of Thrones” (2011-). “We’ve tried to keep everything the way it was,” says Park. “The only concession we’ve made is the ceiling, which we replaced because it was leaking during the rainy season.”

For the elder Park, smithing was not initially a labor of love, but of survival. “During the Korean War,” the younger Park explains,“my father’s family fled their hometown of Cheorwon for Gyeonggi-do.” There he began learning the blacksmith trade in return for food. “When they returned to Cheorwon after the war, they found the entire place destroyed, town and all. So they came back to Seoul. That’s when he started doing blacksmith work for real.” While the elder Park didn’t initially intend to make a career of smithing, he had developed a talent for it, and during Korea’s developing years, when every neighborhood had a blacksmith, you could earn a decent living. Starting initially as a traveling smith, Park eventually set up shop in Eunpyeong-gu in 1965 when, as Seoul began to expand, the once remote countryside region began to fill up with people.

The younger Park, too, had other plans at first. He entertained ideas of being a police officer, but watching his mother, who at one time was assisting his father in the workshop, slave away at work that was physically exhausting even for men, led to a change of heart both for him and his father. “My father invited me in, gave me a glass of liquor and asked me to join him.” That was 30 years ago.

It’s not easy work. Conditions are cramped, the work physically demanding, and the weather can make things miserable. “It’s not bad in the spring and autumn,” says Park, “but when it’s summer and the furnace is on, it can be pretty bad.”

In terms of bulk, Park can’t even dream of matching the big factories’ output. But like any good artisan, Park makes up for a lack of quantity with a surplus of quality.

In terms of bulk, Park can’t even dream of matching the big factories’ output. But like any good artisan, Park makes up for a lack of quantity with a surplus of quality. “Machine-made tools, they are made with cheap metal and they wear out really quick,” says Park. “We use only the best metal from major Korean producers, so customers know that when they purchase one of our tools, they’ll be using it for decades.”

Quality begins at home, too. Park points at a hammer near the anvil. “That’s my father’s hammer,” he says. “He’s been using the same one for 30 years.”

Not only does Park build his tools to last, but he also builds them to spec. Customers come to him with differing needs that require differing tools. He produces 10 types of hand-hoes alone. “Some herbs and roots require a big blade, while other require a small blade,” he explains. His willingness to produce the right tool for the job from scratch goes a long way in explaining the shop’s continued popularity; he has regular customers who come to the shop from as far away as Pohang, on the southeastern shore of the country.

Because of the social, cultural and historical importance of the workshop, Seoul Metropolitan Government has designated Bulgwang Blacksmith a “future cultural heritage.” Park is now considering the future of his business. “I’ve been to Jejudo and seen they have a lot of museums” he says. “I’d like to turn the place into a museum, too, where visitors can experience blacksmithing.”

GO> The blacksmith is a short walk from Exit 6 of Bulgwang Station, Line 6.