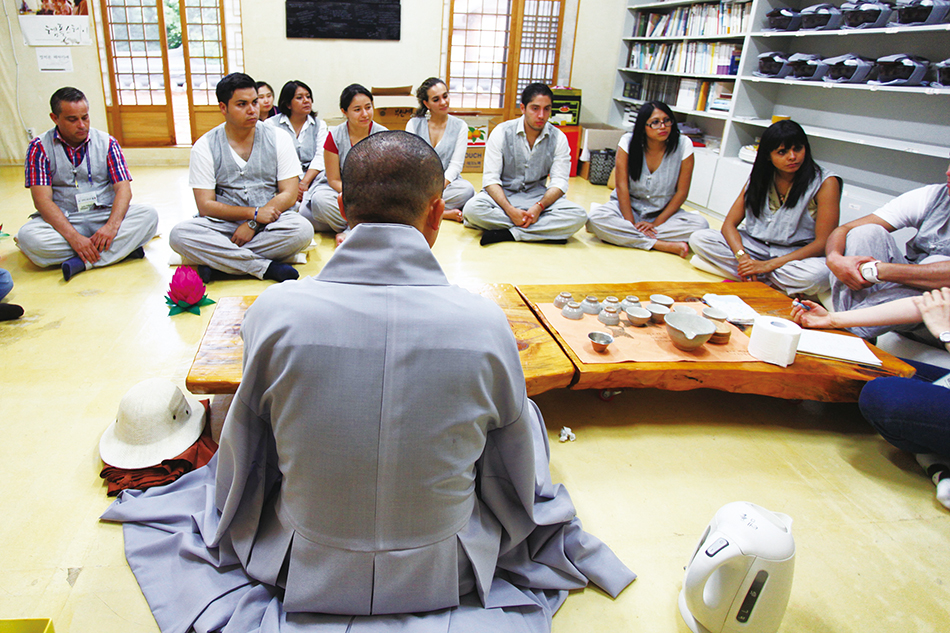 [box_light]Experiencing the Way of the Buddha

Written and photographed by Simon Bond

Hidden in the verdent forests and picturesque mountains of Byeonsanbando National Park in southwest Korea, Naesosa is not just one of Korea’s most beautiful Buddhist monasteries, but also a space of great warmth and serenity. This warmth is immediately apparent as I arrive to take part in the monastery’s Templestay program. I’m greeted by a monk, the Ven. Wonjung, who beckons me to share a cup of green tea with him.

Operated by the Jogye Order of Korean Buddhism, Korea’s largest Buddhist order, the Templestay program gives visitors an opportunity to experience, if only for a weekend, life as a Buddhist monk, and in so doing gain an appreciation of a 1,700-year-old Korean tradition. First-timers shouldn’t worry: there are plenty of people on hand to help, and the program offers an unparalleled opportunity to experience the culture in a deep, intimate way.

Ven. Wonjung takes the program participants on a tour of the monastery. Founded in 633, Naesosa is lauded as a gem of Korean traditional architecture, and is home to a number of important structures and works of Buddhist art. One of these is the temple’s 17th century main hall, the Daeungbojeong, which is praised for its masterful woodwork. Particularly noteworthy is the wooden latticework on the door, which features three different flowers in a criss-cross formation. Seated in the hall are three deities: the central Sakyamuni, Samantabhadra on the right, and Manjushri on the left. If you’re able to look behind these statues to the painting on the wall behind them you can make a wish—the tradition has it that if you walk along the passage maintaining eye contact with the painted depiction of Buddha, your wish will come true.

After the tour ends, we enter the temple’s dining hall to share a meal, Buddhist-style. Strictly vegetarian and highly nutritious, Korean Buddhist cuisine features plenty of fresh vegetables, many of them locally grown. Like everything else the monks do, eating—as well as meal prep and clean-up—is a form of meditative practice, and meals are usually taken in silence. Even if you’re not especially meditative, this time can be spent contemplating the bounty provided by Mother Nature. Monks are sure to finish every last grain of rice; you’d do well to emulate them.

The Sound of the Temple Drum

After the meal is finished we head outside again to the temple’s drum pavilion, where the great drum used to mark beginning of chanting and prayer sessions hangs. Ven. Wonjung is waiting for us at the pavilion. At 6:30 PM, as a monk announces the evening chant session by whacking furiously on the leather drum, Wonjung explains what we are seeing and hearing is a ritual that has been performed for centuries here. The sound of the drum is at once thrilling and soothing, and as the drumming comes to a conclusion, the temple bell begins to toll, its deep, almost tangible knell reverberating throughout the valley.

Wonjung invites us to take turns ringing the bell ourselves. This requires a great deal more than hitting the bell with something hard—you should swing the hammer back and forth six times before striking the bell.

As the last knell is sounded, we move to the temple’s main hall, where we join the monks in bowing to the Buddha. Bowing is an important piece of Buddhist practice, and earlier in the day we are given lessons on the correct way to bow, which involves full prostrations before the Buddha image. The evening session is relatively light, involving just 10 minutes of bowing, but in the morning, some chose to bow 108 times. The number 108 is sacred in Buddhism, as it represents the 108 defilements we must overcome to achieve enlightenment. The life of the Buddhist monk is not easy, and monks—and Templestay participants, of course—should wake up at 3:30 AM to participate in the morning yebul (Buddhist ceremony), which begins at 4 AM.

The day ends much as it began—with a cup of green tea. Ven. Wongjun leads a tea ceremony, a beautifully non-pretentious ritual that has been a tradition of Buddhist monks for centuries. The tea ceremony is a great way to learn more about the temple, as we ask Wonjung questions about his life there—and anything else that springs to mind.

FYI> The general admission fee for this temple is KRW 3,000. Those who wish to do a one-day temple stay will need to pay KRW 30,000. Overnight templestays are KRW 40,000. Trekking Templestays are held on weekends for KRW 60,000. Other options are also available on www.naesosa.org.