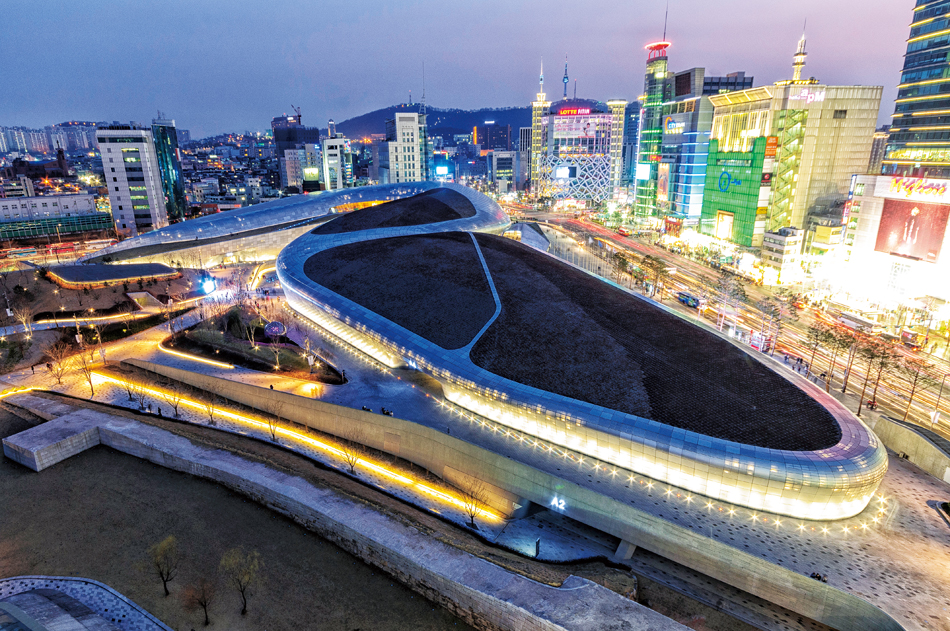 Say what you will, but Dongdaemun’s DDP is unlike anywhere you’ve been before

To call Dongdaemun Design Plaza (DDP) “controversial” would be something of an understatement.

Seoul’s newest landmark and cultural space has drawn the attention of the architecture world for its cutting-edge design and fluid landscape. While some praise it as a work of art, others condemn it as an overpriced blight on the Seoul skyline. Whatever you think of it, there’s certainly no place like it in the city. Not even close.

Originally conceived as a grand monument to design, the DDP is part culture and arts facility, part leisure space and part workshop. To mark its birth, the complex is hosting several fascinating exhibits and shows, most notably an exhibition of rarely seen national treasures from the collection of the Gansong Museum of Art. Even if you have no interest in the shows, the DDP is well worth the visit just to stroll amidst its winding, futuristic spaces.

The DDP is, above all else, eye-catching. Designed by British “starchitect” Zaha Hadid, the complex was designed as a “metonymic landscape,” a flowing, sculptural terrain integrating the cultural, historical and social elements of the Dongdaemun district, a gritty neighborhood known for its sprawling fashion and textile market.

The resulting structure has left polarized opinions in its wake. In the JoongAng Ilbo, respected Korean architect Mihn Hyun-jun, the man behind the beautiful National Museum of Modern and Contemporary Art, Seoul, called the plaza “the best architecture designed by Hadid,” praising the “perfect completeness” of the work. On the other hand, another Korean architect, who prefers to remain nameless, likened it to a “natural catastrophe.” Some observers compare it to a spaceship that has crash-landed in the middle of the city. Even Mayor Park Won-soon called it “an ugly sight,” criticizing how it clashed with the surrounding neighborhood.

The negative opinions reflect more than just taste. At USD 450 million, the complex is one of the most expensive buildings ever erected in Seoul. And to make way for it, historic Dongdaemun Stadium—the venue for much of Korea’s sports history—was demolished and flea market merchants were relocated.

Beneath the DDP’s curvy, silvery steel and concrete exterior is a bright, white world of twists and turns with nary a straight line, 90-degree angle or weight-supporting pillar anywhere. Truly mesmerizing, it’s something right out of a science fiction film. It’s a massive structure, too, with more floor space than the Louvre.

Broadly speaking, the DDP is divided into an Art Hall, Museum and Design Lab. There’s also a (mostly) outdoor public meeting place, the Oullim Square, and an attached park, Dongdaemun History & Culture Park. If you’re a fan of design, you could spend all day here, losing yourself in its many crooks and crannies. Architectural highlights include a fluid, almost Gaudi-esque staircase in the Museum and a so-called “Designed Dullegil,” a futuristic, 522 m walking path along an internal ramp way.

Many parts of the complex close around 9 or 10 PM, but the Oullim Square is open 24 hours a day. Some of the exhibit halls are closed on Mondays, too.

Gansong treasures and much, much more

The DDP celebrated its opening on March 23 by hosting several headline events, including Seoul Fashion Week. While Seoul Fashion Week has long since ended, some of the other exhibits are still running. The one you won’t want to miss is Gansong Culture: Protecting the Country with Culture (through Sep. 28, see p34), an exhibit of 91 works of Korean art from the collection of the Gansong Museum of Art. Included in the show are 24 works of Korean ceramics, 63 paintings and a copy of the Hunmin Jeongeum, the 15th century text explaining Korea’s indigenous script, Hangeul. The Gansong Museum of Art is notorious for holding just two exhibits a year (May and October), so this is your best opportunity to see some of Korea’s best loved cultural treasures. Admission is KRW 8,000.

Another ongoing exhibit is Enzo Mari Design (through June 21), a collection of 360 design works, workshop results and video by legendary Italian modernist designer Enzo Mari (admission is KRW 4,000). Also worth seeing is Zaha Hadid 360° (through May 31), an exhibit of 53 pieces of furniture, fashion and mobile art by the designer of the DDP herself (admission is KRW 4,000).

EAT> The DDP’s Design Market is home to numerous shops, cafés and restaurants. If you’re in the mood for something Korean, N Table does a mean Korean-style shabu shabu, or sliced beef boiled in water. Battery Park, meanwhile, serves good Italian cuisine and burgers in a delightfully urban setting. Equally impressive is Guarneri Tap House, where you can wash down quality pub grub with one or more of the 42 craft beers on the menu.