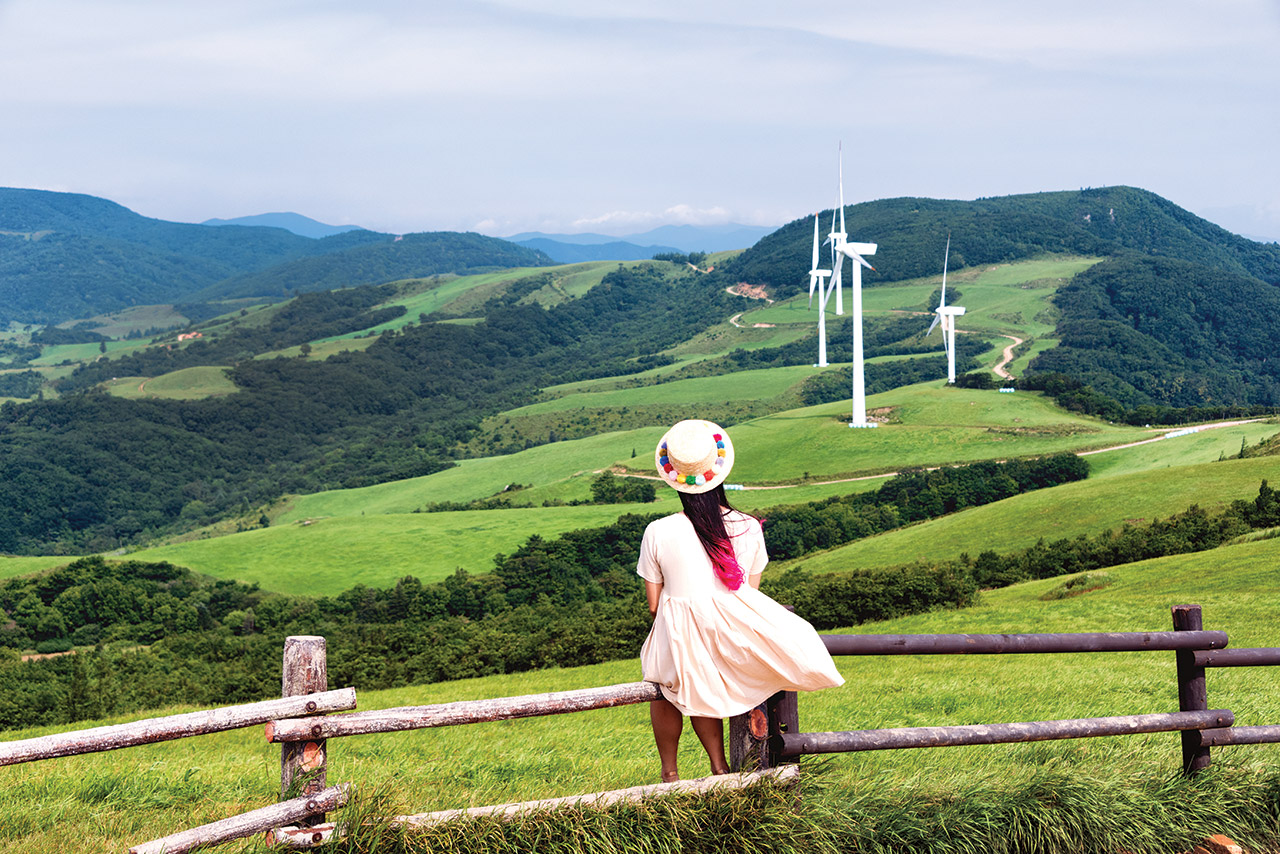 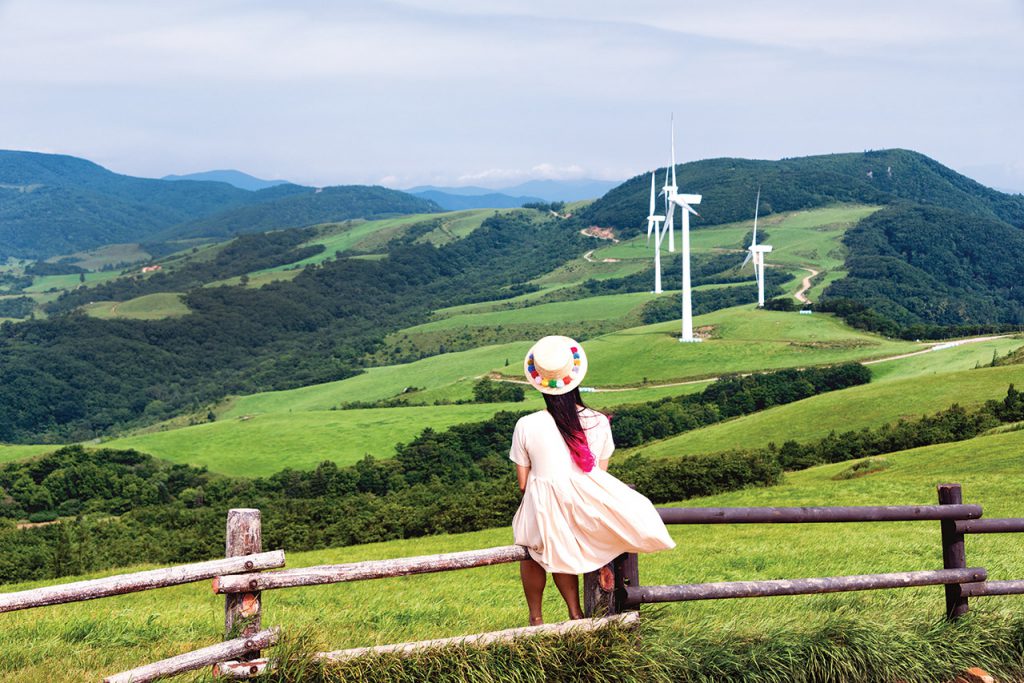 Buckwheat blooms and sheep roam on the roof of Korea

Depending on the weather, your state of mind and your powers of imagination, you could mistake it for the hills of Salzburg. Or the Scottish highlands.

Endless fields of grass cover the highlands of the Daegwallyeong like a rich green carpet, the undulating landscape punctuated by wind turbines soaring into the cobalt autumn sky, looming like giants on the roam, their long, fearsome blades spinning ferociously in the gusts blowing in from the sea, each rotation cleaving the air with a loud and very unnerving swoosh. On the horizon, itself a rare sight in a mountainous land, the aquamarine of the East Sea twinkles in the sun, the hue growing fainter until it gives way to the firmament. You zip up your jacket – the wind is bracing, invigorating. The temptation to run into the pastures and belt out show tunes, Julie Andrews-style, is strong. Signs warn visitors to stay out, however. “Grass is meat and milk.” 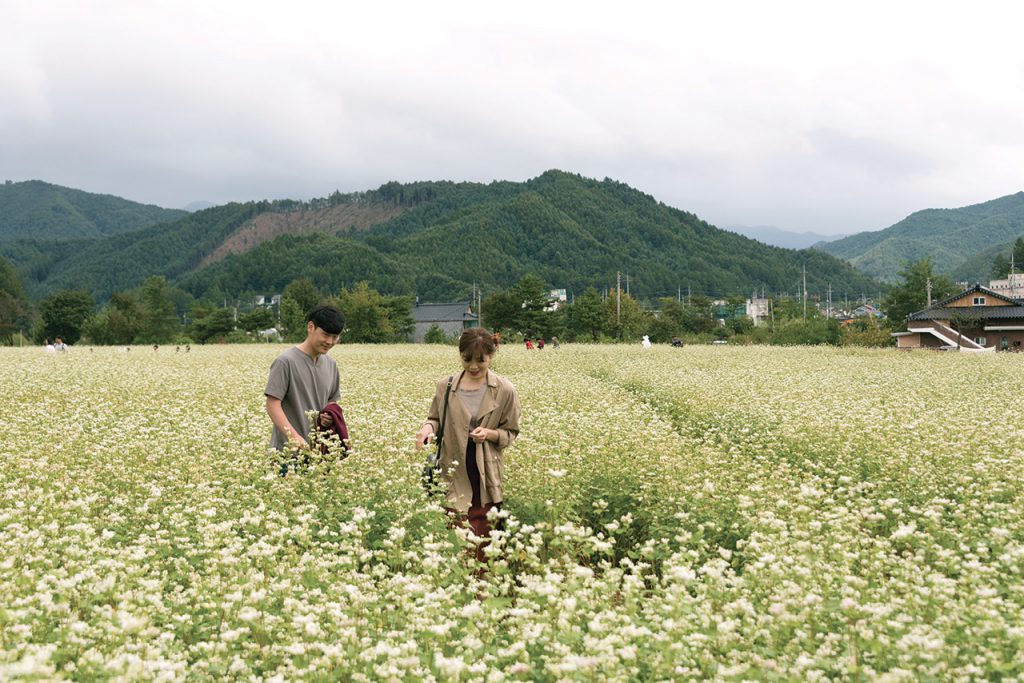 While beautiful, the Daegwallyeong is but one piece of Pyeongchang, the host of the PyeongChang 2018 Olympic and Paralympic Winter Games, which are set to kick off in February. Though the mountain town in the heart of the wild and rugged province of Gangwon-do is earning more attention nowadays because of the upcoming games, it remains an under-appreciated destination internationally, mention of its name eliciting the same blank stares as fellow Winter Olympic alumni Sochi, Nagano, Lillehammer and Lake Placid. Unknown or not, Pyeongchang is a rare combination of natural splendor, culinary delight and the warmth and hospitality so common in smaller mountain towns. And though the place may feel a world’s away from Seoul, it’s surprisingly accessible and getting even more so – it’s just two and half hours from Seoul by bus, and express train service, set to begin in November, will take you from Incheon International Airport to Pyeongchang in less than two hours.

The Daegwallyeong is the roof of Korea, a windswept plateau of spacious meadows, thick forests and, in winter, deep snow fields, a land so high it’s as if you could touch the sky. The landscape draws alpine comparisons, comparisons reflected in creative branding efforts selling it as the Alps of Korea or even, if the copywriter is thinking especially big, the Alps of Asia.

Strictly speaking, the Daegwallyeong is a high pass through the Taebaeksan Mountains, the range that runs down eastern Korea like a spine. It serves as the dividing line between the high mountains and plateaus of Gangwon-do’s Yeongseo region in the west and the coastal cities and lowlands of the Yeongdong region in the east. This role is reflected in the route’s name, which translates as “Great Gate Pass.” In the days of Joseon, scholars from the nearby city of Gangneung transversed the pass on their way to Seoul, and visa versa. 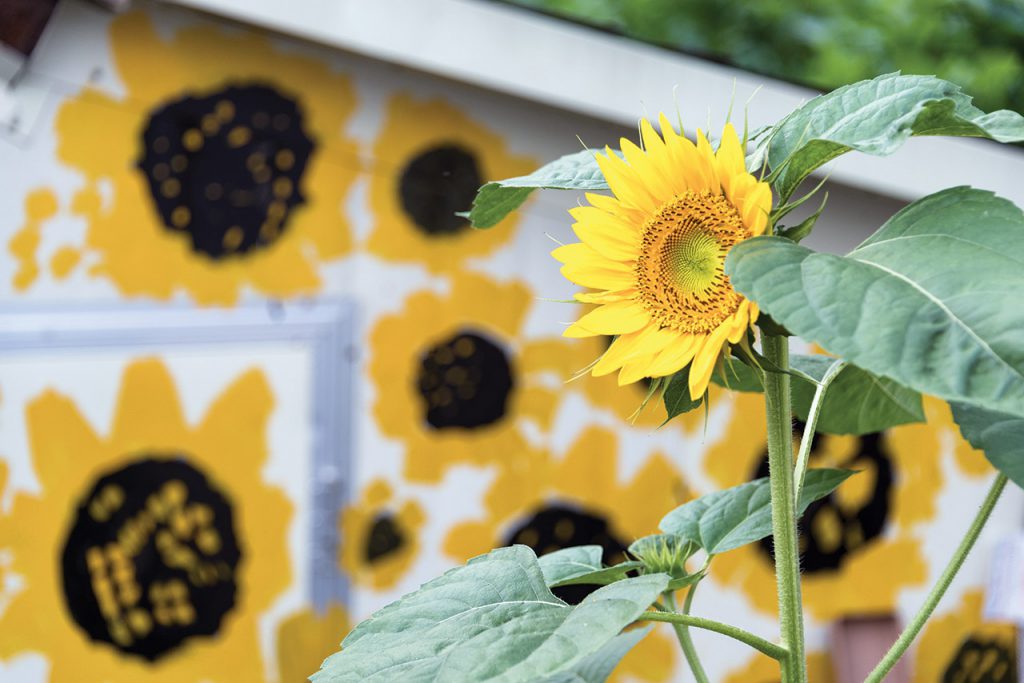 The completion in 1975 of the Yeongdong Expressway linking Seoul and Gangneung strengthened the Daegwallyeong’s importance as a gateway. It also opened up the region to development. Eager to bolster Korea’s milk and meat production to feed a growing and hungry population, the government promoted the development of industrial-scale ranches in the highlands flanking the pass. The ranches, still in operation, not only produce high-quality beef and dairy products, but are also some of the province’s most popular tourist destinations.

The largest and arguably the most scenic of the ranches is the massive Samyang Ranch, also known as Eco Green Campus. The 20-square-kilometer ranch, sprawling across hillsides between 850 and 1,400 meters above sea level, is the largest pasture in Asia, a boast made all the more incredible when you consider that when it was founded in 1972, the hills were covered in rocky scrub devoid of grass. The Samyang Corporation, a major producer of foodstuffs such as milk and instant noodles, operates the ranch, which is home to about 900 heads of cattle. The ranch accepts paying tourists, too – tour buses will take you to the top of the pasture, a 1,140 meter point called the East Sea Observatory, so named for its view of said sea. You could take a bus back down if you like, but descending on foot, following the 4.5 kilometer trail past wind turbines, scenic lookouts, romantic trees and plenty of cows and sheep, is much more rewarding. Be sure to try the ice cream at the shop near the entrance – it’s lovely.

Sky Ranch, founded by Hanil Cement in 1974, is another major ranch. Home to 500 dairy and meat cows, the scenic pasture was jealously kept off-limits to the public until 2014. Unsatisfied lugging tourists around on a mere bus, Sky Ranch pulls wagons full of visitors to the top of the pasture with a tractor. Real adventurers can explore the park on horseback, too. 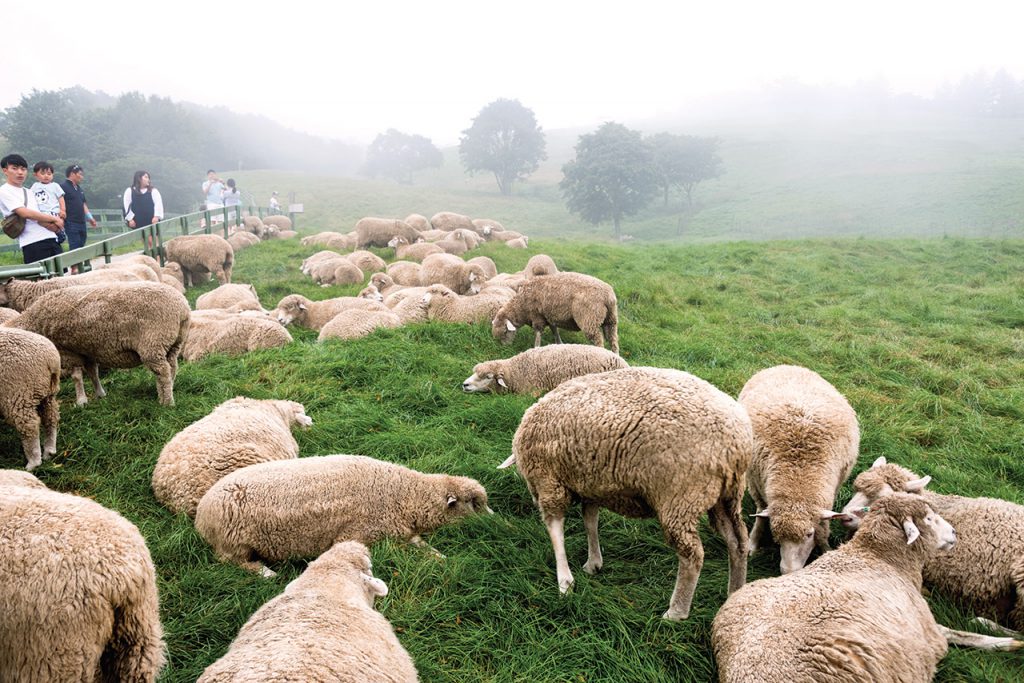 Smaller, but very popular, is Daegwallyeong Sheep Farm, a picturesque meadow that some 200 heads of sheep proverbially call home. The ranch, with its rolling hills and rustic wooden sheds, is a frequent backdrop in TV shows and commercials. The views from the hills are worth the uphill walk. You can feed the sheep, too, making it a perfect family destination.

Near Daegwallyeong Sheep Farm is the head of the trail to the Seonjaryeong Ridge. A five-kilometer hike takes you to the top of the ridge, which offers breathtaking views over the mountains and plateaus of eastern Korea. It’s an easy hike, although it does get more difficult in winter, when you can find yourself hiking up to your waist in snow.

Another highland area, albeit of a very different kind, is Mt. Odaesan, the centerpiece of Odaesan National Park. The highlight of the park is the beautiful Buddhist monastery of Woljeongsa. The temple is surrounded by thick forests, including old fir trees that line the trail to the complex. Like the Daegwallyeong, the Odaesan area gets a lot of snow in winter. 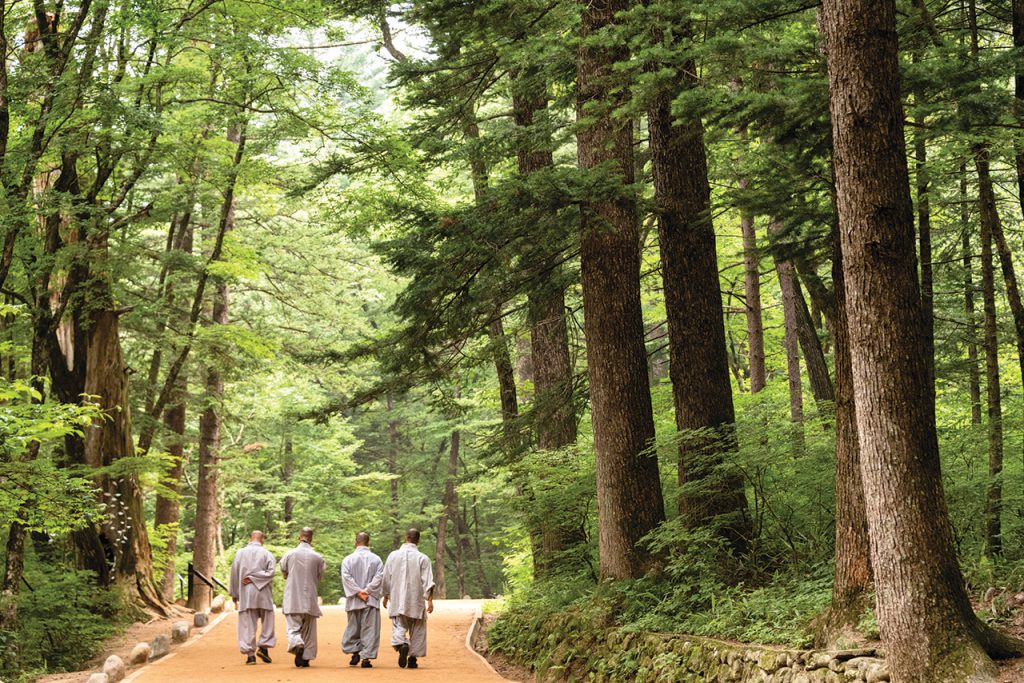 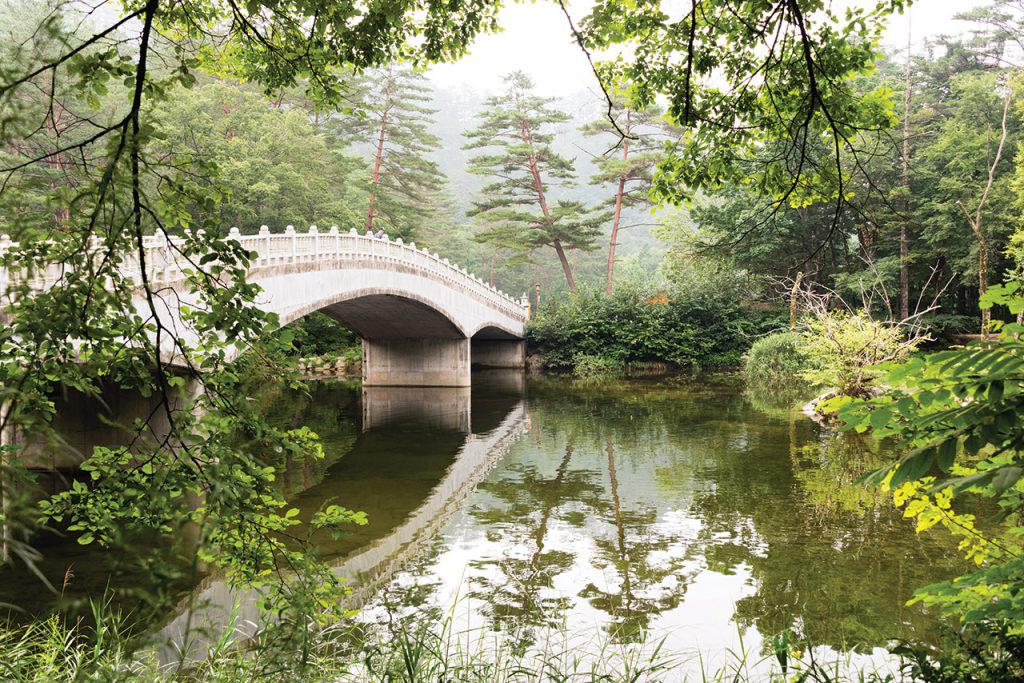 The burgeoning flowers of the buckwheat, growing thick in the surrounding fields, looked to be a profusion of sprinkled, white salt on the terrain. These surroundings under the warm moonlight felt extremely gratifying and suffocating.

The hamlet of Bongpyeong, a short detour off the Yeongdong Expressway, is a pleasant farming community best known for its high quality buckwheat, or memil. The hardy plant, well suited to Gangwon-do’s poor soil and short growing season, features prominently in the province’s cuisine. Chilled buckwheat noodles, or makguksu, are ubiquitous in the region. Another local favorite is memil jeonbyeong, a dish of buckwheat crepes filled with kimchi and bean curd. Restaurants and stalls serving these dishes line the streets of Bongpyeong, especially around the newly renovated Bongpyeong Market, where you can find a wide range of buckwheat-related products, included dried noodles and teas. 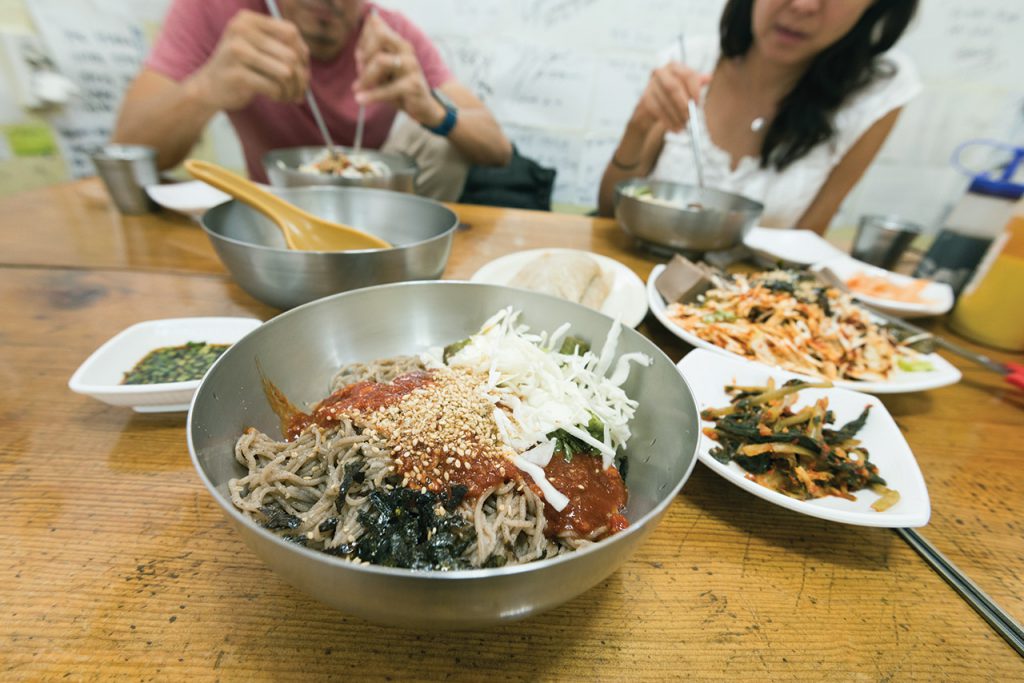 Bongpyeong’s biggest tourist draw, however, is its buckwheat fields. Located across the stream from downtown Bongpyeong, Lee Hyo-seok Culture Village is a bucolic community and the hometown of 20thth century author Lee Hyo-seok, for whom the place is named. In early September, the village’s endless fields of buckwheat become a beautiful sea of white when the buckwheat flowers bloom, the blossoms gently swaying in the wind as if they were dancing. Little has changed about the fields since Lee wrote about them in his 1936 short story, “The Buckwheat Season,” save, perhaps, for the countless couples strolling through the flowers, their heads visible above the blossoms, arms extended, smartphone cameras in selfie mode, Instagram account at the ready.

STAY> Thanks to the upcoming Olympics, the accommodation scene in Pyeongchang is improving. Nevertheless, the best appointed places are still the hotels at Alpensia Ski Resort, one of the main venues for the Olympic games. If you’re looking for something more reasonable, try one of the handful of motels in Hoenggye, the pleasant little town that serves as the administrative center and transportation hub of the Daegwallyeong region.

EAT> When in Bongpyeong, try the makguksu and jeonbyeong. The Hyundai Sikdang near Bongpyeong Market does excellent versions of both, but do try to get there early – it’s a popular spot and can fill up quickly.

Another favorite is pork belly and squid, or osam bulgogi, pan fried in a tangy sauce. Doam Sikdang, overlooking the main rotary in Hoenggye, has been doing this dish for decades. 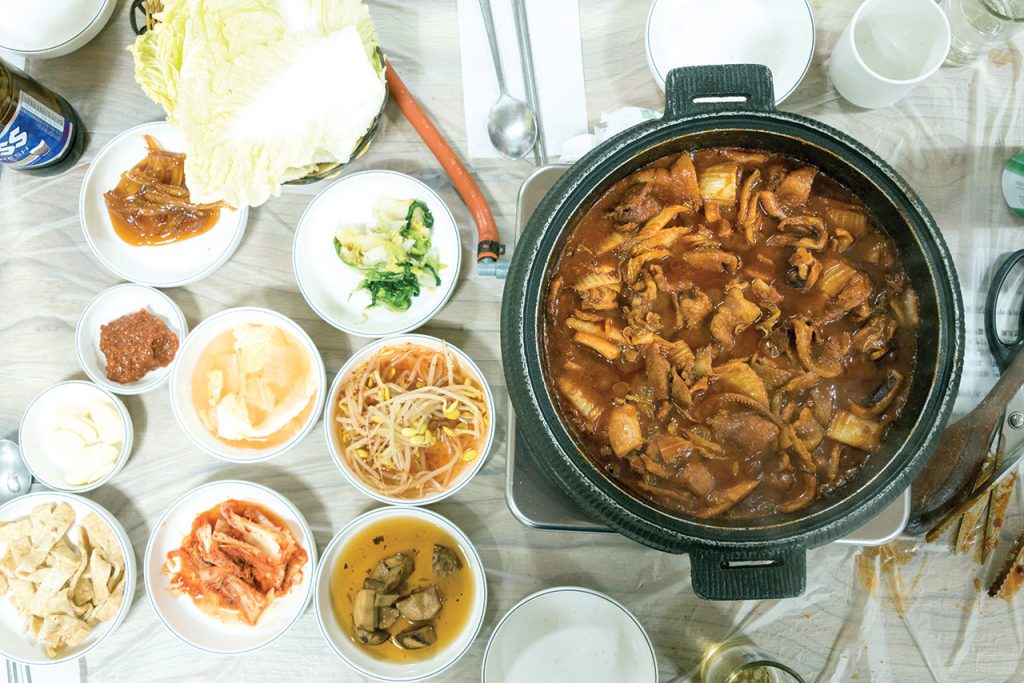 In winter, locals freeze dry pollack on huge outdoor racks in the snow. Pollack soup, or hwangtaeguk, and grilled pollack, or hwangtae guui, are local specialties.

GO> From Seoul’s Dong Seoul Bus Terminal, there are frequent buses to Gangneung that stop at Pyeongchang’s traffic hubs of Jangpyeong (for Bongpyeong) and Hoenggye (for the Daegwallyeong).

Seoul Gets Its Spook On