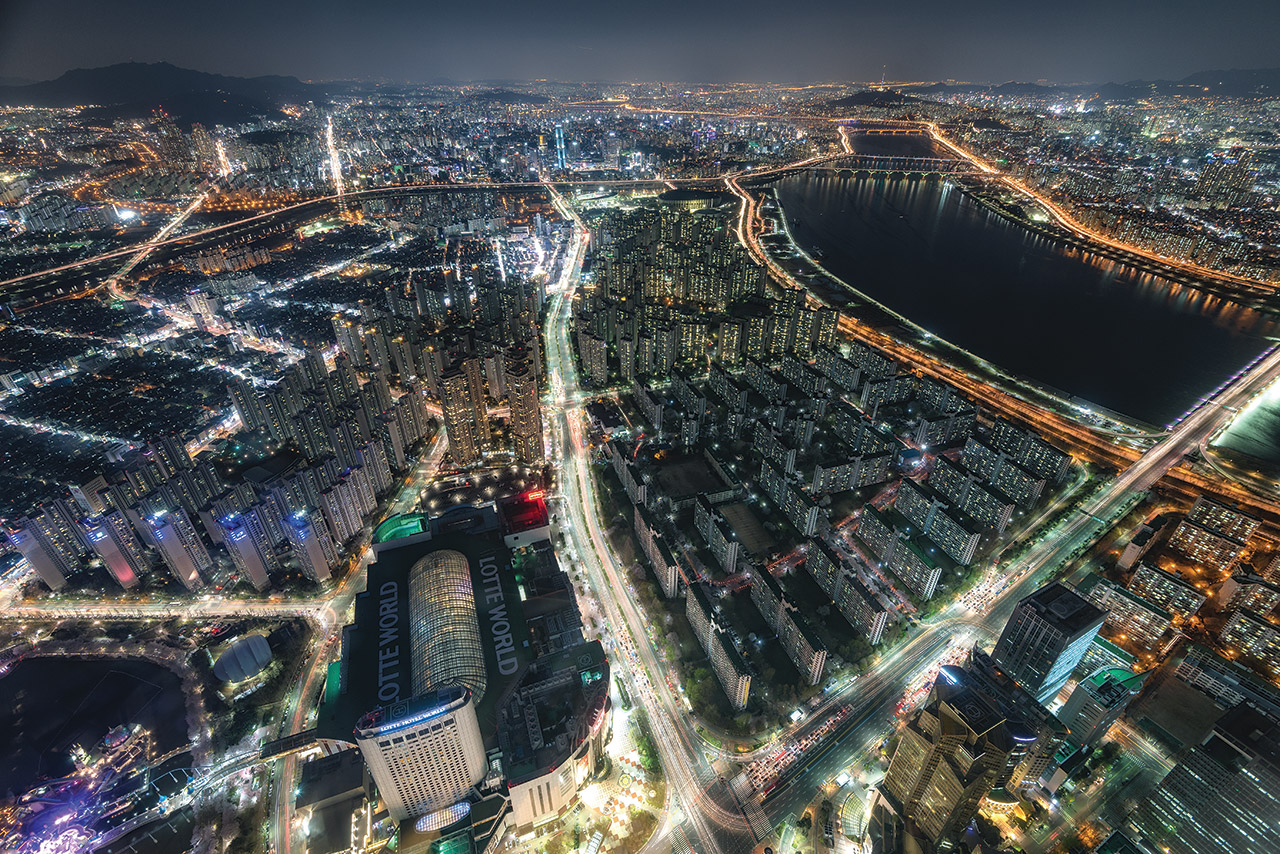 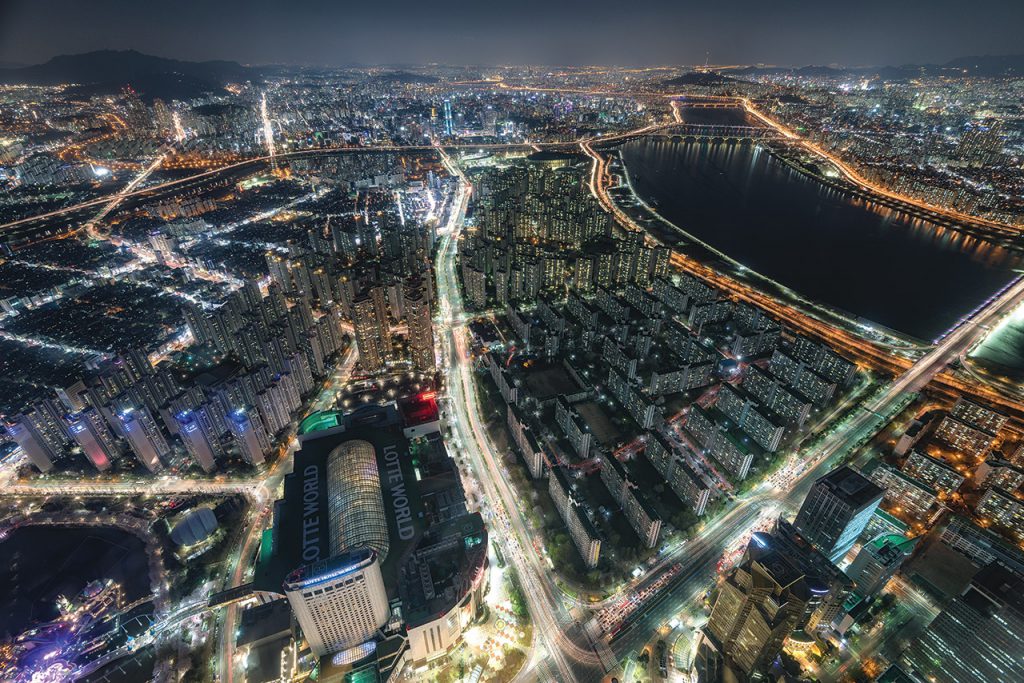 The Lotte World Tower is more than an architectural landmark. It’s a city unto itself.

Step out of Jamsil Subway Station, and your eyes are immediately drawn skyward. The Lotte World Tower, Seoul’s newest architectural landmark, officially opened to the public on April 3. The 123-story skyscraper, which took seven years and cost US$3.6 billion to erect, has transformed the cityscape of southeastern Seoul. The world’s fifth-tallest building has already set three international records: fastest elevator, highest glass-bottomed observation deck and highest swimming pool in a building.

While the views from the tower’s observation deck alone justify the subway ride, the skyscraper isn’t the only reason to come to this corner of the Jamsil district. The Lotte Group, one of Korea’s largest conglomerates, has turned the scenic Seokchon Lake area into a massive shopping and entertainment complex. The truly multi-functional space includes a new mall, one of Korea’s largest aquariums, a department store, a hotel, a performing arts center and, of course, one of the world’s most popular theme parks. It’s practically a city unto itself, one so fun you could waste an entire day here and not even notice. 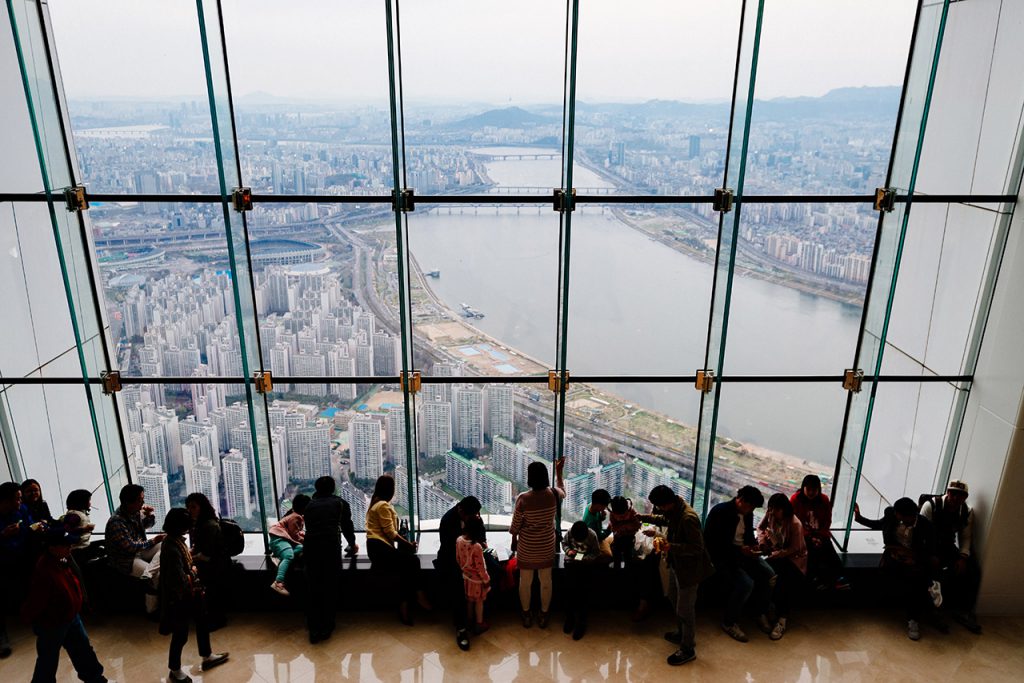 Over 40,000 people attended the Lotte World Tower Fireworks Festival on April 2. The show marked the opening of Lotte World Tower and commemorated the 50th anniversary of the Lotte Group. The grand spectacle, which cost KRW 4 million, lit up the skies over Seoul with over 30,000 fireworks, marking a new beginning for the corporation.

Designed by the renowned American architectural firm Kohn Pedersen Fox, the 123-story Lotte World Tower is Korea’s tallest building and the fifth-tallest in the world at 555 meters. The supertall skyscraper embodies the concept of “Korea’s beauty and pride” with a design that incorporates the lines of traditional ceramics and calligraphy.  The building beautifully captures the color of Seoul as the sun sets and seasons change. 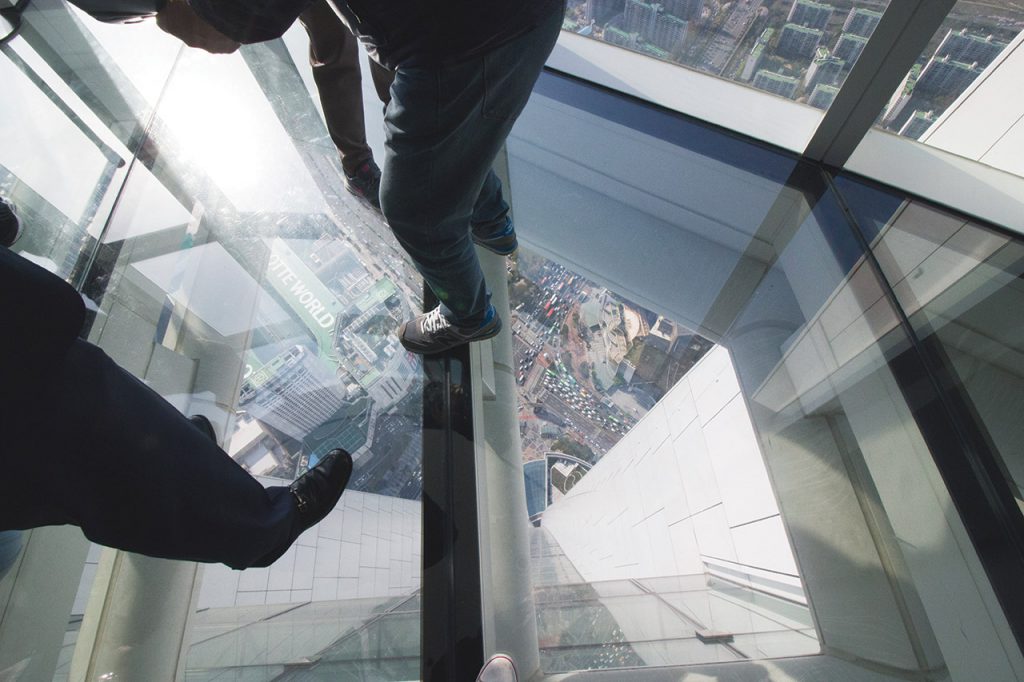 For visitors, the highlight of the tower is Seoul Sky, a multi-deck observatory that occupies the very top of the building. Seoul Sky includes an indoor observatory, an outdoor observatory and some vertigo-inducing glass-bottomed decks reminiscent of Chicago’s Willis Tower. The vistas over the city are breathtaking, especially at night. On a clear day, you can see all the way to North Korea. There’s even a lounge on the top floor where you can enjoy the view over a coffee or cocktail, a one-of-a-kind experience.

To get to Seoul Sky, visitors should pass through a dazzling multi-media exhibition called “Pride of Korea” before boarding the Sky Shuttle, the world’s fastest elevator. The double-deck elevator takes you to the top in only a minute, entertaining you along the way with an animation of Seoul’s skyline. 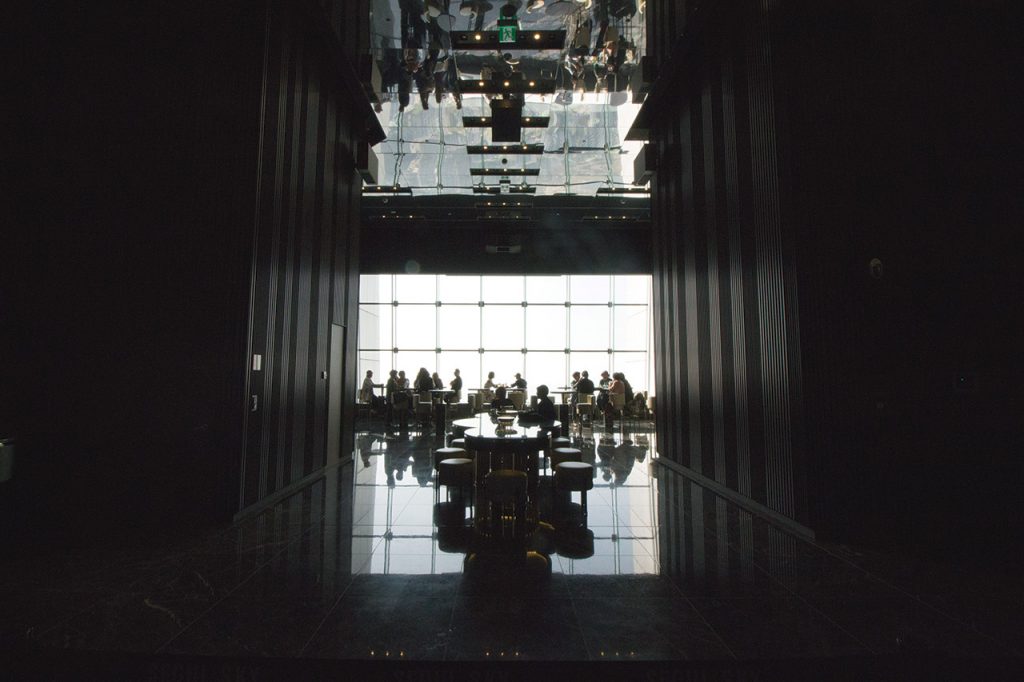 At Lotte World Tower’s base is the 10-story Lotte Mall, which opened in 2014. This tribute to conspicuous consumption is home to a department store, duty-free shop, a luxury goods emporium, concert hall, multiplex theater, supermarket and aquarium, among other things.  The aquarium is an especially good place to  enjoy a slower-paced experience away from the crowds. Its drawing cards include Korea’s longest water tank and its longest underwater tunnel, although the real star here is the beluga whale.

Across the street from the mall is the older Lotte Department Store, the Lotte Hotel World and, of course, Lotte World, the popular amusement park. Lotte World attracts over 7.3 million visitors a year. The park is divided into two zones, an indoor theme park called Lotte World Adventure and a Disney World-esque outdoor one called Magic Island. Lotte World Adventure is, in fact, the world’s largest indoor theme park, boasting games, rides and Korea’s biggest ice skating rink, all beneath a beautiful glass dome through which natural light pours. 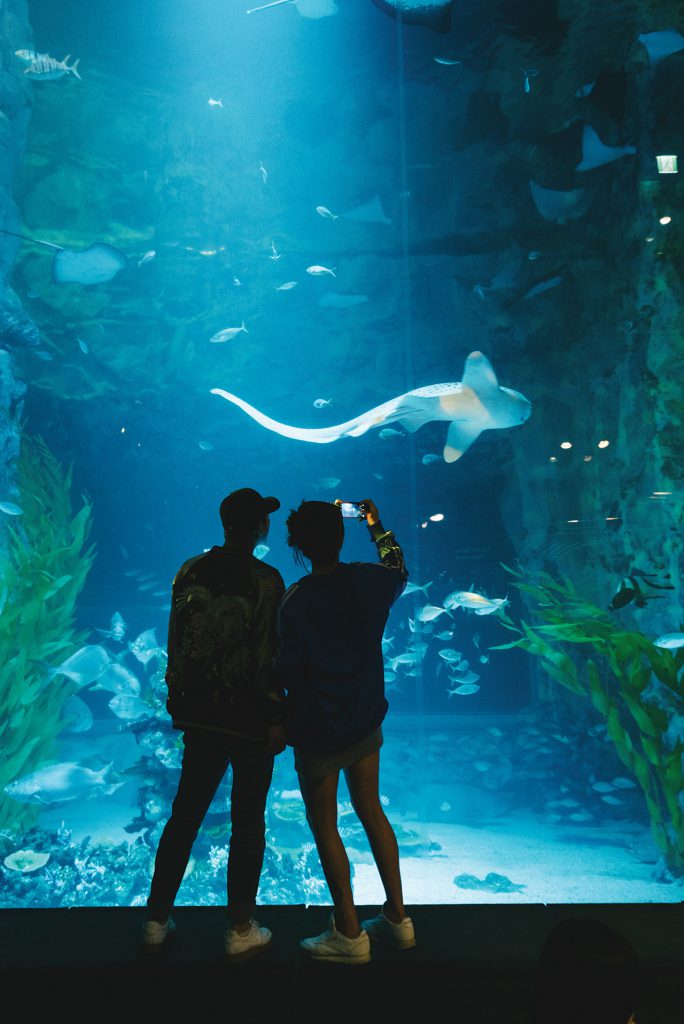 You can also catch a musical show at the Charlotte Theater, Korea’s first-ever and largest musical theater. The indoor folk museum, which features folk objects and even miniatures of palaces and traditional homes, is another spot that is especially popular with international visitors.

Lotte’s entertainment city sits on Seokchon Lake, a popular leisure spot that is often crowded with families, couples and friends. Originally part of the Hangang River, the lake took its present form in the 1970s, when land reclamation separated it from the river. The lake is actually two lakes. The East Lake, the relatively more natural of the two, is popular with local walkers and joggers. The West Lake, where Lotte World’s Magic Island is located, is busier and more festive.

In early spring, visitors from all over descend on the West Lake to take in the beautiful cherry blossoms that line the lake. The Lotte Group and the local government have joined hands to bring a bit of pop art pizazz, too. Dutch artist Florentijn Hofman, of Rubber Duck fame, brought a whole family of swans to the lake with his “Sweet Swan” project. The display has proven extremely popular, drawing over 3.2 million visitors in 18 days after it opened on April 1. The swans have been so popular with the Instagram crowd that sales at surrounding restaurants and cafés have jumped by over 20 percent. The many popular restaurants by the water make for great evening dates or family outings, too. 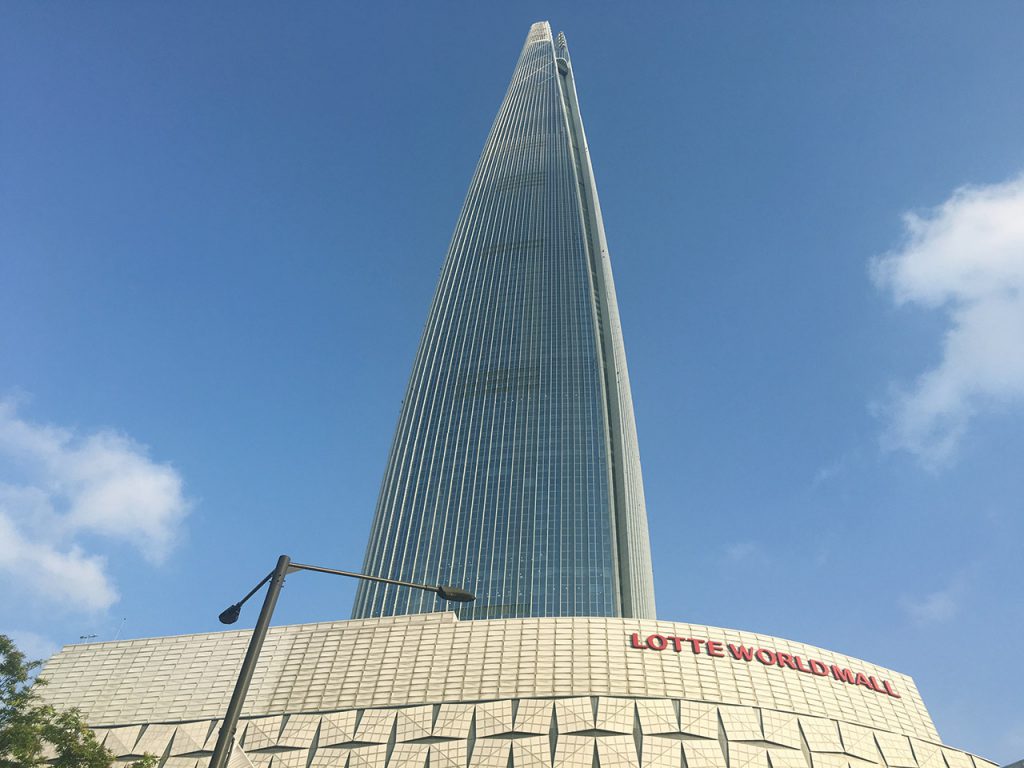