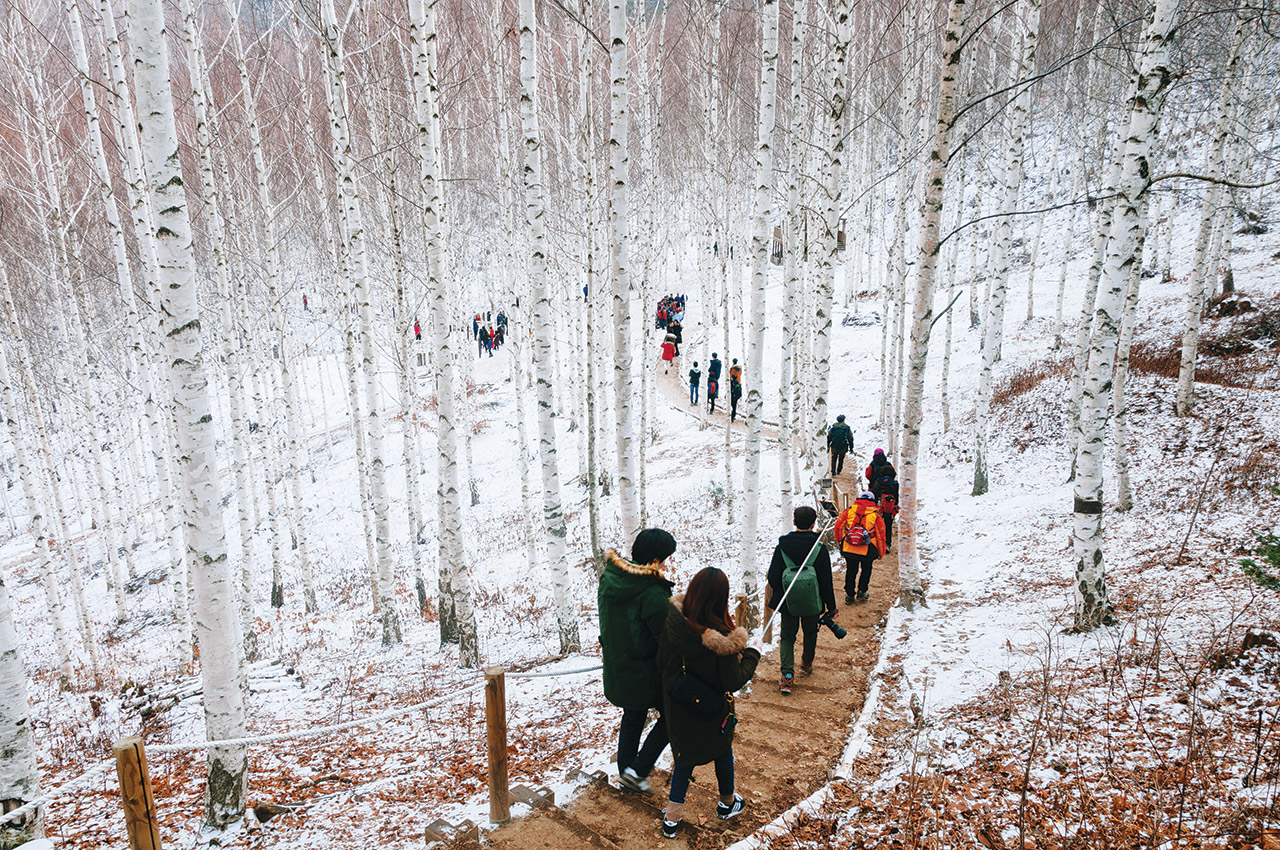 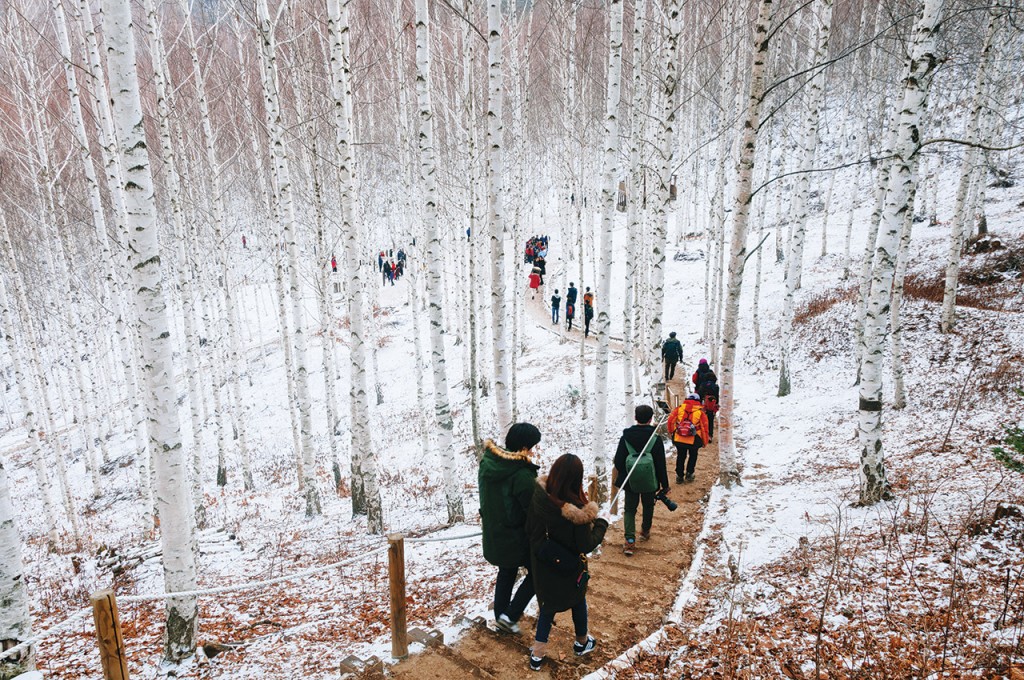 Birch trees have mystical power that can awe, heal or inspire. In Celtic lands, they are a symbol of renewal, rebirth and purification; the Scots and Irish associated them with the otherworld, fairies and the dead returning from the grave. Samuel Taylor Coleridge called it “the most beautiful of forest trees – the lady of the woods.” Boris Pasternack found inspiration in the endless forests of birch that surrounded the dacha where he wrote “Doctor Zhivago.” In “Visit to a Birch Grove,” Ko Un, arguably Korea’s greatest living poet, wrote:

Before I reached Chilhyeon Mountain on my way from Gwanghyewon one February,
I found myself approaching a broad valley thick with white birch trees.
Someone said: Go on! and gave me a push in the back.
I turned to see who it was. There was no one there. But look!
How honestly the cast-off boles of the white birch grove confront the world!
They are altogether indifferent to the distant hills that are fully accustomed to snow.
The winter trees alone know nothing of depravity.
(Translation by Brother Anthony of Taizé, anthony.sogang.ac.kr) 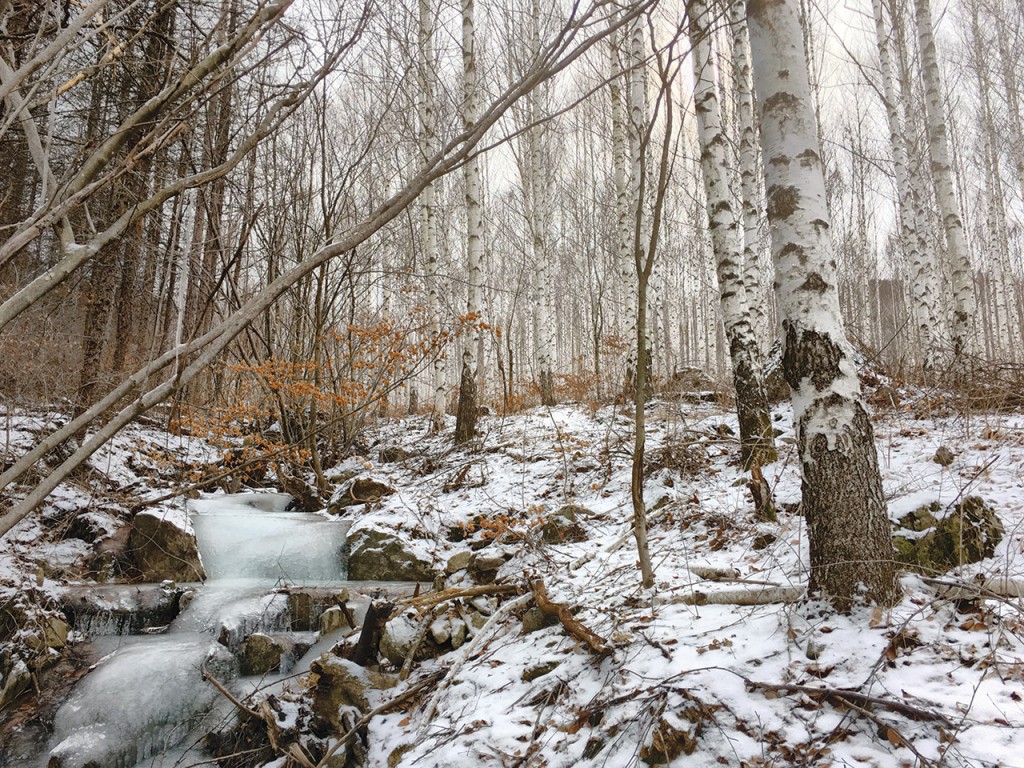 About 20 kilometers outside of the small mountain town of Inje, there is a hill overlooking one of the many valleys in the rugged province of Gangwon-do, where the ridge lines seemingly continue infinitely into the distance. Topographically, it is rather unremarkable, just another mountain in a region where mountains are like sands at the beach. What makes it special, however, is what grows on it – thick forests of birch trees, a monochromatic landscape where the wind whispers as it blows through the endless colonnade of black and white.

Healing in the winter’s forest

The Wondae-ri Birch Forest, as it is called, is comprised of about 690,000 birch trees clustered together on 138 hectares of mountainside. Of this, 25 hectares are open to the public. 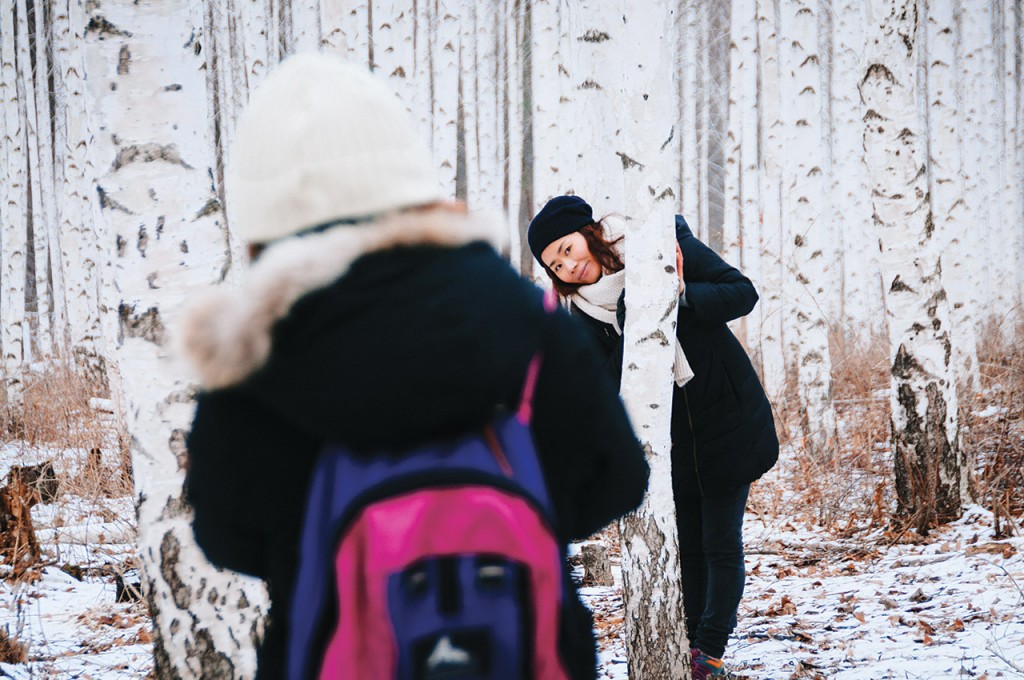 Birch trees are native to the colder northern regions of Korea; North Korea’s Mt. Baekdusan and the Gaema Plateau are reportedly thick with the trees. Wondae-ri’s forest is of relatively recent vintage, however, the trees having been planted in the early 1990s to replace an earlier pine forest that had been cut down after contracting pine wilt disease. The rugged landscape proved perfect for the hardy tree, a pioneer species known to “colonize” cold, barren terrain. Today it is the largest birch forest south of the DMZ.

Not so long ago, you could visit the forest and reasonably expect to find something approximating solitude. This is no longer the case. Through TV, newspapers, magazines, blogs and social media, word has gotten out about the place, which is now a popular destination for those seeking physical and spiritual renewal – or “healing” – in nature’s warm embrace after an exhausting week of competition, struggle and stress.

The forest is especially popular in winter, when people come from all over Korea to see the exotic, Siberian landscape of white trees thrusting out of the white ground toward the deep blue sky. 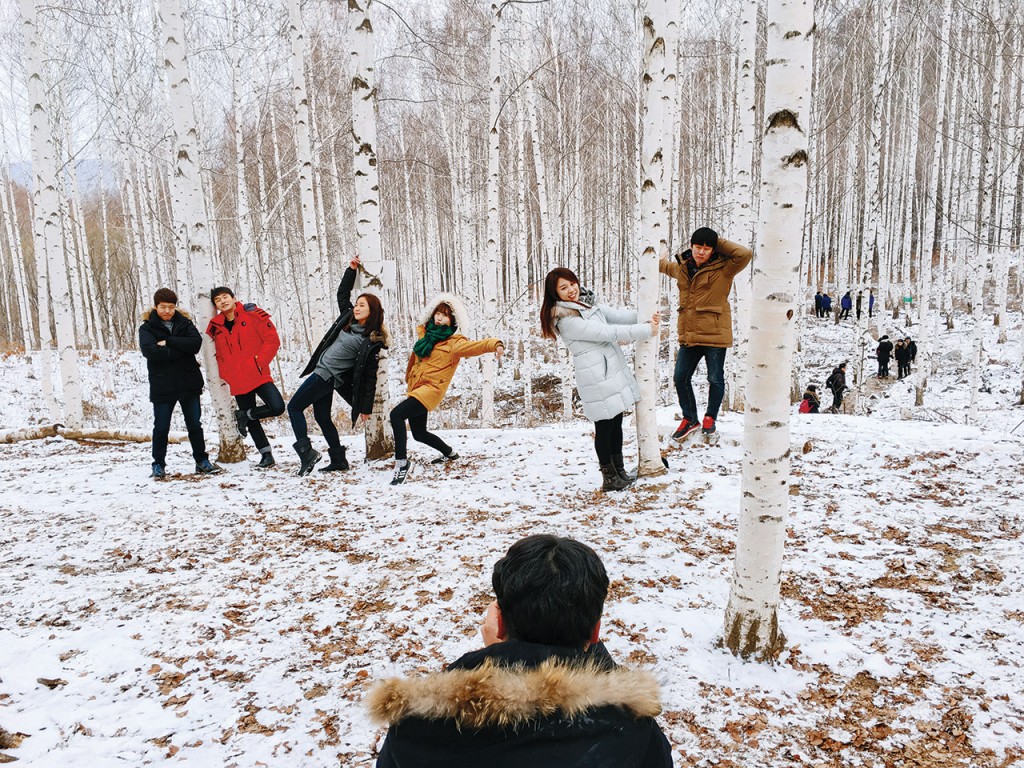 The forest is not especially hard to find. From Inje Bus Terminal, it’s a taxi ride – albeit a long one – to the parking lot at the entrance of the park, from which it’s a 3.5-kilometer hike to the top of the hill, where the forest trails begin. From the there, it’s another 3.5 kilometers through the forest and back down to the parking lot. Conceivably, you could make the round trip in two hours, but ideally, you’ll want to take your time – the forest was meant to be experienced at a leisured pace.

There are three trails available – the Birch Tree Trail (0.9 kilometers), the Healing Trail (1.5 kilometers) and the Exploration Trail (1.1 kilometers). Aside from length, however, the trails differ little from one another, and you’re better off letting your feet decide which turn to take. Facilities along the trail are minimal – there are a couple of wood observation decks, a shelter made from birch wood and a classroom space where lectures on the forest are sometimes given, but the trees are the star of the show.

While the trekking trails are not steep, they can be quite slippery in winter, when the ground freezes. This can make the trail a bit hazardous, especially on the way down. This writer wiped out twice on slippery ground on the way down, and he felt it the next morning. If you enjoy hiking in winter, it’s worth investing in a pair of cheap crampons – your knees and posterior will thank you. 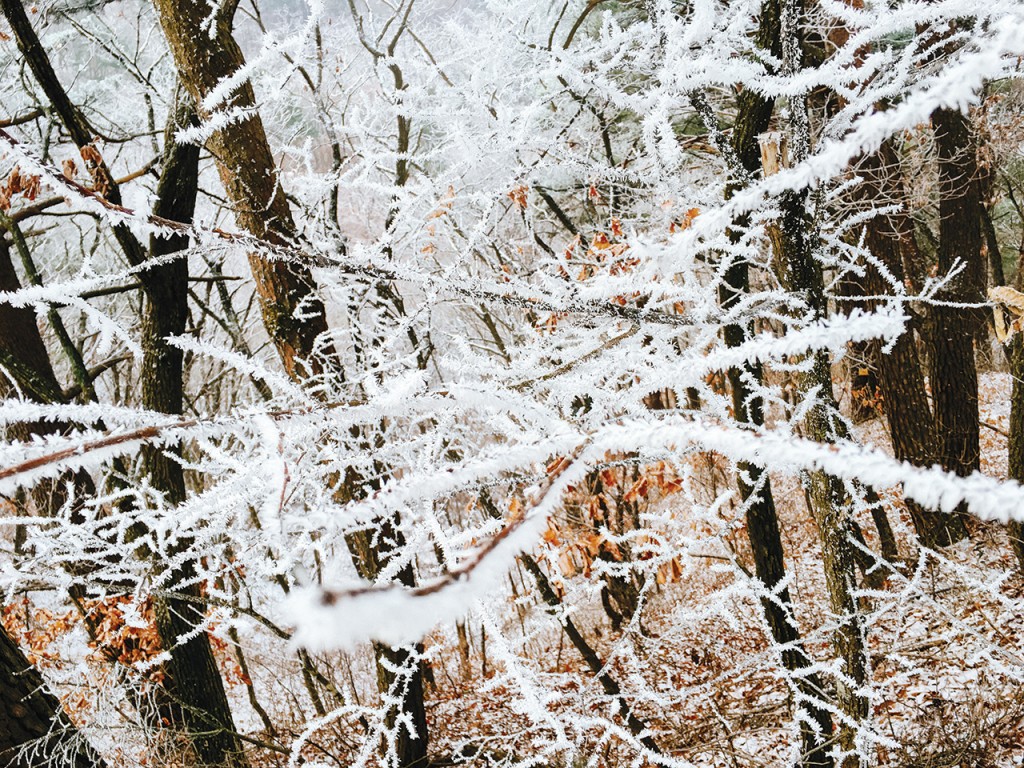 Along the way, you’ll pass plenty of birch trees and pine. Depending on the temperature, humidity and wind, some of the tree branches will be covered in crystalline frost. Stop and take a good look – the fractal patterns are truly fantastic. If you’ve got a macro lens for your camera, this is the time to use it.

Urban Korea’s worn and weary aren’t the only people turning up at the forest in droves. The trees have long been a favorite subject of local photographers. To capture as much of the forest as you can, it may help to keep a wide-angle lens in your bag. Creating panoramic images of the trees by stitching several photos together in Lightroom or Photoshop produces good results, too. Early morning is the best time to shoot, when the warm, long-angle light produces atmospheric images. And don’t forget the human element!

EAT> Gangwon-do is noted for its buckwheat noodles, or makguksu. You can find places serving this dish all over Inje, but one well-known place near the forest is Wondae Makguksu (T. 033-462-1515).

Another dining institution is Hanggukgwan (T. 033-461-2139), which has been in operation since 1960. It’s best known for its banquet-style meals, or jeongsik, prepared with fresh mountain vegetables. One of the local favorites it prepares in gomchwi ssam, or rice wrapped in groundsel leaves. Another local specialty is jilgyeongibap, or rice mixed with plantain leaves.

STAY> Inje doesn’t have much in terms of hotels and motels, but it does have plenty of scenically placed pension houses. One beautiful – albeit remote – place near the forest is the Aiolla Pension (T. 033-463-5334). It also serves food prepared from ingredients organically grown in the owner’s own field.

GO> Buses to Inje depart from Dongseoul Bus Terminal (travel time: two hours). From the bus terminal, you’ll need to take a taxi to the forest entrance (around KRW 20,000).