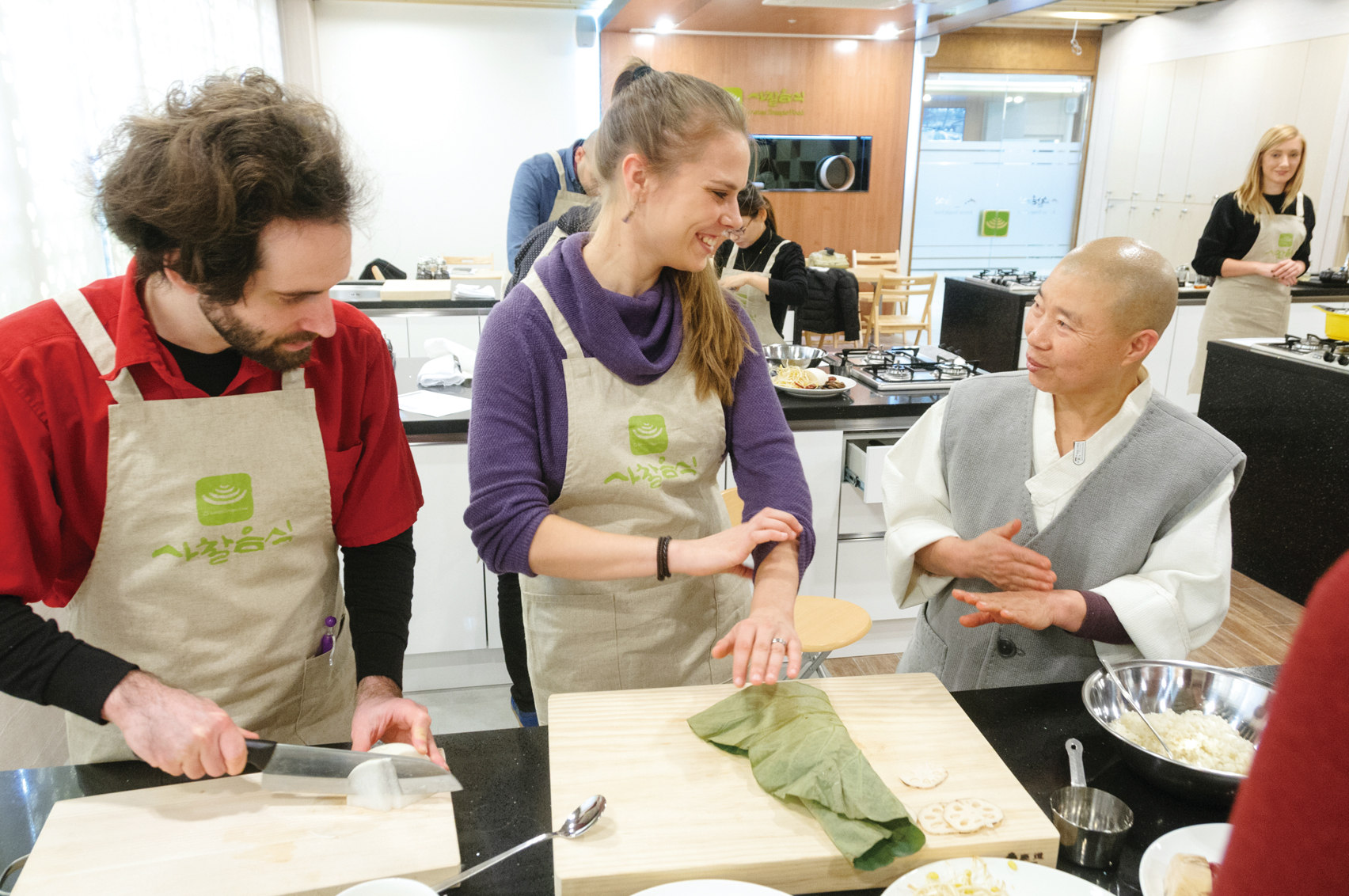 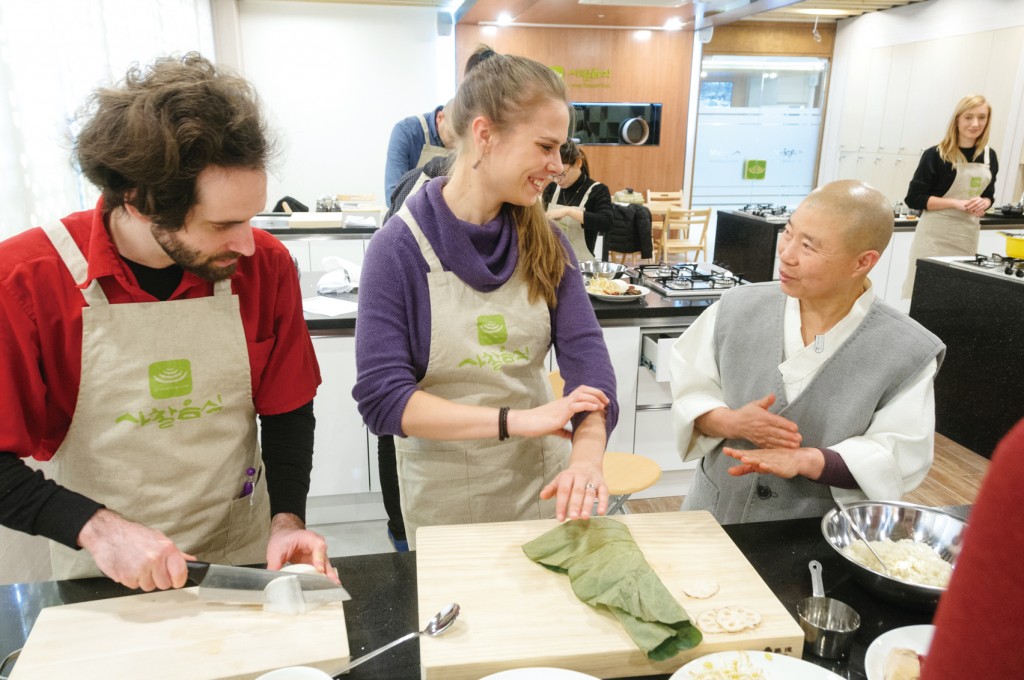 It’s a Saturday afternoon, and about a dozen international participants have gathered at the Korean Temple Food Center near Anguk Station, located just across the street from the popular Insa-dong district. They stand in groups of three or four at separate countertops, plates of ingredients placed neatly before them. At the head of the class, standing behind a table covered with an assortment of colorful vegetables and sauces, stands the Ven. Jeong Kwan, a Buddhist nun and expert on Korean temple cuisine. Sensing that her students were a bit tense, she smiles and tells them to relax. “The food will taste better that way,” she says.

Opened in December, the Korean Temple Food Center is designed to give international visitors and locals alike an opportunity to experience the sights, smells and sound of a 1,700-year-old culinary tradition. The programs here are very hands-on, and visitors are encouraged to try some of the delicacies.

Mandala on a dining table

Today, the students are making glutinous rice steamed in a lotus leaf, or yeonipbap. One of the most aesthetically pleasing dishes in Korean Buddhist cooking, yeonipbap is sometimes called a “mandala on a dining table,” likening it to the beautiful works of Buddhist art. Jeong Kwan demonstrates how it’s done: She molds a lump of pre-cooked glutinous rice in the center of a giant lotus leaf, garnishes it with a slice of lotus root and, with great artistry, folds the lotus leaf into a tight packet, which is then placed in a steamer. After Jeong Kwan’s demonstration, the students give it a try, with the nun-chef lending assistance and giving advice when needed. 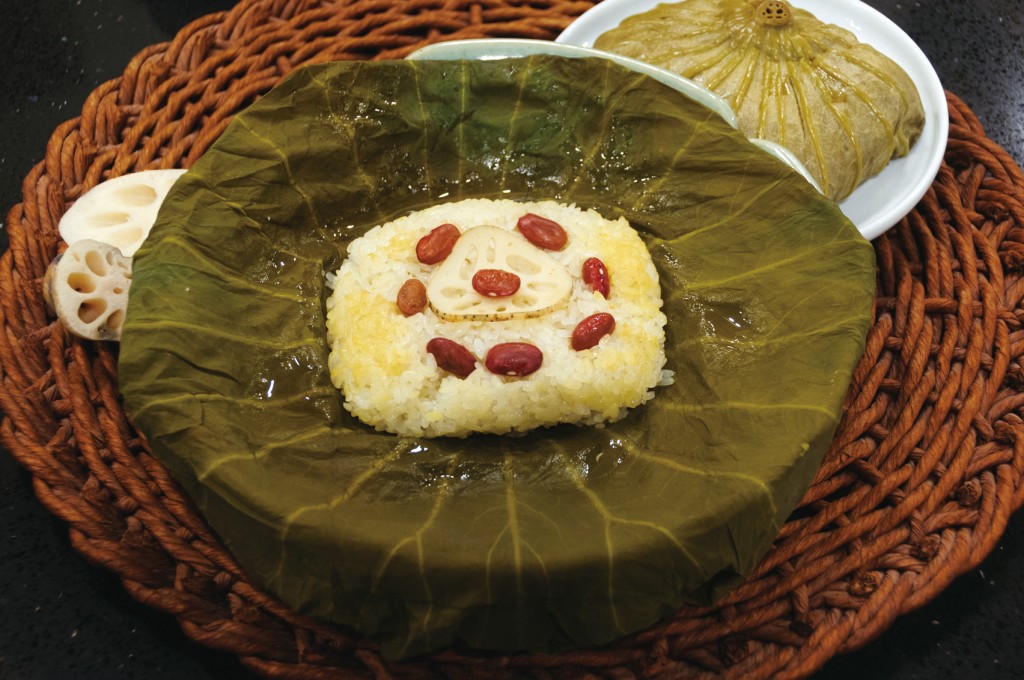 Jeong Kwan’s unassuming cheerfulness and approachability – she even helps one student tie her apron properly – might be what you’d expect from a Buddhist nun who spends most of her days in a picturesque hermitage in the mountains of southwest Korea, but perhaps not from someone many celebrated chefs praise for making “the most exquisite food in the world,” according to the New York Times. Try picturing Gordon Ramsay smiling as he helps a student tie her apron – you just can’t.

The yeonipbap, as well as the other dishes prepared this day, are completely vegan. “The biggest difference between temple food and regular Korean cuisine is that temple food does not use ingredients from animals,” explains Jeong Kwan. “This is in accordance with Buddhist teachings that consider all life precious and order us not to kill.”

Korean temple food is, as the name suggests, the food eaten daily at Korea’s Buddhist temples. This is a lot more significant than it sounds, however. The Jogye Order of Korean Buddhism explains that temple food constitutes “a cultural core that gives a concrete form to the essential teachings of Buddhism on its path to healthy living and ultimate enlightenment.” It teaches humanity to live in harmony with nature and appreciate the spirit of interbeing.

The act of cooking is itself a form of meditation. “In Korean Buddhism, we believe every process in preparing food is a form of practice,” explains Jeong Kwan. “Because we farm and harvest ingredients ourselves and use those ingredients to make the food we eat, we cannot help but use seasonal ingredients. And because we cook what we’ve harvested from the garden, I think temple food is truly farm-to-plate.” 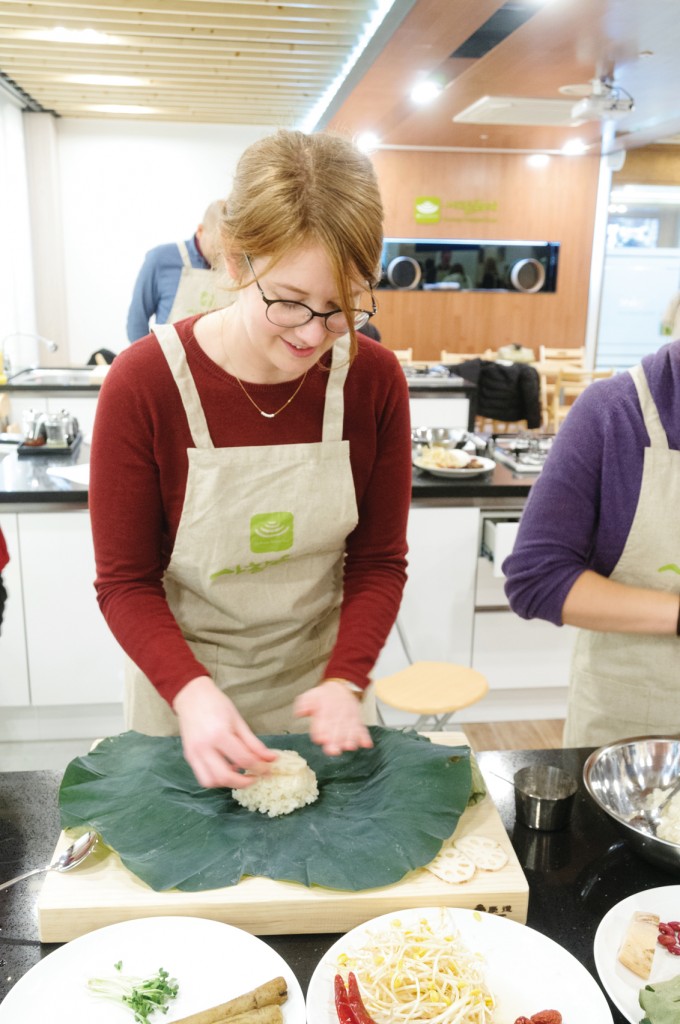 For the students, the class was a rare opportunity to experience the beauty of Korean Buddhist culture in the most direct way possible. Some were impressed by the space itself. “What most impressed me was the wall-mounted, touch-display recipe generator,” says Douglas Holden, an American professor. “Pictures of the foods could be scrolled through and then a recipe could be printed out.”

Others appreciated the opportunity to about “slow life” from a master. Ashley Higgins, an American teacher, says the experience felt like a “glimpse into living a true, unadulterated wholesome life via food.” As she explains, “To learn about food and cooking firsthand from someone who forages, grows and makes from scratch most – if not all – of her ingredients was inspiring, thought provoking and awesome.”