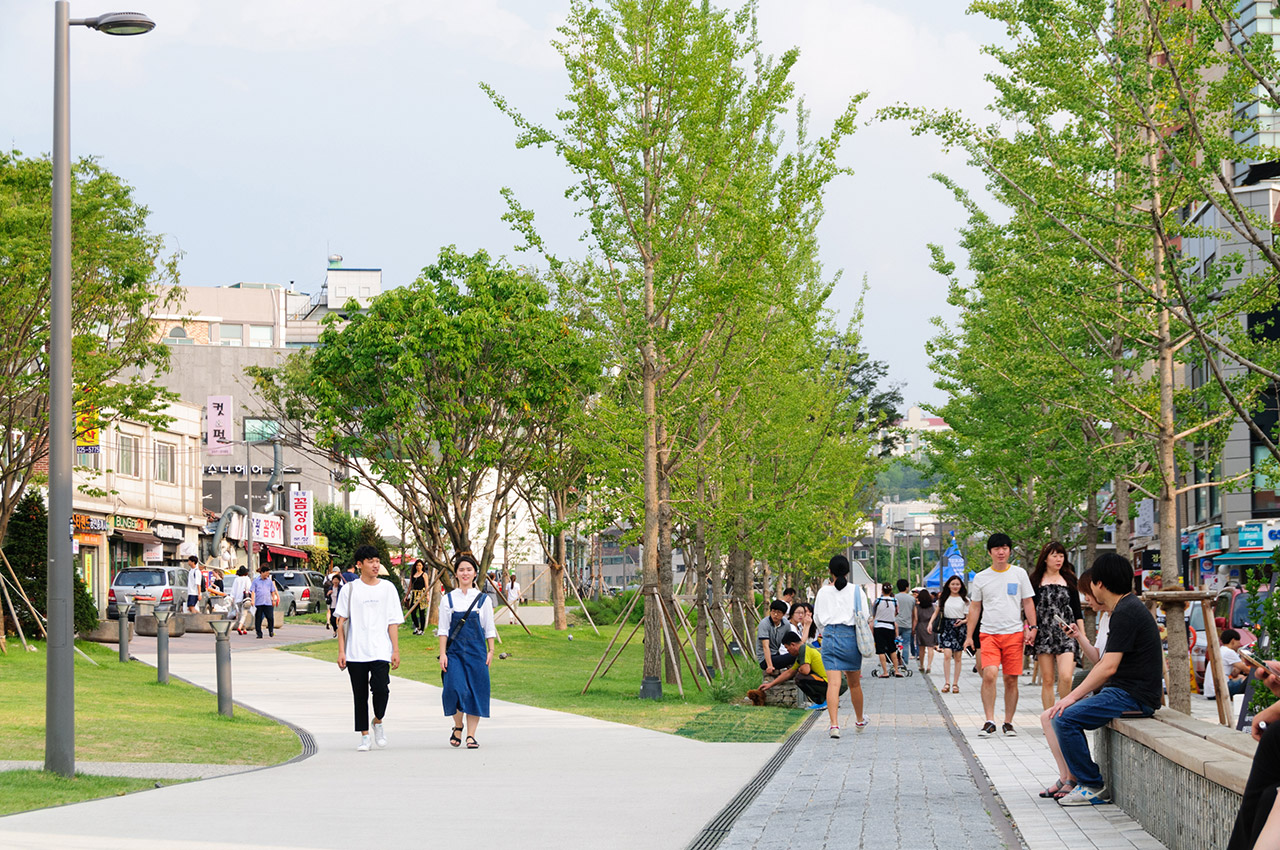 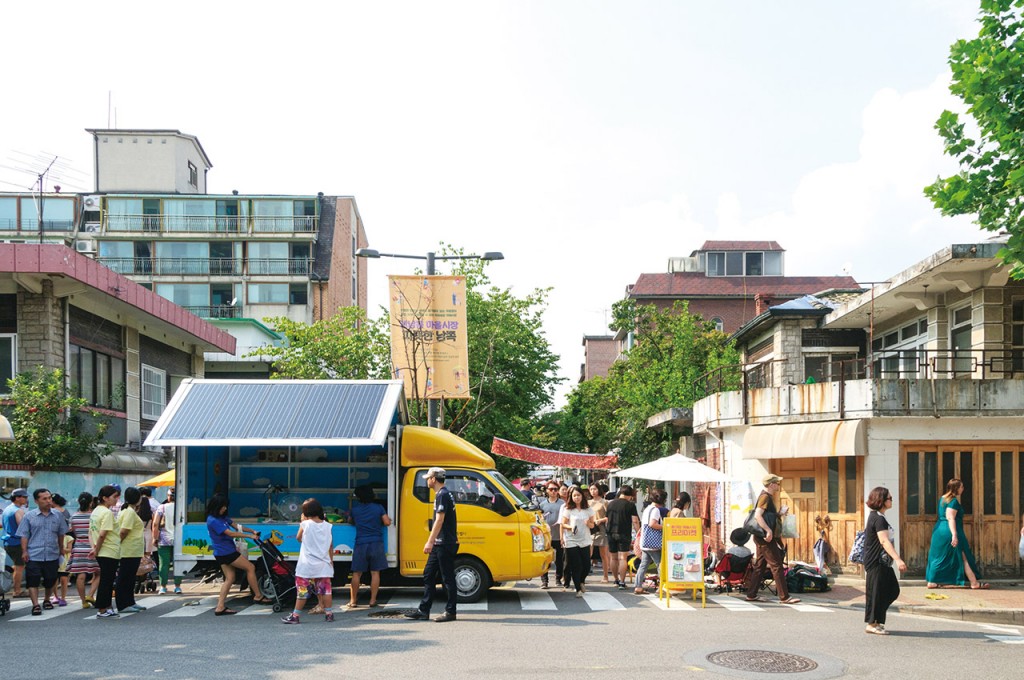 The Yeonnam-dong district is yet more proof that Seoul is always changing – and in a positive direction, at that.

If you had visited Yeonnam-dong just a few years ago, you would have found an old railway flanked by quiet-but-aged residential alleyways with little that would classify them as a travel destination. Now, however, the neighborhood offers a entrancing mix of edgy craft shops, green park spaces and uniquely designed cafés and eateries all tied together by an atmosphere of youth and creativity. You could spend days here exploring its back streets, where every corner yields a new – and often wonderful – discovery.

Along the tracks: From indie culture to community art

A short walk from Exit 6 of Hongik University Station (Gyeongui-Jungang Line) brings you to Ttaengttaeng Street, named for the sound of the bell (“ttaeng ttaeng”) that would ring at the railroad crossing when a train was approaching. The main landmark here – aside from the empty grass field where the railroad tracks used to sit – is the venerable Sanwoollim Theater, which opened in 1985 as the home of the aptly named Sanwoollim Theater Company, a drama troupe with a history that dates back to 1969. In the 1990s, as the theater began hosting more experimental works, more small theaters opened nearby, transforming the Hongik University area – popularly known as “Hongdae” – into the birthplace of Korea’s indie culture.

From Sanwoollim Theater, follow Dabok Street back to Hongik University Station. Many small shops, cafés and bakeries have opened up on this road recently, including an old toy museum that’s popular with the dating crowd. Once you get to the station, follow the main road past Exit 3 until you reach the start of a long, green park. 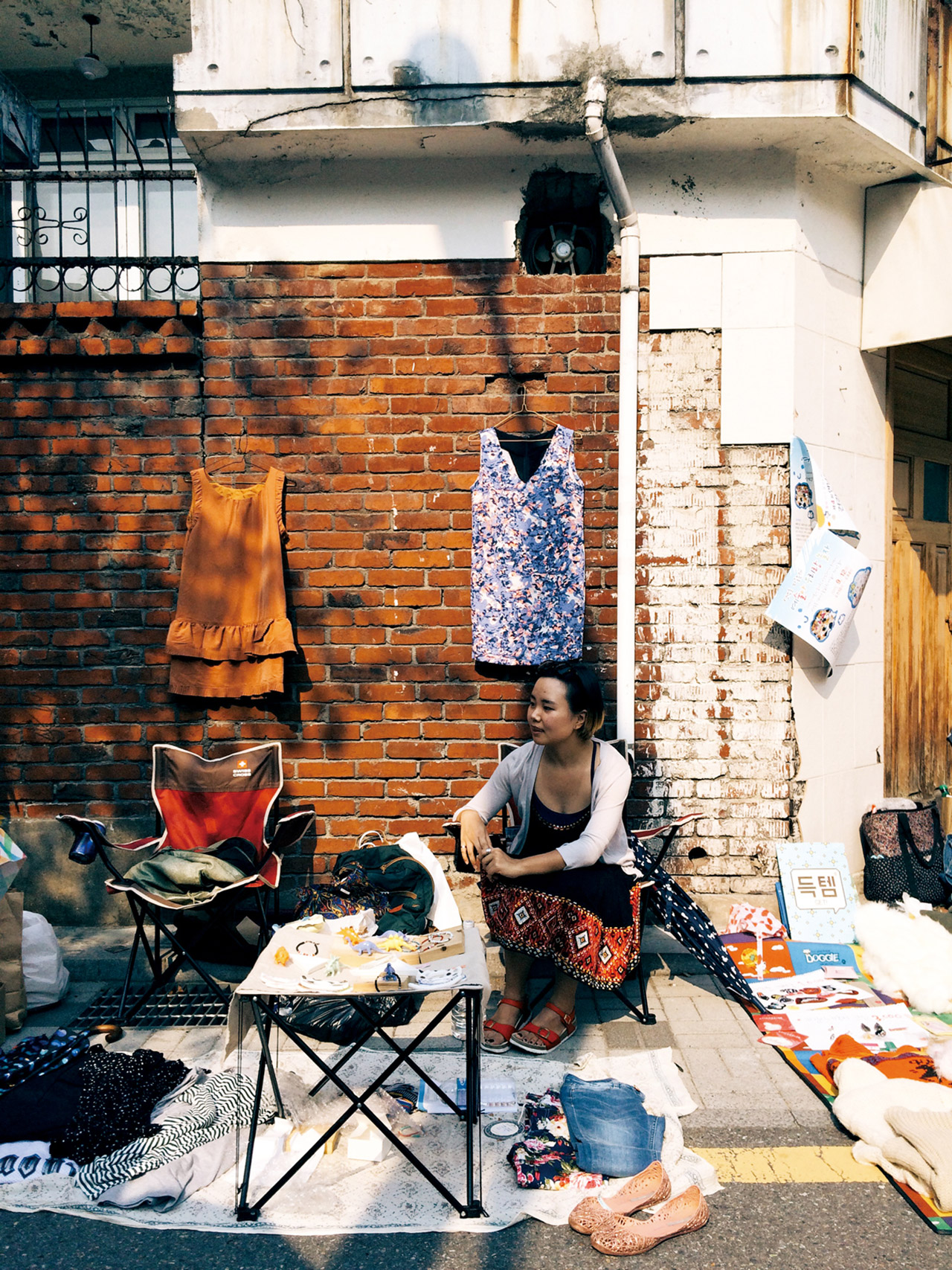 An urban forest where the train once ran

The Gyeongui Line Forest Park is a narrow, 1.3 km stretch of green space cutting through the heart of Yeonnam-dong. Flanked by homes and apartments on both sides, the green corridor feels like a rift valley dividing the city in two. When the weather is good, you’ll find plenty of young couples and families strolling along the walking paths, picnicking on the lawn in the shade of a tree or, more often than not, enjoying a meal or beverage at one of the many restaurants and cafés that have opened along the increasingly popular park.

The urban forest follows the path of the old railway that once linked Seoul with the city of Sinuiju. In the early 2000s, work began on turning the line, formerly a single-line diesel rail, into a double-line electric rail; urban sections of the line that had been aboveground were relocated underground.

The Yeonnam-dong section of the old line has reflecting ponds, works of symbolic art and, most beautifully, a 1 km line of ginkgo trees that turn golden in autumn. It’s a great place to have a picnic, but couples should mind their manners – here and there you’ll find signs asking that visitors refrain from excessive expressions of affection.

In the alleyways to the left of the tracks are a good number of small-scale craft shops specializing in knitwear, leather goods, flower arrangements, accessories, ceramics and more. Be sure to check for schedules for the one-day classes offered by many of these shops. 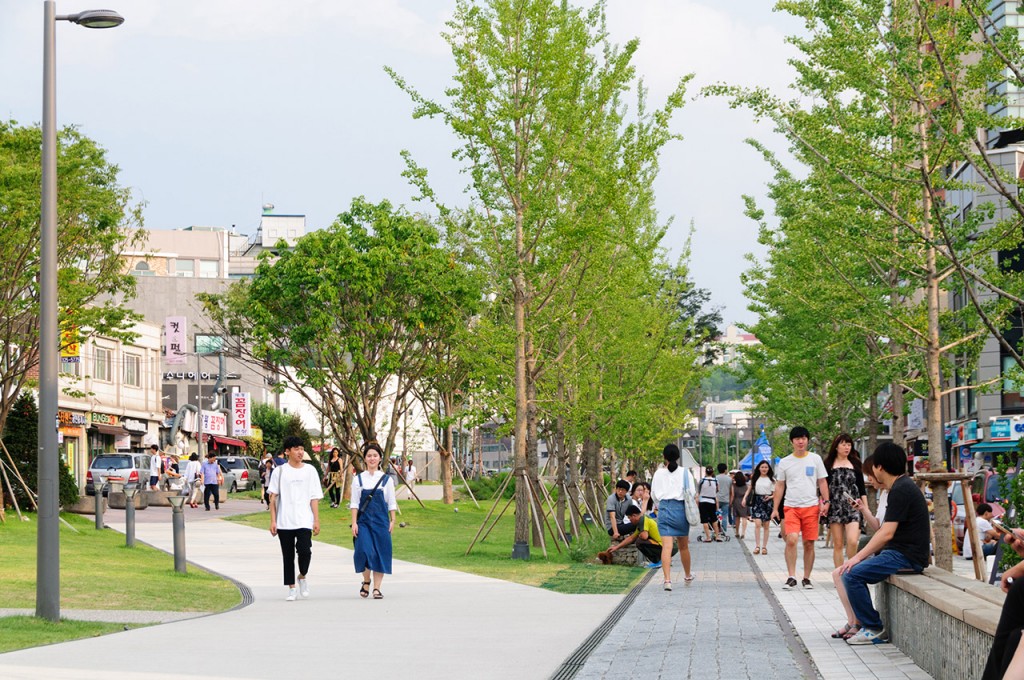 If you have the luck to visit at the right time, drop by the Yeonnam-dong Village Market – The Warmer South (따뜻한 남쪽) – which usually takes place the last Sunday of every month. The event is one of the city’s most vibrant flea markets with plenty of handmade crafts, artisanal foods and used goods – including lots of vintage clothing! In addition to being a good spot to pick up truly unique crafts, it’s also a great place to meet new people and get a richer understanding of the neighborhood and its culture.

From The Warmer South, navigate the alleyways in a generally southeasterly direction until you reach the Dongjin Market. Don’t worry if you get lost – in this neighborhood, getting lost is part of the fun. In the side streets between the Dongjin Market and the old railway tracks, many of the aging homes have been turned into quaint ateliers, boutiques, bookshops, guest houses, gourmet coffee shops and restaurants that, whenever possible, salvage as much of the neighborhood’s past as possible. Coffee aficionados in particular will love this part of the area. You’ll find plenty of unique coffeehouses here, including one that specializes in hard-to-find Turkish coffee and another that serves – no joke – one-liter cups of java for people who really need their caffeine fix. 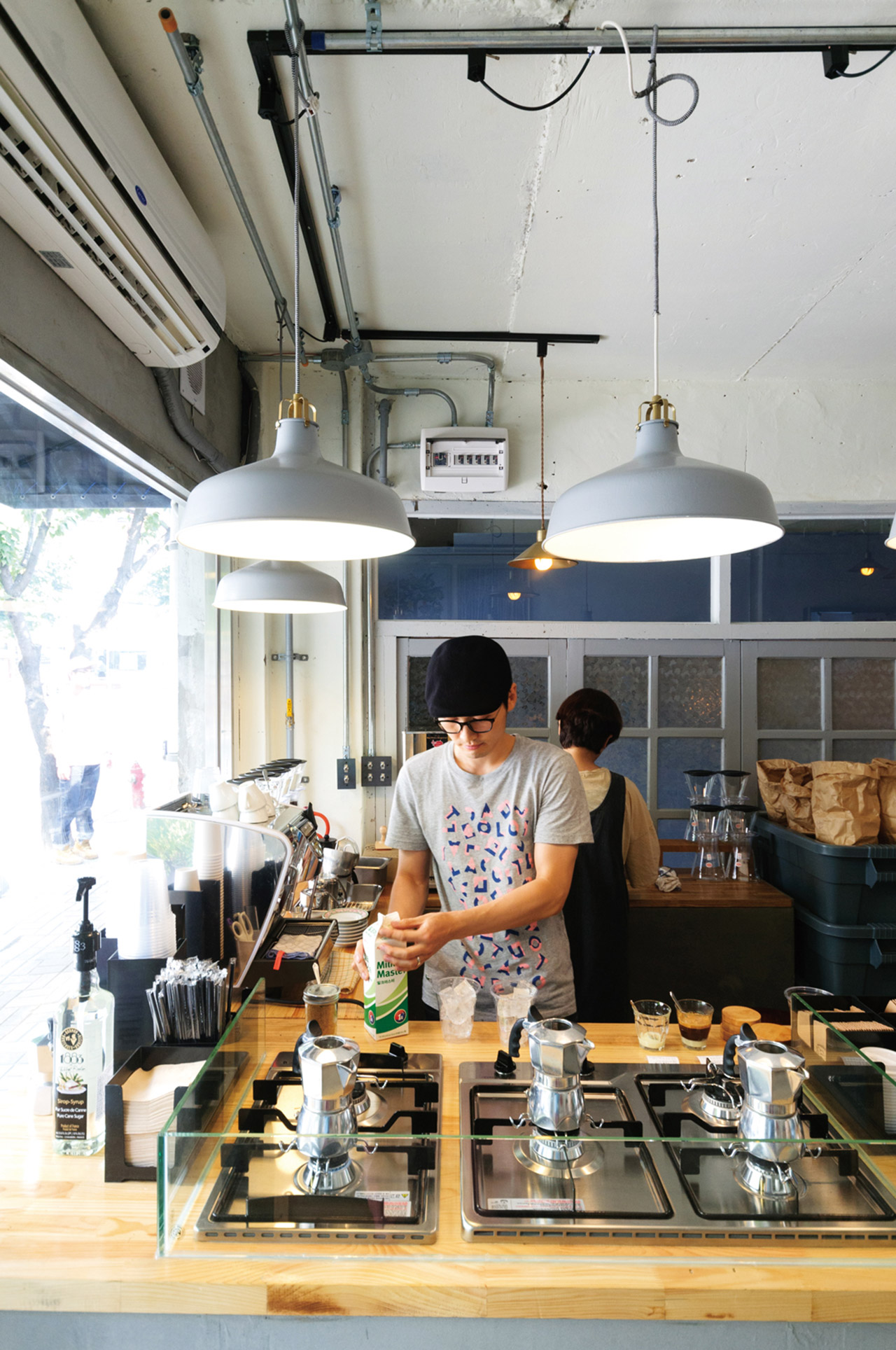 Much of the neighborhood’s charm lies in the tension between the old and new – or, more specifically, the parochial and global. The brick and tile storefronts and vintage fonts of the winding alleyways may seem like something out of previous decade, but the throngs of young people in the streets certainly aren’t. Talented and globalized young chefs have opened humble laneway shops where the rents are low but the flavors are definitely not low-rent – don’t be surprised by the lines of young couples waiting to get into some of the best restaurants in town. One especially popular place is a Thai restaurant in the basement of the Dongjin Market arcade; on a weekend, expect to wait an hour to get in, but the chef – a native of northern Thailand, which is renowned for its spicy flavors – will make sure your wait it worth it. Watch for a hole-in-the-wall Vietnamese joint serving excellent and affordable banh mi sandwiches, as well as a Mexican joint highly recommended by Mexican expats.

You’ll find plenty of good Chinese restaurants, too, thanks to the large numbers of expatriate Chinese who live in this area. Unlike Chinese restaurants elsewhere in Korea, which largely target Korean diners, the Chinese restaurants here cater to a mostly Chinese crowd, so the food is appropriately authentic. There are plenty of options near the Donggyo-ro Intersection, easily recognized by their bright, exotic exteriors, with the popular ones because of the long lines at lunch and dinner time. One Chinese dish to try in the neighborhood is seasoned and sliced pork trotters, or ohyang jokbal.

Hidden in the alleyways between the Gyeongui Line Forest Path and Dongjin Market are several pleasant guest houses, and their number is growing. Many if these places are converted homes and low-rise apartments, giving them a warm, comfortable vibe. The alleyways where they are congregated are blissfully quiet, too. Not only are they very relaxing places to stay but they are right on the AREX line to Incheon International Airport and just a 10-minute-walk from Hongdae and its popular clubs and bars.

Some of the guesthouses have their own kitchens and cafés where you can have breakfast, but if you’re looking for something more substantial, Yeonnam-dong has plenty of eateries that serve breakfast and/or brunch. In addition to the American-style place mentioned earlier, you’ll find another place specializing in pancakes. Near Dongjin Market, a pair of architects have opened up an Italian coffee house with a good brunch menu. And this is just the tip of the iceberg.

Hanbok in the City
Scroll to top
댓글 로드중...