UNESCO-registered fortress is a marvel of science and art

In a land of fortresses, Suwon’s Hwaseong Fortress is the crown jewel.

Built at the end of the 18th century as an act of filial piety by a king in honor of – in his view – his unjustly executed father, Suwon’s towering old city walls stand testiment to the scientific and engineering genius of the late Joseon Dynasty, when new ideas and new ways of looking at the world brought about an intellectual and social renaissance. Designated a UNESCO World Heritage Site in 1997, the fortress represents the pinnacle of East Asian fortress design – its massive gates, watchtowers and bastions are truly a sight to behold.

Located just an hour’s subway ride from Seoul, Hwaseong Fortress is one of Korea’s most easily approachable historical sites. The Suwon Hwaseong Cultural Festival (Oct. 8-11) is an excellent time to become acquainted with this spectacular piece of Korean history and heritage.

Hwaseong Fortress was the brainchild of King Jeongjo (r. 1776-1800), a reform-minded monarch whose energetic and progressive leadership oversaw a flowering of Korea’s social and intellectual ecosystem. Under Jeongjo, silhak, a movement within Korean Confucianism to better the lives of the people by prioritizing real-world issues over metaphysical debate, took root. Science and technology – some of it imported from the West by way of China – flourished as a result.

Hwaseong is, at its heart, an act of intense filial piety on a grand scale. In one of the most heartrending incidents of the Joseon Dynasty, Jeongjo’s father, Prince Sado, was executed by the prince’s own father, King Yeongjo, after the former had allegedly gone insane. Jeongjo suspected court intrigue was the real reason for his father’s demise, however, and after taking the throne, he moved to have his father’s reputation posthumously rehabilitated. He ordered the construction of a grand new walled city just south of the royal capital of Hanyang, today’s Seoul, to house the late prince’s tomb.

In addition to piety, Jeongjo had other reasons to build the fortress, too. In the 16th and 17th centuries, Korea had suffered devastating invasions that left much of the country in ruins. During the invasions, Korea’s traditional mountaintop fortress and city walls performed rather poorly against the latest offensive technology, and the king was keen to see that this never happened again. There were political concerns as well. Jeongjo intended to move the royal capital to the new fortress, far from the endemic intrigue and factional strife of Hanyang. 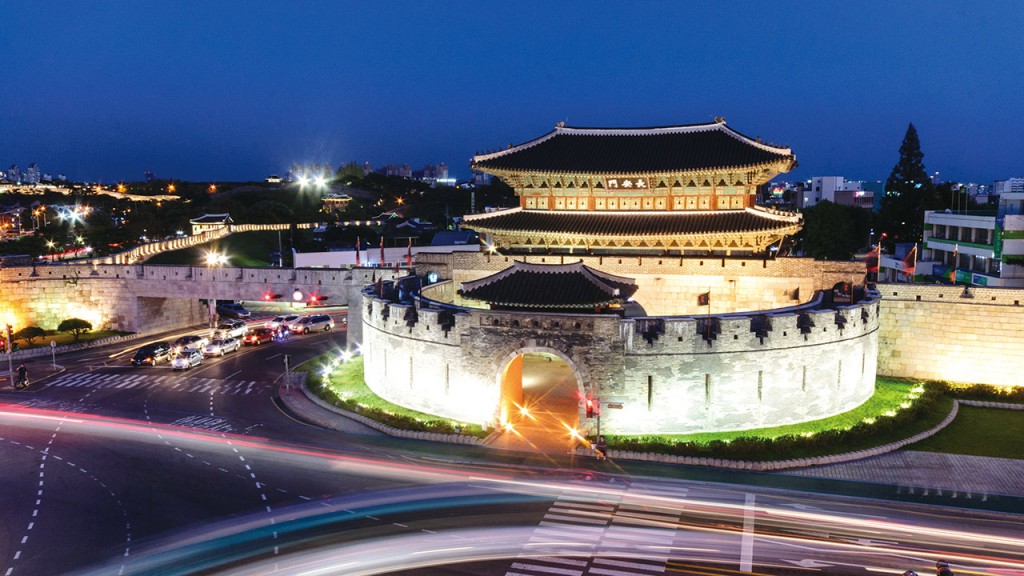 A work of genius combining East and West

Jeongjo tasked the brilliant young scholar-official Jeong Yak-yong with designed the new fortress. Benchmarking the best in Korean, Chinese and Japanese fortress design and incorporating even elements of Western castle architecture, he built not just a fortress, but a technological marvel for his era. To construct the massive walls, gates and watchtowers, he designed and employed a brilliant system of pulleys and cranes operated by paid workers and artisans, not corvée labor as was the usual practice of the times. It took just two years to complete the massive undertaking.

Unlike most Korean fortresses built until then, which were constructed of piled granite, Hwaseong Fortress makes extensive use of brick, particularly in the battlements. This allowed for more diverse architectural forms than were possible before. To bake the bricks, artisans were brought to Suwon from all over the country.

In true Korean fashion, the fortress makes extensive use of the surrounding landscape. In particular, the walls embrace not only the lowland areas where the town is located, but also the surrounding heights, a use of topography rarely found in China or Japan.

The real genius of the fortress lies in its extensive defensive works. Most fortresses built in Korea until this point were simple walls. Hwaseong Fortress, on the other hand, bristles with blockhouses, observation towers, bastions, crenellated parapets and other military facilities that make use of advanced military science principles. Secret gates located at several points in the wall would allow a defending army to make sallies without weakening the defense on the wall. 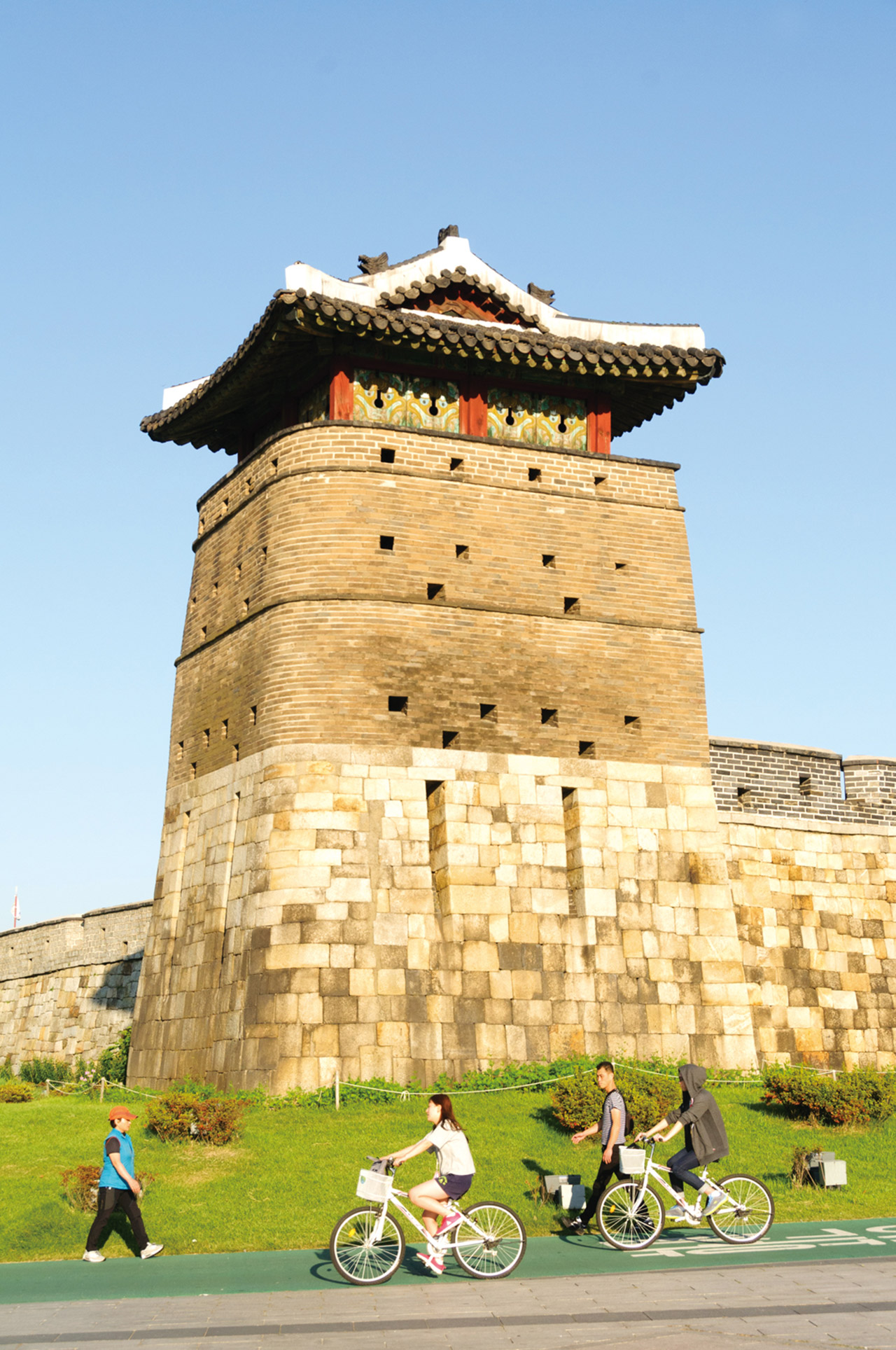 Arts by the palace

Within the walls, at the foot of Mt. Paldalsan, is Hwaseong Haenggung, a detached palace, or haenggung, originally built in 1789. Haenggung were palaces used by the king when he was away from the capital. Hwaseong’s was intended to be used by the king during visits to the nearby tomb of Prince Sado.

The largest Haenggung in Korea, Hwaseong Haenggung is a sprawling complex of royal halls and pavilions. Most of the original compound was destroyed by the Japanese during the colonial era; what you see today dates from a 1996-2003 reconstruction. Nevertheless, it’s a very picturesque place that is sometimes used in historical dramas. Between April and November, traditional cultural performances are performed in front of the palace at 2 PM on Saturdays and Joseon military exercises are reenacted at 2 PM on Sundays.

The area around the Haenggung has developed into a local arts district akin to Seoul’s Insa-dong. An alley lined with cafes, galleries and craft shops leads from the palace to the Paldalmun Gate. The Suwon Hwaseong Museum, where you can learn more about the history of the fortress, is also located nearby. 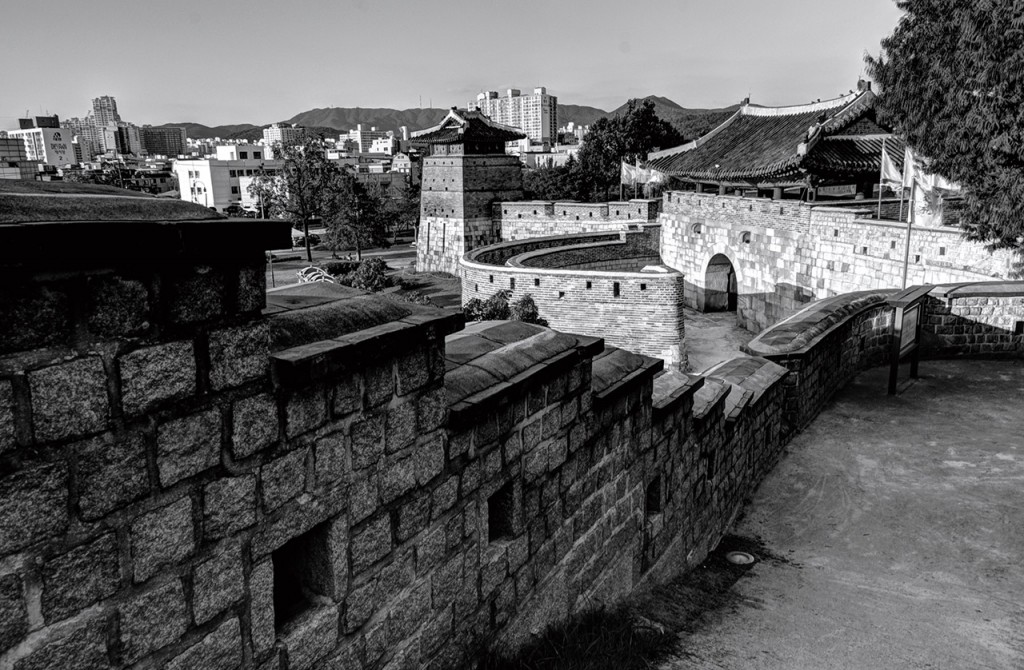 Marking its 52nd year, the Suwon Hwaseong Cultural Festival is one of Korea’s longest running regional celebrations. The festival features lots and lots of cultural performances, a parade, traditional games, hands-on programs and much, much more. Don’t miss the fireworks shows on the opening and closing nights.

EAT> Suwon is quite famous for its galbi (barbecued ribs). Yeonpo Galbi (T. 02-255-1337), near Hwaseomun Gate, is especially well known, but there about 100 restaurants specializing in this dish throughout Suwon. The arts street near Hwaseong Haenggung is full of cafes and snack shops. For something a bit different, try the ice cream-filled fish breads at Café Aboong’s Secret Recipe.

GO> The fortress (Paldalmun Gate) is a 20-minute walk from Suwon Station, Line 1.