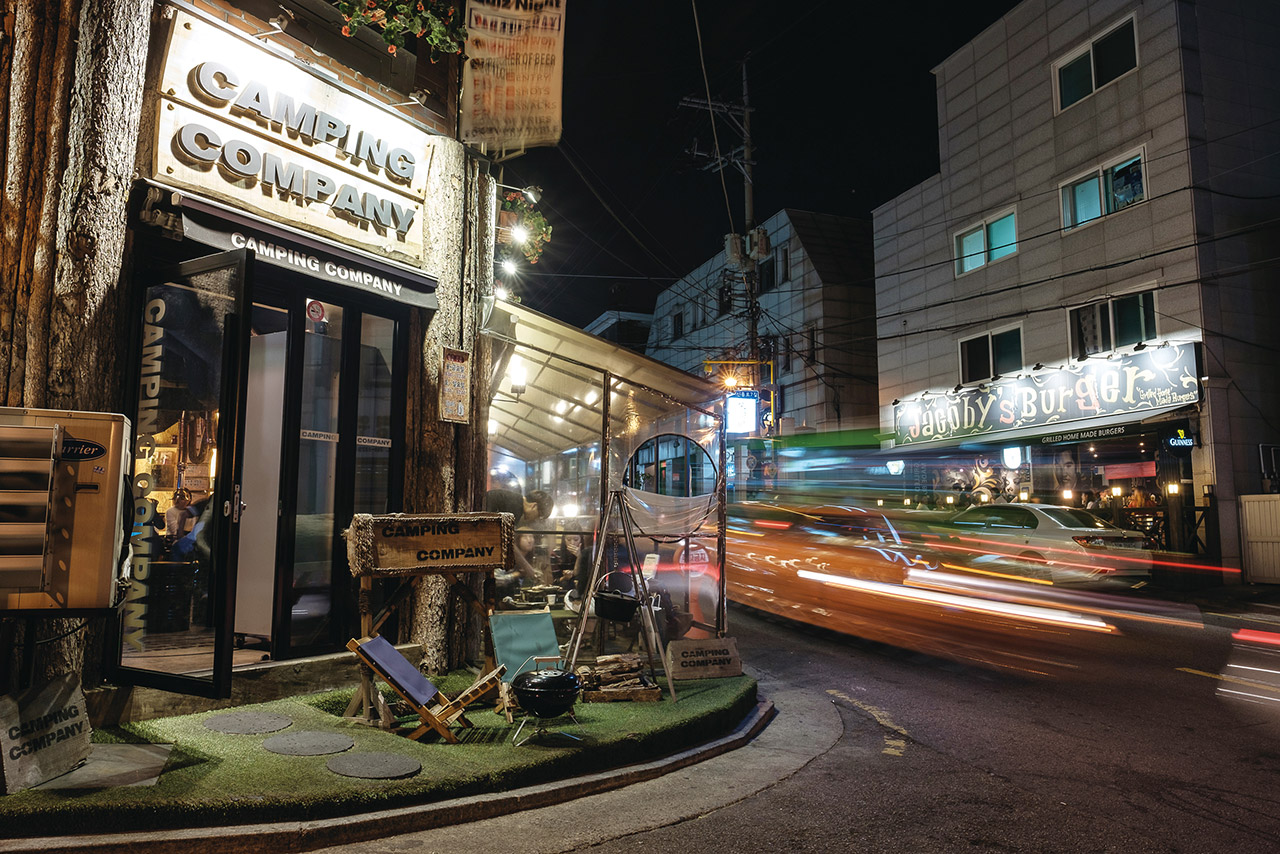 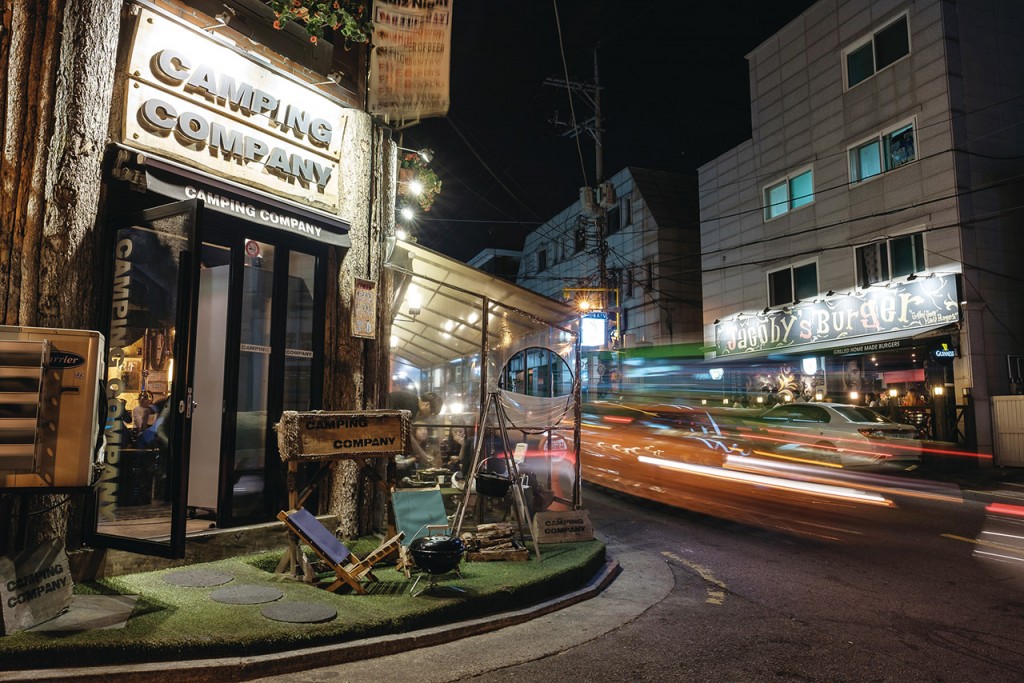 Haebangchon brings together people and cultures with attitude, food and music

Of the many neighborhoods in Seoul, there is one that stands out as a testament to how close-knit communities of expatriates and Koreans can flourish together, where pasts blend with trends and where daily life meets weekend destination.

Haebangchon – or HBC as the locals fondly call it – largely comprises non-Koreans who see themselves as members of a community that is supportive and social, and that they genuinely call home. For many residents, HBC is likened to a European village or a small town in North America where everyone knows each other and welcomes newcomers.

HBC has evolved through a difficult and fascinating history. Originally a settlement for Japanese residents associated with the nearby Japanese military base in the post-Russo-Japanese War era, the area still features a 108-step staircase that once led to a Japanese Buddhist Temple. These steps, which became known as the “108 sufferings,” are still visited by Buddhists today. In the post-Korean War era HBC became a refugee settlement for North Koreans and gained its name: Haebangchon, which translates as “Liberation Village.” For the next 50 years it sat as a daldongnae, or a neighborhood for poor and working classes, and was passed over by developers during the boom years.

“I started my business in 2009,” says HBC native Han, owner of Le Café. “At that time there were lots of foreigners living here from many different countries. My family has lived in HBC for more than 40 years and I wanted to open a coffee shop, even though many people were surprised.” Han continues to describe what it was like just six years ago: “In 2009, when it got dark (at night), there were so few businesses that the street went dark as well.” Han added that one of the biggest changes is that HBC residents now spend their money in the community supporting local businesses. Han enjoys having a café for residents and comments on how friendly locals always take the time to greet him and chat. 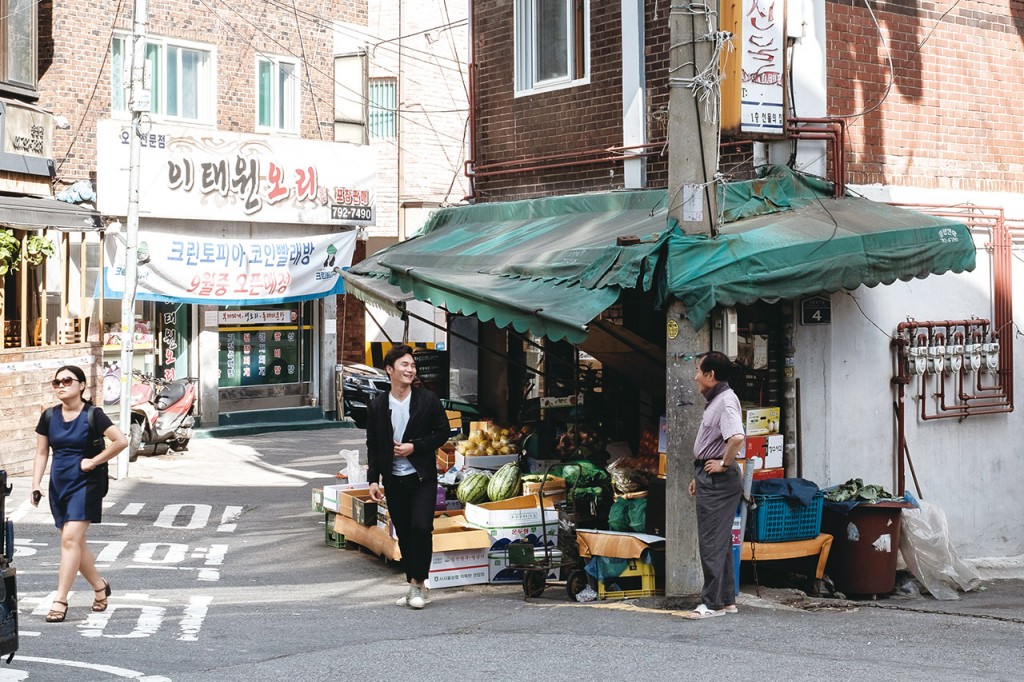 Bask in history and community

Today, HBC remains vibrant day and night. Visitors can mingle with locals, enjoy a variety of pub and café cuisine, and walk through one of the most interesting neighborhoods of Seoul. There are a handful of mouthwatering burger joints, restaurants with unique culinary delights, cafés offering sweet treats and some of the best Korean barbeque in Seoul.

Visitors can stroll north from Noksapyeong station through a shaded walkway canopied by mature gingko trees that remind visitors they are entering an area of Seoul with a long, rich history. Veer left when the trees end and venture up the main road of Haebangchon.

Further along visitors pass large stacks of Kimchi pots, which have gained iconic status due to how frequently residents use them as a directional landmark. On any given day, this is where you will first see HBC’s harmonious blending of old and new Seoul: grandmothers inspect traditional pottery and haggle over prices while twentysomethings listen to hip-hop, take selfies and enjoy their very nontraditional toasted sandwiches in adjacent storefronts.

Just past the kimchi pots lies a successful foreigner-owned bar called The Hidden Cellar, neatly tucked away in an artsy underground space. It is owned by South African native Tobias Jerling, who says, “I opened because I knew it was an up-and-coming neighborhood.” When asked about the music events he hosts, the local resident explains, “There is a loyal crowd of local expats and a strong contingent of Koreans that come regularly for our Sunday and Wednesday music from 7 to 11 PM.” New visitors to the area are welcome to join any music night and have the opportunity to see an interesting aspect of HBC culture. 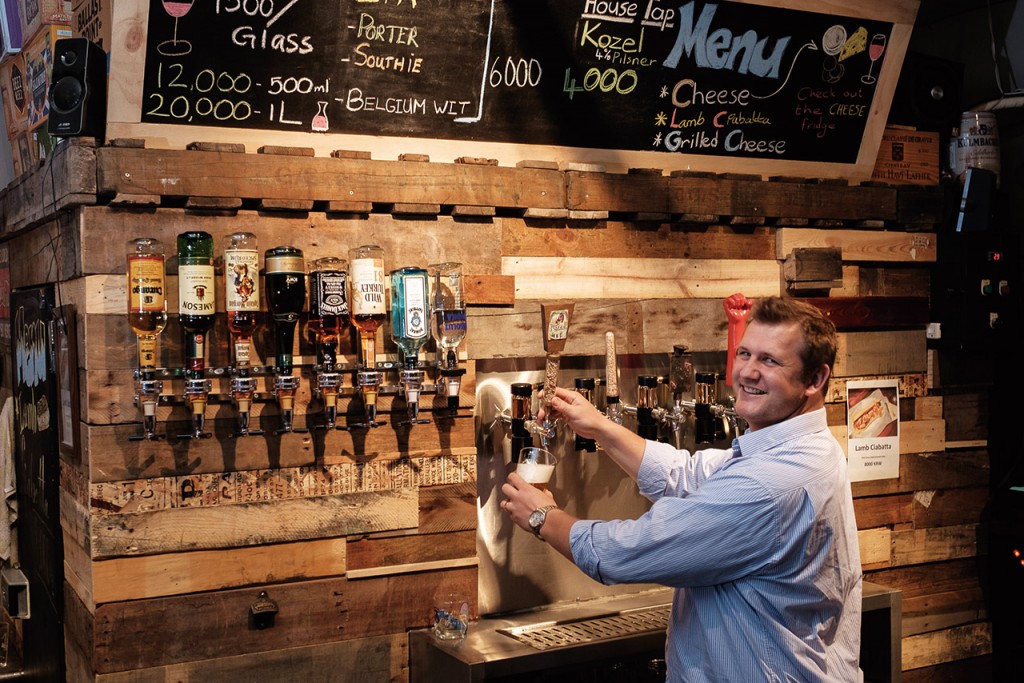 Further up the road is the heart of the HBC bar and restaurant district. Here, residents walk their dogs, carry groceries, chat with friends, and stop for a caffeine fix or a quick pint alongside HBC’s teeming “tourist” groups, or Koreans arriving from other parts of Seoul and beyond to explore, marvel, drink, dine and take selfies to share their excursion.

These tourists, as HBC residents cheekily refer to them, come to HBC for a variety of reasons. They want to see the local community, enjoy HBC’s gastronomy and to experience what they have seen in the Korean blogosphere and friends’ newsfeeds. The most popular stops are Bonny’s Pizza, My Juice, Casablanca, and Bomb’s Burger. Malcolm Luke, a New Zealand native and owner of Bonny’s Pizza, says, “It’s obviously an exciting, dynamic and progressive time to be in business in the area. For us, the influx of guests in the area is an almost unqualified positive; what business wouldn’t be pleased to have hundreds of orderly, well-dressed young people come through their doors every day? We know there are longterm members of the community, both foreign and local, who are indifferent at best about the daily inundation, but we tend to think if people find your community interesting enough to come and visit, and they’re respectful and polite, that should be flattering.”

HBC’s night life is also thriving due to its growing music scene. Michael Burkhardt, a local musician who performs in the area, says, “There are a few venues to check out live music in HBC. Occasionally, a local might be sitting on a front step with a guitar, casually strumming for passersby, but the narrow street doesn’t allow for busking or street performances. The best thing about Seoul and HBC in particular is that things change quickly. Hopefully a more robust live music scene will grow as the neighborhood evolves.” New businesses are opening with stages for live performances, and residents agree that the live music scene will likely continue to grow and draw even more visitors to the area. 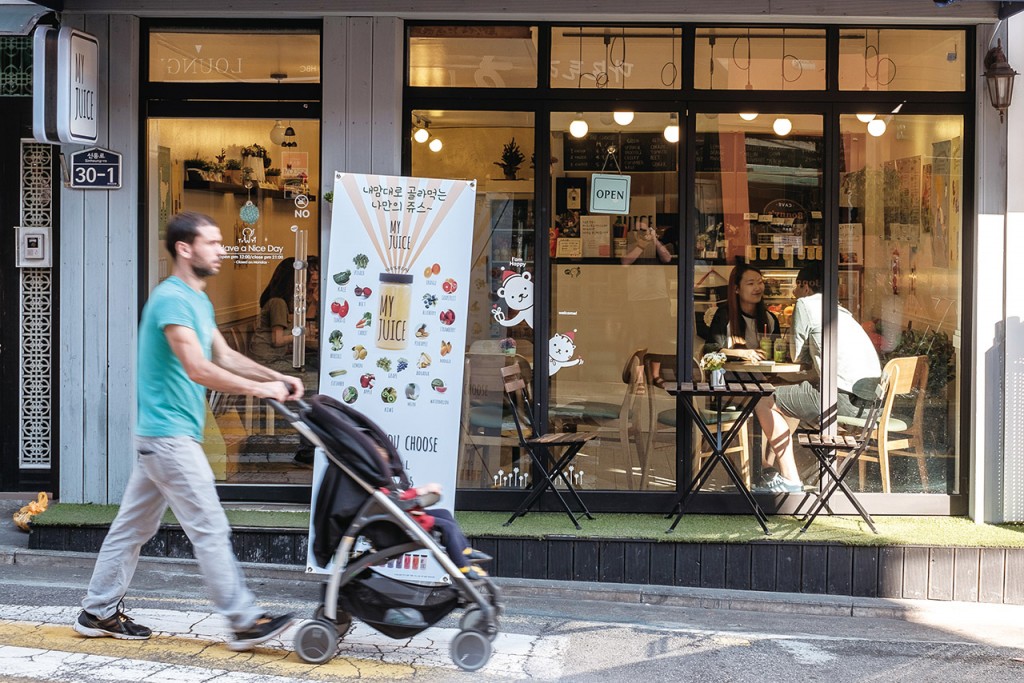 In May and October HBC celebrates the HBC Music Festival, an event originally created in 2006 by musician Lance Reegan-Diehl. While it started with just three local bars, it has now expanded into Gyeongnidan and Itaewon and usually occupies around 25 venues. There are usually around 80 to 120 live performances (up from just 29 in 2006), with as many as 3,500 attendees. This is a free festival that is funded by sponsors, venue owners and private parties. According to Reegan-Diehl, the overall response from residents has been “extremely favorable, and the support from the local police has been outstanding.” He believes the festival will continue to grow but promises that it will “always be a live performance music festival. That’s the beauty of it: an artist and their instruments and voices … not USB sticks.” Everyone is welcome to join HBC for live music in intimate venues Oct. 16 and 17.

While HBC does not boast the gentrification of Itaewon or Gyeongnidan, many new businesses have opened that primarily target visitors. This has led to some concern, as a few residents believe that there has been a loss of businesses that the neighborhood needs. This feeling has been compounded by traffic and parking problems, and a general perception that HBC may be losing its character.

What does the future hold for HBC? There are rumors of sidewalks and traffic calming islands coming in 2016. Jerling of The Hidden Cellar strongly believes that HBC will continue growing, especially with the promise of new sidewalks and rent restrictions. Luke of Bonny’s Pizza says, “Watch this space! Who knows what HBC could be in five years; it could boom and bust, or become one of the hottest, alternative-independent entertainment districts of Seoul.” 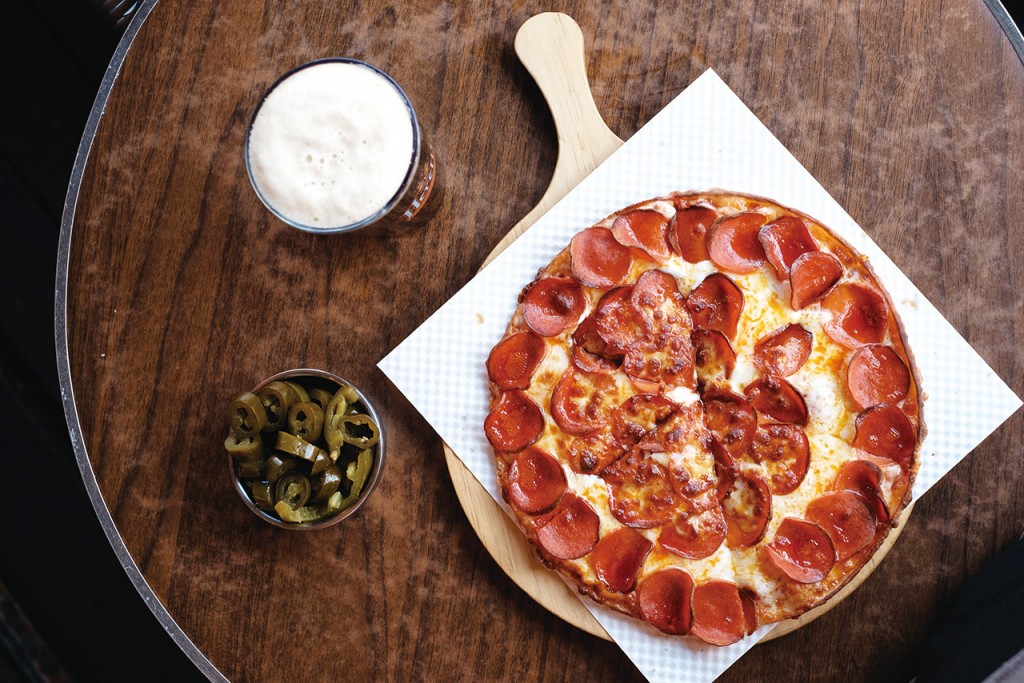 The most common way to get to Haebangchon is to walk straight from Exit 2 of Noksapyeong Station, Line 6. When you come to the end of the gingko trees you will follow the street veering left and start walking up the main HBC road.

Alternately, if you are coming from a visit to Gyeongnidan, there is both a pedestrian overpass and underpass that conveniently connect the two neighborhoods across the main street going toward Mt. Namsan tunnel.