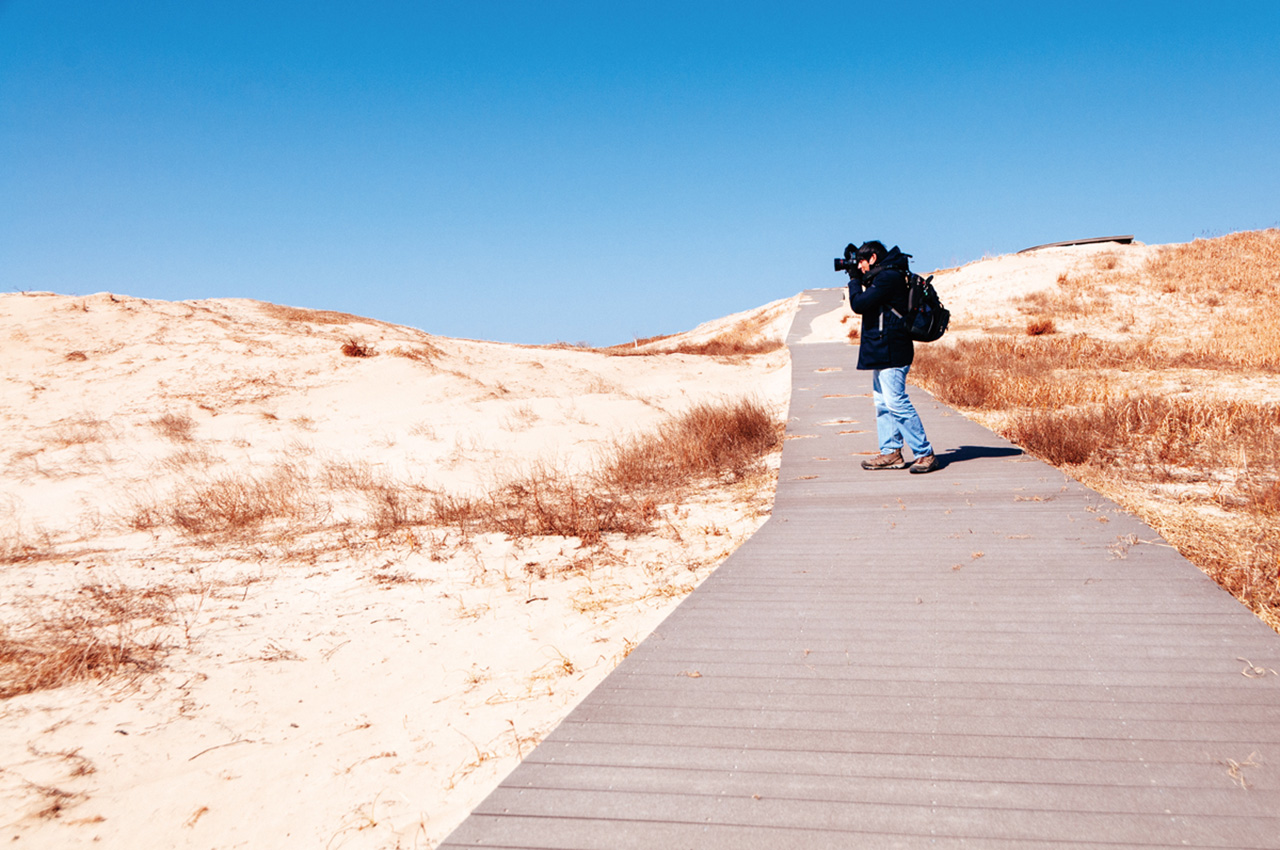 [dropcap letter=”T”]aean is a landscape birthed by the forces of wind and water.

The rugged seashore of this west coast town provides the setting for some of Korea’s most romantic sunsets, which draw thousands of day-trippers from Seoul and elsewhere. But there’s much more here than just sunsets. Taean’s imposing sand dunes, wave-wizened cliffs, mysterious forests and scenic beaches offer up unlimited leisure possibilities, especially in spring, when the tulips and lilies add a dash of color to the white sands, black rocks and azure seas.

The town of Taean can be divided into two distinct zones. To the north is the Taean Peninsula, a craggy mass of crooked fingers and narrow inlets dangling from the mainland into the Yellow Sea. To the south is the island of Anmyeondo, a popular tourist destination separated from the mainland by a narrow channel. The littorals of the peninsula and the island have been incorporated into Taeanhaean National Park, which includes not only 230 kilometers of scenic seashore but also 72 islands, 26 beaches and Korea’s only large sand dune system.

The highly irregular shoreline was produced after the last Ice Age as rising seas flooded the region’s river valleys. This resulted in the formation of many long, mountainous, fjord-like estuaries, or rias. The rias host to a wide range of ecosystems, from sandy beaches to coastal swamps, and are home to nearly 2,000 animal species, 17 endangered.

The sands and sea penises of Sinduri

To get a glimpse of the Sahara without ponying up for the plane ticket to Morocco, head to the small beach town of Sinduri, hidden in one of the Taean Peninsula’s many ria. Sinduri’s claim to fame is as home to Korea’s one and only significant system of sand dunes. These giant hills of sand were formed about 15,000 years ago, when strong Ice Age winds deposited sand from the sea unto its current location. If you don’t want to get sand in your shoes, a wooden boardwalk weaves its way through the dunes. No, it’s not the Gobi, but at 2,640,00 square meters, in spots the landscape does look positively desert-like. Behind the dunes, too, is the Duung Wetland, a rare freshwater sand marsh.

On the beach in front of the dunes, you’ll find spade-toting locals and tourists digging holes in the wet sands in search of the gaebul, a sea worm also known as the “penis fish” for its somewhat unsettling resemblance to an uncircumcised male member. To catch one, first look for the small holes in the sand – these are their burrows. Then start digging … deep. The worms, which are said to boost male stamina (no surprise there), are usually eaten raw, with a dash of soy sauce and vinegar – they taste something like chewy oysters. Bon appétit.

Also on the Taean Peninsula is Cheollipo Arboretum, one of Korea’s most beautiful botanical gardens. Founded in 1970 by American expatriate Carl Ferris Miller (1921-2002), a former naval officer-turned-banker and arborist who took Korean citizenship in 1979, the extensive seaside gardens are home to 14,000 species of plants from 60 countries, many of them collected by Miller himself over the course of three decades. Of particular note is its collection of magnolias – with over 380 kinds, it is one of the world’s largest. The magnolias are in full bloom in April.

In addition to flowers, the arboretum also offers a variety of accommodation options, including some lovely Korean-style guest houses with views of the sea. As an added bonus, the gardens are near the beautiful Cheollipo and Mallipo beaches.

If the flowers of Cheollipo aren’t enough, Taean also hosts an annual tulip festival (April 17-March 10) and, in summer, a lily festival.

GO> Getting to the Cheollipo Arboretum: Take a local bus to the arboretum from Taean Bus Terminal (travel time: 35 minutes).

Until the 17th century Korea’s sixth largest island, Anmyeondo was actually a peninsula. It was at this time that a channel began to separate it from the mainland, though it’s still unclear whether the new waterway was human-made or the result of natural flooding.

The island’s most popular tourist destination, by far, is Kkotji Beach, a seashore famous for its crimson sunsets. The area’s coastal scenery is dominated by the so-called Grandmother and Grandfather rocks, two fantastically weather-beaten crags poking out of the sea. Depending on the time of year and the angle from which you’re viewing them, the sun can appear to set between the two rocks, casting out hues of gold, red and purple in the process. You can walk all the way out to the rocks when the tide is low. Anmyeondo Recreational Forest is another one of the island’s big draws. During the Goryeo Dynasty (935-1392), the lush, natural pine forest was managed by the royal family, who valued its timber for making ships and archery bows. Today, the pines provide a nurturing setting for burnt-out urbanites to relax amid the sights, sounds and aromas of nature. Spread throughout the forest are about two dozen wood cabins and Korean-style hanok homes where visitors can spend the night, as well as a campground here for the outdoorsy types.

GO> Getting to Kkotji Beach, Anmyeondo Recreational Forest: Take a bus from Taean Bus Terminal to Anmyeon-eup (travel time: 30 minutes). From Anmyeon-eup, it’s a five-minute taxi ride to either the beach or the forest.

Some of Taean’s coastal spots are linked by a series of scenic walking trails called the Taean Haebyeongil. The paths are marked, but if you read Korean, you can prepare ahead of time by visiting ecotour.knps.or.kr/haebyeongil/index.asp.

STAY> A popular weekend destination, Taean has a wide range of rental houses and a couple of sizable resorts to choose from. The guest houses of the Cheollipo Arboretum (T. 041-672-9982, chollipo.org) are very nice places to stay, as are the cabins of  the Anmyeondo Recreational Forest (T. 041-670-2692, www.anmyonhuyang.go.kr), but you absolutely need to make reservations, the earlier the better. Near the Sinduri Sand Dunes are a number of pleasant inns, motels and rental houses, including the Sky-Sea Resort (T. 041-674-6666, www.sky-sea.co.kr). For something with more creature comforts, try the Resom Ocean Castle Aqua World (T. 041-671-7000, www.resom.co.kr), a plush hot spring resort on Anmyeondo.

EAT> As you’d expect of a seaside destination, Taean’s culinary delights tend towards the aquatic. Of particular renown are its fresh blue crabs. Gaegukji, a hearty stew of crab and kimchi, is a local specialty. You can score it at many of the restaurants near Kkotji Beach – give Seungjin Hoetjib (T. 011-9923-6616) a try. Another local specialty is baksok milguk nakjitang, a savory noodle soup made with small octopi. This dish isn’t for the squeamish – the octopi are placed in the boiling broth very much alive and in front of the diner. Most of the places that specialize in this meal are located in the fishing communities in the north of the Taean Peninsula – Iwon Sikdang (T. 041-672-8024) in Iwon-myeon and Wonbuk Baksok Nakjitang (T. 041-672-4540) in Wonbuk-myeon are quite well-known. What’s in that pick-a-nic basket?
Scroll to top