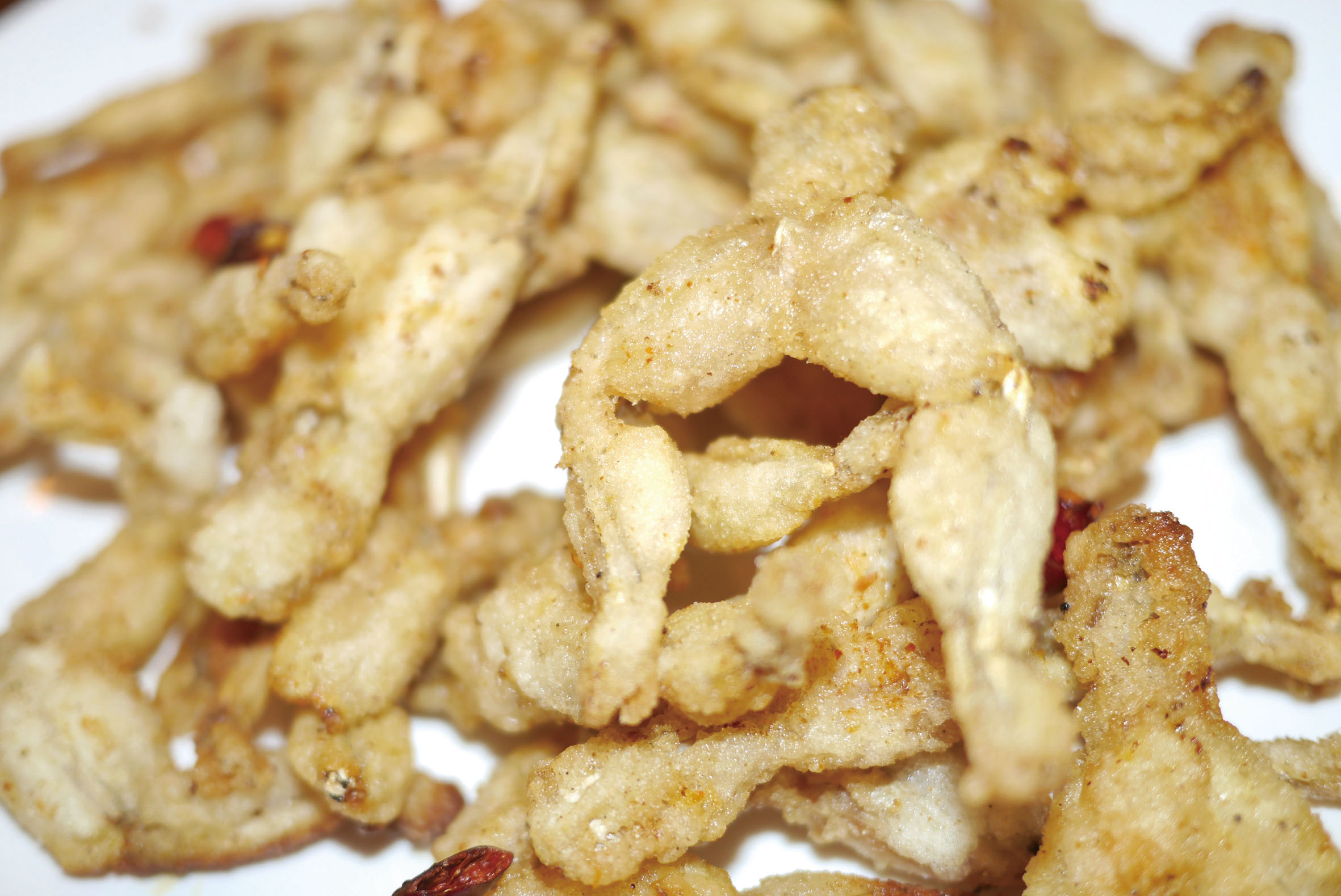 Written and photographed
by Daniel Gray[/box_dark]

Korean food might seem quite extreme to the uninitiated. Some might fi nd pork knuckles, blood pudding, head cheese, silkworm larva, and fish intestines to be disgusting, but to Koreans they are just another meal or snack and often considered delicacies. This issue we present to you some of Korea’s more adventurous eats.

The flesh of the deepwater monkfish is said to taste and have the texture of lobster. However, in Korea this fi sh is prized for it’s chewy meat and gelatinous liver. The bigger the liver, the more expensive this dish can get. Masan Agujjim in Nagwon-dong is famous for their chunks of monkfi sh in a spicy sauce stir-fried with bean sprouts and other veggies, a dish called agujjim. The monkfi sh chunks are chewy and gelatinous and full of fl avor, and the crunchy bean sprouts are very cooling. Koreans consider this deepwater fi sh a delicacy and love to enjoy the sauce with rice. I really like this place because of the quality of the ingredients, the sauce, and the simple banchan. The sauce is thick, spicy, and fl avorful, and they make an amazing fried rice with the leftovers. There are many imitators in the area, but you’ll know you found the right place when you see the place with the long queue.

The French consider cuisses de grenouilles a delicacy and consume around 4,000 tons of these spry amphibians per year. Koreans don’t eat quite as many, but they do enjoy them grilled, fried, and as a liquid (usually steeped in alcohol). It is believed that frogs are rejuvenating and good for increasing strength. A great place to get frogs in Seoul is over at Yeonsuk Yanggochi Jeonmunjeom, which is a local haunt for lamb skewers cooked over coconut charcoal. It is nothing fancy and the service is polite. The diners are locals looking for a beer and a snack after work. Their lamb is the main event, but they have a very diverse menu that includes fried frog legs. Here you can get a large platter of our jumpy friends, which are simply battered and fried till crispy. They are seasoned with a bit of red chili, which gives them a bright heat. You don’t get the whole frog here, just the torso (which makes it easier to hold) and the legs. If you’d like to be dainty, you can chew the meat off the bones, but I found that you could just as easily eat it bones and all. The taste of the frog was like that of a chicken that had gone swimming in a clean pond. I can easily see frog legs becoming a popular snack at sporting events.

I asked my Korean friends why they would want to eat something so spicy that it burns both going down and going out. They said that it relieves stress—they feel alive, and all the problems of the day burn away. Now the most popular clinic for this therapy—spicy chicken feet—is over at Hongmi Dakbal. Warning. The chicken feet here is uber spicy. It’s so spicy that your mouth will burn the entire time. I can’t really describe the flavor of it—it’s just burny. There is little meat on the chicken feet, and as you nibble, the heat ignites your entire head. The burn started from the corner of my mouth and went to my temples. From there it went to my forehead, and later it caused a sweat behind my ears. It was a painful experience, but it felt quite good after a bit. Pain so painful it is euphoric. To balance out the spiciness, the restaurant offers several different “cures.” The starch and sesame seaweed in “ugly” gimbap (motnan gimbap and jumokbap) will calm down the spice. There is also bindaetteok (mung-bean pancakes). My favorite fire extinguisher is their their steamed egg (gyeran jjim)—it’s like smooth custard, and holding it in your mouth will settle the burn. The other cure for the spice is peach juice. The pectin is believed to get rid of spice, and I have to say, it does work. If you are looking to enter a world of pain, I recommend you give this place a try.