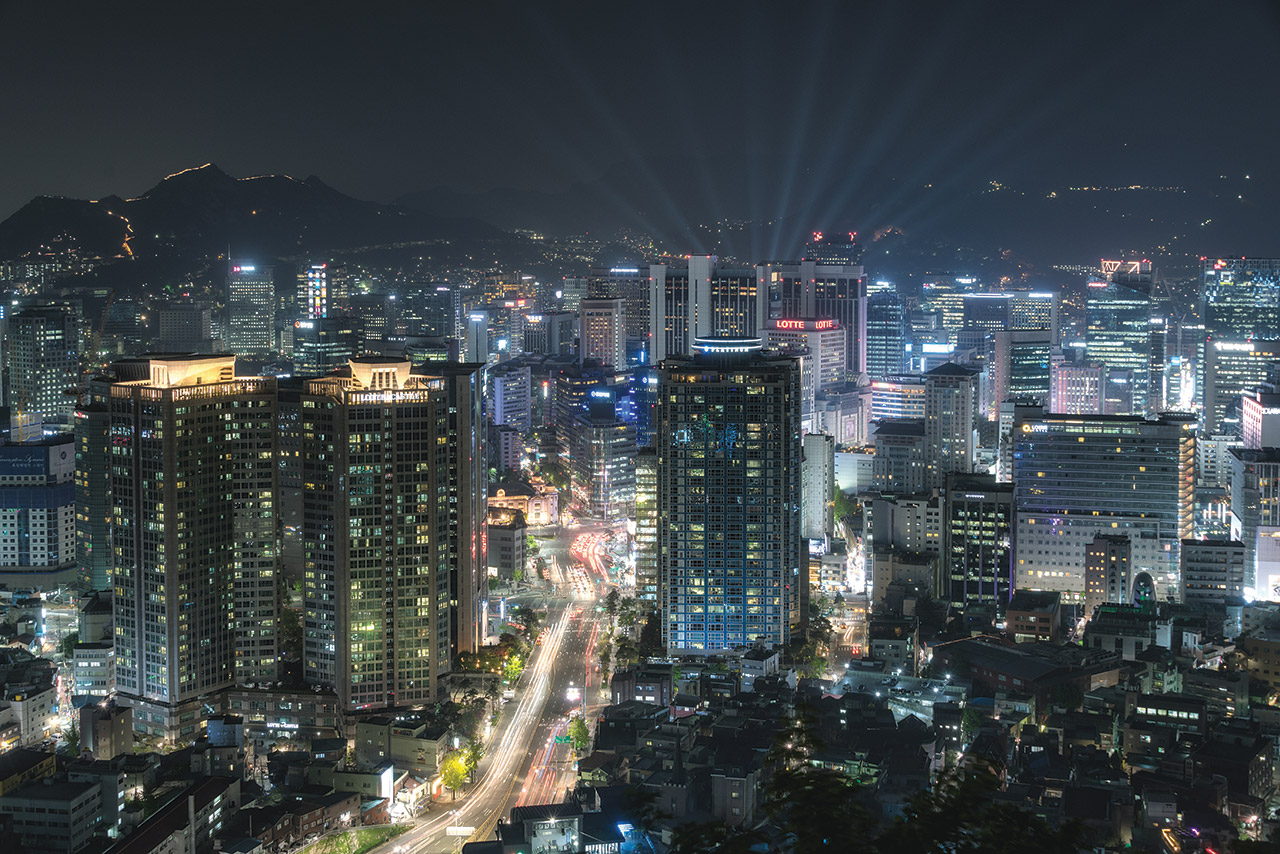 Seoul has plenty of places to enjoy the nighttime cityscape

Cities are creatures of the night.

No matter how beautiful a city may be during normal working hours, a skyline comes alive only after the sun dips below the horizon. Every city has its places to take in the nightscape. Hong Kong has Victoria Peak, New York has Rockefeller Center. Surrounded by mountains, Seoul is blessed with an abundance of excellent overlooks to take in the city’s inspiring nighttime cityscape. We introduce four vantage points located in the heart of the city.

The National Museum of Korean Contemporary History is located in the former Ministry of Culture, Sports and Tourism building in Gwanghwamun, just across from the landmark Gyeongbokgung Palace. Opened in 2012, the museum’s exhibits shed light on Korea’s dramatic and sometimes tragic modern history, from the opening of the country at the end of the 19th century to the prosperity of the present day, with pride of place given to the Korean War and the nation’s post-war economic development and democratization. In addition to its permanent exhibits, the museum also hosts regular special exhibits, lectures and other educational events.

In addition to its role as a repository of modern Korean history, the museum also functions as an observatory over the Gwanghwamun area in general and historical Gyeongbokgung Palace in particular. Located on the eighth floor, the museum’s roof garden is usually open from 9 a.m. to 6 p.m. On Wednesdays and Saturdays, however, it is open until 9 p.m., allowing visitors to take in the old downtown area’s inspiring nighttime scenery.

The best time to visit National Museum of Korean Contemporary History’s roof garden is when Gyeongbokgung Palace is lit up at night. Gyeongbokgung and Changgyeonggung palaces host regular “moonlight walking tours” during the spring, summer and autumn months. These special events, which usually last a week or two at a time, let visitors experience the charms of Seoul’s old royal residences under the light of the moon. It’s an opportunity that shouldn’t be missed.

For photographers, the moonlight tours offer an opportunity to capture the nocturnal beauty of the palace, one of the city’s most iconic sites. As the sun sets over Mt. Inwangsan and the sky turns violet, the wood halls and stone walls of Gyeongbokgung come alive in the warmth of the spotlights. Traffic races in front of Gwanghwamun Gate, the historical entrance to the palace, the old portal’s eaves glowing green, gold and red. In the distance, the outlines of Mt. Bugaksan and Mt. Inwangsan compliment the curved roofs of the palace’s grand halls below.

If you’re photographing Gyeongbokgung at night from the National Museum of Korean Contemporary History, bring both a wide-angle lens — the palace complex is quite expansive — and something with a bit of zoom to capture the details. During periods when the palace is open at night, the museum’s rooftop is popular with local photographers, so arrive early if you’d like to place your tripod in a prime spot.

Mt. Namsan: one mountain, many views While many spots in Seoul offer dramatic night views over the city, nowhere offers as many options as Mt. Namsan.

Standing 262 meters in the heart of the city, Mt. Namsan once marked the southern limits of Korea’s old royal capital in the days of the Joseon Dynasty. Today, it is one of Seoul’s most widely recognized scenic spots and one of its most popular tourist destinations. According to a 2015 report by the Ministry of Culture, Sports and Tourism, the mountain was the fourth most visited place in the city by foreign tourists, behind Myeong-dong, Dongdaemun Market and the royal palaces.

Standing in the middle of the metropolis, Mt. Namsan offers captivating views in virtually all directions. Dropping KRW 10,000 for a ticket, many visitors head straight for the indoor observatory deck of the landmark N Seoul Tower. To be sure, the views are jaw-dropping, weather cooperating, but a sunset seen through glass is not the same as one seen under the open sky. This is where Namsan’s outdoor observation decks shine. Throughout the mountain are several wooden observation decks, called “photo islands,” which offer spectacular, sweeping vistas over the city. One of the best ones is located a short walk below the Namsan cable car’s upper terminus. Overlooking Myeong-dong, the deck provides views over downtown’s urban forest, its skyscrapers bathed in fluorescent and LED light. While overgrown trees block the view a bit, what you can see between the trees is more than enough.

On the south side of Mt. Namsan, on the road connecting N Seoul Tower and the National Theater of Korea, are two wooden observation decks. The one closer to N Seoul Tower is, by far, the better of the two. From here, you can enjoy panoramic vistas over Yongsan, the Hangang River and Yeouido. On a clear day, you can see as far as World Cup Stadium. It’s also a good place to photograph N Seoul Tower itself. At night, the orange lights of Haebangchon, an old, low-rise hilltop neighborhood just below the mountain, provide a surreal contrast with the yellows and greens of the skyscrapers beyond. The other observation deck, closer to the National Theater of Korea, looks out over Hannam-dong towards Gangnam. You can enjoy yet another pleasant nighttime view at Baekbeom Plaza, near Namsan Library and the An Jung-geun Memorial Hall. A stretch of Seoul’s old city wall snakes its way down the mountain from the plaza to Sungnyemun and Namdaemun Market. Lit up at night, the historical wall contrasts sharply with the futuristic skyscrapers beyond, a microcosm of Seoul’s defining tension between old and new.

With its unobstructed views of downtown, Mt. Namsan, Bukhansan National Park, the Hangang River and the city beyond, the peak of Seodaemun’s Mt. Ansan is arguably the best vantage point in Seoul. It may also be one of the least known. While within easy walking distance of Yonsei University and Seodaemun Prison History Museum, Mt. Ansan is not as accessible as the other locations mentioned here. Getting to the vantage point requires a hike to the top of the 300-meter-high mountain. The 30-minute walk along mostly gentle, well-maintained trails won’t trigger traumatic memories of scaling Annapurna, but it’s not the simple bus, taxi or cable car ride needed to reach the other viewpoints in this article, either.

The peak of Mt. Ansan is crowned by an old beacon fire station, or bonghwadae. The Joseon Dynasty maintained a national system of beacon fire stations to warn the capital of impending threats. While Mt. Ansan’s beacon fire station, a reconstruction, no longer functions, it does function as an excellent observatory. For the photographically minded, the stone station also provides a nice, stable platform on which to put your tripod. Begin your hike in the late afternoon, when there is still plenty of light to illuminate the path. When you reach the beacon fire station, just sit back with a thermos of coffee and wait for the show to begin. As the sky turns violet to blue to eventually black, the city below awakens, transforming into an ocean of artificial light. On a clear day, you can see all the way to Jamsil, the landmark Lotte World Tower rising out of the distance like a rocket on its launch pad. On hazy days, the lights diffuse, bathing the city in a ghostly fog of fluorescent and LED luminescence.

With its sweeping, 180-degree views of Seoul, Mt. Ansan is a good spot to take stunning panoramic photos of the city. You’ll want to bring a lens that lets you zoom into the city, especially the area around Mt. Namsan. Besides nightscapes, Mt. Ansan is also one of Seoul’s best sunrise spots in winter, when the sun rises directly over downtown Seoul.

While lights illuminate much of the path to the peak, the section at the very top is dark, so be sure to bring a flashlight for the hike down the mountain. During the day, the mountain is a popular park for local residents and students from the nearby universities. A network of easy hiking paths, the Ansan Jarak-gil, rings the mountain’s waist. When the weather is good, these paths — really a system of wooden decks — are an oasis of green in the heart of the concrete jungle. You’ll get some good views, too. In the days of the Joseon Dynasty, Mt. Naksan was one of the four guardian mountains of Seoul, along with Mt. Bugaksan, Mt. Inwangsan and Mt. Namsan. The mountain got its name, which translates as “camel mountain,” because the massif was said to resemble a camel’s back. The peak, which marked the eastern limit of the city, was already a popular scenic spot in the Joseon era, when local aristocrats built villas on its slopes. Seoul’s old city wall, which protected the city from attack, ran along the entirety of the mountain’s ridge line.

Today, Mt. Naksan is a popular leisure spot for local residents and tourists. Overlooking the Daehak-ro district, a lively neighborhood of theaters, cafes and restaurants, the mountain is crowned by Naksan Park, a green space with views of downtown Seoul, Dongdaemun, the hilltop neighborhood of Changsin-dong and Mt. Namsan. Many locals come here to do a bit of exercise and get some fresh air. It’s a very pleasant spot, especially in summer, when you can sit back and enjoy the cool breeze. Mt. Naksan’s real draw, however, is its preserved section of the old city wall. The Naksan segment runs from the landmark Heunginjimun Gate, a.k.a. Dongdaemun, to Hyehwamun Gate. Its granite wall, which snakes along the entire ridge, is lined by easy walking paths. Architectural lights illuminate the historical wall at night. Under the moonlight, it looks like a shimmering dragon, slithering through the undulating landscape. The beautiful spot frequently appears in TV dramas and films.

While Naksan Park provides excellent views at night, so does Ihwa-dong Village, a hilltop community on the mountain’s western slope. Originally a working class neighborhood, Ihwa-dong has gentrified due to its many colorful murals, the result of a public art project that was either a raging success or a bane on the locals, depending on who you ask. Its alleys are now filled with workshops, museums and cafés as well as homes, although many of the businesses close at night out of respect for the locals. Nevertheless, its an interesting place to walk around at night. One spot in the village that is popular with nightscape photographers is the so-called “Ihwa-dong P-turn,” a p-shaped twist in the road that lends itself to long-exposure photography when cars pass through — a 30-second exposure usually suffices. Not Another High Line 서울로 7017

On the Open Road 서해안 오토바이 여행
Scroll to top